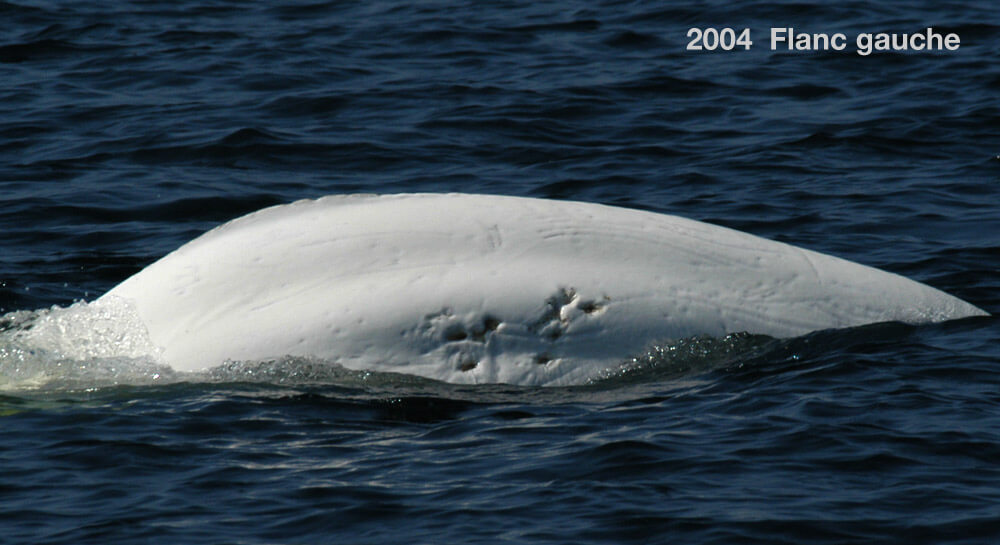 DL0098’s name, Cumulus, originates from the cloud-like silhouette formed by its multiple small scars on the left flank. It has no markings on the right flank, but the details of its dorsal ridge are sufficient to identify it. 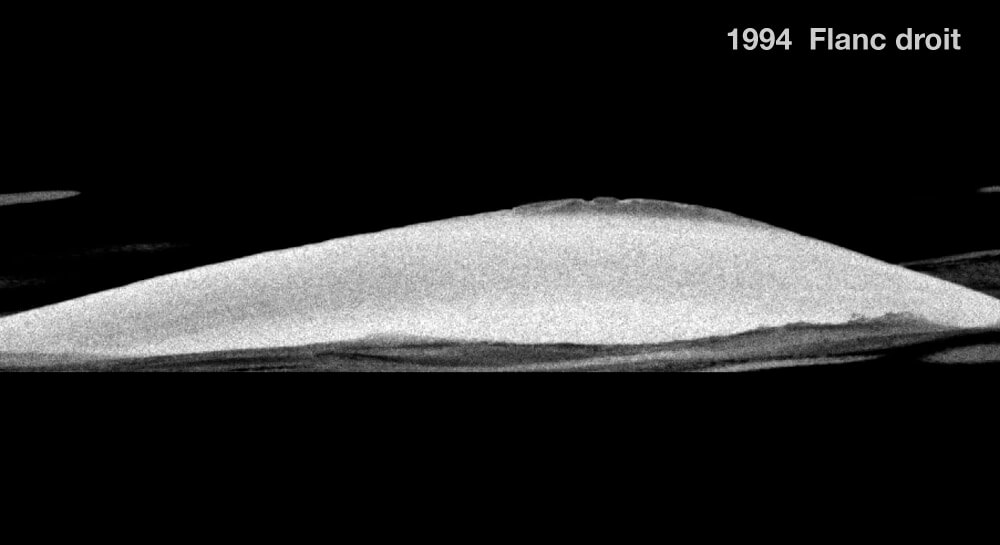 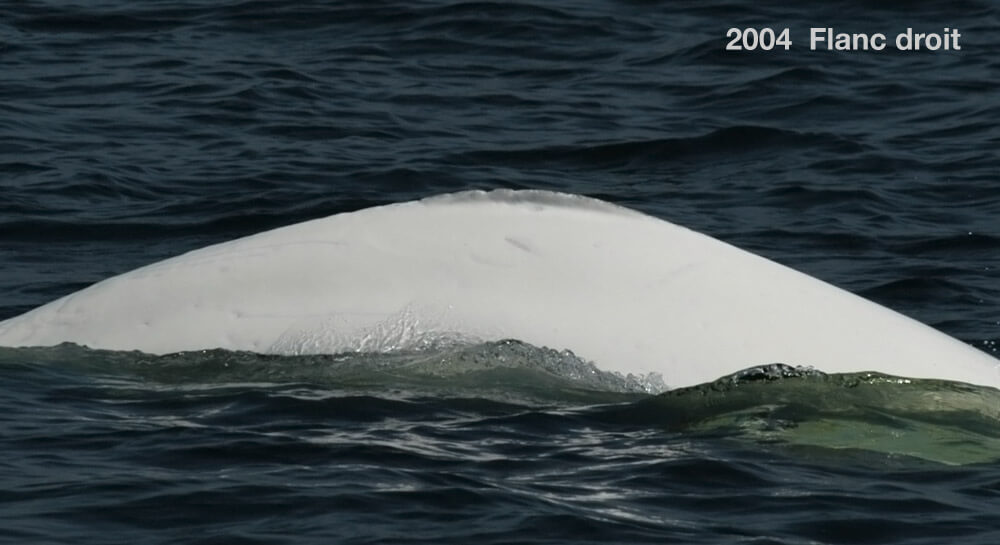 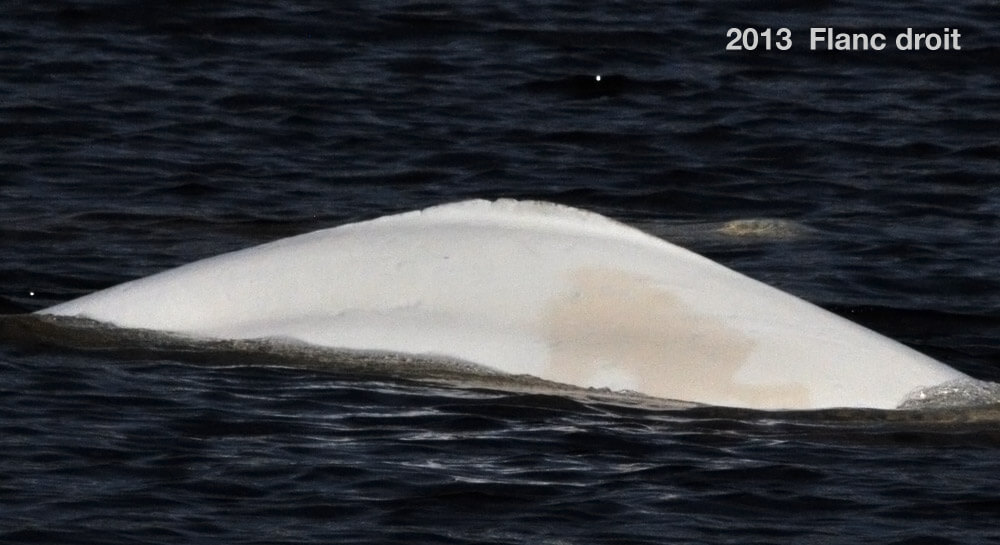 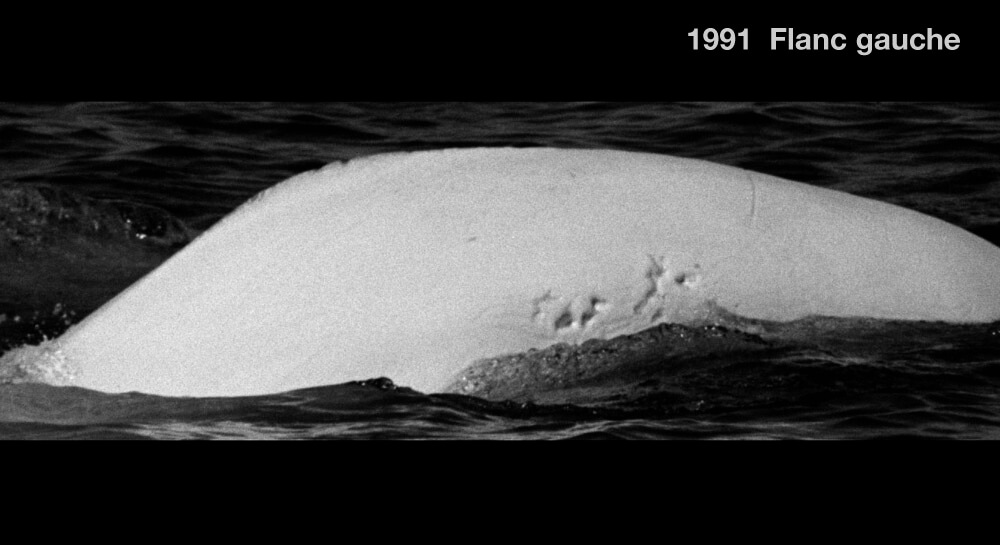 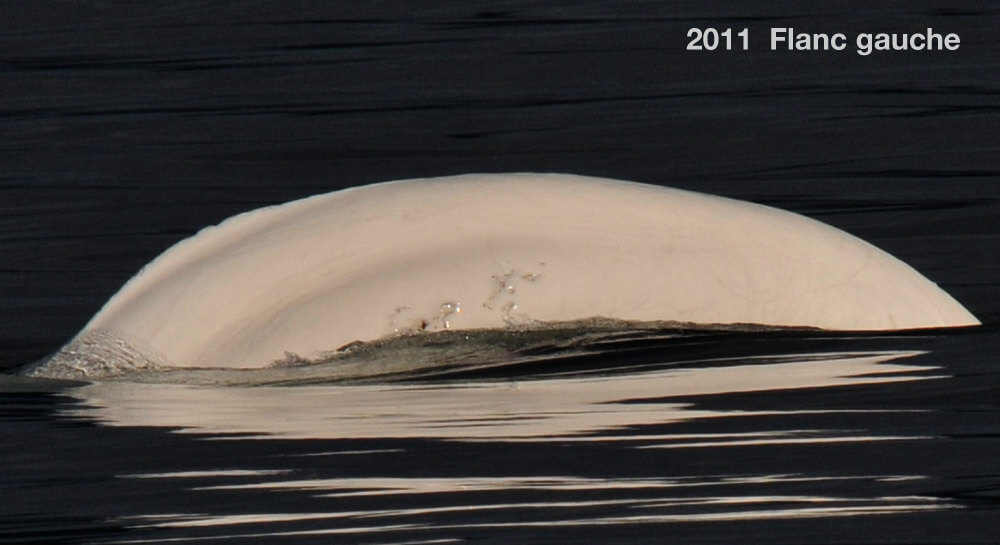 Our first encounter with Cumulus goes back to the summer of 1980. He was already completely white back then, meaning he was born before 1968.

Cumulus is a male. His sex was confirmed by a biopsy, a genetic analysis of a tiny piece of skin taken from his back. He is part of one of the two networks of males that frequent the Saguenay Fjord and its mouth.

On October 10, 2007, around 2 p.m., Cumulus is seen by the team at the exit of Saguenay. He is in a huge flock of more than 200 individuals, adules and “teenagers”. They are very active, moving in all directions and are flown over by swarms of Bonaparte’s gulls.

The mouth of the Saguenay is a meeting place! Networks of male belugas cross paths with networks of females and their young. Large herds form there, in a short-lived way, because of the high number of food. It is also the meeting place between the salty waters of the Lower Estuary and the brackish waters of the Saguenay. The topography, currents, tides and characteristics of the water masses that meet create very specific oceanographic conditions that trap prey attracting predators such as belugas.

The weather conditions are difficult in the estuary today; the wind blows strongly and the waves are big. We take the direction of the Saguenay fjord, where it is calmer. We look for belugas by going up the fjord until Saint-Marguerite Bay, their usual terminus in the Saguenay.

In the bay, we see Cumulus in a small herd of seven individuals. The herd is composed of adults, probably males if their size is anything to go by. Cumulus is swimming with the male DL0151. Before the animals left the bay to go back to the mouth, we managed to take a picture of them.

On October 2, 2013, we decide to go to St. Margaret’s Bay in the Saguenay Fjord. On site, we see Cumulus among a group of seven belugas. The group is composed exclusively of white animals, adults, probably only males. The observation was short-lived, as the animals quickly left the site.