An agile swimmer with a voracious appetite…and oh-so dynamic!

A clever strategist when it comes to capturing its prey, the smallest of rorquals performs spectacular acrobatics on the surface. In the St. Lawrence, minke whales are often found near the coasts. Moreover, they sometimes breach repeatedly! They are thus revered in the Estuary by the whale-watching industry and landlubber observers alike. Amongst the great cetaceans, this species, which was of little interest to the whalers of yesteryear, is today the most abundant in the world. But for precisely this reason, it is the primary target of countries that still practise commercial and “scientific” whaling.

From March to December, the minke whale frequents the coastal waters of the St. Lawrence Estuary and the Gulf of St. Lawrence to feed. In the Estuary, it is particularly present at the head of the Laurentian Channel (between Tadoussac and Les Bergeronnes) and at the mouth of the Saguenay River where it is plentiful from early July to early September. Certain individuals reside in the Saguenay up to 10 or so nautical miles upriver. The population of the Gulf (excluding the Estuary) was estimated at 1000 individuals (per aerial surveys conducted by Fisheries and Oceans Canada in 1995 and 1996, which did not account for animals below the surface).

Seasonal movements are not well understood. Observations as well as acoustic recordings made by the US Navy surveillance system, suggest that minke whales migrate south in winter to the Caribbean (between November and May). In spring, without ever banding together, they travel back up the US Coast and past Bermuda to return to their summer feeding grounds.

The minke whales of the St. Lawrence are part of the Canadian East Coast stock (estimated at about 4,000), one of four stocks of the North Atlantic population (200,000). From the tropics to polar regions, this species is found in all ice-free waters of the world’s oceans, and sometimes in areas where there is a lot of ice in Antarctica. The minke whale of the Northern Hemisphere is distinct from the dwarf minke whale, which is a sub-species of the Southern Hemisphere. The Antarctic minke whale is a distinct species with numerous physical and genetic differences.

In April 2006, COSEWIC attributed the minke whale population of the North Atlantic a conservation status, namely that of a species “not at risk”, on account of mortality (attributable to Man or other potential threats) levels not exceeding replacement levels. The species does not appear in the List of Endangered and Threatened Wildlife in the United States, and is designated “least concern” in the IUCN’s Red List.

Minke whales have a very varied diet depending on the feeding area, the season and the availability of prey. During the summer months, minke whales probably spend nearly half of their time hunting and feeding. It is a gulper, feeding on planktonic crustaceans (krill) with a preference for small schooling fish (herring, capelin, sand lances). A large number of faithful individuals, likely associated with a territory, return year after year, specializing in certain types of feeding manoeuvres. Minke whales are frequently observed surface feeding, where they perform characteristic manoeuvres during which one can catch a glimpse of their expanded pink-skinned throat. They swim in circular, elliptical or hyperbolic paths to trap their prey while using currents, rock walls and sometimes even the hulls of boats. It jumps out of the water and lands noisily on its belly or side (ventral and lateral arcs). The Meriscope team even observed a minke whale suddenly turning around on its back, its pectoral fins almost emerged, to swallow the prey trapped between its belly and the surface of the water. These manoeuvres are believed to be chosen as a function of the density of the prey and even the species.

They generally come to the surface for 2 or 3 blows. It strongly arches its back before diving again and does not lift its tail out of the water. Minke whales can execute vertical breaches before landing on their belly or back. Series of several dozen repeated breaches at short intervals are regularly sighted, leaving observers dumbfounded. Minkes sometimes show a certain curiosity with boats, surfing in the large waves in their wake.

The diving behaviour of the minke whale is not well documented. Their dives probably do not exceed a depth of one hundred or so metres, as this is the layer where their prey are found. Dive times are generally short (2 to 3 minutes), but can be in the range of 20 minutes.

The social structure of minke whales is complex due to segregation according to sex, age and reproduction conditions. In the North Atlantic in summer, bulls migrate to the high seas farther north, with cows preferring the more southerly coastal waters and juveniles remaining at lower latitudes still. Likewise, in the St. Lawrence Estuary, the majority of minke whales are females. These animals are rather solitary. Even in areas with abundant prey where 30 or even 60 or so individuals might congregate, stable associations are not observed. Individuals may pair up for a very brief period (2 to 4 breathing sequences).

The minke whale produces low-frequency sounds (80 to 200 Hz), with a repertoire comprising vocalizations of decreasing frequency. According to one study, it might use a series of high-frequency clicks (7,500 Hz). In the Estuary, minkes seem to vocalize less than fin whales.

Sexual maturity is reached between the age of 6 for females and 7 for males. Mating takes place between October and March. Gestation lasts about 10 months and calving takes place between November and March. Nursing lasts 4 months. Mother/calf pairs separate as soon as the latter is weaned, which is generally before reaching their summer feeding grounds. This bond between the cow and her calf is the shortest of any Mysticeti whale.

In the St. Lawrence, the ORES research team was studying minke whale behaviour from 1998 to 2015 and has managed a catalogue of some 300 individuals using photo-identification of their dorsal fins (shapes and markings) and other distinctive characteristics. Today, the Meriscope works on Minke whales, with photo-identification, acoustics and toxicology.  In some aspects, the minke whale is still poorly understood, as research conducted in the St. Lawrence is generally geared toward species at risk. 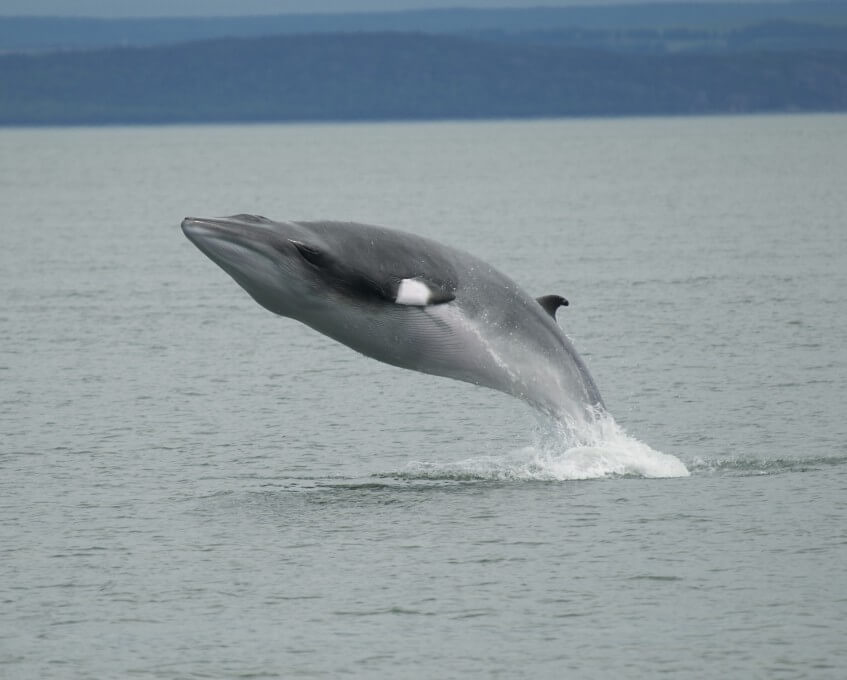 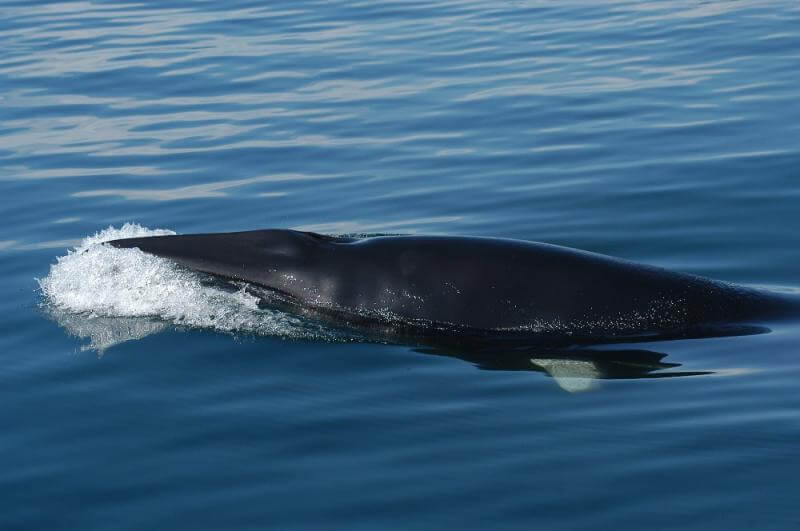 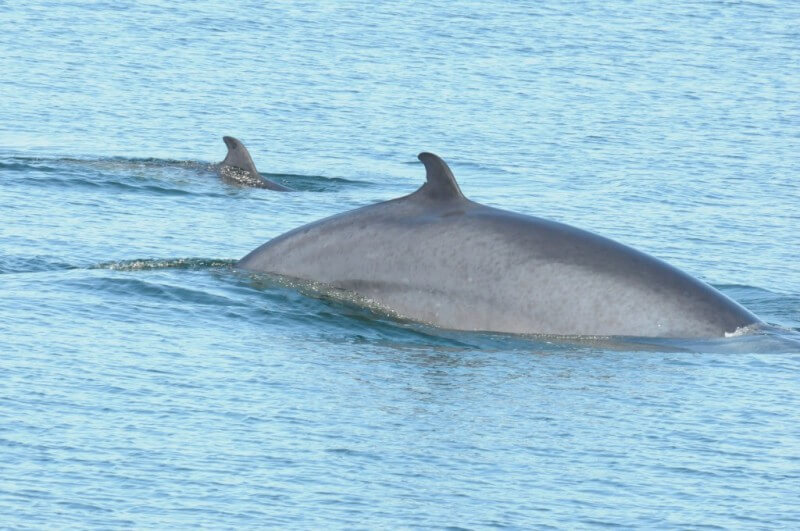 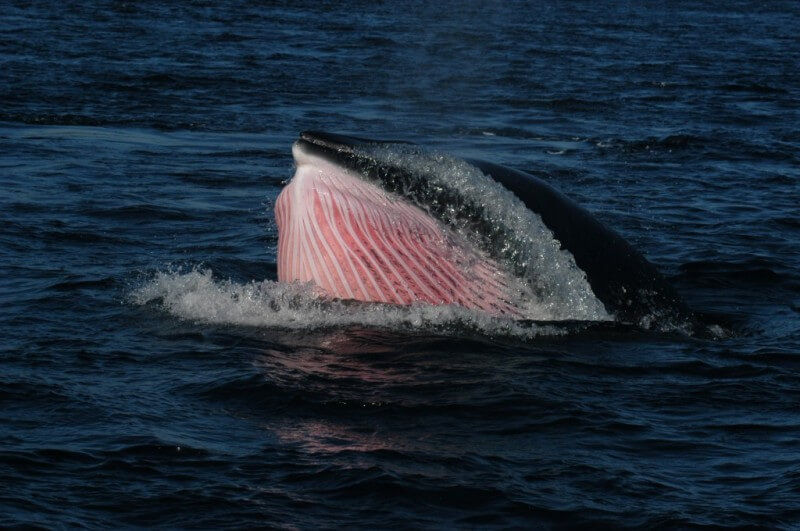