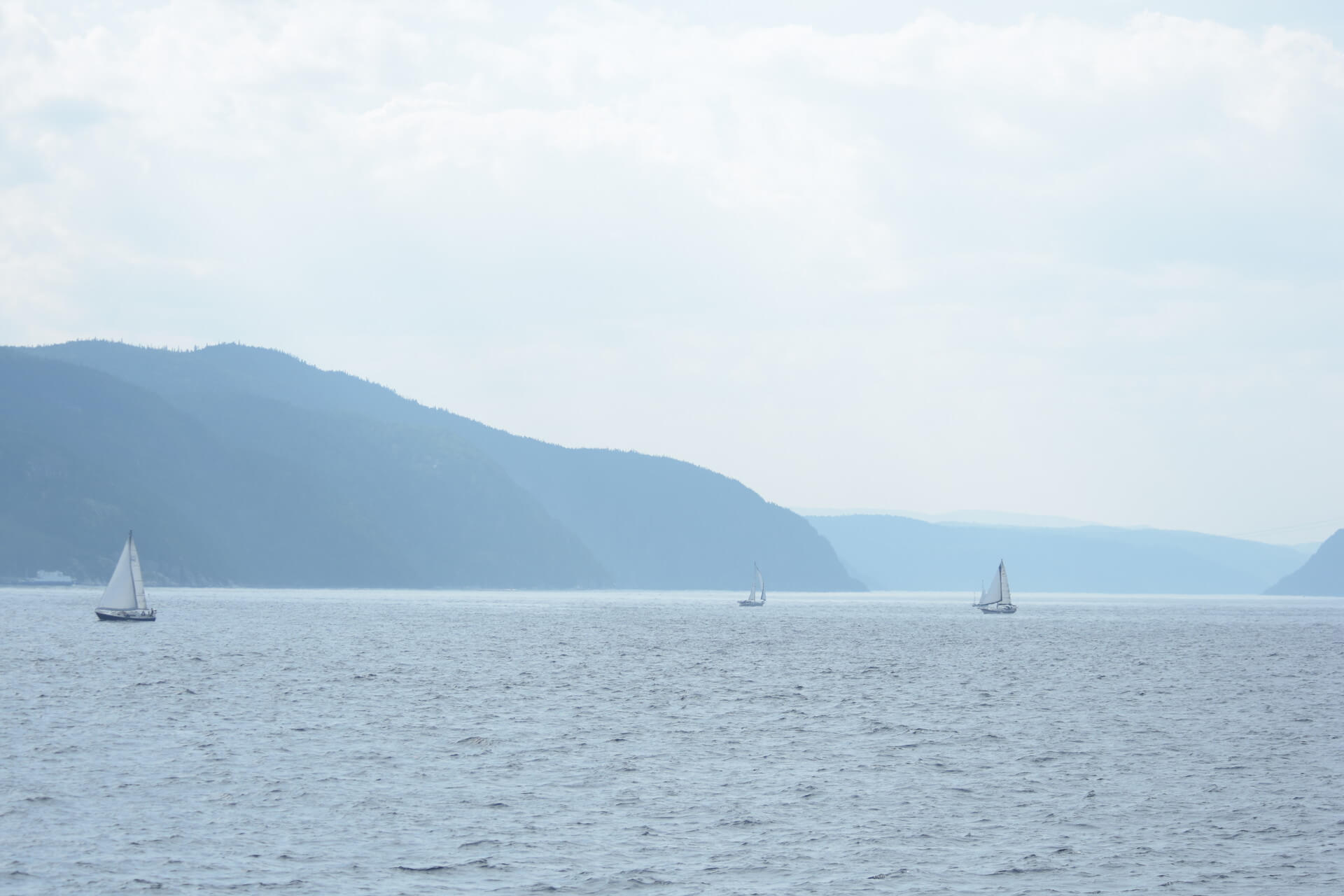 The St. Lawrence River originates in the Great Lakes on the border between Canada and the United States. Stretching 2,000 km (excluding the Great Lakes), the watercourse is divided into three sectors: the River, the Estuary and the Gulf. The Saint-Lawrence alone collects 1% of the rainwater that falls on the planet. Tides begin to be observable from Lac Saint-Pierre, just before Trois-Rivières.

The St. Lawrence River is divided into three sectors: the fluvial sector, the estuary and the Gulf. They are distinguished by their depth, salinity and currents. They therefore shelter different aquatic fauna and flora.

The Fluvial sector is the shortest and the shallowest of the three sectors. The water is fresh and the tides are absent. Normally, no marine mammals should be found in these waters.

The Estuary begins at Île d’Orléans, where salt water from the ocean mixes with the fresh water of the river. As the density of salt water is not the same as that of fresh water, two layers of water are created. The water reaches full salinity at the head of the Laurentian Channel, near Tadoussac. The abrupt rise in the Channel’s seabed produces significant upward flows of cool water that mixes with the more temperate surface waters. Driven against the current from the Atlantic toward the Gulf of St. Lawrence, deep salt water is pushed up to the surface by the Gaspé current and the influence of the tides. This phenomenon is called upwelling, and the result is a dazzling array of marine life. The St. Lawrence Estuary is one of the largest and deepest estuaries on the planet. The estuary is home to belugas all year round. In summer, the estuary also hosts rorquals and other species of toothed whales that benefit from the abundance of krill, capelin and other small fish.

The Gulf begins at Pointe-des-Monts, where the river widens into an inland sea that opens out into the Atlantic via the Cabot Strait, (south of the island of Newfoundland) and the Strait of Belle Isle (north of Newfoundland). Whales and seal can be found in the gulf.

The Laurentian Channel is a deep submarine valley, measuring approximately 450 m deep from the Cabot Strait (at the entrance to the Gulf) to the Estuary and about 300 m deep to Les Escoumins. At Tadoussac, the valley reaches a shoal with a depth of about 20 m. This is the head of the Laurentian Channel.

It is these upwellings that explain the high productivity near the mouth of the Saguenay. Phytoplankton on the surface proliferates through the influx of nutrients from upwellings and light energy from the sun. As the basis of the food chain, phytoplankton favours the accumulation of zooplankton and fish, which serve as food for marine mammals. 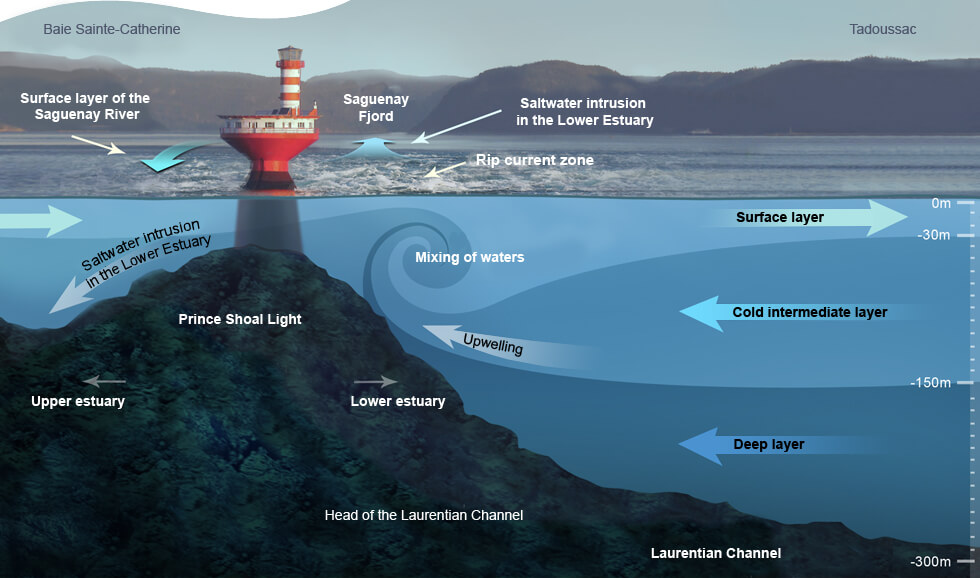 The ramp down to the floating docks formed a gentle slope, and now, three hours later, the descent is much steeper. The rocks out on the tidal flats have multiplied. A green strip marks the base of the cliffs of the Fjord. The tide is falling!

The gravitational pull of the Moon “lifts up” the oceans. This liquid bulge is constantly drawn toward the Moon. Because the Earth rotates, alternating high and low tides are observed. The Sun also influences the tides, though to a lesser extent due to its distance. If it is aligned with the Moon, stronger tides known as spring tides are observed. This phenomenon coincides with the full moon and the new moon. Conversely, when the Sun and the Moon are perpendicular, we observe neap tides. This phenomenon coincides with the first and third quarters of the moon.

The characteristics of the Earth’s and the Moon’s movements (time of rotation, angles, etc.) mean that there are generally two high tides and two low tides per day, that their heights vary, that the tide schedule shifts by 50 minutes a day and that tides are particularly pronounced in the fall and spring. However, the reason why we observe stronger tides in the Estuary than in the Gulf of St. Lawrence is much more… down to earth! Coastal topography creates a funnel effect, which magnifies the swell of the tide.

Each year, the Canadian Hydrographic Service (Fisheries and Oceans Canada) publishes tide tables based on computer analysis of the characteristics of a typical year. These predictions are accurate to within plus or minus 15 minutes and to within 30 cm. If we disregard the influence of the stars, these predictions are precise to the minute and centimetre. What is it that throws off the clock? The weather! A spectacular example: in the winter of 2003, a high tide simply failed to occur in the St. Lawrence due to a drop in atmospheric pressure off the coast of Newfoundland and Nova Scotia.

The tide influences the distribution of fish and plankton, and whales alter their behaviour to feed on them more efficiently. But these behaviours are not predictable enough to publish a “whale chart” indicating where and when to observe them!