The greatest giant of the sea

Not to mention the largest animal ever to have roamed our planet! Observing a blue whale – powerful and majestically elegant – is always a special moment. But also because it is rare and fragile. In the North Atlantic, the blue whale population was decimated by relentless hunting which ended in 1955. Since 2002, the species has been classed as endangered in Canada. For researchers, it embodies many mysteries, with its study made all the more challenging by the fact that these whales are epic journey-makers.

The blue whale frequents deep, cold waters, in sectors where the mixing of surface waters (thermal fronts, upwellings) increases the productivity and aggregation of prey. It is a seasonal summer resident of the Gulf and Estuary, where its abundance peaks in August and September. It can sometimes be observed very close to shore. Some individuals return to their feeding site regularly (nearly every year), others more sporadically. They can cover great distances in little time. According to observations and monitoring conducted by MICS, one blue whale travelled 400 km in 2 weeks and the longest journey observed was made in the summer of 2007 by an individual that trekked 180 nautical miles (324 km) in 6 days.

The seasonal movements and wintering grounds of the blue whale are still poorly known. The species’ itineraries are thought to revolve around the concentrations of their prey. These journeys are believed to take them to lower and more temperate latitudes in the winter (their reproduction season) along the East Coast of the US (Gulf of Maine to Florida). In 1993, using acoustic shadowing, the path of one individual was tracked from the Grand Banks of Newfoundland to Bermuda. Some individuals seem to extend their stays in the food-rich waters of the St. Lawrence as long as possible, staying close to the edge of the ice cover, at the risk of becoming trapped. Some of them may therefore remain all winter, as observations made in the Estuary and Gulf suggest. During an aerial survey, MICS was able to photograph and identify a blue whale off the coast of Port-Cartier among the seal-inhabited ice sheets, the first such sighting ever made in winter in the St. Lawrence.

The blue whales of the St. Lawrence belong to the North Atlantic population, which is estimated at between 600 and 1500 individuals. According to the Committee on the Status of Endangered Wildlife in Canada (COSEWIC), only 250 mature individuals frequent the waters of Eastern Canada. A genetic study currently being conducted will allow to confirm whether there is a single population or in fact two: that of the Northwest Atlantic and the one off the coast of Iceland. Blue whales are present in all the world’s oceans. They frequent coastal waters and the high sea.

The blue whale was designated “endangered” by the Committee on the Status of Endangered Wildlife in Canada (COSEWIC) in 2002. Its “endangered” status was reinstated in 2012. Despite the end to hunting in the 1950s, blue whale populations do not seem to have recovered. Various threats to this species include pollution, bycatch in fishing gear, collisions with ships, disturbance caused by a growing whale-watching industry and long-term climate change which might be influencing the abundance of its food (zooplankton).

The blue whale is a gulper, feeding essentially on small planktonic crustaceans called krill that live in schools. It consumes up to four tonnes a day, which corresponds to about 4% of its weight.

Breathing sequences generally consist of 3 to 4 blows. Blue whales sometimes feed on the surface by means of characteristic manoeuvres, namely rolling onto their sides, revealing their expanded throat, pectoral fin and one tail fluke. When they dive, certain individuals (about 15-18% of those frequenting the St. Lawrence) raise their tails.

Dives generally last 10 to 15 minutes, and occasionally up to 30 minutes. They can reach depths of 200 m, with most being made between the surface and about 100 m, the depth at which their prey are found during the day.

Rather solitary and nomadic, blue whales travel in pairs or in small temporary groups. The nature and duration of these associations are not known. In the St. Lawrence, it has been observed that stable pairs – lasting a day or even several weeks – are formed beginning in July. These pairs are most often male/female duos. This pairing is believed to be a precursor to reproduction, which takes place in winter.

These vocalizations are composed of low-frequency (11 to 125 Hz) sounds lasting between 1 and 13 seconds. Infrasounds (8 to 20 Hz) consisting of a single note can be as long as 30 seconds. They are very intense and their volume ranges between 186 and 198 dB. The sounds may be organized in sequences and repeated over variable periods of time. They travel hundreds of kilometres in the deep waters and can serve either as a means of communication for widely dispersed animals in the ocean, or may help whales “read” the seascape and underwater relief to orient themselves during their long journeys. They may play a role in their mating rituals. Geographic variations in sound patterns may be linked to different stocks or sub-populations. In the St. Lawrence, the uniqueness of blue whale vocalizations suggests an adaptation to the high sound levels of their environment caused by maritime traffic.

Sexual maturity is reached at about 10 years. Mating and calving take place in late fall or winter, with gestation lasting 10 to 11 months. Nursing lasts 7 months. Since 1979, around 30 mother/calf pairs have been observed in the St. Lawrence.

Since 1979, MICS, which fine-tuned the individual identification method based on skin pigmentation patterns, has managed a catalogue of 420 blue whales for the St. Lawrence. Other projects are being pursued by other research teams in the Estuary and Gulf, notably in the areas of acoustics, population dynamics and diving behaviour. 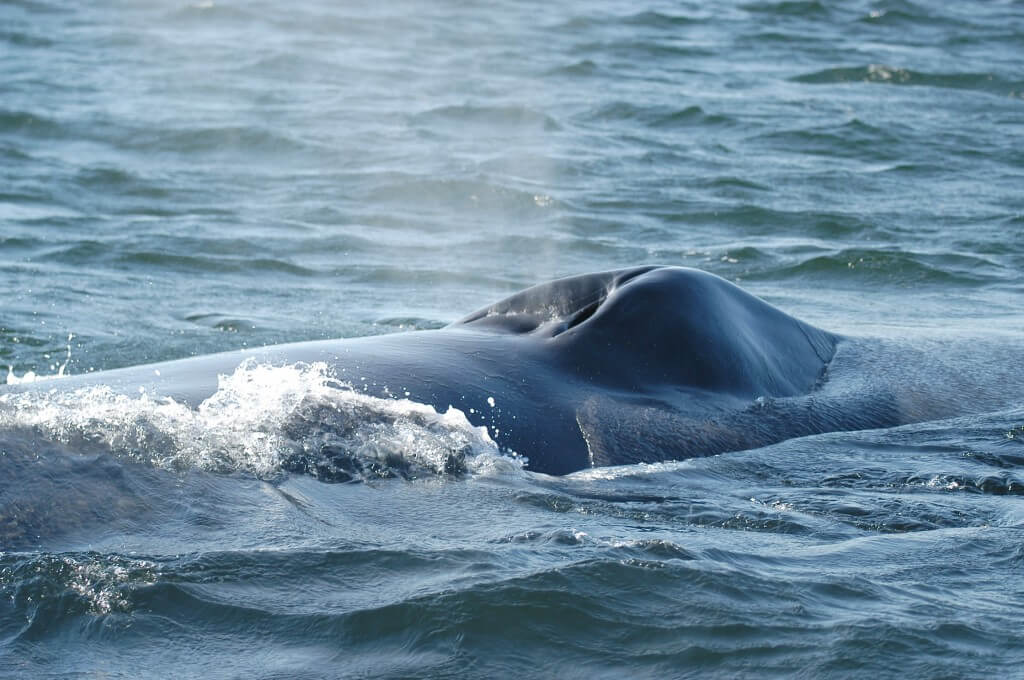 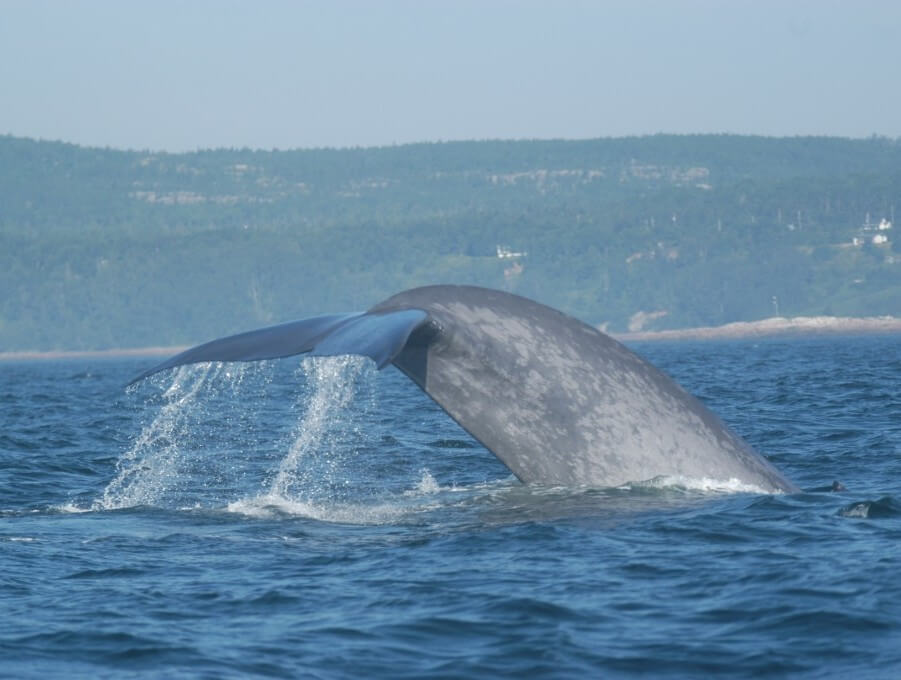 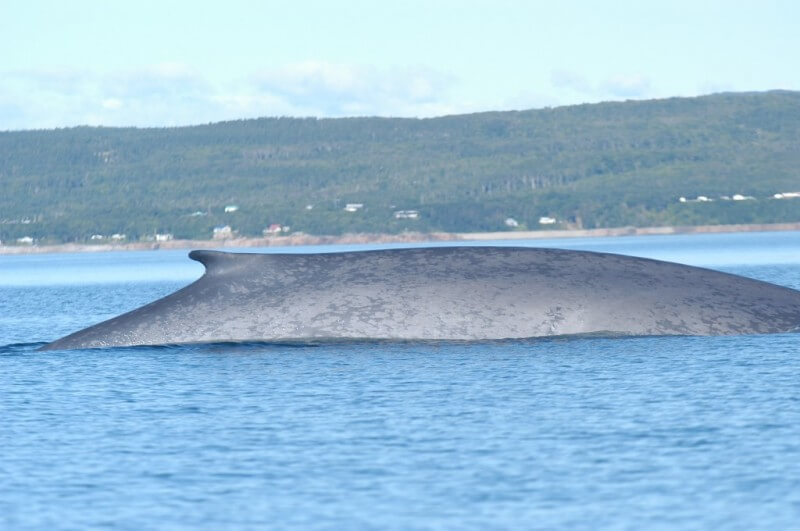 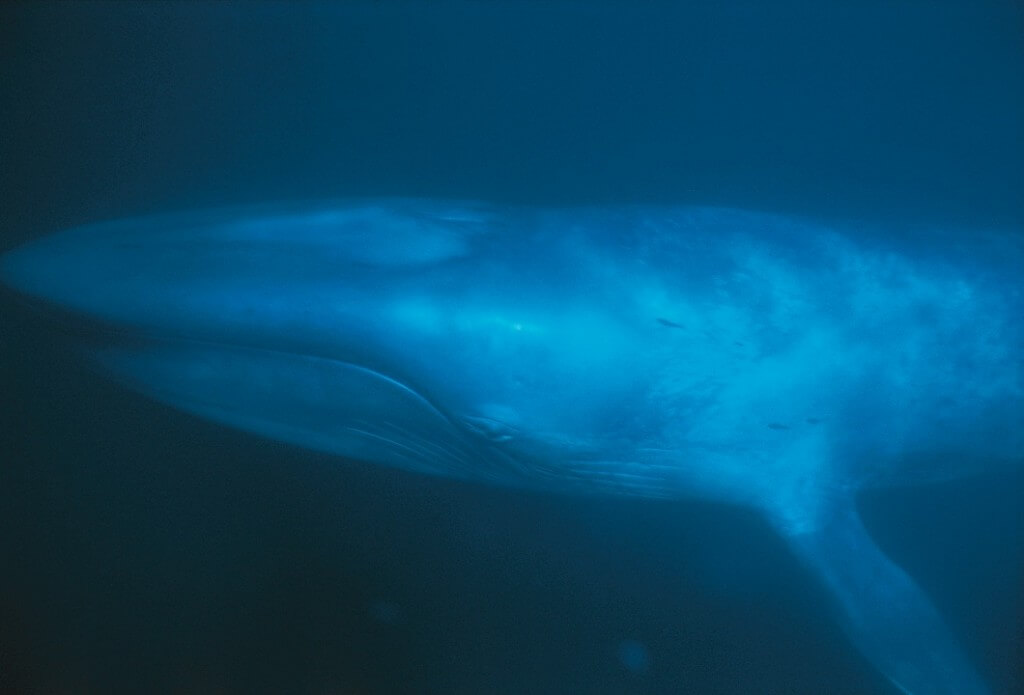