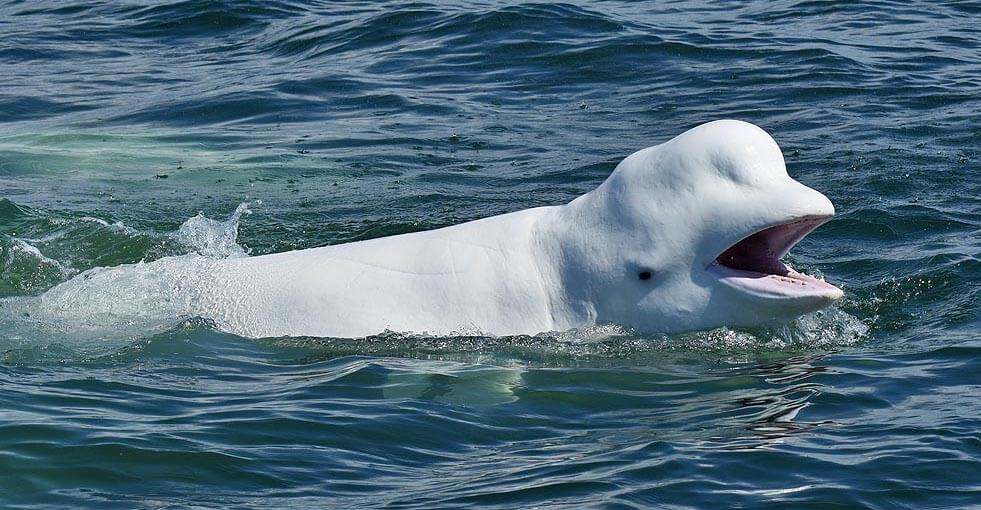 Most of the time, cetaceans surface, spout, swim and disappear. But occasionally they surprise us with more spectacular behaviours.

To feed, rorqual whales engulf huge quantities of water containing small prey such as fish or krill. Their throat then expands like an accordion. Certain manoeuvres, notably those of minke whales, cause prey to regroup and often culminate in dynamic movements. Large rorquals also sometimes surface feed: tipped onto their side, this is the chance to see, amid the turbulent waters, their bulging throat, half of their tail and one of their pectoral fins emerging from the surface.

With its spectacular leaps out of the water, the humpback whale is the champion of breaching. It is estimated that this dazzling behaviour represents the maximum physical exertion of the whale. Imagine then when this feat is performed in succession, up to 130 times in 75 minutes! During a dorsal breach, 90% of the body leaves the water after breaking the surface at 15 knots, all on an axis of 30° from the vertical, then a half-twist in the air and the whale lands on its back! … a landing on the underside and it’s a “bellyflop”. These leaps should not be confused with porpoising, which is a series of horizontal jumps performed at high speed by numerous smaller species of whales. It is thought that this behaviour helps whales swim faster while minimizing energy losses, since it is easier to slice through the air than it is the water. As for “lobtailing”, this consists of repetitively and noisily slapping the tail on the water surface.

According to a study by American researchers, breaching could also improve the diving ability of young humpback whales. Indeed, the physical effort to achieve this feat would influence the production of myoglobin. Myoglobin carries and stores oxygen in the muscles of vertebrates. Among marine mammals, it is particularly abundant and would be the key to the success of their dives.

All these behaviours are believed to be associated with social activities: play for the youngest, seduction and defiance for males during the mating season, grouping together prior to migration and, of course, communication. These highly diverse breaches and percussions are observed more frequently during adverse weather conditions. They may serve as a means of enhancing communication, as wind and waves tend to muffle the whales’ vocalizations. Breaching may also facilitate breathing when the seas are rough!

Spies from another world

A head slowly emerges perpendicular to the water’s surface and remains there for a short while: you’ve become an object of curiosity via “spyhopping”. Sometimes, a whale will instead swim slowly around a craft, passing under the hull again and again, and rolling onto its side to take a peak at the surface… 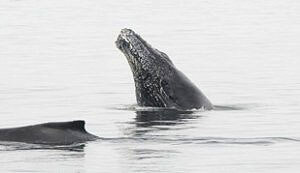