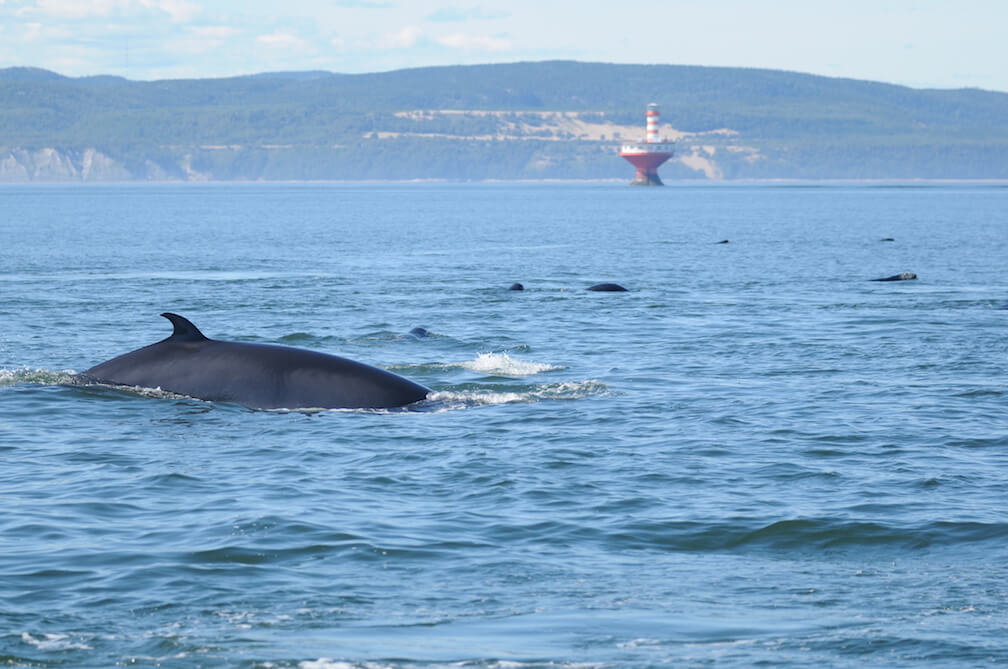 The answer lies…in a crystal ball! Marine mammal observations vary from year to year, from day to day, even hour to hour! Generally, migratory whales can be found in our waters from May to October. Occasionally, they are even spotted here in the winter. St. Lawrence consists of multiple feedings grounds and the exact times the whales arrive and leave these nutrient-rich areas varies. Ultimately, it is impossible to predict when and where they appear. The best way to see whales is to look out to sea and be patient!Here are a few tools to learn about the times when the probability of finding whales is the highest:

What factors influence the presence of whales and our observations?

Temperature, wind and sun have little influence on the presence and behaviour of whales. No matter the conditions, all marine mammals have to come up to the surface to breathe. However, all these factors can influence our ability to spot them. An ideal day for spotting whales would be a calm day with no wind and no fog. But ideal days hardly exist when you are on the water. One just has to adapt to the ever-changing conditions on the water; it is part of the fun. You can even spot whales in thick fog. How might you ask? You can listen to whale blows to get an idea of where they are. There is just something magical about listening to the ocean giants breathe. What about rain? It certainly does not affect the presence of marine mammals given they are always wet anyway.

Capelin is a favourite prey of several species of whales, such as minke whales, fin whales and the belugas. If you hear people say, “the capelin are rolling”, it means that thousands of them are starting to swim onto the beaches to spawn. This ecologically important phenomenon attracts an abundance of predators, including whales. This time of the year is therefore a prime time to observe whales feeding rather close to the shores.

Tides are the driving force of the ecosystems around here. The area around Tadoussac has semidiurnal tides, meaning the tides change roughly every six hours. With the tides changing at least four times in a day, the whole system becomes highly dynamic causing localized upwelling currents. These currents also cause the prey of whales to concentrate in various areas and because many species of whales are migratory species that are here to feed, the chances of finding them become the highest in areas with the highest concentrations of prey. Additionally, whales often use underwater currents to travel and such currents are also influenced by the tides. For example: the movement of belugas around the mouth of the Saguenay is often correlated to the movement of the tide.

Majority of species found in the St. Lawrence are migratory and leave for their breeding grounds each fall. So, the best time to take advantage of the highest abundance of whales here is roughly from May to November. However, that is not to say there aren’t opportunities to observe other marine mammals.

Belugas reside in the St. Lawrence all year long. Moreover, some larger whales, such as blue whales, frequent our waters in the wintertime. Apart from cetaceans, you can also find harp seals (December through May) as well as harbour seals here.