Despite its round and robust silhouette, this rorqual breaches and swims with grace. It raises its tail out of the water with each dive. The easily identifiable humpback is the most well known cetacean to researchers, notably for its migration habits. With its rich vocal repertoire essentially linked to its varied social activities, this species remains a fascinating subject of study which has yet to reveal all of its secrets.

In summer, humpback whales frequent the coastal waters of the Gulf and the Estuary. In the course of a given season they can prove to be highly mobile, with sightings in multiple regions of the Gulf: the Mingan Archipelago, Anticosti Island, the Gaspé Peninsula and the St. Lawrence Estuary. According to MICS, an increased presence of humpback whales has been observed in the St. Lawrence since the late 1990s. Since 1999, humpbacks have shown a tendency to frequent the Estuary more often and for longer periods. These observations are probably attributable to a recovery of the species: as the size of the population increases, the range may expand, which explains the exploration of new feeding grounds.

Every spring, over 7,500 humpback whales leave their winter reproduction site in the Caribbean and travel some 5,500 km to their feeding grounds in the North Atlantic and the St. Lawrence. In the fall, they take this route again when they head south. They spend the winter in large groups practically without feeding, living off their fat reserves.

The humpback whales that frequent the St. Lawrence belong to the North Atlantic population, which, according to the latest studies, is believed to use six summer feeding grounds (Gulf of Maine, Newfoundland/Labrador, Gulf of St. Lawrence, West Greenland, South Iceland and Barents Sea). This population is thought to number between 11,800 and 14,300 individuals. This species is present in all the world’s oceans and seems to be recovering. The population of the western North Atlantic, first designated “Threatened” in 1982, then “Special Concern” in 1985 by the Committee on the Status of Endangered Wildlife in Canada (COSEWIC), has been designated “Not at Risk” since 2003.

The humpback whale population of the Northwest Atlantic was designated “threatened” in 1982 by the Committee on the Status of Endangered Wildlife in Canada (COSEWIC), and “special concern” in 1985. Its status was reviewed again in 2003 and the population is now classified as “not at risk”. COSEWIC argues that fewer humpback whales are getting themselves entangled in fishing nets and that rescue teams have become more efficient in freeing caught animals. The International Union for Conservation of Nature (IUCN) has listed the species as “least concern”. In the United States, the humpback whale is considered “endangered” under the American Endangered Species Act. Lastly, this species does not appear in the List of threatened or vulnerable species in Quebec under the Act Respecting Threatened or Vulnerable Species.

The humpback whale is a gulper, feeding on planktonic crustaceans (krill) and small schooling fish (herring, capelin, sand lance). It feeds alone or cooperates with other individuals to hunt its prey. By breathing air through their blowholes, a group of whales can create a net or cloud of bubbles to cause panic amongst and trap their prey. Such bubbling techniques are not used everywhere and vary from one ocean to another. These feeding strategies are believed to be transmitted from mother to calf. Feeding techniques can also be passed between adults within a population. The humpback whale sometimes feeds at the surface, readily displaying its gaping mouth, its baleen as well as its gigantic throat expanded using ventral grooves.

The humpback is a rather slow moving animal. Its long pectoral fins, serrated and covered in tubers, improve its manoeuvrability and are used for steering and balance. These fins are unique in the animal kingdom and might even inspire engineers for applications for aircraft wings or wind turbine blades! Its aerial behaviour repertoire includes breaching and landing noisily on its back, belly or side (up to 30 times consecutively); slapping the water with its pectoral or caudal fins; and spyhopping with its head held vertical to the surface. Occasionally, some individuals can be very curious toward watercraft. When they dive, humpbacks arch their back and their caudal fin slowly rises vertically into the air. Thus, the underside of the tail is clearly visible and each individual can be easily identified thanks to its pigmentation pattern (predominantly black or white, marks, scars) as well as the shape of the two serrated flukes.

Although mostly solitary, humpbacks are observed in pairs or small rather unstable groups. Of all the rorqual species, humpbacks are the most socially active. In summer, the formation of small groups is believed to be linked to sectors where food is abundant. In the fall, groups are observed during migration. In winter months, more compact groups and even larger gatherings take shape for the reproductive season. In the summer of 2006, 2 second-year juveniles, Pi-rat and Gaspar, spent 6 weeks in the Estuary, often together. Their pairing was more unstable when they returned in 2007, with Pi-rat spending about 10 weeks in the sector compared to 8 weeks for Gaspar.

During the breeding season, males perform long, melodious and complex songs to attract females and certainly to establish dominance amongst competing males who themselves are also exhibiting aggressive behaviours. These highly varied songs are specific to each population. Recent discovery: in the Pacific, when a new song emerges in a group of males, it is imitated from pod to pod. This mode of horizontal cultural transfer takes place from east to west, from one year to the next and within the same generation. Moreover, the results of telemetric monitoring studies conducted in 2007 on humpback whales in the Northwest Atlantic reveal that these individuals emit sound pulse sequences in a wide frequency band in association with nocturnal feeding behaviours. Even if humpback whales vocalize mainly to communicate, they might also use sounds to “read” their environment, get their bearings and identify large targets. These powerful, low-frequency sounds can travel long distances.

Sexual maturity is reached at 5 years. Gestation lasts between 11 and 12 months. Calves are born between January and March. Nursing lasts 5 to 10 months. The young stays with its mother 1 or sometimes 2 years, which corresponds to the longest mother-calf bond of any Mysticeti whale. Since 2004, MICS has observed an increase in mother/calf pairs (14 pair for 2007, 14 in 2019).

The humpback whale was the first to be studied in its natural environment and knowledge of this species has progressed rapidly in recent years. Today it is the best known of all the large cetaceans. Given that individuals are easily recognizable, a broad-scale photo-ID project was carried out. The spectacular behaviours of the humpback have drawn the attention of numerous scientists as well as whale enthusiasts. In the St. Lawrence, the majority of research projects other than photo-ID initiatives focus on species of more precarious status. For the St. Lawrence, MICS manages a catalogue comprising over 700 individuals. 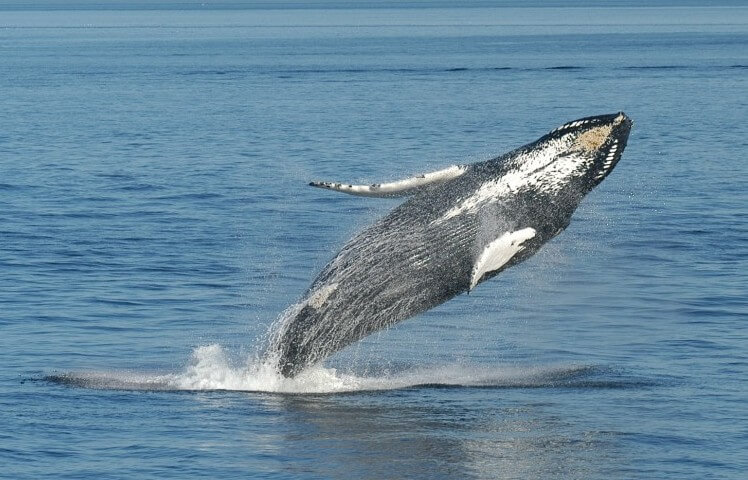