The northern bottlenose whale, rare visitor to the St. Lawrence, possesses remarkable diving abilities, both in terms of time and depth. This allows it to benefit from living food resources over 1,000 m deep, such as in the Sable Gully off the coast of Nova Scotia, where a small distinct population (also known as the Scotian Shelf population) lives year round.

Observations of the northern bottlenose whale are extremely rare in the Gulf and the Estuary. Since 1994, less than 10 individuals have been found stranded on the shores of the St. Lawrence.

The northern bottlenose whale does not seem to have a seasonal north-south migration pattern, even if occasionally complex movements are observed in this species, which stays near the edge of the ice cover. The Scotian Shelf population is a year-round resident, with a high population density in the Sable Gully.

The northern bottlenose whale is found in cold, deep waters of the North Atlantic (between the 40th and 80th parallels). In the Northwest Atlantic, populations reside off the coasts of Cape Cod, Nova Scotia, and Newfoundland as well as in the Arctic. A small population of northern bottlenose whales, genetically distinct and estimated at some 160 individuals, frequents a zone 200 km off the Nova Scotian coast in the Sable Gully sector, an underwater canyon harbouring a rich diversity of marine species. One third of them live there year round.

The northern bottlenose whale population of the Scotian Shelf was designated “not at risk” by the Committee on the Status of Endangered Wildlife in Canada (COSEWIC) in 1993. The Scotian Shelf population was listed as “special concern” in 1996 and “endangered” in 2002 and 2011. This population is threatened by bycatch in fishing gear, oil and gas exploration, and development projects in and around its primary habitat near Sable Island. Northern bottlenose whales have perished in other regions due to intense underwater noises associated with sub-marine exploration and military exercises.

The northern bottlenose whale is designated “data deficient” by the International Union for Conservation of Nature (IUCN).

Even if squid are its favourite prey, the northern bottlenose whale has a varied diet that it pursues in deep waters and on the seabed: herring and other groundfish, shrimp as well as sea cucumbers and starfish.

This species can stay at the surface for about 10 minutes, with breathing sequences of 30 to 40 seconds. It alternates rest periods and rapid swimming sequences, changing direction frequently. Occasionally curious with boats, it may approach or even circle them if they are stationary. It rarely lifts its tail when diving.

The northern bottlenose whale dives to extreme depths: recordings made in the Sable Gully reveal that it regularly dives to the bottom of the canyon, i.e. 1400 to 1500 m. These dives generally last between 3 and 70 minutes, with a known record of 2 hours.

This is a gregarious species, forming pairs and pods of 3 to a dozen or so individuals. Individuals of the same sex seem to form long relationships. Pod members don’t abandon one of their own kind when an individual is injured.

The northern bottlenose whale emits whistles, chirps, modulated sounds and clicks. Ultrasound is used for echolocation to navigate and to find prey, while other vocalizations are used for communication.

Sexual maturity is reached between 7 and 10 years. Calving takes place from April to June, and as late as August for the whales of the Gully. Gestation and lactation each last 12 months.

Since 1988, the small fragile population of the Gully has been the subject of a long-term monitoring study conducted by the team of Professor Hal Whitehead of Dalhousie University (Halifax, Nova Scotia). Projects carried out in this region include acoustic monitoring, telemetric follow-up and photo-ID which, based on marks present on the animals’ dorsal fins, has been used to compile a catalogue of approximately 160 individuals. In addition to chemical pollution and bycatch in fishing gear, noise pollution generated by gas and oil exploration in this region represents a serious threat to these whales. 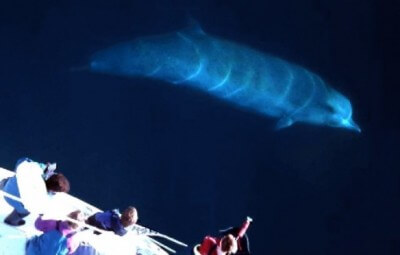