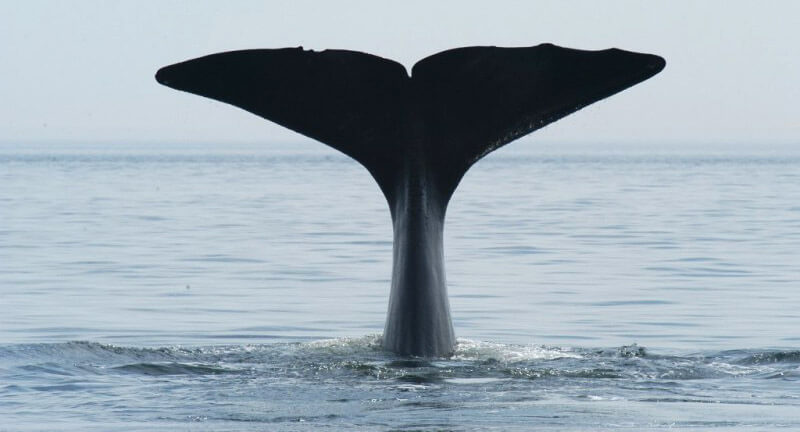 Whales can remain under water for a long time. How long? Humans can hold their breath for one and a half to two minutes on average; the world record is over seven minutes. In whales, the record belongs to beaked whales and male sperm whales, which can dive for over 120 minutes. How do they do it?

One might think that it’s because they have enormous lungs. But, proportionally speaking, a human’s lungs are bigger! A pair of human lungs represents approximately 1.75% of the person’s total weight, while in blue whales, this proportion is only 0.73%. Curiously, it seems that having small lungs is an adaptation for diving. Indeed, water pressure, which increases with depth, compresses the air-filled lungs, which causes tension on the lung tissue and thoracic cage. A marine mammal that minimizes the volume of air minimizes this tension. Some marine mammals even exhale the air in their lungs before diving.

Whales thus hide their oxygen reserves in places other than their lungs such as in their blood and muscles. Just like for humans, breathing allows the blood to fuel up on oxygen. With each breath, whales exchange 85-90% of the air held in their lungs, as opposed to land mammals which renew only about 15% of the air volume in their lungs. Whale blood thus oxygenates very efficiently, especially as it is very rich in oxygen-transporting red blood cells. Whales also accumulate oxygen in their muscles: an oxygen-binding molecule, similar to that found in red blood cells, is present in high quantities in their muscles, which explains why their flesh is so dark, almost black in the case of the sperm whale.

Having good oxygen reserves when diving is good, but economizing them is even better! For this, whales have a number of tactics. When diving, their heart rate slows, with their blood then delivering oxygen only to the brain and vital organs. Additionally, they can alter their behaviour and lower their body temperature to save energy, and thus oxygen. They can also use energy mechanisms that do not require oxygen. These are called anaerobic mechanisms, the same as those used by our fatigued muscles when our lungs and heart can no longer keep up.

Whales have developed a number of anatomical, physiological and behavioural adaptations to reach water depths characterized by extremely high pressure. Nevertheless, whales, like divers or astronauts, can suffer from what is known as decompression or caisson sickness.

What is decompression sickness?

Pressure varies with water depth. The deeper one dives, the higher the pressure.

The weight and pressure of the water exerts a compressive force on whales. If they rise to the surface too quickly, they may suffer the consequences of decompression sickness.

In humans, decompression sickness is well known. Nitrogen, one of the gases present in the air inhaled by divers, dissolves in the blood and tissues in the form of microbubbles. If a diver ascends too quickly, the bubbles grow larger and the gas cannot be exhaled by the lungs. Variably serious and even fatal lesions can appear, as well as joint pain and paralysis. Like whales, freedivers do not continually inhale nitrogen the way conventional divers do. These accidents can therefore occur in freedivers during repeated dives or dives to extreme depths, but also in whales.

How do whales tolerate decompression?

Whales’ evolutionary adaptations allow them to better withstand the pressure exerted by water. Unlike humans, they lack facial sinuses; instead, their middle ear is adapted to changes in pressure and their lungs are smaller, which helps avoid excessive compression. Their oxygen is not only in their lungs, but also in their blood and muscles. With these adaptations, whales generally do not suffer from decompression sickness, except in certain situations.

What creates these conditions in whales?

For a decompression accident to occur, one must rise to the surface too quickly for the nitrogen inhaled prior to the dive to have the time to adapt to the pressure change associated with the ascent. What might make a whale ascend too quickly, at the risk of jeopardizing its life?

Military exercices, for example. In 2002, a stranding incident of beaked whales coincided with a high-speed sonar test. These sonars generally emit medium-frequency (though sometimes low- or high-frequency) sounds, which can destabilize whales. When the animals find themselves in proximity to operating sonars, they may hastily swim away, without necessarily considering the sudden changes in pressure.

Seismic activities can also affect whales. The shorter the distance, the higher in frequency the sounds triggered by the tremours. The farther one moves away, the lower the frequency. With all these noises, cetaceans struggle to communicate, locate prey and orient themselves.

All these noises might therefore have a direct impact on whales: nitrogen bubbles form with the stress associated with intense sound, potentially oversaturating tissues and blocking the passage of oxygen.

Whales’ foraging behaviour can also cause them to ascend too quickly, as in the case of Risso’s dolphins. When these dolphins hunt their favourite squid in deep waters, they occasionally ascend too quickly and repeatedly, resulting in decompression sickness. A study published in the journal Nature explains this phenomenon by stating that “the dolphins would enter in a situation characterized by severe stress, abnormal dive behaviour, vigorously swimming, rapid ascending, and struggling at depth and surface.” 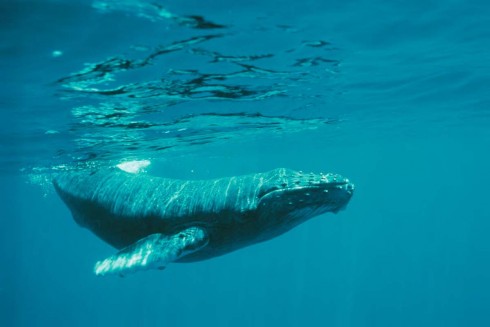