Fascination for a monumental and mythical cetacean

The sperm whale is the largest of all toothed cetaceans, figures among those that dive the deepest and the longest, and possesses the largest brain in the animal kingdom. Even if it was a choice target of commercial whaling in the past, this species is one of the most plentiful in the world. This gregarious whale has a complex and surprising social organization. With its massive body, prominent melon, and peculiar behaviours, it inspires the imagination. In the Herman Melville novel, inspired by hunting tales of the early 20th century, the albino sperm whale Moby Dick is pursued across the oceans by Captain Achab. But scientific study provides us with knowledge of this species that is every bit as fascinating as the myth.

The presence of sperm whales is occasional in the Gulf of St. Lawrence and St. Lawrence Estuary. The first photo-documented record was made in 1991 by the GREMM. The oceanographic conditions of the St. Lawrence (cold, shallow water) suggest that these records are likely young bulls that separate from their pods as they approach sexual maturity. They are thought to be seeking new feeding grounds, i.e. large areas rich in food resources, while at the same time avoiding competition with older males. Between 1991 and 2009, sperm whales were spotted between May and October in the Estuary, generally in groups of 1 to 4; a group of 15 individuals was observed in 1997. The most faithful one, Tryphon, died in an incidental catch in fishing gear near Sept-Îles in 2009.

Differences in migratory patterns are observed between males and females. Only adult males migrate to higher latitudes to feed, dispersing more than females and over larger tracts of territory. They can travel from one end of the ocean to the other. When they reach the age of 25, they seem to migrate in winter to lower latitudes (tropics), where their reproduction grounds lie. But little is understood with regard to the timing, duration, and frequency of their visits to these sites. The pods consisting of females and juveniles generally remain for about 10 years within a zone near the Equator spanning some 1000 km in longitude. Females can sometimes travel several thousand kilometres across the ocean.

The sperm whales that frequent the St. Lawrence belong to the North Atlantic population. In 1995, the population of the Northwest Atlantic was estimated at 2698 individuals (this census was conducted by boat and plane and did not account for animals below the surface). Practised for nearly three centuries, commercial whaling seems to have considerably reduced the Atlantic population, with males having been more affected than females. The sperm whale is found in deep, ice-free waters of all the planet’s oceans and seas, including the Mediterranean. It exhibits a high degree of genetic uniformity across the world.

Widespread throughout the world’s oceans, global sperm whale populations are deemed to be sufficient, despite having incurred considerable declines due to commercial whaling, which Canada suspended in 1972. In 1996, the North Atlantic population of sperm whales was assessed and deemed “not at risk” by the Committee on the Status of Endangered Wildlife in Canada (COSEWIC). The International Union for Conservation of Nature (IUCN) has listed the species as “vulnerable”. The sperm whale is considered “endangered” under the American Endangered Species Act. This species does not appear in the List of threatened or vulnerable species in Quebec under the Act Respecting Threatened or Vulnerable Species.

The sperm whale spends the better part of its time searching for food in deep waters. Its general feeding pattern consists of dives to depths of 300 to 800 m for a duration of 40 minutes, alternating with 8-minute breathing periods at the surface. It travels hundreds of kilometres depending on the abundance of food, plying back and forth according to what it finds. Even if its main prey consists of squid weighing 1 kg, the sperm whale has a varied diet including squid whose tentacles measure from a few centimetres to 10 m, pelagic fish, bottom-dwelling fish and crustaceans.

The sperm whale exhibits long breathing sequences which include up to thirty blows. Although a slow swimmer on average, it is capable of strong bursts of speed when hunted or chased. It can also remain in a stationary position. Before diving, the crown of its head emerges in a sort of lunging movement, with its tail then slowly rising high in the air.

Diving and surfacing are vertical. Sperm whales often surface at about the same spot. Under water, their massive body moves gracefully. On average, its dives last about 1 hour, but can reach 90 minutes or even 2 hours, and attain depths of 1000 to 2000 m. Sperm whales also move horizontally in shallower waters between 50 and 300 m. According to one old hypothesis, the spermaceti, a waxy organ present in the head’s enormous melon, was used to control the density of the oil contained in this organ in order to facilitate descents and ascents during dives. Today, researchers credit this organ with the role of producing sonar clicks.

Depending on their age and sex, sperm whales live alone, in pairs or in groups. Their social life is complex and is organized into family units. When they leave their family units around the age of 6, similarly-sized males gather into more closely-knit groups. As they grow and age, they move to higher latitudes. Over the years, however, pod cohesion diminishes. During reproduction, bulls avoid one another and are essentially solitary. They are equally unsociable toward the ends of their lives. Occasionally, large bulls will engage in short-lasting spars that can leave scars to their heads and bodies. Within these family units, stable bonds exist between females, whose knowledge is transferred to their calves. Cows work together to keep watch over their young, search for food and defend against predators. During predator attacks, sperm whale pods place themselves in a defencive formation (a position known as “marguerite”): heads facing the centre, and bodies deployed like the spokes of a wheel.

Sperm whales emit a wide array of sounds (clicks, pulsing sounds, squeals) in deep water and at the surface. These sounds organized in varied patterns can be specific to an individual and repetitions may be spaced out or in rapid succession. They are used for communication as well as echolocation to detect prey and elements of the environment. Each pod is thought to have its own characteristic dialect.

Females reach sexual maturity between the ages of 7 and 13; males gradually between 10 and 20. After their late 20s, males play an active role in the reproduction grounds. They can continue growing until the age of 40. Although reproduction may sometimes occur at other times of the year, spring is the most conducive season. Gestation lasts between 14 and 16 months. The average age of weaning is 2 years, but calves begin to eat solid foods even before they are 1 year old. They may continue suckling their mother – or even another lactating female – until the age of 5 or even up to 13.

The relative abundance of the global population should not overshadow the modest renewal rate of this species, with hunting in particular having reduced the number of males. Boat collisions, noise and chemical pollution, bycatch in fishing gear and climate change are all threats to this species. Research projects are conducted by means of carcass examinations, acoustic studies, telemetric monitoring and biopsies with genetic analysis. Using photo-identification based on shape, colour pattern, and tail marks and scars, researchers carry out long-term monitoring of individuals. In the St. Lawrence, the GREMM maintains a catalogue comprising some thirty individuals. 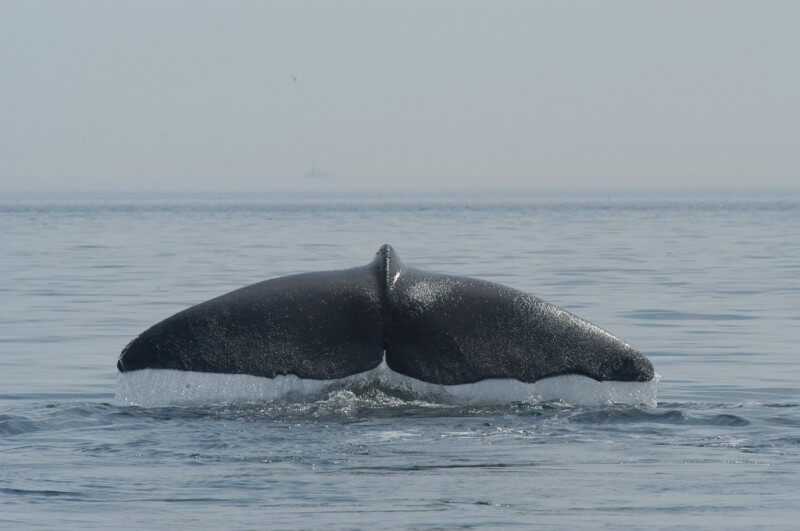 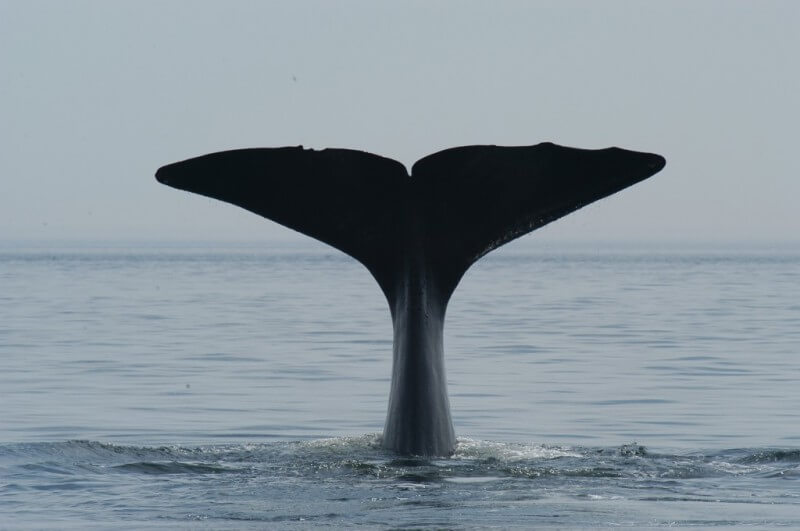 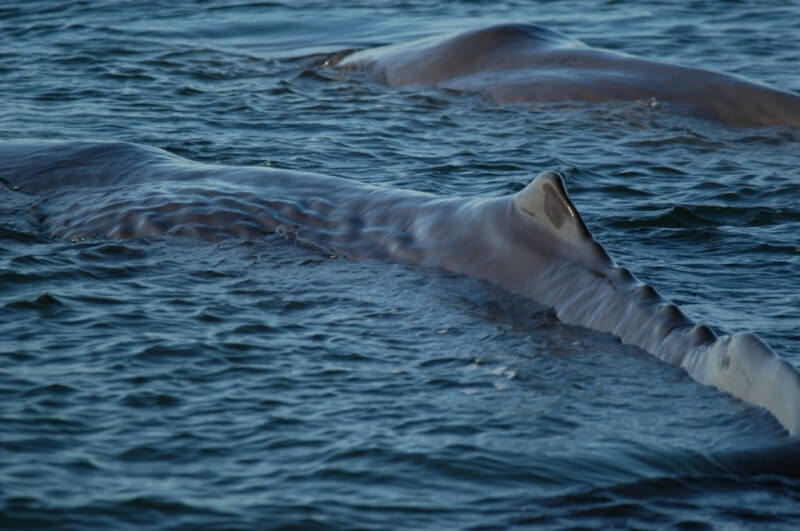 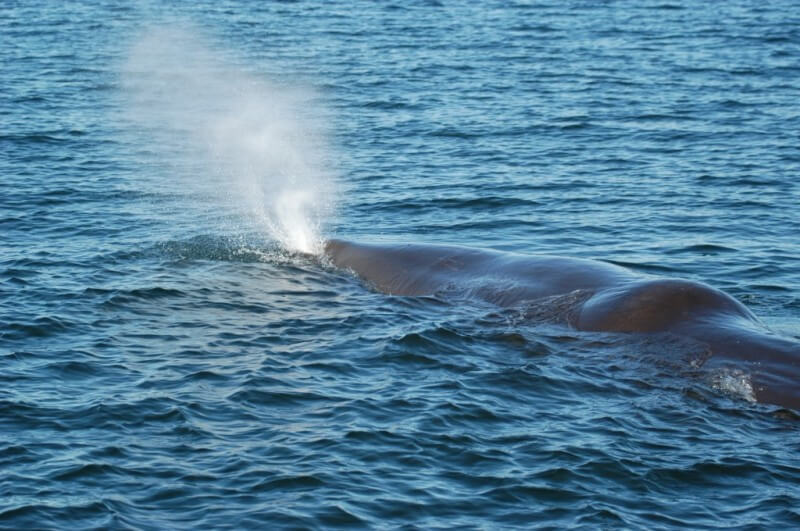