The Origin of Whales or the Evolution

The first whales appeared 50 million years ago, well after the extinction of the dinosaurs, but well before the appearance of the first humans. Their ancestor is most likely an ancient artiodactyl, i.e. a four-legged, even-toed hoofed (ungulate) land mammal, adapted for running. Cetaceans thus have a common ancestor with modern-day artiodactyls such as the cow, the pig, the camel, the giraffe and the hippopotamus.

The whales that we know today are extraordinarily well adapted to life in the water. Millions of years in the sea have favoured transformations to facilitate life in this new environment. Nostrils have evolved into blowholes and are now located at the top of the head. Hind limbs have disappeared and front limbs have transformed into fins. The body has lost its fur and nearly all of its hair. It is streamlined. A horizontal, powerful propeller of a tail has attached itself to the vertebral column. These adaptations blur the relationship that exists between whales and their closest living relatives.

However, whales, like humans, are mammals. They have lungs and breath air. They are warm-blooded, meaning they maintain a constant body temperature (37°C). Their offspring develop in the mother’s womb, are nourished by the placenta during pregnancy and are nursed after birth.

The study of the origin of species and their evolution is largely based on the discovery of fossils. These records also help to better understand how animals have moved over time. Historically, scientists used morphological criteria exclusively to establish relationships between species. Advances in molecular biology now make it possible to study lineage by comparing the DNA of different species.

For natural selection to do its job, a trait must be present in only some individuals, it must be inheritable – meaning it must be written in the DNA and transmitted to the offspring – and lastly, it must offer a survival or reproduction advantage to the individuals that have this trait.

The effects of natural selection are particularly visible in times of environmental change: species are no longer adapted to their environment and their survival decreases, with the exception of those individuals that happen to possess an advantageous trait under the new conditions. The latter survive and reproduce, which makes the species evolve.

It has taken millions of years for the first whales to evolve and develop the numerous physiological adaptations of modern-day whales.

The ancestor of today’s whales, the first cetacean, is believed to be Pakicetus, a quadruped measuring 1 to 2 metres long. Skeletons discovered in Pakistan indicate that the animal had typical artiodactyl ankles and a typical cetacean skull. Unlike today’s whales, this species was not aquatic and its ankles are testimony to its running ability. It is still considered a cetacean, especially on account of the morphology of its inner ear. The shape of its teeth suggests that Pakicetus was carnivorous, like modern-day whales.

47 million years ago: back to the water

Are you familiar with the water chevrotain? Measuring approximately 80 cm in length, this herbivore is native to Africa. It is unique in that it takes refuge in the water to escape its predators and can remain there for 4 or 5 minutes! The water chevrotain is the closest living animal to Indohyus, a distant ancestor of whales.

It is believed that the descendants of the first land-roaming cetaceans increasingly gravitated to an aquatic environment, in some cases to seek refuge from danger – just like today’s water chevrotain – or to feed. As today’s artiodactyls are all herbivores, biologists believe that cetaceans evolved because some of the herbivores in this group appear to have changed their diets to become carnivores. However, this thesis is not unanimously accepted, as some scientists contend that the ancestor was omnivorous.

Ambulocetus, a four-legged whale whose legs were probably webbed, was likely able to both walk and swim, while bone analysis has revealed that it could live in fresh and salt water alike. Its inner ear was adapted to life in an aquatic environment.

42 million years ago: journey to the Americas

From the region around India and Pakistan, the ancestors of modern whales then migrated to ultimately reach the ranges of today’s cetaceans. What path did they take and when? The fossil record can answer this question, but it is currently too fragmented to get a clear picture.

The discovery of a four-legged whale fossil in Peru in 2011 shed some light on the cetaceans’ journey. This ancestral whale supports the hypothesis of a westward migration predating a northward migration, less than 10 million years after the appearance of the first whales in the region around India and Pakistan.

Based on the skeleton found in Peru, researchers were able to achieve this artistic reconstruction of the four-legged whale. It could live on land and in water and probably fed on large fish. © Alberto Gennari

Today’s whales are divided into two major groups: odontocetes, or toothed whales, and mysticetes, or baleen whales. Their common ancestor, which lived about 34 million years ago, probably lacked baleen and could not use echolocation. In just 5 million years, whale species have diversified, probably due to rapid ecological changes in the oceans.

Fifteen million years ago, another rapid diversification of cetacean species occurred, as ocean cooling changed the currents. At the same time, the number of mollusk and crustacean species consumed by some whales also increased.

The first mysticetes measured 5 to 9 metres in length (approximately the size of today’s minke whale). Whales are believed to have reached the size we know today only about 4.5 million years ago. The sudden growth of mysticetes coincides with the cooling of the climate and the formation of large ice caps in the northern hemisphere. In spring and summer, ice-trapped nutrients are released into open water and accumulate near the coasts. Driven by currents, plankton accumulate in these areas and grow substantially when they come into contact with nutrient-rich waters. Plankton – until then widely dispersed in the ocean – begin to form seasonal concentrations, sometimes separated by thousands of kilometres. 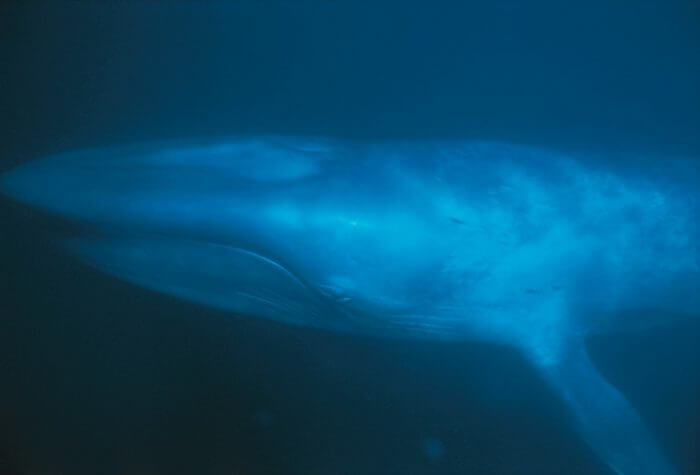 In this new reality, size becomes a characteristic subject to a strong selection pressure. Thus, the most corpulent individuals, with their greater reserves, are able to travel longer distances and take advantage of these recently-formed feeding grounds. As for the smaller ones, they gradually disappear and give way to the era of the giants. Being bigger has many benefits. Giants are more likely to be at the top of the food chain and therefore considerably less susceptible to predation. On the other hand, they are much more at risk of extinction in times of environmental change or crisis.

Whales are still evolving nowadays. Ecosystems are regularly modified and interactions between species are dynamic. Hence, there is always a need to adapt to changing conditions. Modern-day whales are subject to several evolutionary pressures such as climate change, decline in prey abundance and ocean pollution. Their large size makes them particularly vulnerable to lack of food.

Whales have gained a lot by losing genes!

Bigger, heavier, better divers… Whales are often thought to be superior to humans in many respects, but sometimes it is the loss of genes that is at the root of their adaptations. Genes linked to feeding, including those responsible for saliva production or those that code for the reabsorption of sodium by the kidneys, have disappeared because they have become useless to whales which, with a few exceptions, live in saltwater environments. Their lives at sea make the lubrication of food unnecessary and sodium deficiency virtually impossible.

As for rest, this activity in whales is influenced by the loss of the gene responsible for the production of melatonin, a well-known hormone that regulates the sleep cycle. This adaptation is probably due to the fact that in cetaceans, breathing is a voluntary activity and falling into a deep slumber would likely increase the risk of drowning in these marine mammals.

Other genes that have disappeared in cetaceans are those that are useful to terrestrial animals but which cause problems during diving due to the extreme pressures their bodies are subject to. Researchers have notably observed the disappearance of genes that facilitate blood clotting and those associated with fibrosis and other lung issues in some humans. Another gene that indirectly increased the risk of DNA mutations in diving cetaceans has also vanished from their genetic makeup.