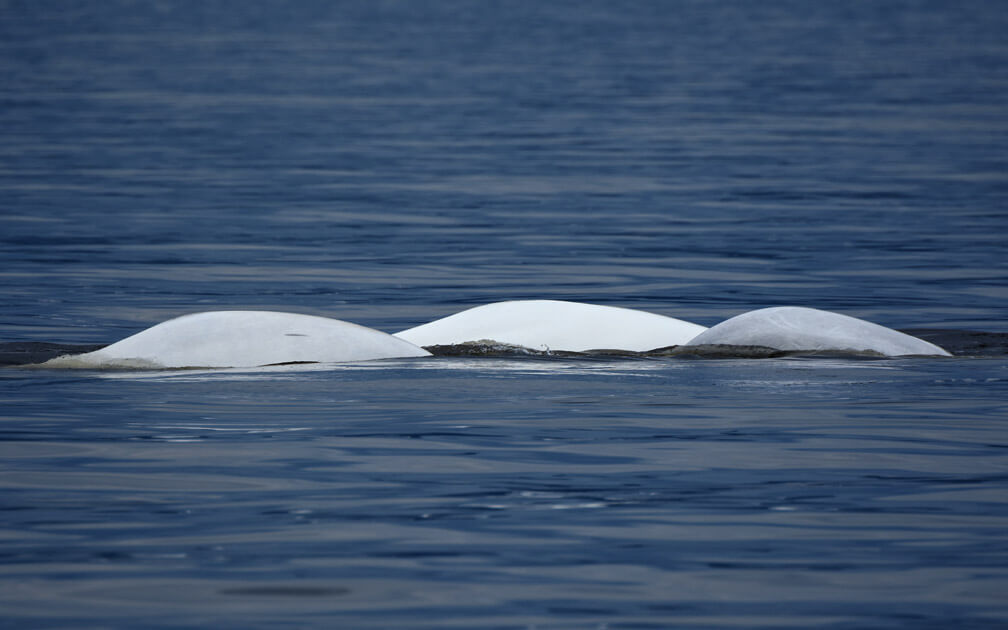 THE MYSTERY OF BAIE SAINTE-MARGUERITE

This week, we take a closer look at the intensive beluga biopsy program spearheaded by researcher Véronique Lesage of Fisheries and Oceans Canada, who will be accompanying us on the water over the next three weeks. We spent 26 hours with belugas and conducted six censuses. On September 11, strong winds from the northeast force us to head up the Saguenay Fjord to Baie Sainte-Marguerite, an enigmatic place where the belugas give us a run for our money.

The day started off well with two biopsies in a herd of about 60 animals in the Île Rouge sector, in the heart of the Estuary, but afterwards weather conditions quickly grew worse. Waves over three feet high make it impossible to work, and we are forced to terminate the contact.

Around 3 pm, after three unsuccessful contacts in which other belugas get away from us among the cresting waves, we end up finding a herd of fifteen animals in Baie Sainte-Marguerite. Here we are sheltered from the wind, but the belugas are the ones making things difficult for us. In this bay, beluga behaviour is often unpredictable, with animals constantly moving in and out of groups and changing direction; in short, they are driving us a bit crazy! This “carousel” is a classic behaviour of Baie Sainte-Marguerite, which is the point of arrival of beluga herds swimming up the Saguenay Fjord. But why do they stop at this spot? Even today, the role that this site plays, though presumably an important one in the lives of belugas, is poorly understood. Is the area a privileged place for feeding? For raising young? Or perhaps to strengthen the social bonds between individuals?

Click on the map to navigate with the Bleuvet and discover the highlights of the week! Although this map is only available in French, the image it illustrates goes beyond language.

IDENTIFICATION OF THE WEEK

The complete list of identified belugas requires meticulous efforts to match individuals, which will be undertaken after the field season.