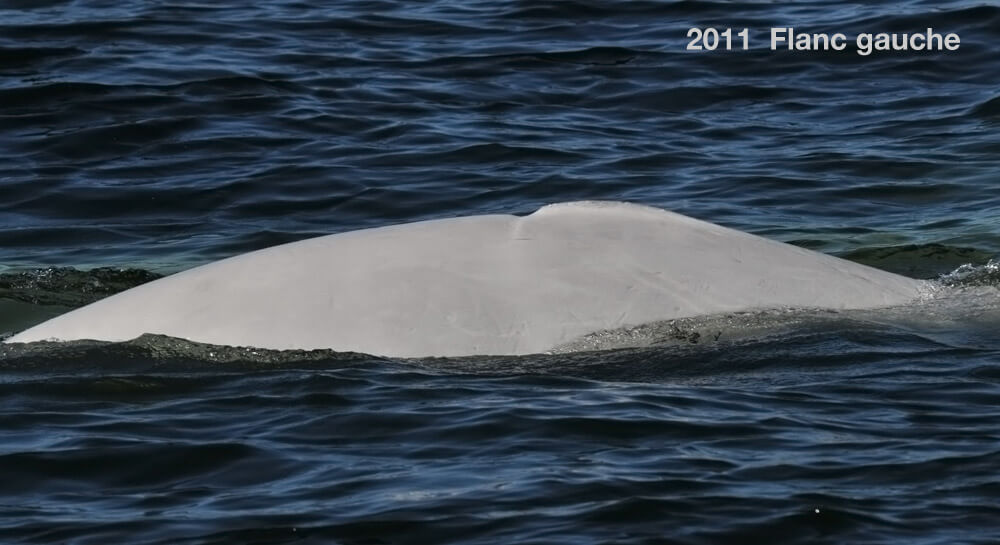 The deep scar in her dorsal crest, which appeared in the weeks following her birth, is Miss Frontenac’s signature. She also has other notches in her crest and some white lines on her flanks. 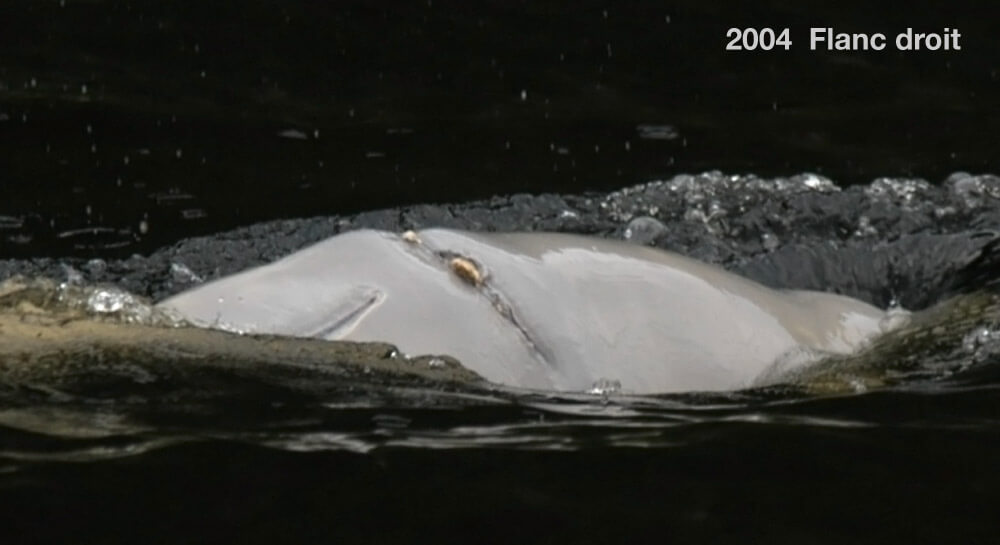 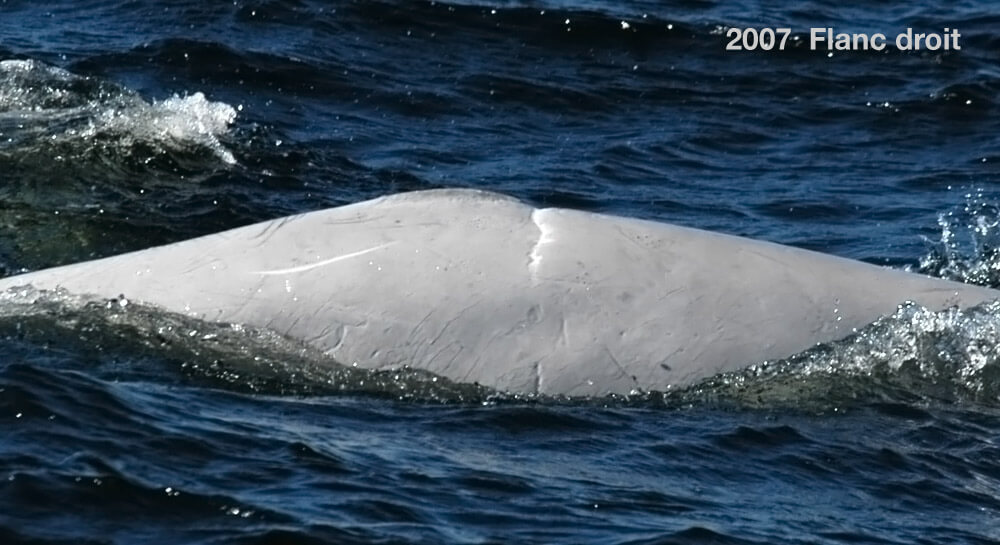 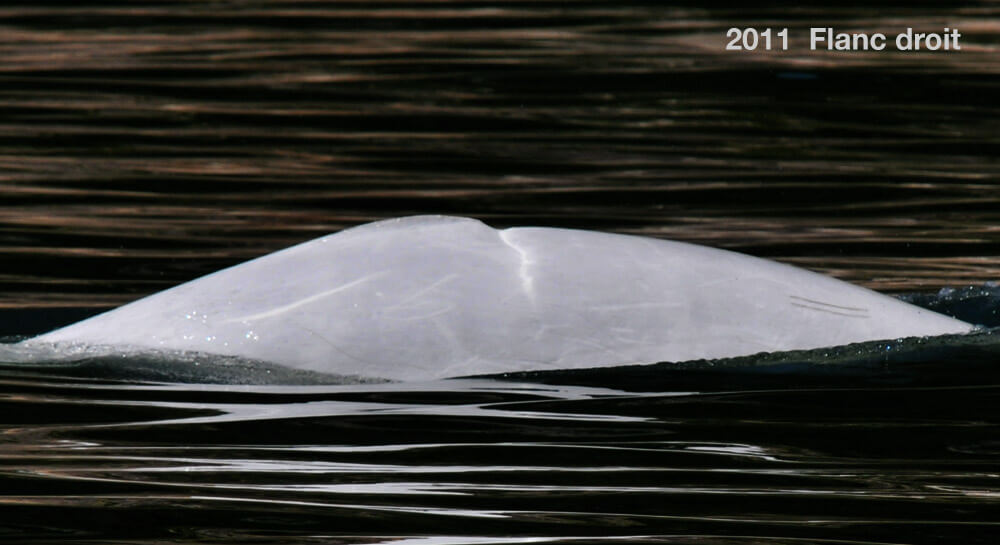 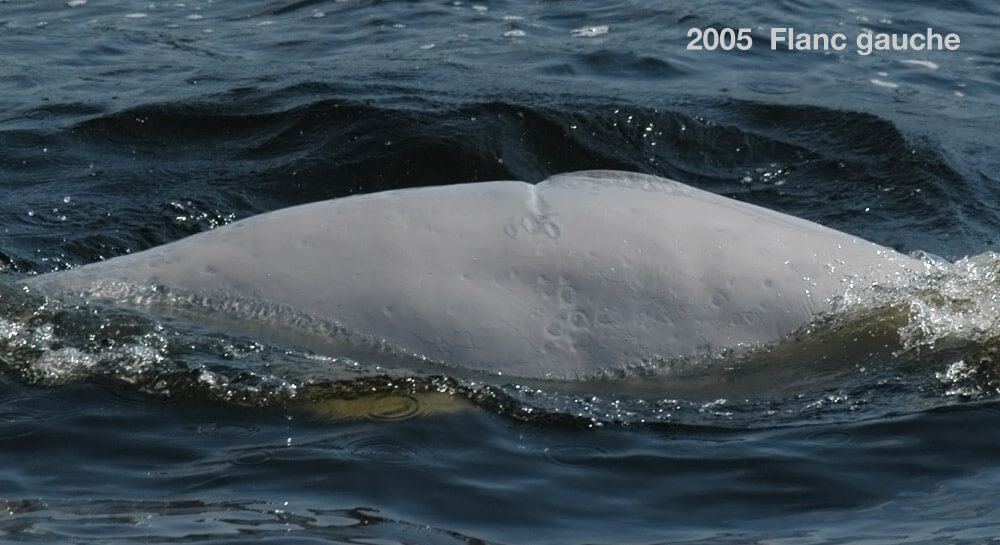 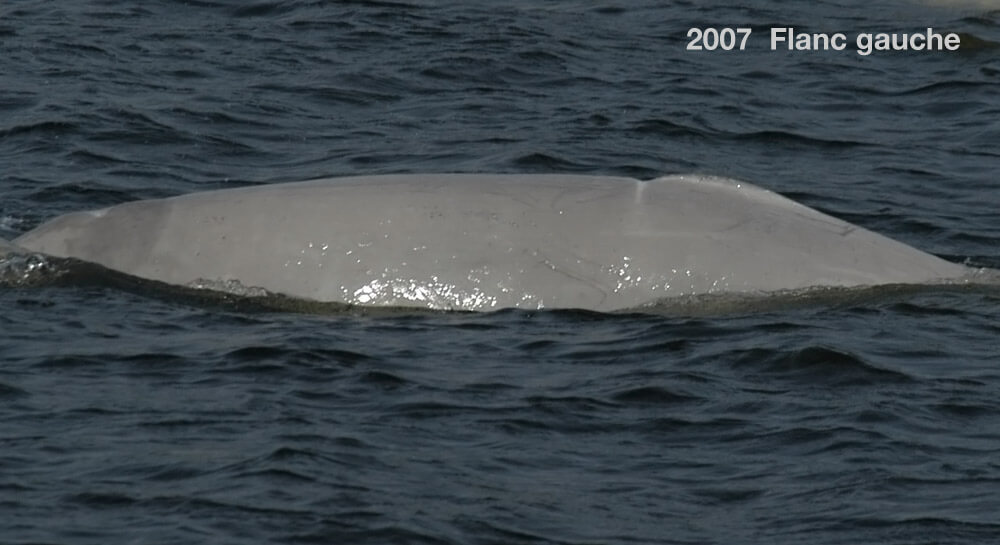 When we first met Miss Frontenac, she had just been born. We are therefore able to affirm that she was born in 2004.

In 2014, Miss Frontenac has been observed several times with a newborn baby. These multiple observations allow us to confirm with certainty that Miss Frontenac is a female and that she is fertile. She belongs to the Saguenay female community.

This is the first beluga whale in the history of the photo-identification program that we have been able to include in our repertoire since its first weeks of life. We first met her with her mother, Pacalou. And now it’s her turn to have a baby! She has also returned to the area she used to frequent with her mother: between the Saguenay Fjord, the Batture aux Alouettes, Île Rouge, and as far as Baie des Rochers and Cap de la Tête-au-Chien. She left this area when she was younger, to join the Teenagers’ Corner, located near Île Rouge and Rivière-du-Loup.

The first time the GREMM team met Miss Frontenac in 2004, she was just born and still has her characteristic café-au-lait color. She becomes the first beluga whale to enter the photo-identification repertoire at such a young age. The sudden appearance of a large scar on the dorsal crest of the young beluga whale in its first weeks of life – a reminder of a collision with a boat?- allowed us to quickly identify her and to follow its evolution every summer.
She was first seen with her mother Pacalou in the female community of the Saguenay, then, a little later, she joined the “teenage sector” near Île Rouge and Rivière-du-Loup. In 2014, when she reached sexual maturity, she gave birth to her first calf and then reintegrates the female sector, which extends between the Saguenay Fjord, the Batture aux Alouettes, Île Rouge and Cap de la Tête-au-Chien. Two more births followed, confirming that this is indeed a fertile (and productive!) female.
A symbol of hope for the fragile St. Lawrence beluga whale population, Miss Frontenac is honoured in the form of a sculpture at the entrance of the Marine Mammal Interpretation Centre in Tadoussac. As for her name, it was given to her at the age of 4 by her godfather, Fairmont Château Frontenac, as part of GREMM’s “Adopt a Beluga” program.

In the Saguenay, visibility is not very good. The fog lets the sun filter through, creating reflections on the surface. Nevertheless, we manage to spot a herd of twenty belugas, composed of adults and young. Belugas dive for a long time, which makes approaches difficult. Two animals spit water sprays in the air. They could be in the middle of hunting.

We can easily spot Miss Frontenac in the herd, because of her large gash on her back. Next to her is a young blueberry. This is an interesting observation, since last year, Miss Frontenac was observed with a newborn. It is therefore probable that this blueberry is her young. In the herd, we also observe Artsea and Athena. A new group from Sainte-Marguerite Bay is joining the herd. Just before leaving the herd, we notice some newborns.

That morning, Miss Frontenac, in company of about twenty individuals, is at the mouth of the Saguenay River, near the clay cliffs of Tadoussac. We see belugas of all colors: white, gray and brown. This herd is composed of adults, juveniles and five newborns. Miss Frontenac is accompanied by a newborn.

The animals go in all directions, it is not easy to follow them. We attempt a biopsy on one of the animals in the herd; successful! We hope to take more samples as we are in the last week of biopsy collection to determine the proportion of pregnant females.

We are near buoy k58, in the mouth of the Saguenay Fjord. Miss Frontenac is in a herd of eight individuals, including adults and young. The animals are on surface feeding: we see heads and tails, it’s very impressive! After about forty minutes of observation, about twenty animals were added to our eight individuals. However, the herd is very scattered, which makes it difficult to take notes.

The mouth of the Saguenay River is a meeting zone! The networks of male beluga whales cross the networks of females with the young. Large herds form there, in a ephemeral way, because of the abundance of food. It is also where the salt waters of the Lower Estuary meet the brackish waters of the Saguenay. The topography, currents, tides and characteristics of the water masses that meet create very particular oceanographic conditions that trap prey and attract marine mammals and birds.

This is a contact rich in newborns! We are at the mouth of the Saguenay River, a few meters from our home port of Tadoussac. Between Pointe Rouge and Pointe Noire, we observe five newborns, including those of Marguerite, Miss Frontenac and Blanche. Pure Laine swims beside them. For the moment, we have never been able to confirm that Pure Laine is fertile. Will we see her soon with a little one? We leave the belugas with newborns alone, we go to a group of adults to take two biopsies.