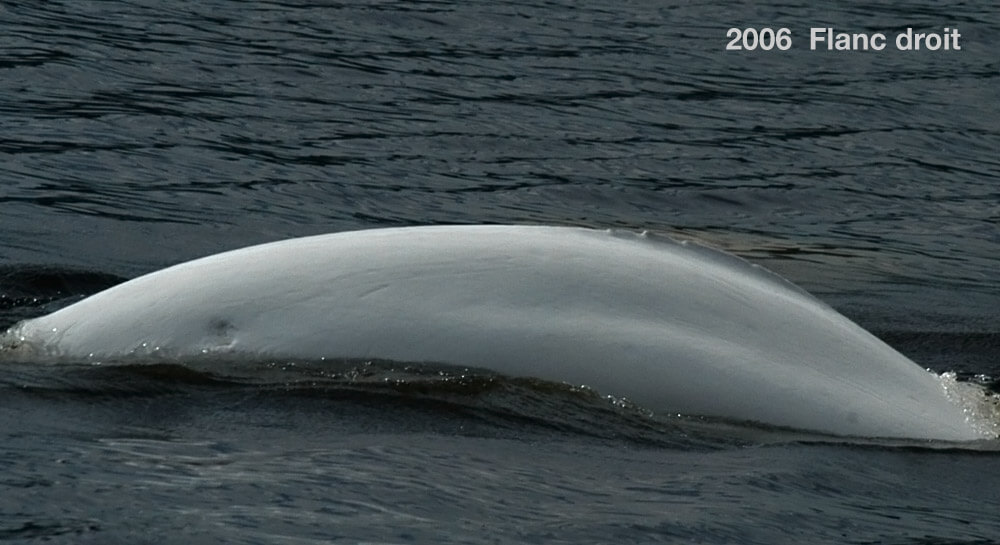 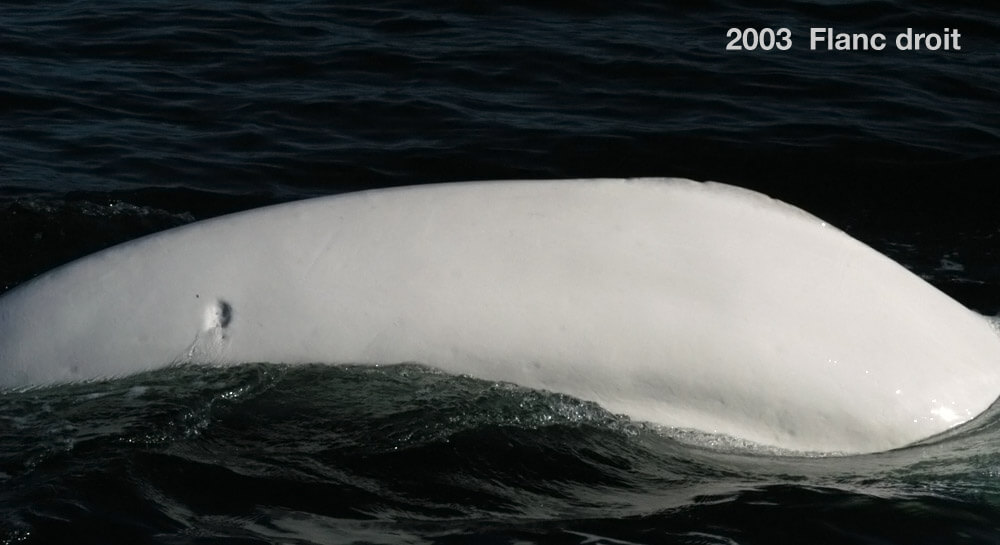 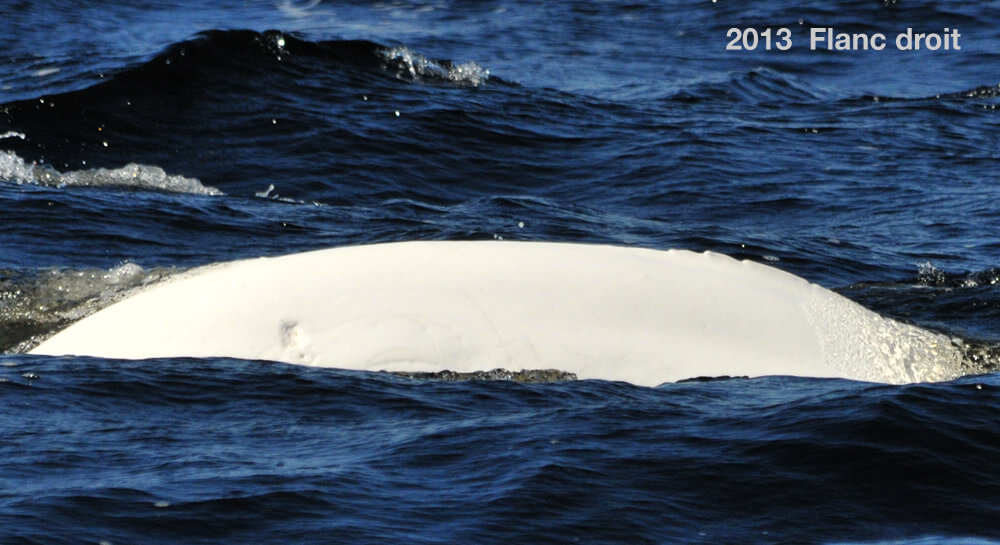 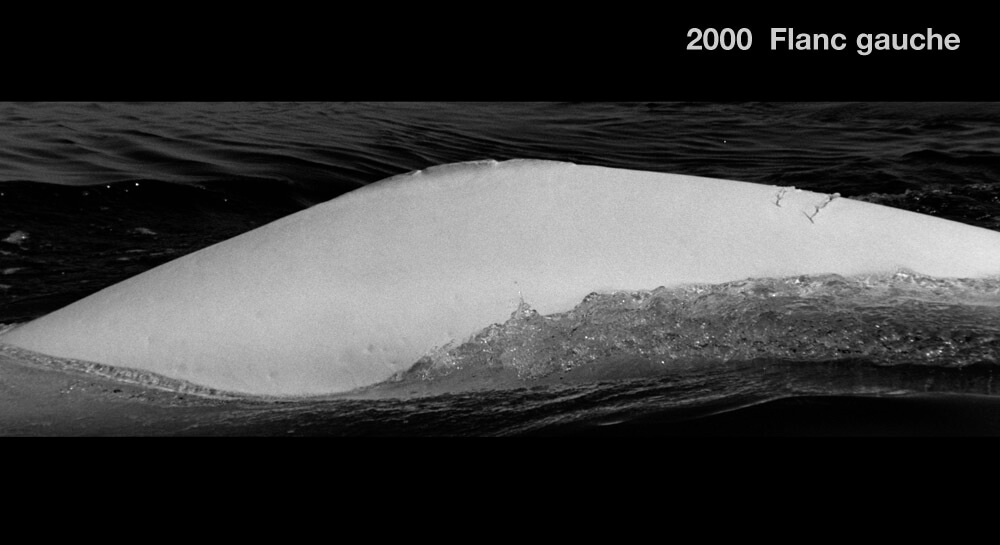 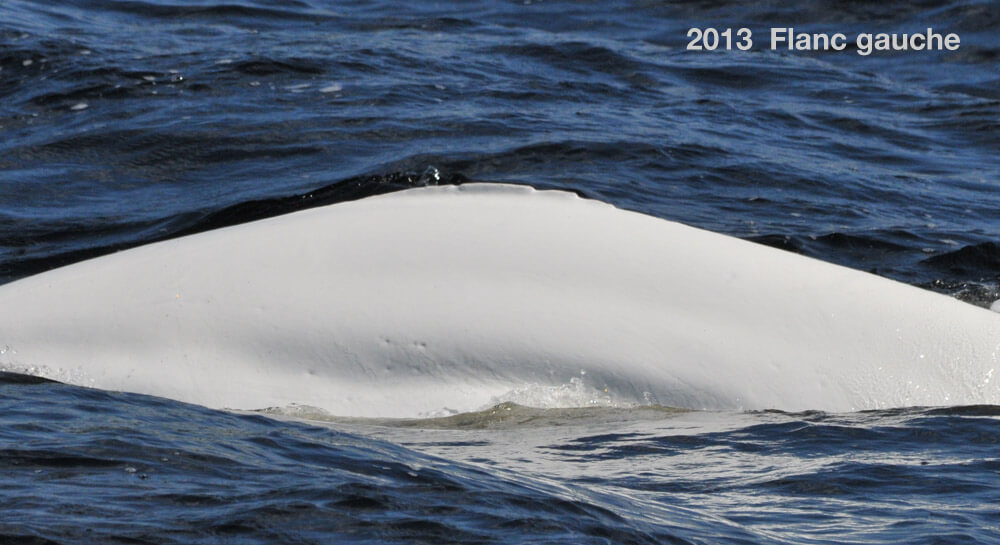 Ever since our first encounter with DL0370 in 1990, he has always been recorded as being white. Belugas fade in colour from gray to white between the ages of 12 and 16. DL0370 would therefore have been born before 1978.

His large size, habits and associations overwhelmingly suggest that he is a male. His sex was confirmed by genetic analysis of a tiny piece of skin (biopsy) taken from his back in 2000. DL0370 is affiliated with one of the two networks of males that ply the waters of the Saguenay Fjord and the head of the Laurentian Channel.

Within these networks, bulls form stable groups of companions. These associations may play a role in belugas’ reproductive lives. Faithful companions of DL0370 include DL0269 and Jetstream. Surprisingly, DL0370 and DL0269 are very rarely seen with any of Jetstream’s other faithful companions. In fact, the quartet formed by Jetstream, Frimas, Camério and Dance-Sea was one of the first groups to tip off researchers concerning the formation of clans amongst male belugas.

How the story of DL0370 and his companions unfolds will teach us volumes on the evolution of belugas’ social lives. By better understanding how belugas live, we will better be able to protect them.

The summer of 2016 – our 32nd season at sea with the belugas – was once again rich in encounters and surprises. Amongst other sightings, we saw DL0370 on August 30 in a herd of males with his faithful companions, DL0269 and Jetstream. Ever since our first encounter back in 1991, we have been closely following DL0370’s associations. DL0269 is his most regular companion. In more than one out of every three encounters, they are together.

August 30, 2016: We take advantage of the gorgeous weather to visit the downstream sector, where we regularly come into contact with herds of males. We cross paths with DL0370 off Îles aux Basques. He’s in a herd of some sixty individuals, including adults and a few gray individuals. The herd is split into about ten groups of six at fifteen belugas. We also recognize males JP, Douxi and DL0269.

The animals are scattered and highly active. Some belugas poke their heads above the surface as if to spy on us, others are spitting out water. They’re swimming dynamically and in one distinct direction when they suddenly stop, dive and resurface several times at the same spot. They’re probably feeding. The encounter with DL0370 is also very rich in terms of acoustics. We hear all kinds of vocalizations: door squeaks, whistles and much more. Belugas are aptly nicknamed “canaries of the sea”.