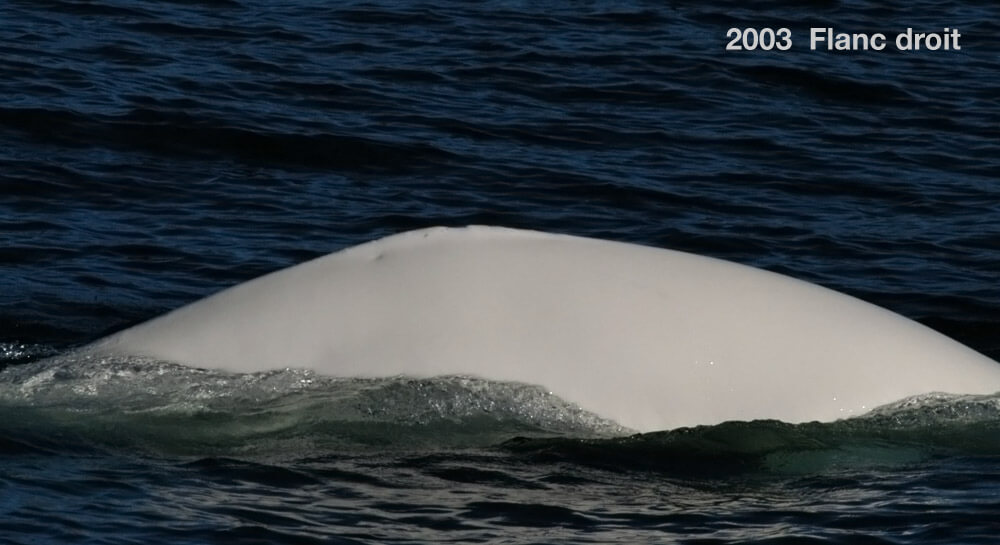 To identify Be-LOU-ga one needs to examine the particularities of his dorsal crest, namely a broad gash in the centre. On his right side, there is also a small spot in the middle of the crest and a depression below and behind this spot. 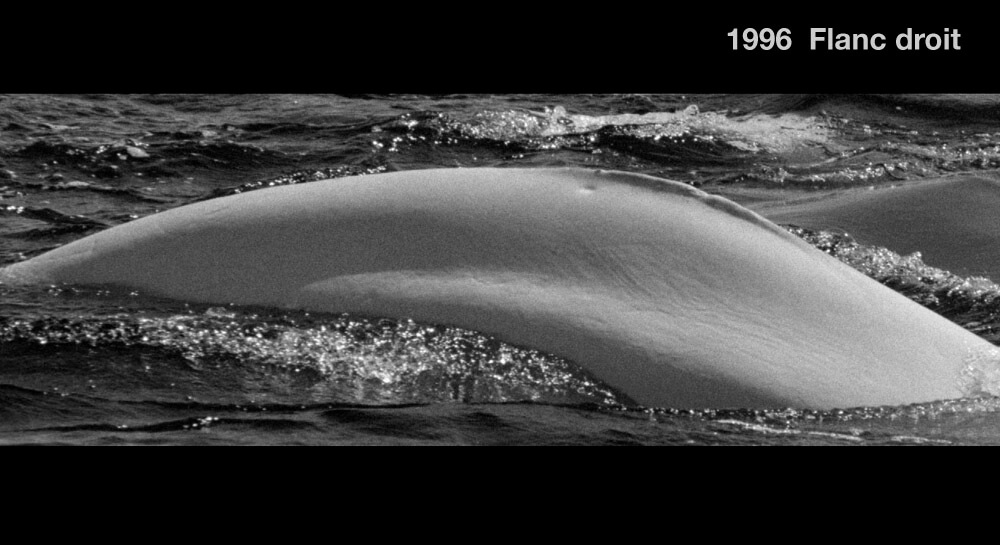 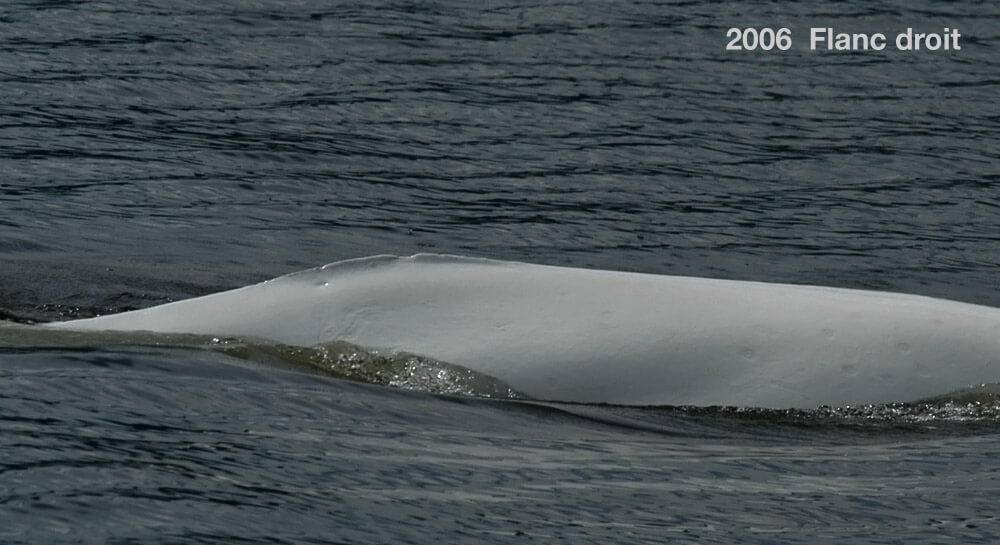 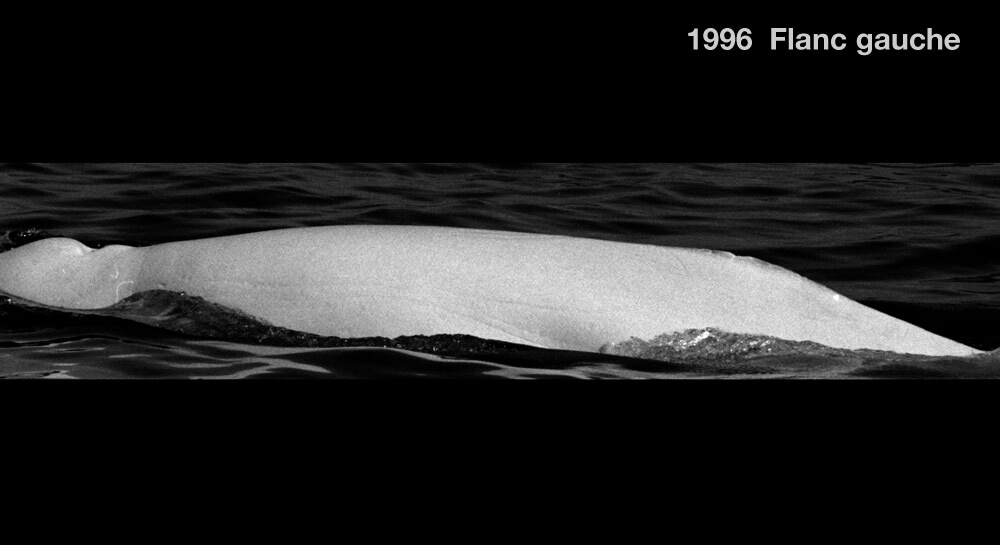 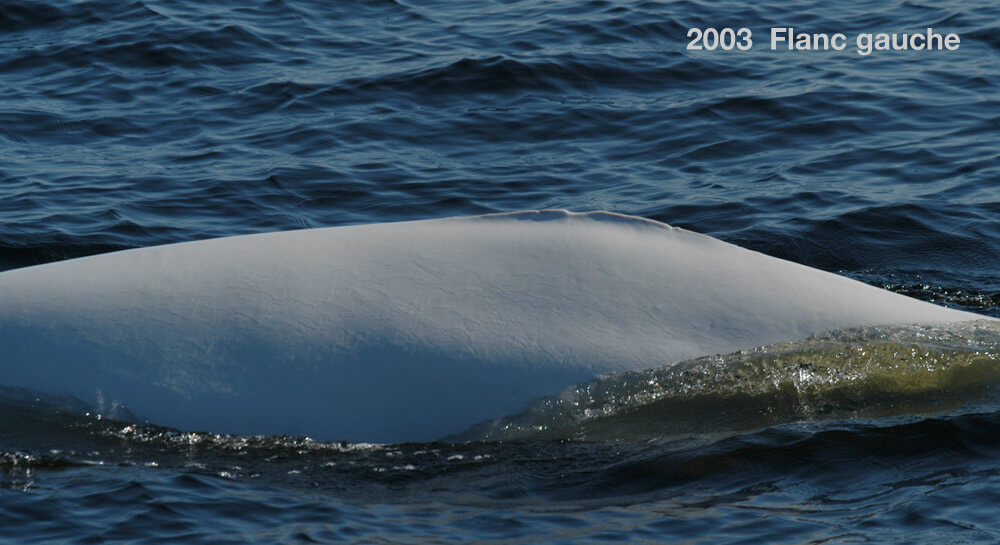 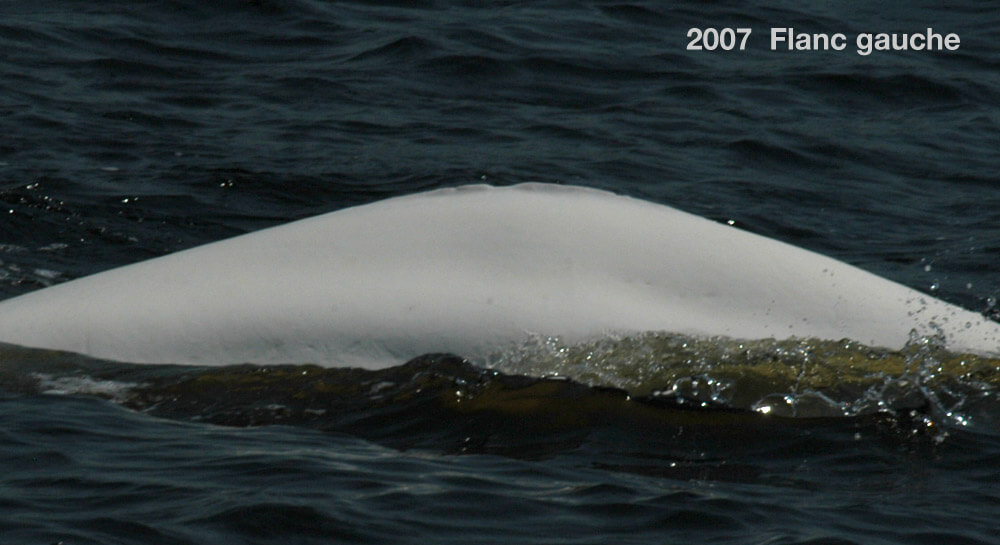 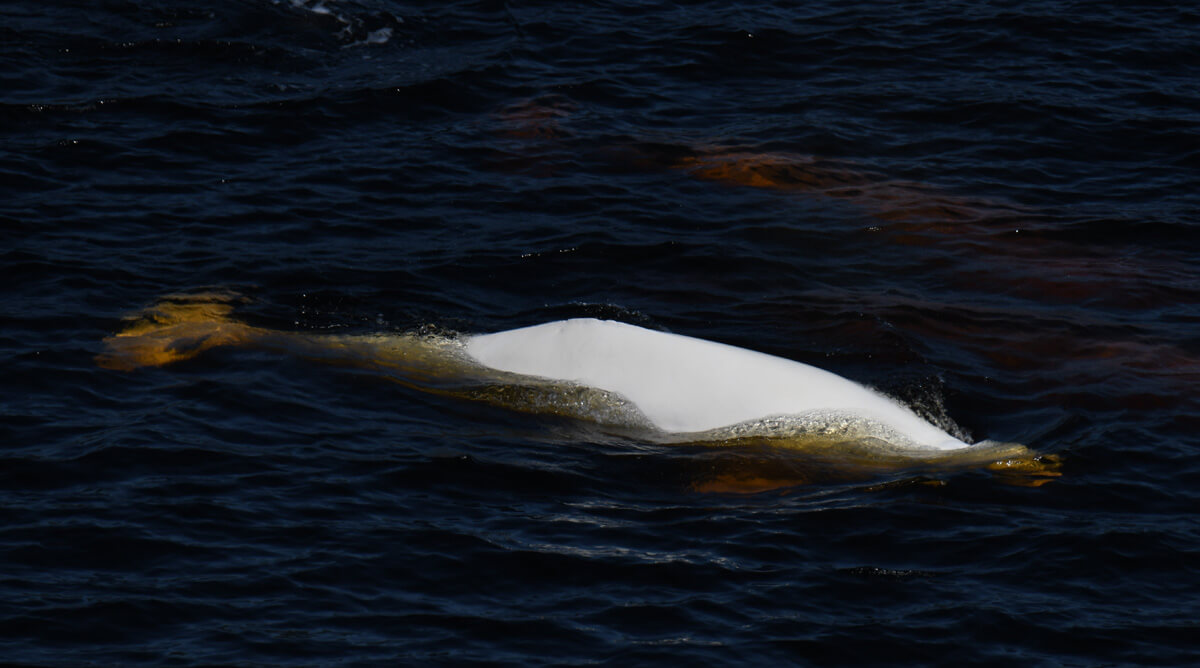 The first time Be-LOU-ga was photographed in 1991, he was already pure white. Belugas fade from gray to white in colour between the ages of 12 and 16. Be-LOU-ga was thus born before 1979.

His large size and associations suggest that Be-LOU-ga is a male. The doubt would be lifted in 2003 with the results of the genetic analysis of a biopsy taken from his back.

Be-LOU-ga is observed in herds of predominantly adult bulls. He is affiliated with one of the two networks of males that ply the waters of the Saguenay Fjord. Another network of males, known as the “Downstream Boys”, also uses the head of the Laurentian Channel sector and the downriver portion of the Estuary. Even if their territories overlap, individuals from one network seldom come into contact with males of other networks.

Within these networks, males tend to form stable groups of companions. These associations are established gradually and may play a role in belugas’ reproductive lives. Be-LOU-ga’s faithful companions are Jeststream, DL0370 and DL0373, other bulls that frequent the waters of the Saguenay Fjord.

How Be-LOU-ga’s story unfolds will teach us volumes on the evolution of belugas’ social lives. By better understanding how belugas live, we will be able to better protect them.

Photographing belugas from Pointe-Noire is a challenge! This is where photo-ID work on St. Lawrence belugas began in the 1970s. From the viewing platform, one can gaze out toward the horizon and spot belugas arriving from afar. The problem is, these little white backs don’t always come close enough for us to take their picture. That morning, even though the search assistant tallies as many as 80 belugas, very few groups come close enough for her lens to take a clear enough picture for ID purposes. Fortunately, Be-LOU-ga can be recognized by the notch in his dorsal crest. Together with his group, he heads toward the Saguenay. The research assistant’s heart skips a beat: both ferries pass through where the belugas are swimming, but the animals dive at the last moment. A few seconds later, they all emerge unscathed farther up the Fjord. Now an inflatable watercraft is approaching. Belugas live in a very high traffic environment!

On board the BpJAM, the GREMM’s research craft, we set sail out of Tadoussac in search of belugas to photograph. We head down the St. Lawrence toward Les Escoumins. En route, we scan the surroundings in search of white backs. Finally, at 11:05 that morning we finally spot our first herd, which numbers between sixty and eighty individuals. The herd splits into smaller groups numbering about ten animals each. Nearly all of them are pure white, meaning they are adults. Thanks to our photos, we are able to identify Be-LOU-ga, Nikamun, DL0014 and DL0240, all of which are males. Be-LOU-ga and Nikamun have often been seen together over the years. Male belugas tend to form long-lasting associations, which might help them when it comes time to breed. Further research may help us shed more light on this question.

Last winter, our research assistants undertook the meticulous analysis of some 13,000 photos collected throughout the summer of 2018.Thanks to this exercise, we were able to conclude that we spotted Be-LOU-ga at least once. Here is a description of this encounter.

A gentle swell rocks the BpJAM off the coast of Trois-Pistoles. We are photographing the belugas and filming them with a drone in order to study their behaviour. A herd of fifteen or so individuals is swimming nearby. It is split into adult-juvenile pairs, with each duo a few metres away from the next. Individuals approach, pair up and go their separate ways up again, making it difficult to census the animals. Another herd of about fifteen belugas arrives; we count 10 adults and 4 greys swimming in tight formation. Amongst the adults, we recognize males Nikamun, DL0370, Mirapakon,  Be-LOU-ga and Jetstream. The dynamics change, the belugas become more active and intermingle. We patiently learn to better understand DL024, his habits and who his acquaintances are.

The summer of 2016 – our 32nd season at sea with the belugas – was once again rich in encounters and surprises. Of particular note, on August 30, we saw DL0248in a herd of males.

August 30, 2016: we take advantage of the gorgeous weather to visit the downstream sector, where we regularly come into contact with herds of males. We cross paths with DL0269  and DL0248 off Îles aux Basques. He’s in a herd of some sixty individuals, including adults and a few gray individuals. The herd is split into about ten groups of six at fifteen belugas. We also recognize males JP, Douxi and DL0370.

The animals are scattered and highly active. Some belugas poke their heads above the surface as if to spy on us, others are spitting out water. They’re swimming dynamically and in one distinct direction when they suddenly stop, dive and resurface several times at the same spot. They’re probably feeding. The encounter with DL0269 is also very rich in terms of acoustics. We hear all kinds of vocalizations: door squeaks, whistles and much more. Belugas are aptly nicknamed “canaries of the sea”.

We are on the north shore of the Upper Estuary, between Baie-Saint-Paul and Tadoussac. We observe a herd of some thirty individuals comprising adults and young, including one newborn. However, we are somewhat hindered by the fog and it is difficult to take an accurate count of the herd. We notice DL0248 in the company of another male, Nikamun. They are swimming near two known females: Céline and Annakpok. The entire herd is very active: the belugas are swimming in synchronized fashion and then all of a sudden they stop, dive, and resurface several times at the same spot. We can’t confirm it, but these are probably feeding sessions. Working conditions are difficult, with strong winds and ever larger waves complicating our jobs. Nevertheless, we do manage to take biopsies from two individuals.

At the mouth of the Saguenay, DL0248 is swimming in a herd of some thirty belugas, essentially consisting of young grays. We follow closely behind the herd. It is difficult to advance, as we’re in the middle of a strong current with irregular waves. Circling above us are several Bonaparte’s gulls.

The mouth of the Saguenay is a meeting place! Here, networks of male belugas regularly cross paths with those comprising females and young. Large but short-lived herds form here due to the high concentrations of food. This is also where the salt water of the Lower Estuary and the brackish waters of the Saguenay come together. The topography, currents, tides and characteristics of the water masses that meet here create highly unique oceanographic conditions that trap prey, which in turn attract marine mammals and birds.

The team of Red Rock Films adopted Be-LOU-ga on August 19.