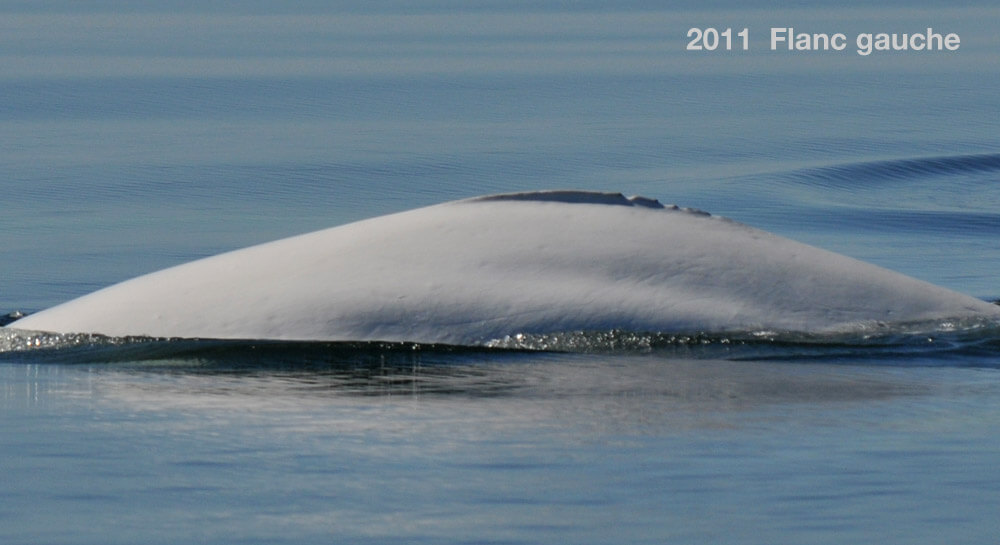 The key to recognizing Mirapakon is his dorsal crest, the rear portion of which is marked by deep, broad gashes. 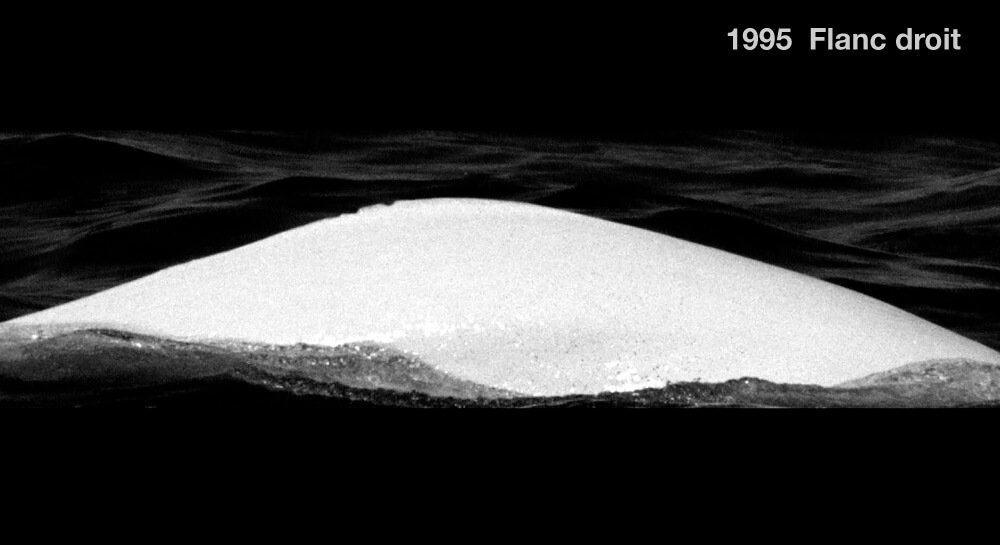 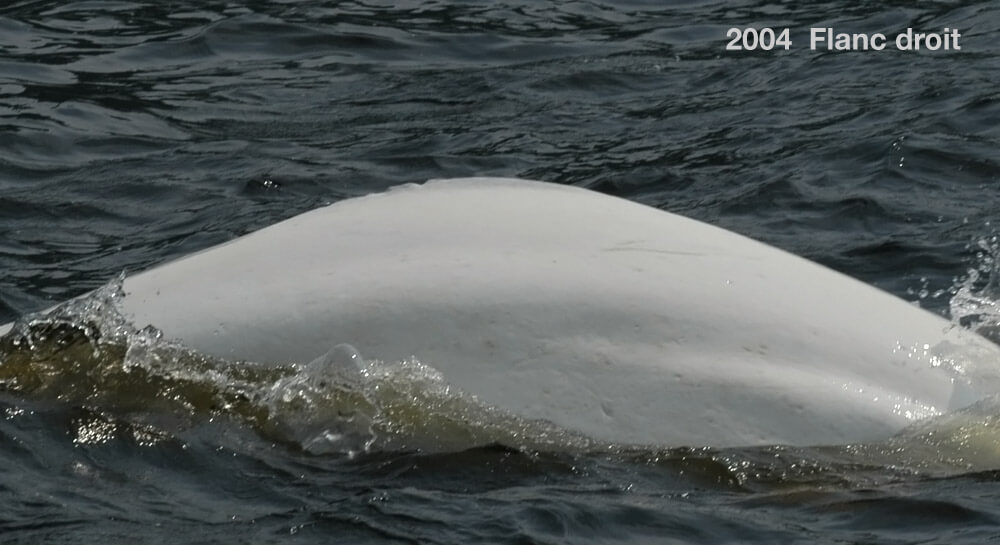 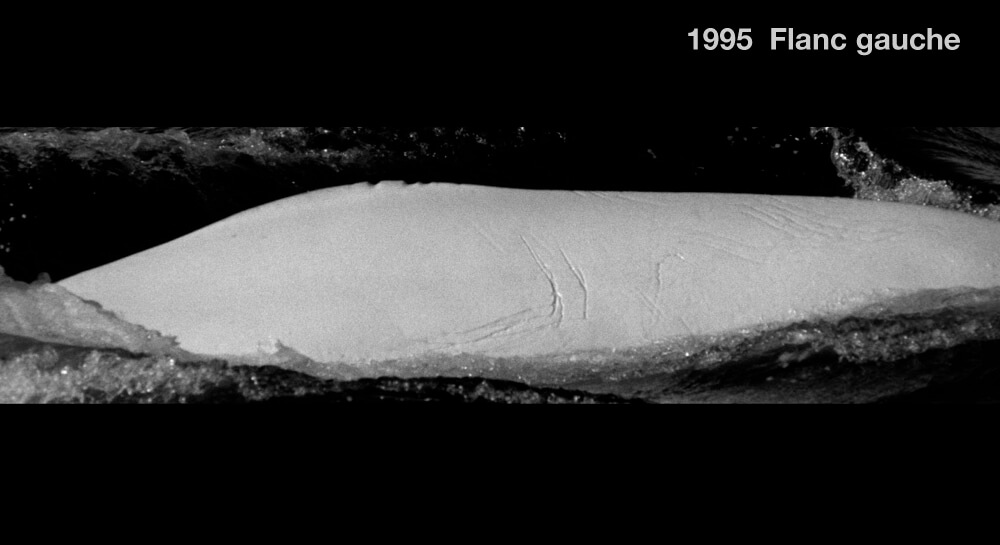 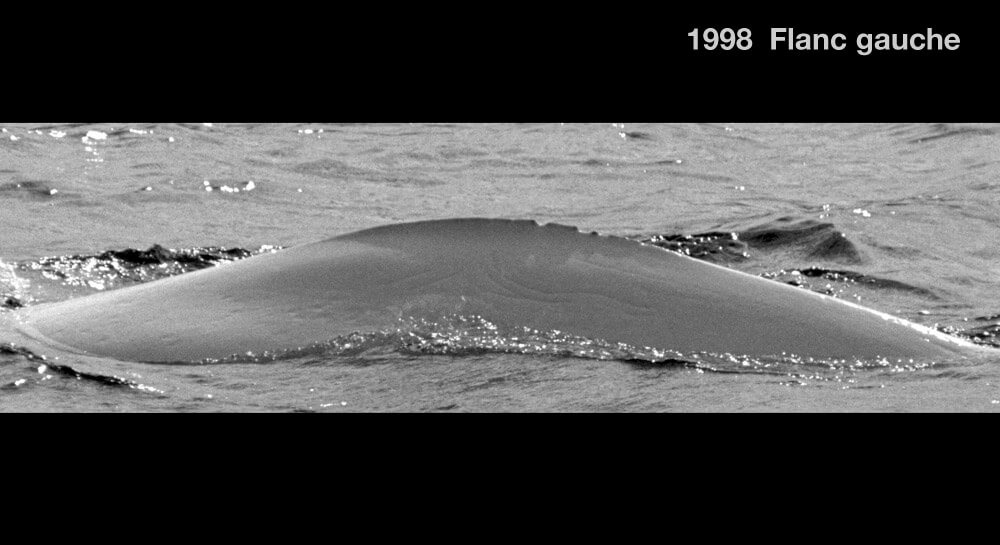 Mirapakon was already white when he was first photographed in 1990. Belugas fade from gray to white in colour between the ages of 12 and 16. Mirapakon would therefore have been born before 1979.

In summer, Mirapakon is usually observed in the northern portion of the Estuary, between Tadoussac and Les Bergeronnes, or in the Saguenay River. He is regularly spotted in herds made up exclusively of adult males.

His large size, habits and associations strongly suggest that Mirapakon is a male. He is a member of one of the two networks of males that regularly use the Saguenay Fjord. A third male network, the “Downstream Boys”, is known to use the same portion of the Estuary, but steers clear of the Saguenay. Even if their territories overlap, individuals from one network seldom rub fins with males of other networks.

Within these networks, belugas tend to form stable groups of companions. Mirapakon’s most regular companions are Jetstream, DL0295, DL0269 and DL0159. These associations, which are established gradually in adulthood, may play an important role in belugas’ reproductive lives.

How Mirapakon’s story unfolds will teach us volumes on the evolution of belugas’ social lives. By better understanding how belugas live, we will better be able to protect them.

We take advantage of the gorgeous weather to visit the downstream sector, where we regularly come into contact with herds of males. We cross paths with Mirapakon off Îles aux Basques. He’s in a herd of some sixty individuals, including adults and a few gray individuals. The herd is split into about ten groups of six at fifteen belugas. We also recognize males JP, Douxi and DL0370.

The animals are scattered and highly active. Some belugas poke their heads above the surface as if to spy on us, others are spitting out water. They’re swimming dynamically and in one distinct direction when they suddenly stop, dive and resurface several times at the same spot. They’re probably feeding. The encounter with Mirapakon is also very rich in terms of acoustics. We hear all kinds of vocalizations: door squeaks, whistles and much more. Belugas are aptly nicknamed “canaries of the sea”.

Our boat is offshore, opposite the Grandes Bergeronnes River. Visibility is excellent. Early in the encounter, about ten adults are dispersed one by one. In less than an hour, they are joined by some forty other adults. They form groups of up to ten individuals swimming side by side. Their frequent changes of direction suggest that they are hunting for food. DL0204 is identified swimming in the company of Vita, Frima and DL0014.

On board the Bleuvet, we observe a herd of about thirty belugas at the mouth of the Saguenay. We are at the tail end of the herd and slowly working our way back to the head, taking care to photograph each and every individual. One of the belugas has conspicuous markings: it’s Mirapakon. He is swimming with seven other belugas. During this encounter, we were also able to recognize John A. Macdonald, DL0370, DL1995, DL0248, Jetstream, GraCy, Stanley, DL2214 and Or Blanc.