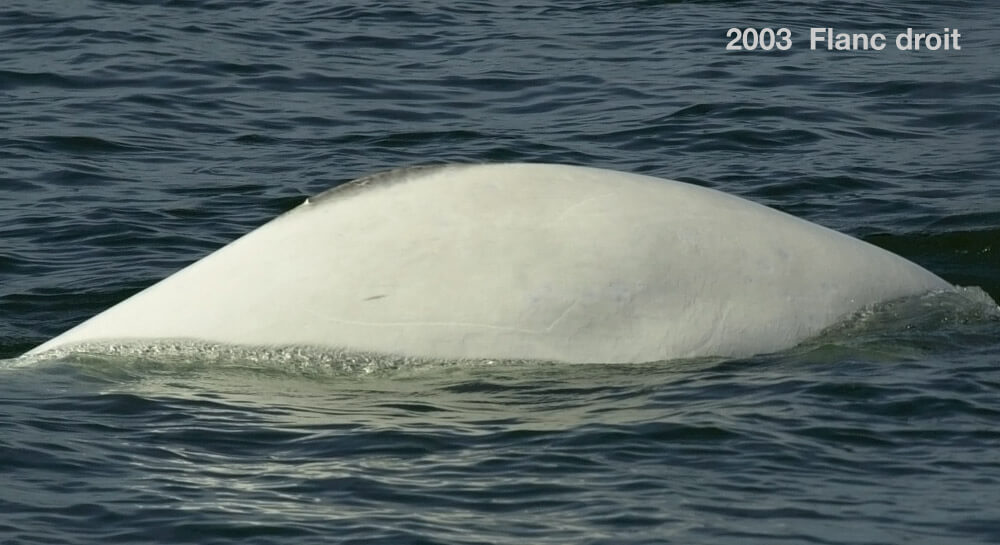 Aquabelle can be recognized first and foremost by the gash that forms a right angle at the end of her subtle dorsal crest. If one looks carefully, a small gray line can be seen on her right flank, below the crest. 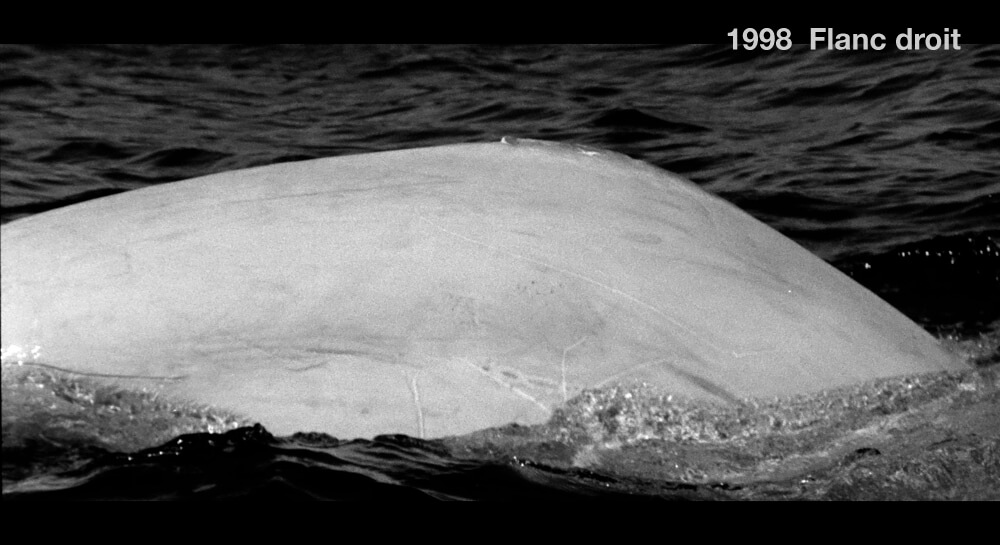 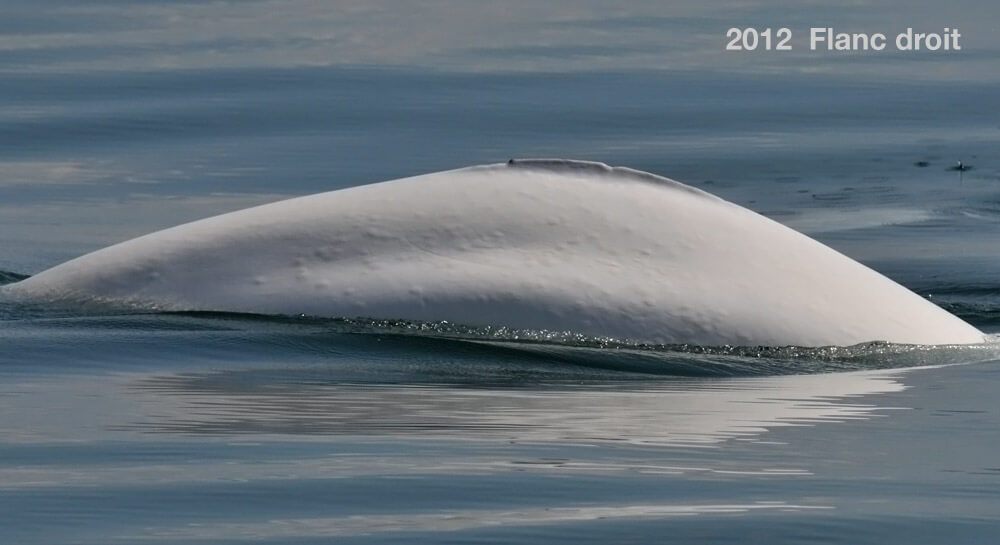 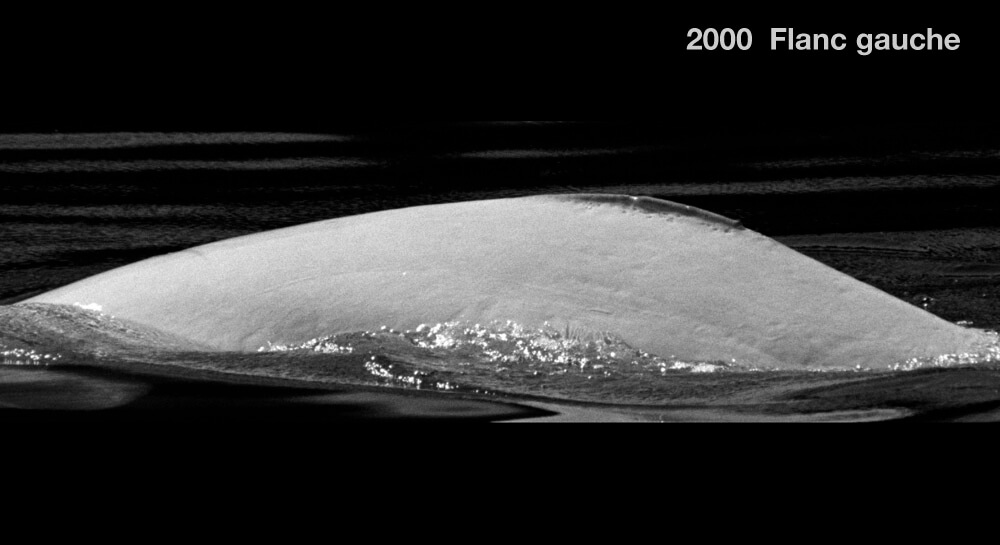 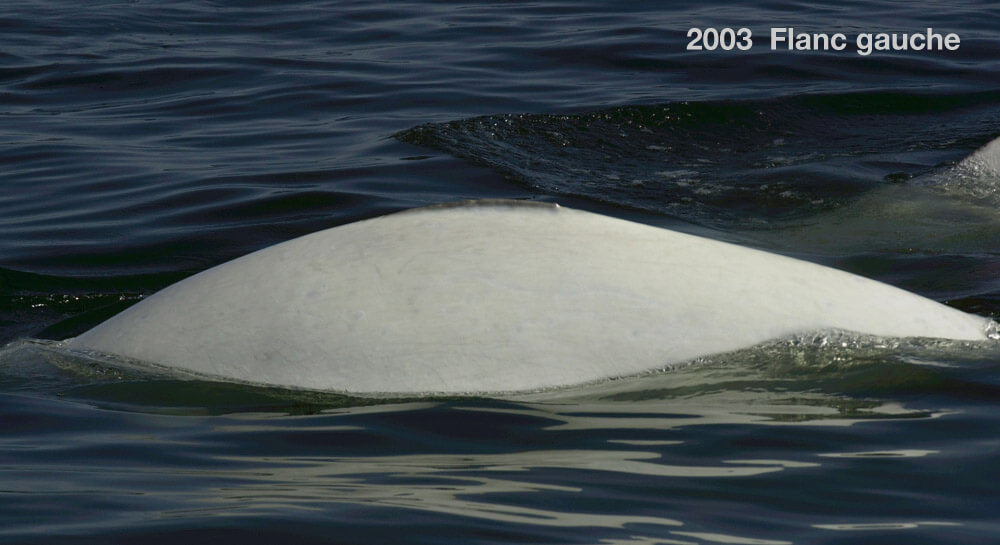 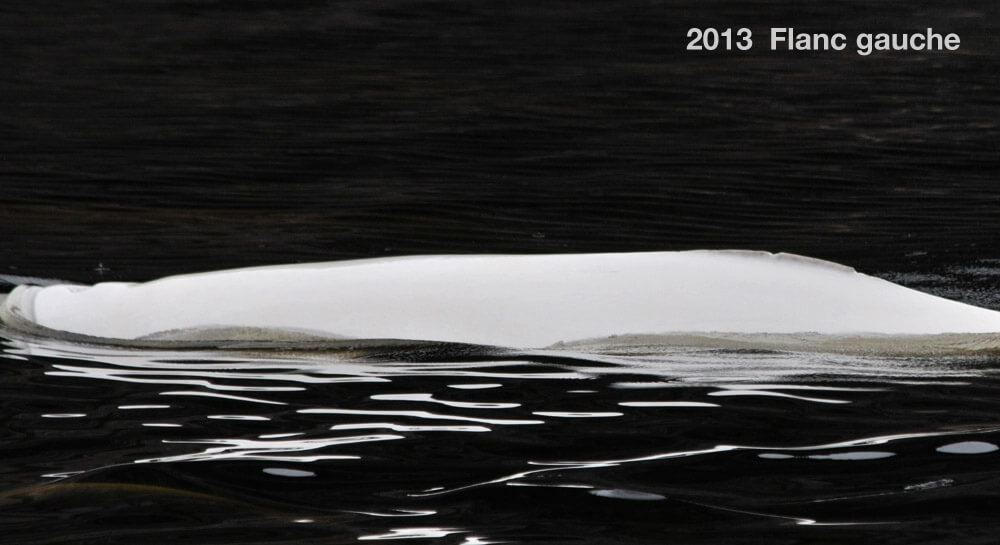 Our first encounter with Aquabelle goes back to 1998. At the time, she was slightly grayish in colour. She turned white around 2006, though her dorsal crest remained black. Belugas fade from gray to white in colour between the ages of 12 and 16. Aquabelle would therefore have been born around 1990.

In their summer range, females form large communities in which they tend to newborns and young. These communities are associated with traditional territories. Associations between females of the same community are generally not stable and can vary according to the females’ reproductive status, for example if they are pregnant or accompanied by young.

Aquabelle has been regularly observed with very young belugas and at least once with a calf, in 2001. However, to date our observations have not yet allowed us to determine with certainty whether or not these were her own offspring. More in-depth data analysis will help shed light on her reproductivity.

Although we usually encounter Aquabelle in the Saguenay and its mouth, this time we photograph her near the south shore of the St. Lawrence, not far from Île aux Basques. She is swimming in a herd of thirty to forty belugas, mainly individuals that are still grey and therefore relatively young. The belugas are rather calm. Are they just visiting? Did they follow prey farther than usual? Belugas still have many mysteries to reveal!

To track belugas from atop a tower, you need a second set of eyes in the back of your head! We are stationary while the animals are constantly moving. Using her drone, an assistant is able to track the movement of a small group, even if a few individuals slip out of our sight at the same moment. This is what happened just as we were taking delight in having a herd of 30 to 50 belugas in close proximity. Mixed in with the group are numerous juveniles and a few newborns. The herd splits into several smaller groups. We’re able to identify Yogi, Blanchon and Aquabelle, three females that are often observed together. Meanwhile, a sound is picked up and amplified by our hydrophone: a freighter is approaching. We are surprised to see that it’s actually two freighters arriving, one heading upstream, the other moving down the Saguenay. Within a few minutes, the belugas disappear from Baie Sainte-Marguerite. We were unable to photograph all the individuals before they took off. We patiently learn to better understand Aquabelle’s life and who her acquaintances are.

No sooner have we left the Tadoussac wharf aboard the Bleuvet when a strong northwesterly wind kicks up. Having reached the mouth of the Saguenay, we observe a herd of about 60 animals including adults, juveniles and four newborns. Aquabelle is swimming with four other adults. Not far away from them is another group of eight stocky individuals, probably males. Part of the herd is moving vigorously toward the Charlevoix coast. The crew on board positions itself to try to take a biopsy from one of the animals. The dart is fired but misses its target. There’s always next time!

This summer, we crossed paths with Aquabelle on at least two occasions. During these encounters she was swimming in proximity to newborns, though our observations did not allow us to confirm whether or not any of these individuals were indeed her own offspring. Below is an account of one of these encounters.

September 9, 2015: Aquabelle is swimming in a group of six individuals – three adults and three young – in close proximity to Pointe Rouge at the mouth of the Saguenay Fjord. She and her cohorts are swimming side by side in highly synchronized fashion. We attempt a biopsy on one of the individuals in the herd. This little piece of skin and blubber will reveal more about this animal, including its genetic “secrets” and maybe even its family ties with Aquabelle! Collecting a biopsy from a moving target is no small task. With practice, we’ve managed to attain a success rate of over 80%. Which is why, when we do manage to hit our target, the excitement on board the boat is palpable!

August 26, 2013: we’re focusing our efforts on the Saguenay given the fog and wind conditions prevailing in the Estuary. Some forty belugas, including Aquabelle, are in Baie Sainte-Marguerite. Among them are some fifteen animals, motionless at the water surface, engaging in what is known as “logging”. An hour later, the group, which has grown to include young and six calves, starts to become very active. Pectoral fins are emerging from the water; the animals are moving about briskly. Just before leaving the sector, we successfully take a biopsy sample from one of the belugas.

Arriving off the coast of Rivière-du-Loup, we encounter a herd of 30 individuals, including white adults, young grays as well as two newborns. Aquabelle is accompanied by a newborn, but we are unable to confirm whether or not it is her own. The animals are separated into three groups of six to eight individuals. One of the groups leaves the herd to head downstream. After an hour of tracking, the herd splits up into eight smaller groups in which the animals are swimming in tight formation. Now we tally 40 belugas. The animals are swimming along the reef of Île Blanche, an island known for its bird concentrations, including an important colony of common eiders.