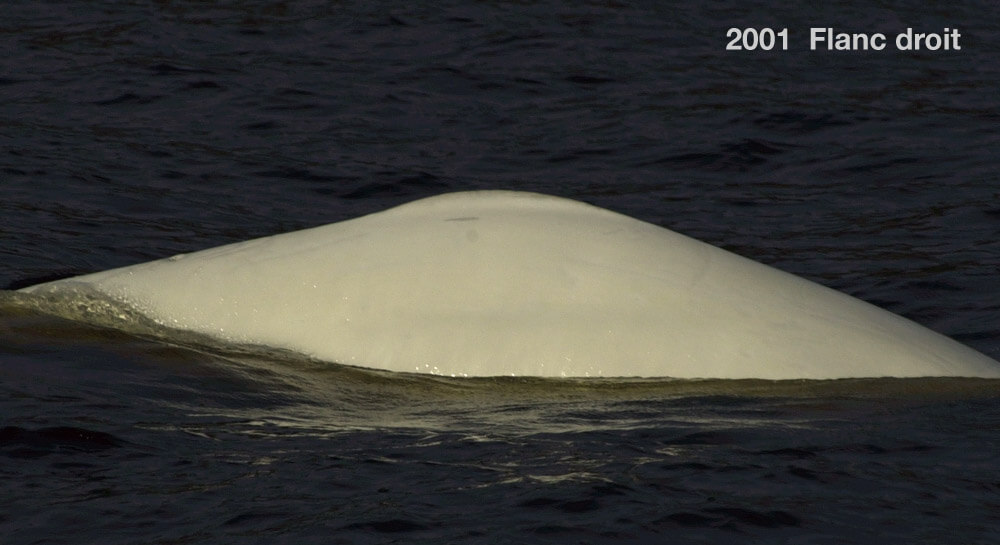 How to recognize her

Serena can be identified by her prominent and grayish dorsal crest, as well as the small but deep scar on her upper flank around her peduncle. She also shows a gray line on her right side, below the crest. 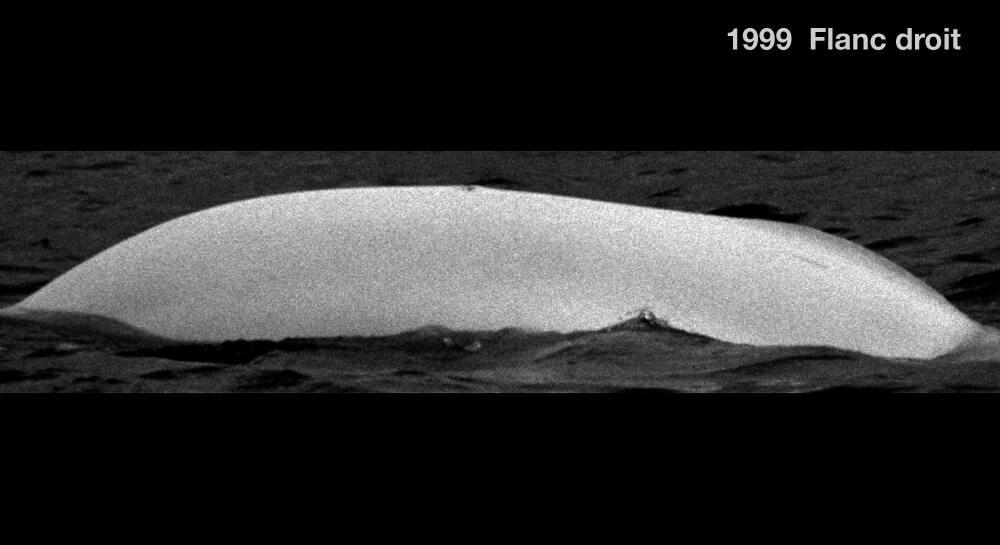 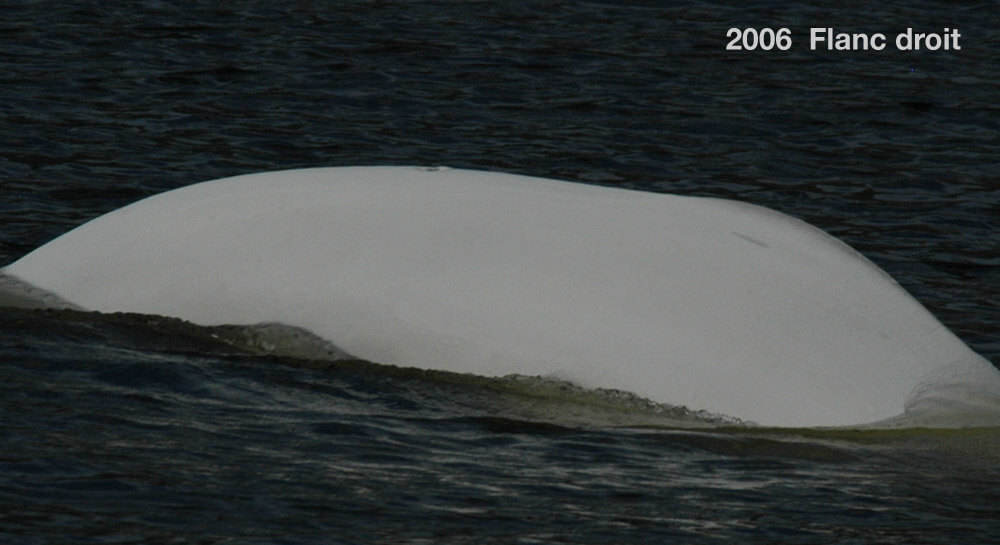 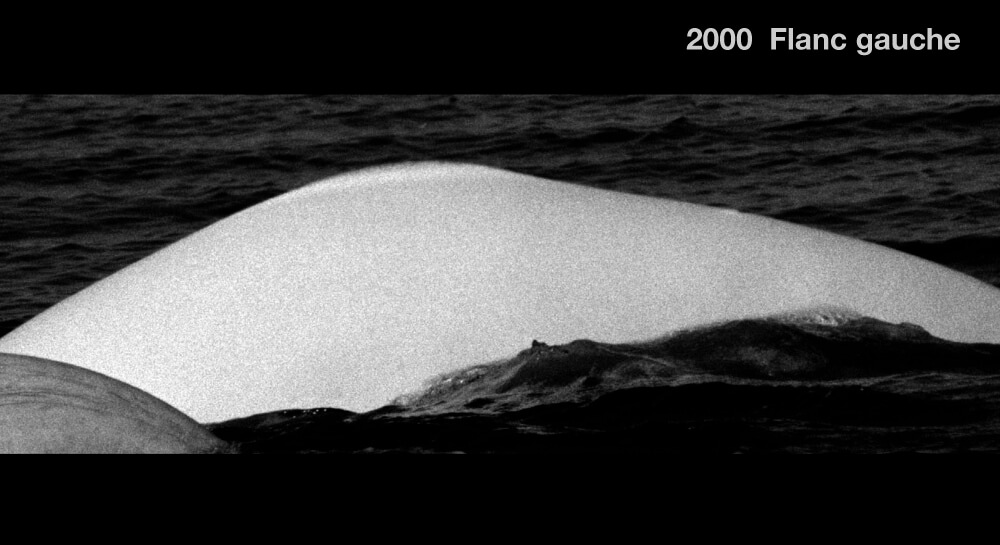 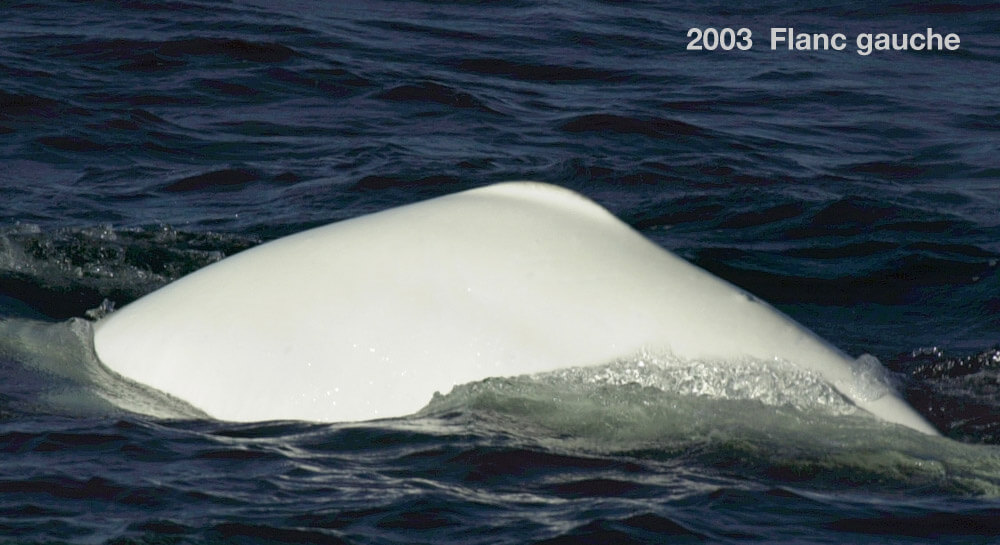 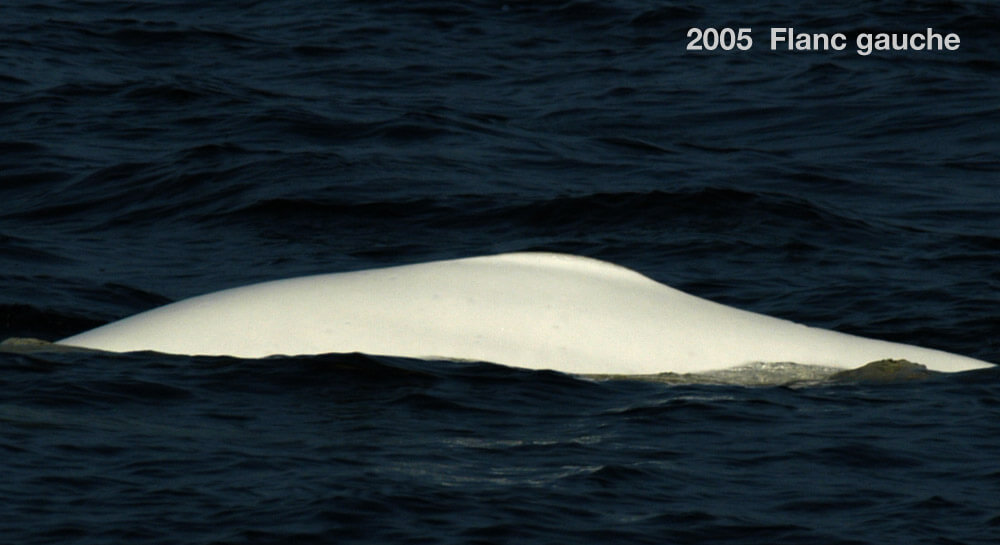 The first encounter with Serena dates back to the summer of 1977. She was photographed by St. Lawrence beluga research pioneer Leone Pippard and her team at the mouth of the Saguenay. Belugas fade from gray to white in colour between the ages of 12 and 16. She was already all white at that time, meaning that her birth goes back to at least 1965! Belugas can live to be 60 or even 80 years old.

Her size and associations suggest that Serena is a female. In the belugas’ summer range, females form large communities in which they care for newborns and young. These communities, the formation of which is partially based on matriarchal lineages, are faithful to traditional territories and exchanges between them are uncommon.

Serena belongs to the same Saguenay community as her companions DL0030, DL0246 and Slash (who died in 2013). Associations between females of the same community are not stable, however. They may vary depending on the females’ reproductive status and whether or not they are pregnant or accompanied by a calf.

Serena remains a mystery for our team, as since 1977 we lost track of her during two periods: from 1992 to 1998 and from 2006 to 2012. Perhaps because she is so easily overlooked with her small scar on her upper flank.

Serena is in a group of about twenty individuals, close to Anse Saint-Étienne (Saint-Étienne cove) in the Saguenay Fjord. Visibility is excellent, despite heavy cloud cover. The herd is composed of adult and young belugas, including four newborns. DL1050 is swimming in the company of two females well known to the field team, Céline and Athéna. They’re heading slowly toward Baie Sainte-Marguerite, which is often the final destination of herds swimming up the Saguenay Fjord. To this day, it is still unknown why belugas are particularly fond of this bay. Once they reach the bay, they sometimes stay there and swim in circles for hours.

GREMM’s research boat – The Bleuvet – is positioned off the coast of Île Rouge. We observe a herd of about 30 belugas consisting of adults, juveniles and one newborn. Not far from them are also four seals. Serena is swimming in the company of four other belugas, including a young gray. Elsewhere in the herd we recognize the female Pacalou and the male GraCy. Surprise! We see feces appear on the surface. Even if for most people, any type of excrement is disgusting, for researchers, this is a source of valuable data. Is it from Serena? We can’t say for sure.

We’re at the mouth of the Saguenay. Serena is swimming in the company of Vita, a male who regularly plies the waters of the Saguenay. The two animals are in a herd composed of some thirty individuals – adults, young and one calf – and are chasing prey trapped in a tide rip.

The mouth of the Saguenay is a meeting place! Here, networks of male belugas regularly cross paths with those comprising females and young. Large but short-lived herds form here due to the high concentrations of food. This is also where the salt water of the Lower Estuary and the brackish waters of the Saguenay come together. The topography, currents, tides and characteristics of the water masses that meet here create highly unique oceanographic conditions that trap prey, which in turn attract predators such as the beluga.