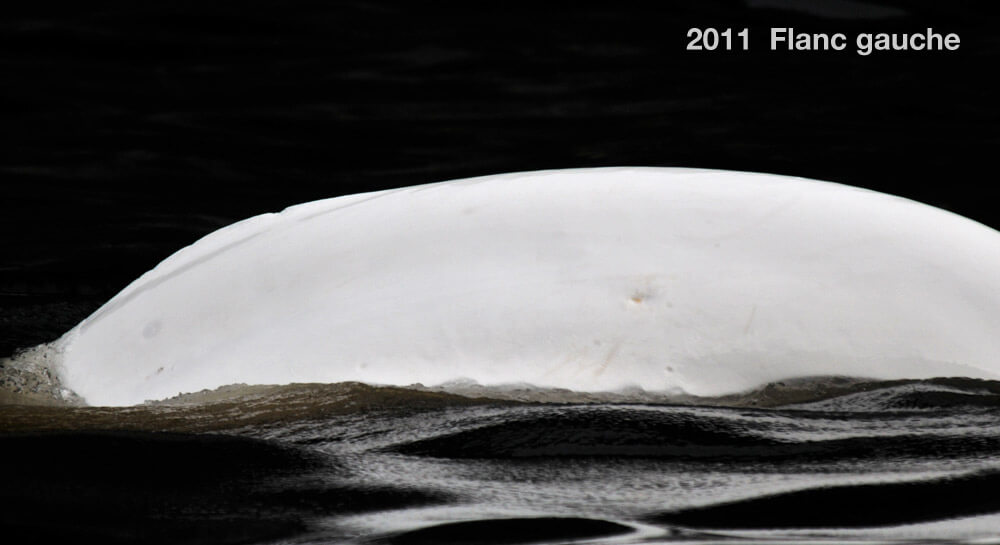 April is recognizable by the scar on her left peduncle consisting of two small dots very close to one another. Although they’re not very deep, the gashes in her dorsal crest nevertheless allow her to be identified from the right. 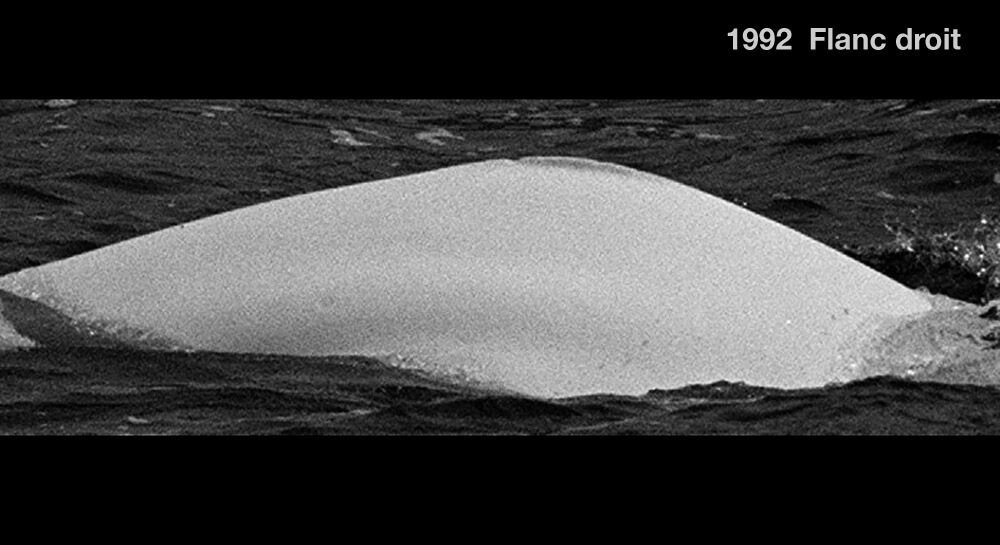 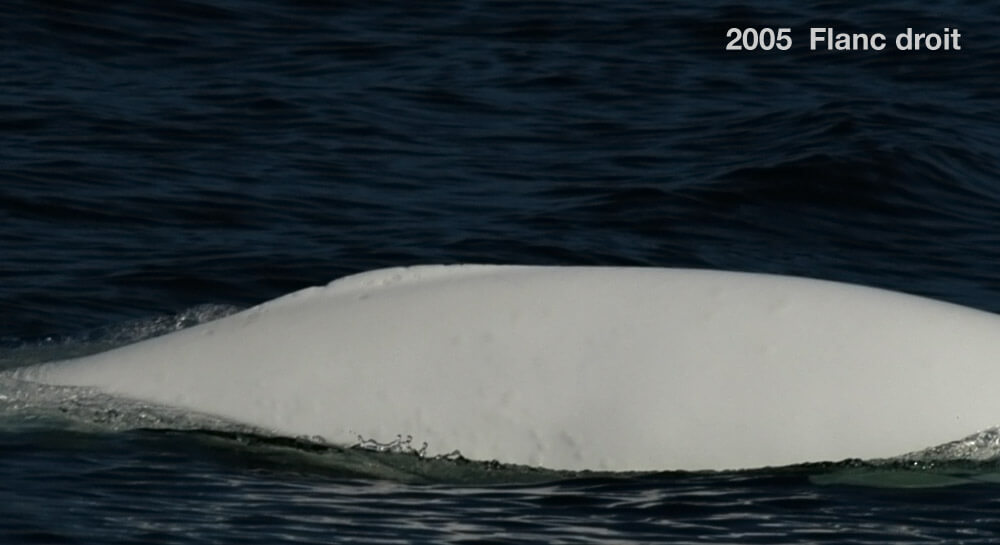 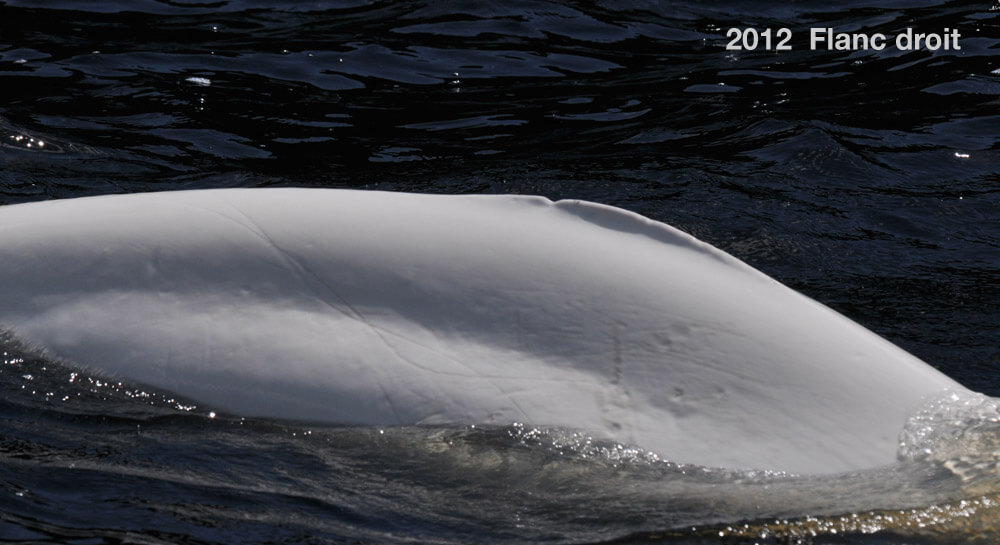 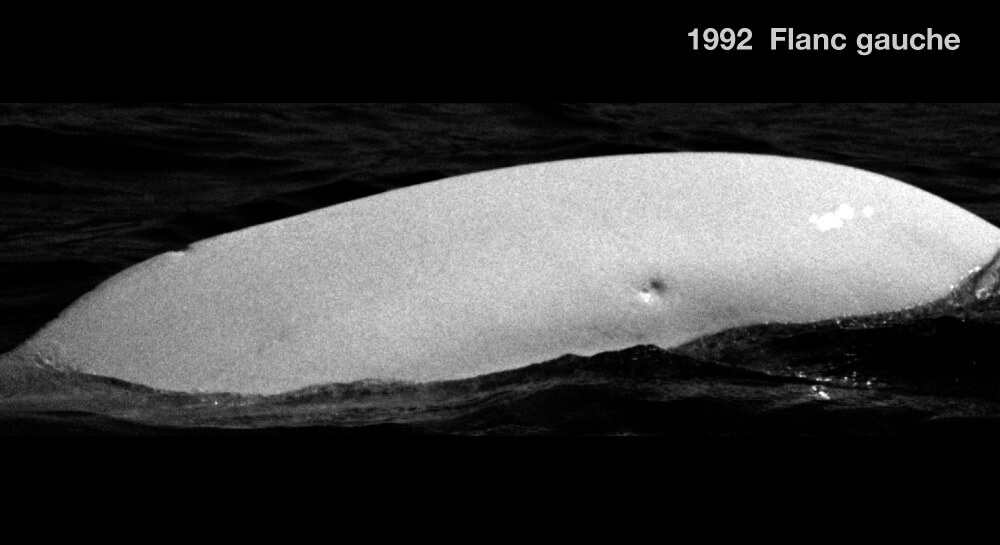 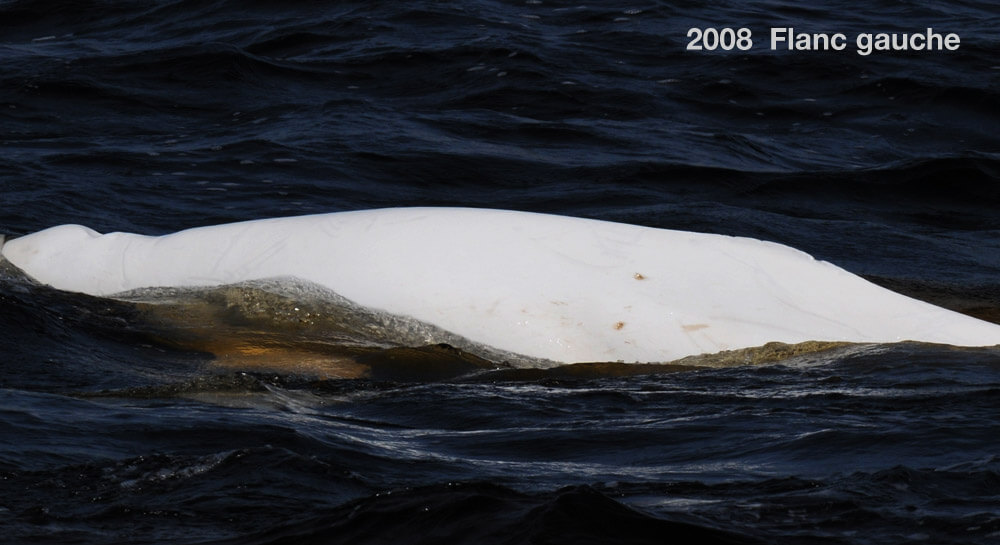 Our first encounter with April goes back to the summer of 1992. She was already white at the time. Knowing that belugas fade to white between the ages of 12 and 16, we surmise that April would have been born before 1980.

In their summer range, cows form large communities in which they tend to newborns and young. These communities are associated with traditional territories. Associations between females of the same community are generally not stable and can vary according to the females’ reproductive status, for example if they are pregnant or accompanied by young.

April has been regularly observed with very young belugas. However, to date our observations have not yet allowed us to determine with certainty whether or not these were her own offspring. It is difficult to establish mother-calf relationships with certainty. Eventually, once we’ve performed a biopsy, April’s DNA will reveal the details of her family tree.

April was spotted with the female DL0829 in a herd of some fifteen individuals in the Saguenay Fjord. During this encounter, we attempted to take a biopsy sample from one of the individuals present; we narrowly missed our mark. Manoeuvring a boat and collecting a biopsy from a moving target is no small task. With practice, we’ve managed to attain a success rate of over 80%. When we do miss our target, there’s always a feeling of disappointment on the boat. These data are invaluable and such opportunities don’t occur every day.

We’re observing April in the Saguenay Fjord, at Anse à la Boule to be exact. She’s swimming in a herd of 60 belugas making their way upriver along the shoreline. Within the herd, we notice a few entirely white individuals, though 50% of them are gray or slightly gray. We also observe one newborn.

After arriving in Baie Sainte-Marguerite, the animals break up into smaller groups and adopt behaviours typical of those observed in this bay, raising their tails and poking their heads out of the water. We hear all kinds of vocalizations: door squeaks, whistles and much more. We also observe a second newborn.

Many recreational boaters are enjoying the final days of summer in Baie Sainte-Marguerite. We’re also in the area, studying belugas aboard the Bleuvet. We encounter a herd of about 35 individuals, consisting of adults, juveniles and a newborn. Several belugas are logging, meaning they are resting at the surface like floating logs. Then, little by little, the animals start becoming more active, at which time we can see tails, pectoral fins and even their heads poking up out of the water. It is at this moment that we recognize within the herd April, who is swimming with Athéna.

We were not indifferent to the situation of this inhabitant of the St. Lawrence River. It is therefore only natural that we have decided to help it through a symbolic concept: adoption, which we hope will support organizations whose main interest is to protect our ecosystem and its biodiversity. In this way, we support scientific research, help to save an endangered species and highlight our commitment to the St. Lawrence and its inhabitants. On behalf of the entire team and members of the Regroupement des Plaisanciers du Québec (RPQ), we welcome April. 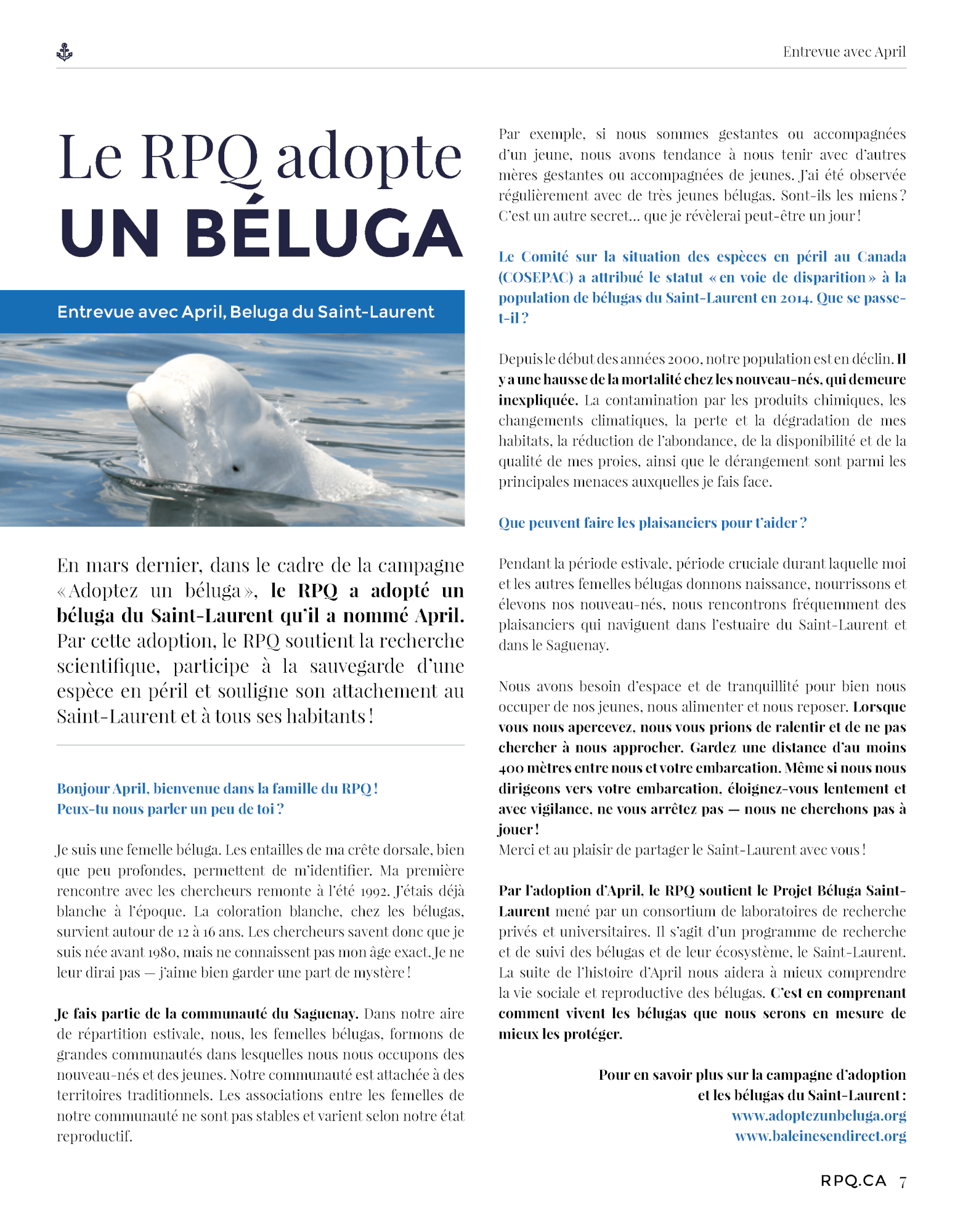