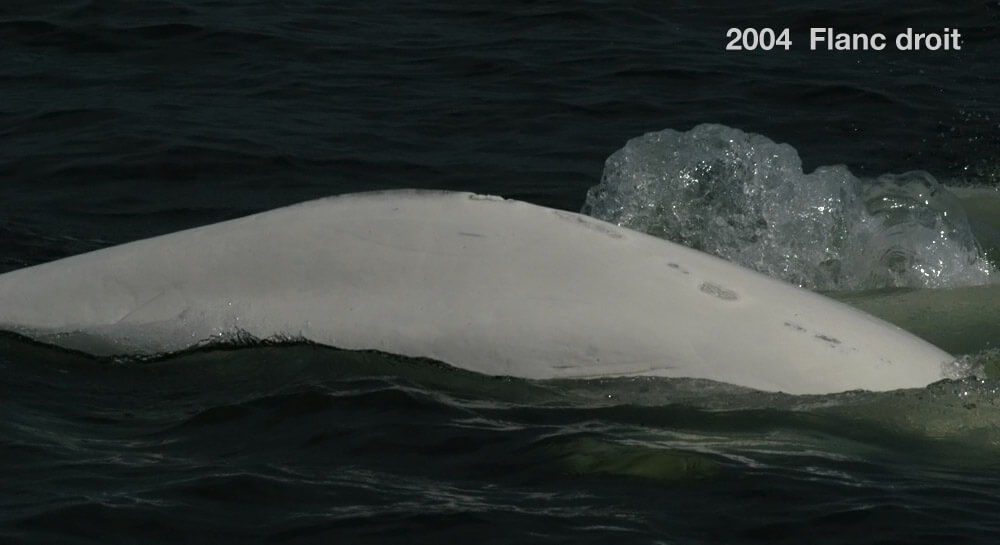 Novo is easily recognizable thanks to the scar on its left flank, on the front part of its dorsal crest. This individual is even more distinct from the right side, with a series of scars visible in front of its crest. 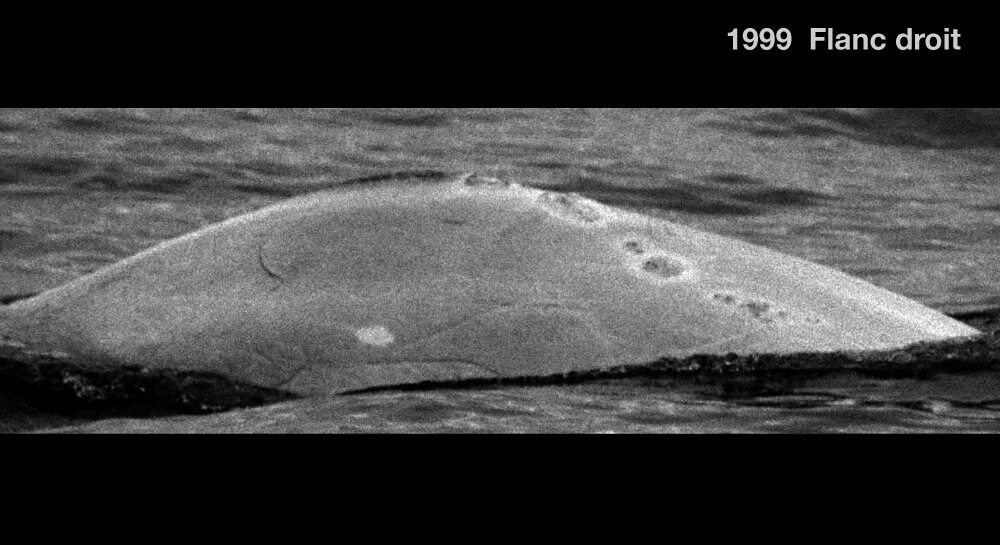 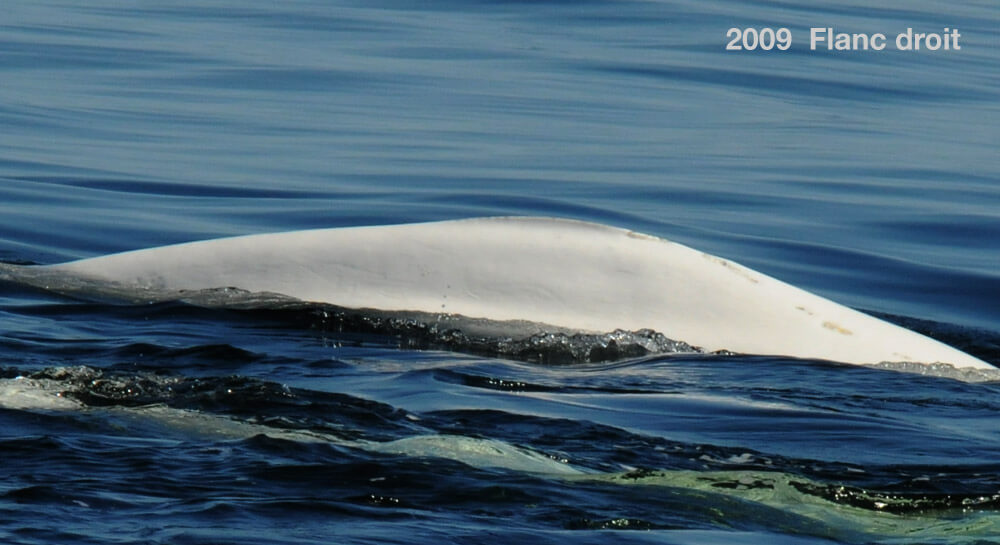 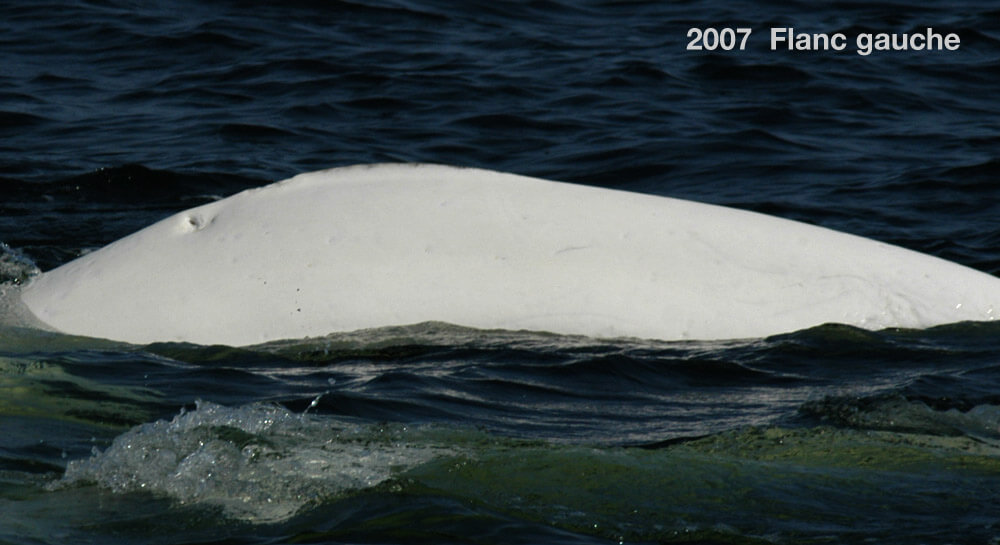 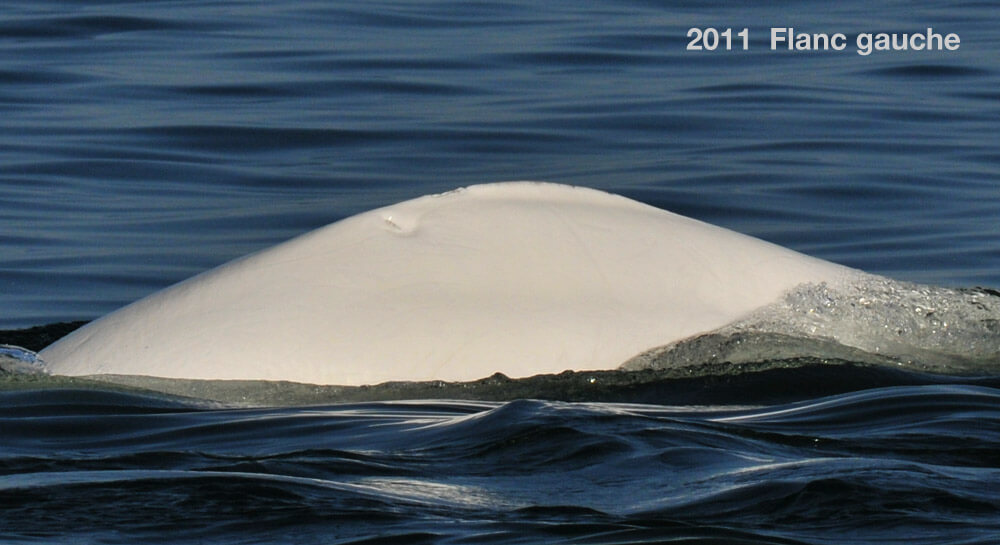 We first encountered Novo in 1994, at which time it was gray. Beginning in 2004, it was always noted as “white”. Belugas fade in colour from gray to white between the ages of 12 and 16. Novo would therefore have been born before 1990.

Novo is easily recognizable thanks to a deep scar on the front part of its dorsal crest. Nevertheless, we lost track of this individual between 1994 and 1999 and from 2000 to 2004.

At the current time, data on its associations and the sectors it frequents are insufficient to determine its sex with certainty. In summer, adult belugas exhibit a high degree of sexual segregation. Bulls and cows demonstrate clear preferences, as much in their social associations as in the sectors they patronize. This behaviour is not quite as pronounced in juveniles and young adults. To date, Novo has been observed in all sectors of the species’ summer range and in several herd types. Over the next few years, its social affiliations and movement patterns should reveal more about its identity.

The stories of young belugas and the chance to monitor the evolution of their behaviour are our best tools for understanding the social lives of this species. By better understanding how belugas live, we will be able to better protect them.

On board our inflatable research craft, the BpJAM, we head toward Les Escoumins to pursue our beluga photo-ID work. A light breeze blows from the southwest. We encounter our first herd, which comprises an estimated 45 to 55 belugas. They are very active and split into several smaller groups, making them difficult to tally. The animals are also taking long dives, further complicating our photography efforts. Nevertheless, one beluga catches our attention with its trail of scars near its dorsal crest: it’s Novo! Some of the belugas are vocalizing on the surface. New groups join the herd; we’re now observing over 75 individuals! Among the bulls present, we also recognize John A. Macdonald.

We’re off the coast of Trois-Pistoles. We make contact with a herd of some thirty individuals, including both adult and young belugas. Novo is identified! In fact, this is only individual that we managed to identify in the course of this contact.

After studying the herd for two hours, we leave. En route, we encounter a harbour seal, a few minke whales… and a horse carcass! Working at sea brings new adventures and surprising discoveries every day!

The team at W. Maxwell Agendas picked the name Novo: «Novo as the beginning of a new relationship between humans and belugas.

For us, Novo is the ambassador, the one who helps to create this link between species that is essential to change our attitude towards nature.»
-Silvia Spampinato and Serge Turgeon, W. Maxwell Agendas