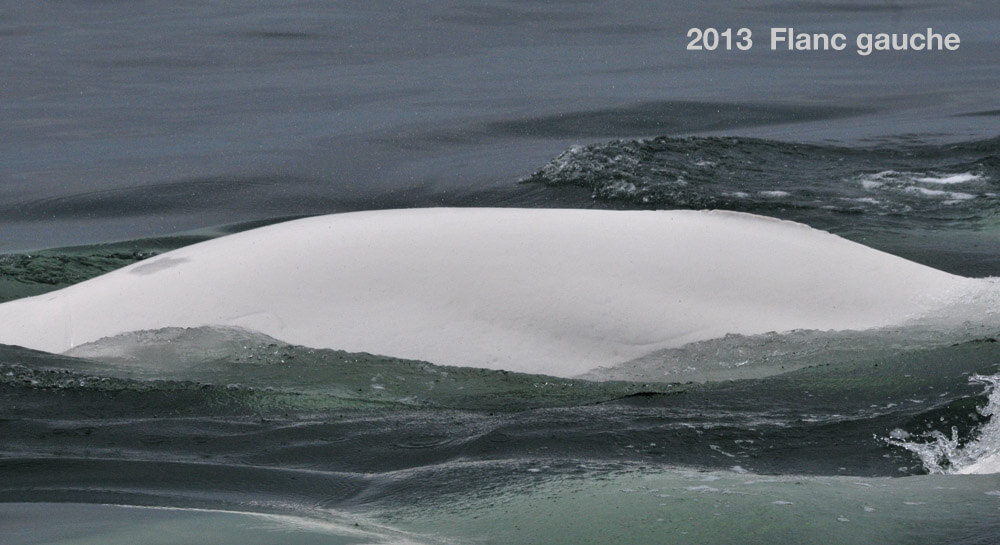 DL1214 can be recognized especially by the gray spot on his upper flank, just behind his head. Relatively unmarked up until 2005, his dorsal crest today shows a multitude of gashes. 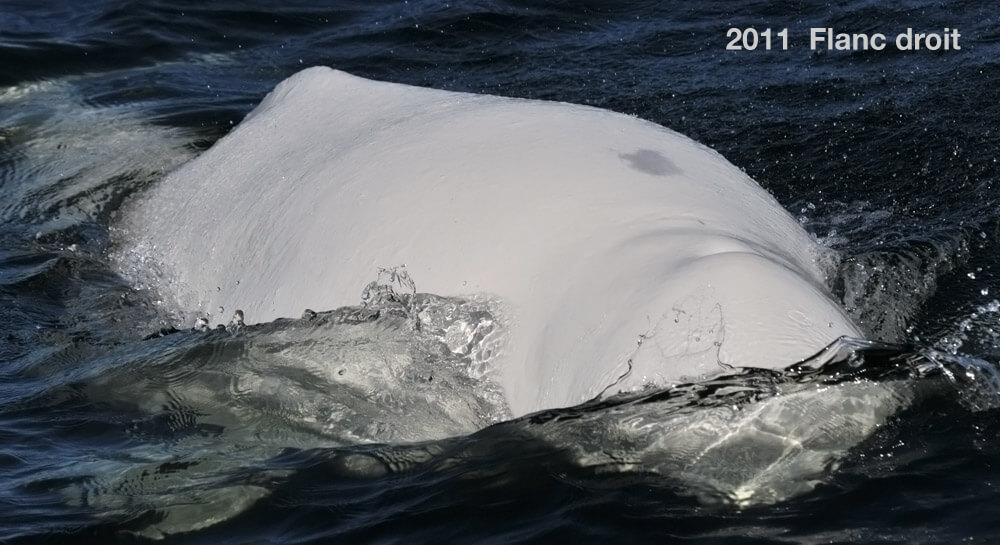 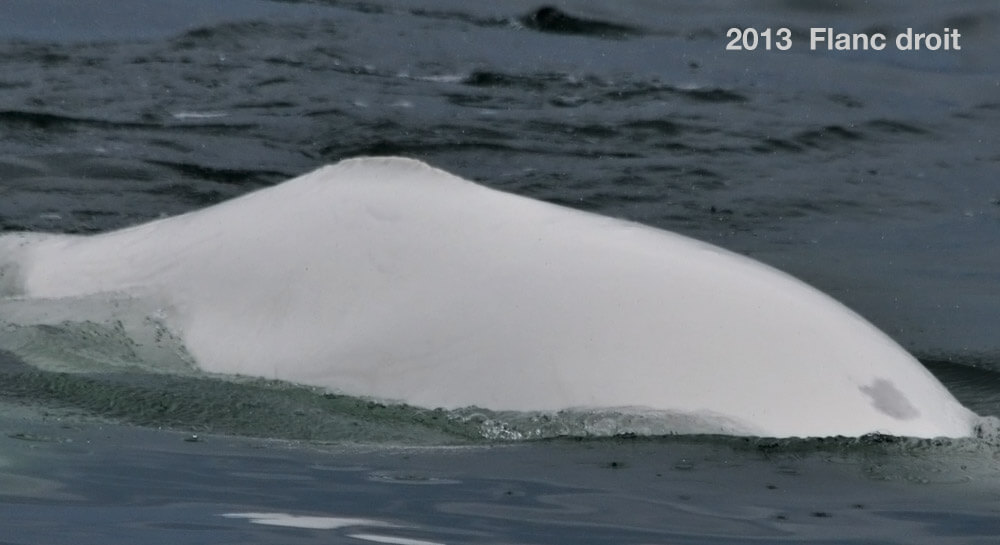 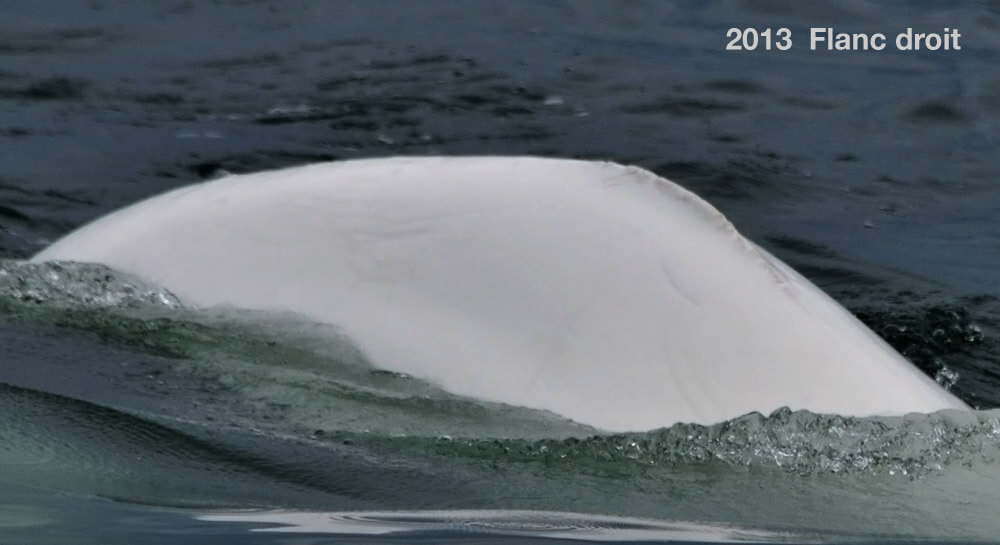 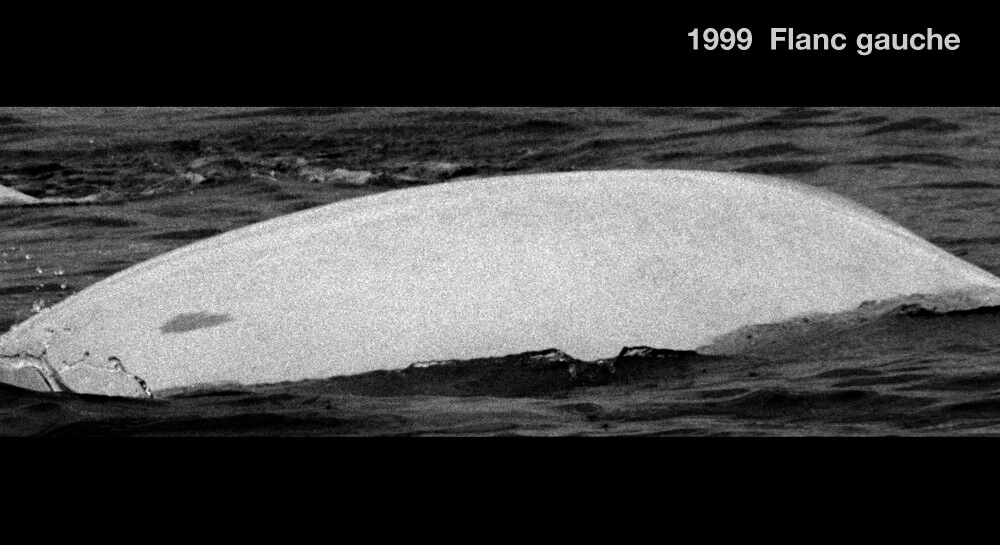 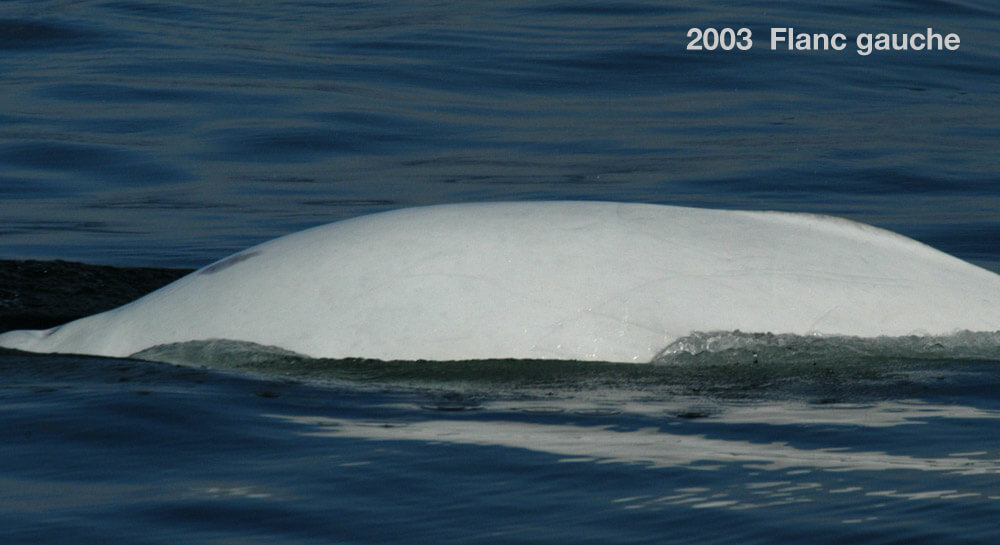 Today, his large size and social associations suggest that DL1214 is a male. Like other adult bulls of the population, he spends most of his time in herds composed essentially of males. He seems to favour the downriver sector of the population’s summer range, namely between Tadoussac and Les Escoumins.

As the years go by, males have a tendency to form stable groups of companions. Three networks of males are known: two of these navigate the Saguenay Fjord and the head of the Laurentian Channel, while the third one, the “Downstream Boys”, also uses the head of the Channel as well as the downriver portion of the Estuary. These associations, established gradually in adulthood, may play a role in belugas’ reproductive lives. DL1214 is not yet known to have any faithful companions, but he is regularly observed with DL0486 and DL0988. None of these three individuals has ever been observed in the Saguenay River, which leads us to believe that they may be members of the “Downstream Boys”.

How DL1214’s story unfolds will teach us volumes on the evolution of belugas’ social lives. By better understanding how belugas live, we will better be able to protect them.

The research season is drawing to a close. We are taking advantage of the last pleasant days of October to continue our beluga photo survey. On board our inflatable research boat, the BpJAM, we head out in search of these white whales. We find a first herd of twenty to thirty belugas that includes white adults and grey juveniles. Some individuals are active on the surface; the herd is split into several smaller groups. We follow one group and photograph the male DL1214. The belugas are scattered and so is our attention: a minke whale repeatedly breaches in close proximity. We are enjoying nature’s spectacle. What a privilege it is to be amongst the whales!

We observe DL1214 in a herd of about 100 individuals, including both adult and young belugas. We’re in the middle of the river in the Lower Estuary. We can see Île aux Basques in the distance, which lies off of Notre-Dame-des-Neiges. The herd comprises mostly white adults, and there are also several groups of young individuals whom we’ve nicknamed the “teenagers”.

Throughout our encounter, we are able to hear a number of vocalization sequences. Hearing beluga vocalizations is not rare but is always impressive. The beluga’s vocal repertoire is vast, comprising whistles, chattering, squeals and grunts, earning them the nickname “canaries of the sea”.

At 3:25 p.m., we are near Île aux Pommes off Trois-Pistoles with DL1214 in a herd of about 60 youngsters divided into seven groups. Belugas are active: some individuals “porpoise”, meaning they swim by pulling their bodies out of the water, and others pull their tails out.

DL1214 is found in a large herd of 80 individuals, all adults, off Les Escoumins. Most of the animals are heading downstream, towards the Gulf of St. Lawrence, while about 20 of them are “logging”, a word meaning that they float like logs on the surface of the water; they are in resting mode.

The Bleuvet takes us off the coast of Les Bergeronnes. In front of us, 150 beluga whales, all adults except one or two large grey beluga whales (so almost adults), are swimming in a single herd. DL1214 swims with six adults, including Nics, DL1996, DL0218, Echo and DL493. The belugas head towards the south shore. In the course of our photos, we realize that the belugas are distancing themselves and that they are becoming difficult to follow. So we let them continue their journey and we continue ours.

We head for the downstream sector where we regularly encounter herds of males. We cross DL1214’s path when he is in a large herd of 120 beluga whales, adult males. The herd is divided into about ten groups of about eight to ten belugas. We also recognize DL1257, a male that seems to favour the downstream sector of the estuary.

The animals are scattered and very active. Some beluga whales stick their heads out at the surface, as if to spy on us, while others stick their tails or pectoral fins out of the water. Some individuals swim in a dynamic and directional manner and suddenly stop, dive and swim back up to the same spot several times. This behaviour is often associated with feeding. The mouth of the Saguenay River, because of its particular oceanographic conditions, is a place rich in prey. In fact, a harbour seal also benefits from the abundance of food!