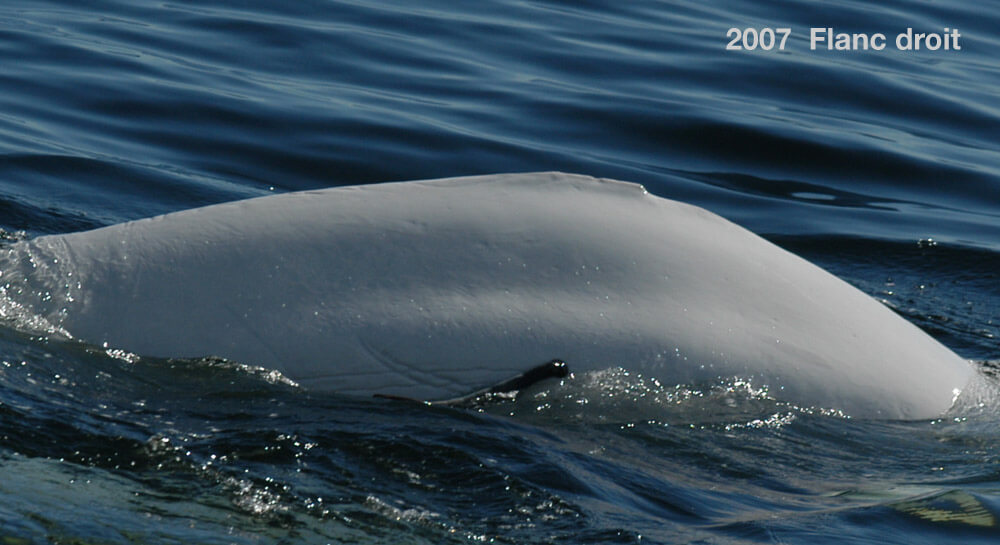 Adopted by The riverside municipalities of the St. Lawrence

Her deep scar shaped at a right angle at the start of her crest is the first thing that catches the eye when observing Cica. She also has a few small gashes in her dorsal crest and a gray spot on her right flank. 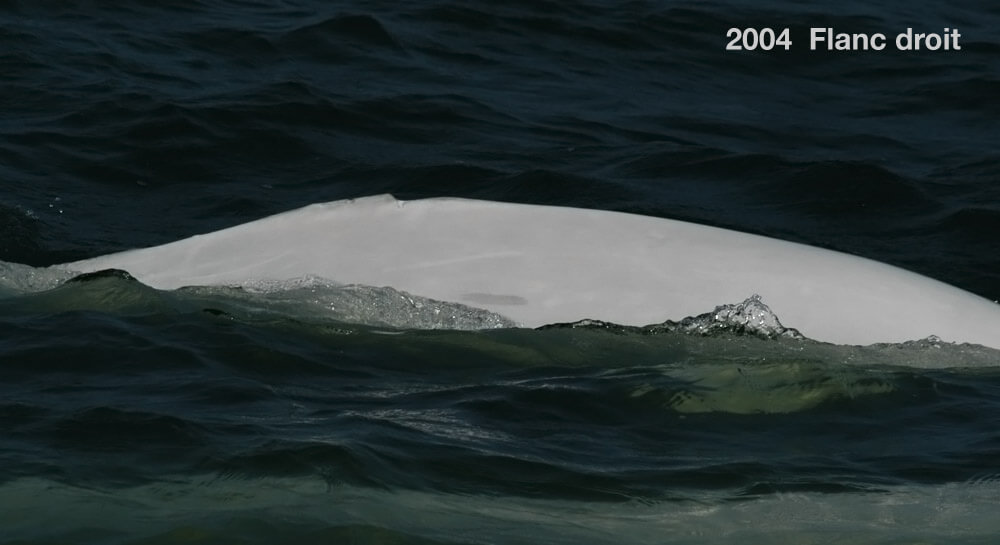 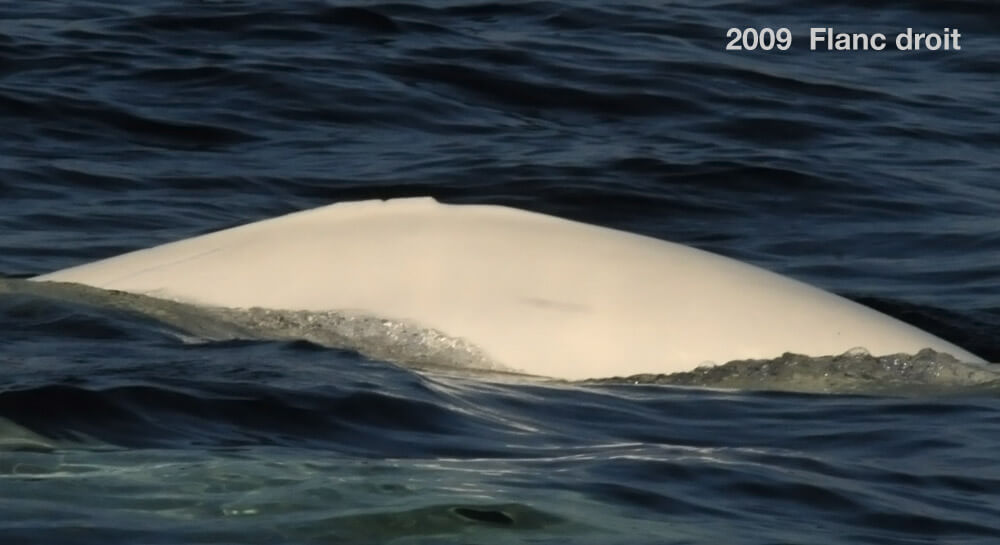 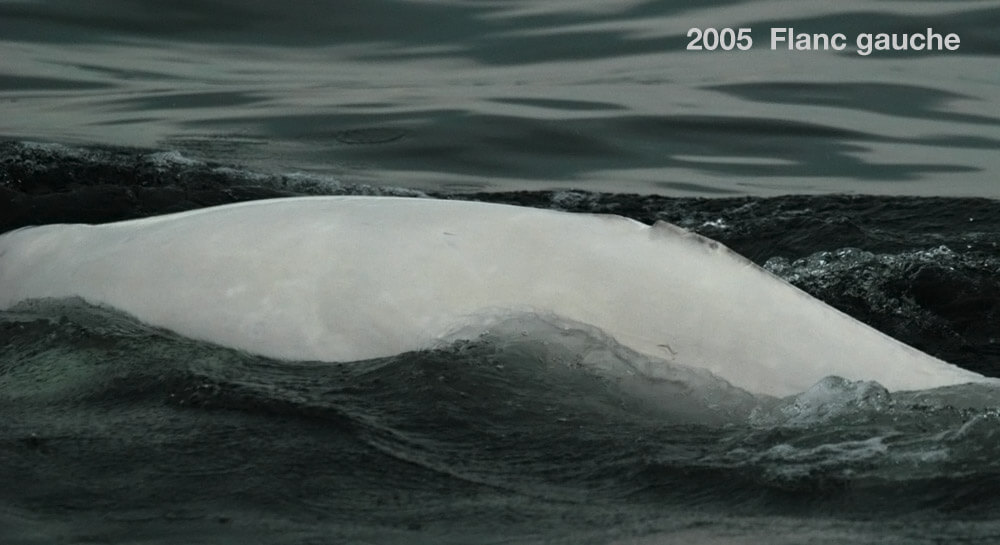 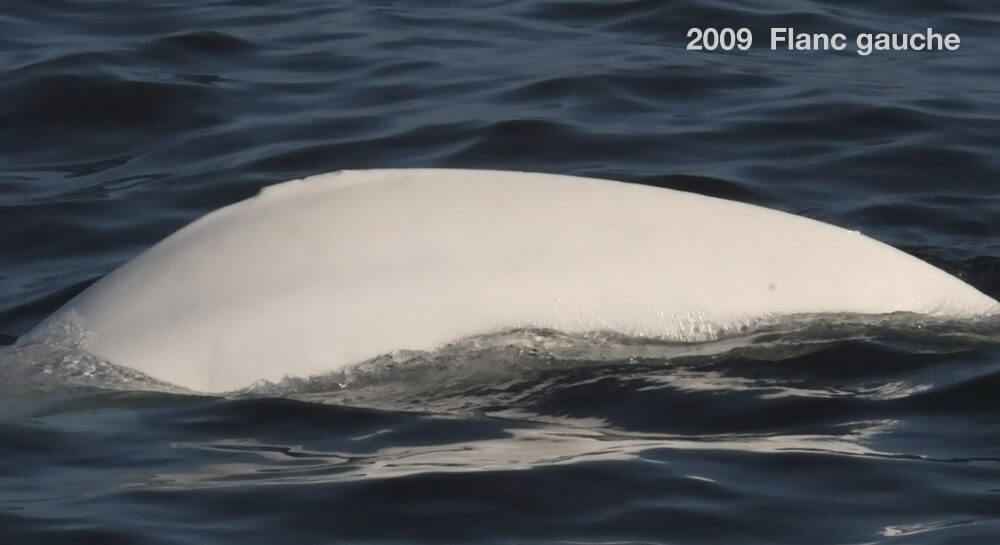 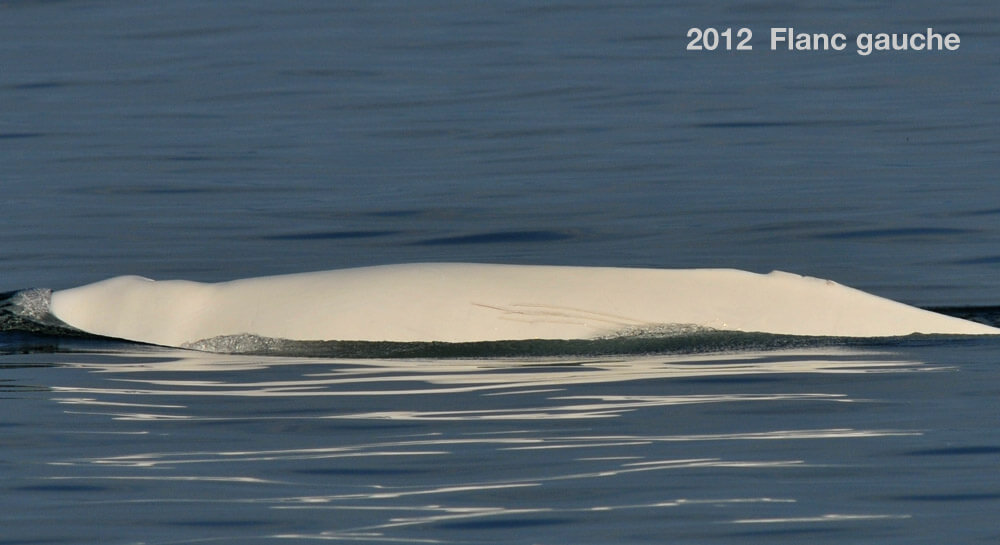 Our first encounter with Cica goes back to 2002. She has been seen quite often. Cica never goes unnoticed. Her deep scar forming a right angle at the start of her crest catches the eye of the observer.

When she was first encountered, Cica was still slightly gray, but already nearly adult in size. She turned completely white around 2005. Belugas fade from gray to white in colour between the ages of 12 and 16. Cica would therefore have been born around 1990.

Her size and regular presence in groups comprising newborns suggest that Cica is a female and that she belongs to the Saguenay community. In summer, females form large communities in which they care for newborns and young. These communities are faithful to traditional territories and exchanges between them are uncommon.

Her companions include Pascolio, Miss Frontenac, and Yogi, who, like her, belong to the Saguenay community. Associations between females of the same community are not generally stable. They may vary depending on the females’ reproductive status and whether or not they are pregnant or accompanied by a calf.

How Cica’s story unfolds will teach us volumes on the evolution of belugas’ social and reproductive lives. By better understanding how belugas live, we will better be able to protect them.

In the Saguenay, we observe a herd of some forty individuals comprising adults and young, including one newborn. Cica is swimming in the company of other known cows Annakpok and Blanche, who are also part of the Saguenay community of females. The entire herd is highly active: tails, melons and pectoral fins can be seen at the water surface. Now that’s action!

The riverside municipalities of the St. Lawrence adopted together Neige, Nics, Bilou, Cica and Solidaire (2014).

Click on the names below to discover texts, drawings and videos composed by children of participating schools on Facebook as part of the Our Beluga’s Name is… contest.

Neige was named by the special education class of the École Saint-Alexandre in Port-Cartier.

Nics was named by the 5th and 6th grade class of the École Élisabeth Turgeon in Rimouski.

Bilou was named by the 3th grade class of the École de Ste-Thérèse-De-L’Enfant-Jésus in Saint-Jérôme.

Cica was named by the 2th grade class of the École de la Ruche in Lévis.

Solidaire was named by the 5th grade of the École Our Lady of Pompei in Montreal.