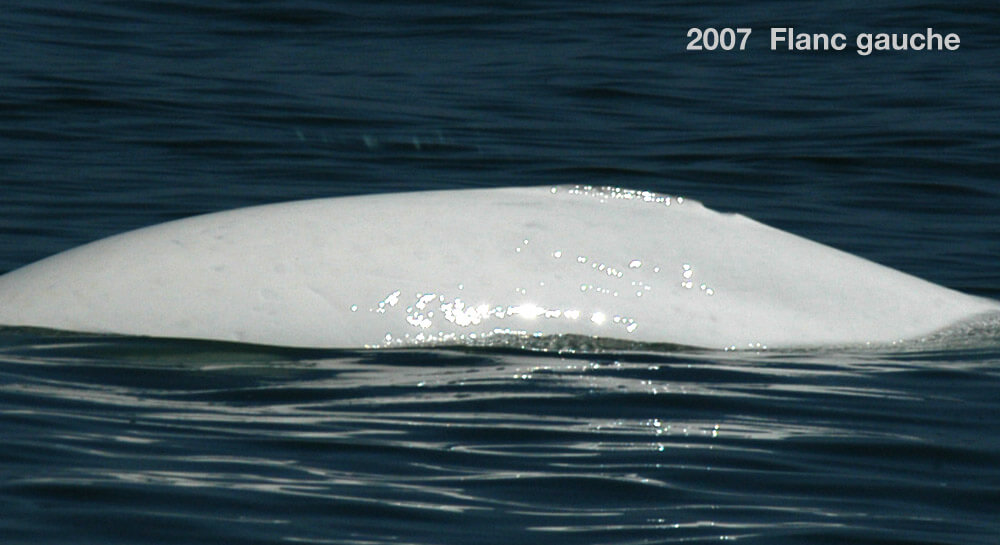 Nomi’s dorsal crest is sufficiently marked to identify her from both flanks, particularly by the deep gash in its posterior part. There is also a grey line on each side below the crest. 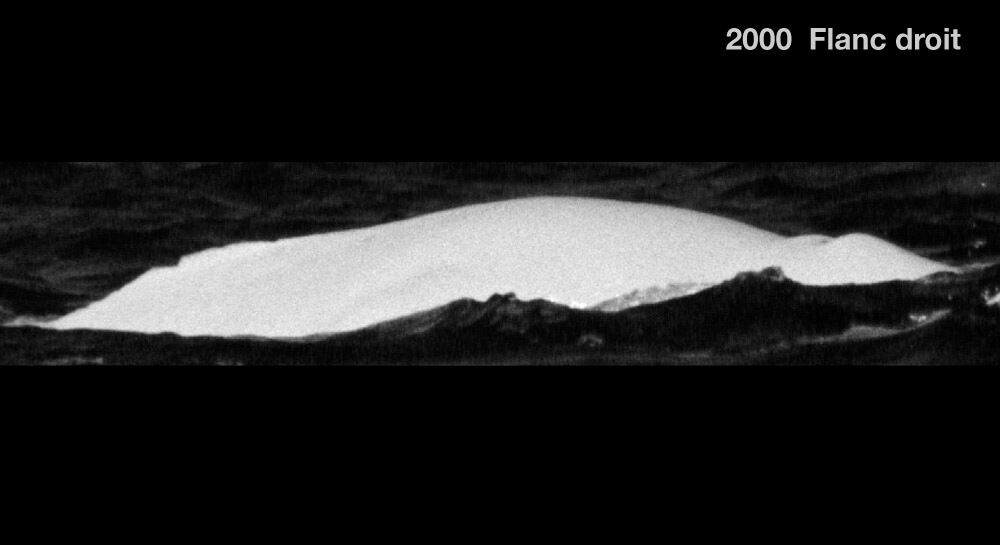 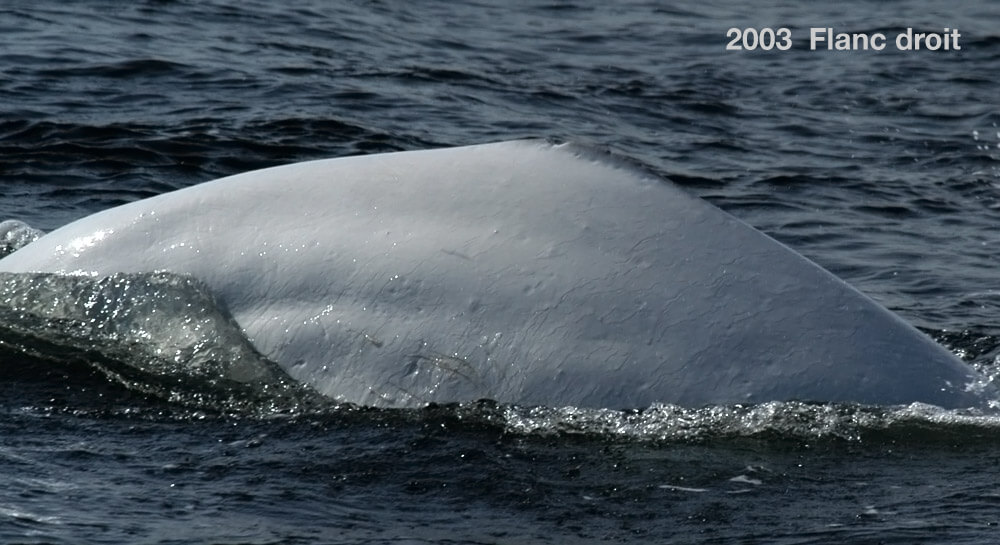 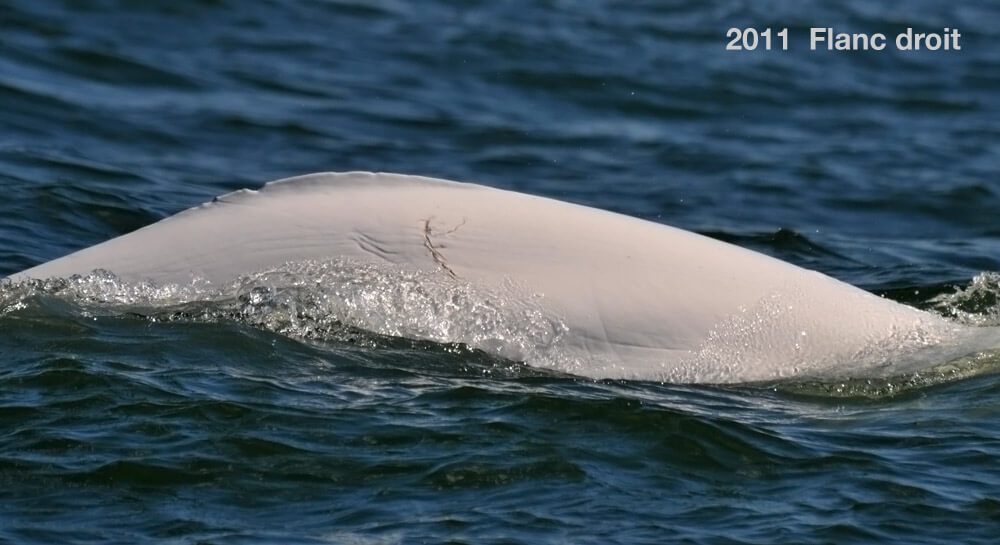 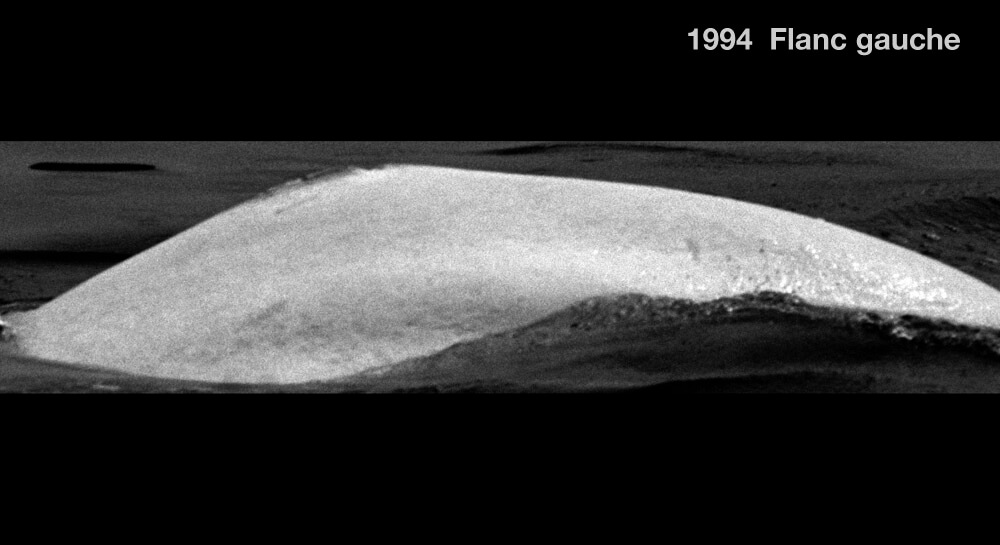 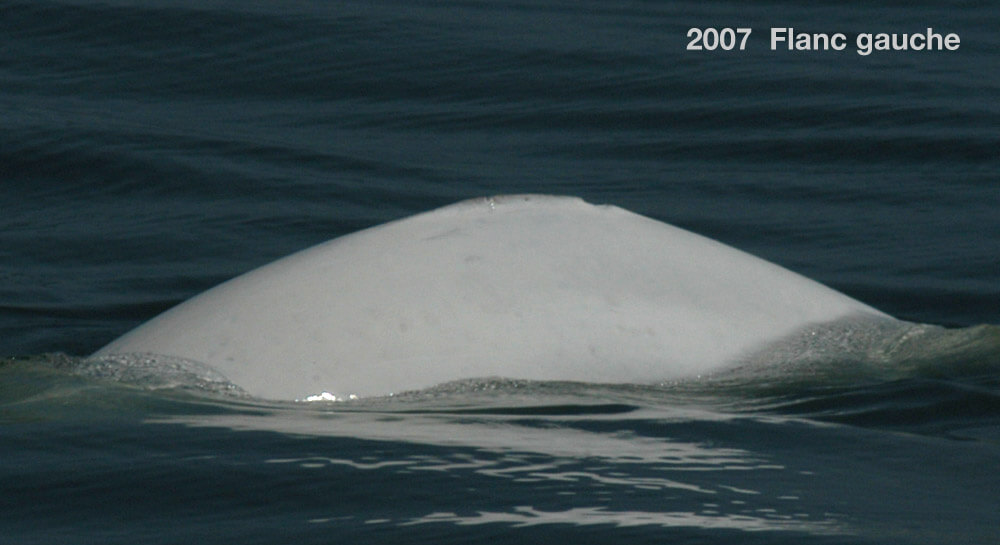 Our first encounter with Nomi goes back to the summer of 1994. She was already white at the time, making her age difficult to estimate. However, as belugas fade from gray to white in colour between the ages of 12 and 16, we can affirm that Nomi would have been born no earlier than the early 1980s.

Her size and associations suggest that Nomi is a female of the Saguenay community. In their summer range, females form large communities in which they tend to newborns and young. These communities are faithful to traditional territories and exchanges between them are uncommon. DNA analysis of a biopsy sample taken from her back in 2000 would confirm her sex: Nomi is indeed a female.

Her companions include Yogi, Élizabeth and DL0169, females of the Saguenay community like herself. Associations between females of the same community are generally not very stable. They may vary depending on the females’ reproductive status and whether or not they are pregnant or accompanied by a calf. Nomi was observed on several occasions accompanied by calves and young belugas. We must await more detailed analysis of such associations before we can confirm which of the aforementioned calves may have been her own.

Autumn is setting in and it is starting to get chilly on board the BpJAM, GREMM’s inflatable research boat. We are navigating through one- to two-foot-high waves, which means a steady hand is needed to be able to take pictures sharp enough to identify our belugas. Near Rivière-du-Loup, we encounter a herd of fifteen to twenty individuals, mostly greys and two calves. Nomi is in the middle of this group. She has a young grey beluga nearby. Is this one of her own offspring that continues to follow her? Is she sharing knowledge with it? In the month of September, we usually take biopsy samples from belugas. We could have determined whether or not the two were related. However, due to COVID-19 protocols, we were unable to have a large enough team on board to be able to take such samples. As a result, we’ll have to wait to crack this mystery!

We’re on our way to the lighthouse at Cap de la Tête-au-Chien aboard the BpJAM, our inflatable research vessel. It’s early afternoon and conditions are favourable, with light wind and good visibility. We spot a small herd of 4 or 5 individuals, take a few photos and then spot another group, this one numbering nearly a dozen animals. Half the belugas still have grey skin, an indication that they are relatively young. Two large females are swimming among them: Bleuoutremer and Nomi. The wind begins to pick up. We photograph a few more belugas. By around 2:30, the waves become more intense. After we’ve had enough of being rocked about in our small boat, we decide to return to our home port of Tadoussac.

Early in the morning we set out to encounter belugas. At the mouth of the Saguenay, we spot a herd of a dozen or so individuals composed of adults and young. After an hour of observations and photo-ID work, we lose sight of all the individuals. The belugas dive and vanish below the surface, making our job all the more challenging. Seeing their white backs in the distance, we decide to go ply the waters off Île Rouge. Great choice! We manage to take several photos of a white adult with a calf. Back at the research station, we scan through the photos taken and recognize Nomi! However, at the present time we cannot confirm whether or not the calf is hers.