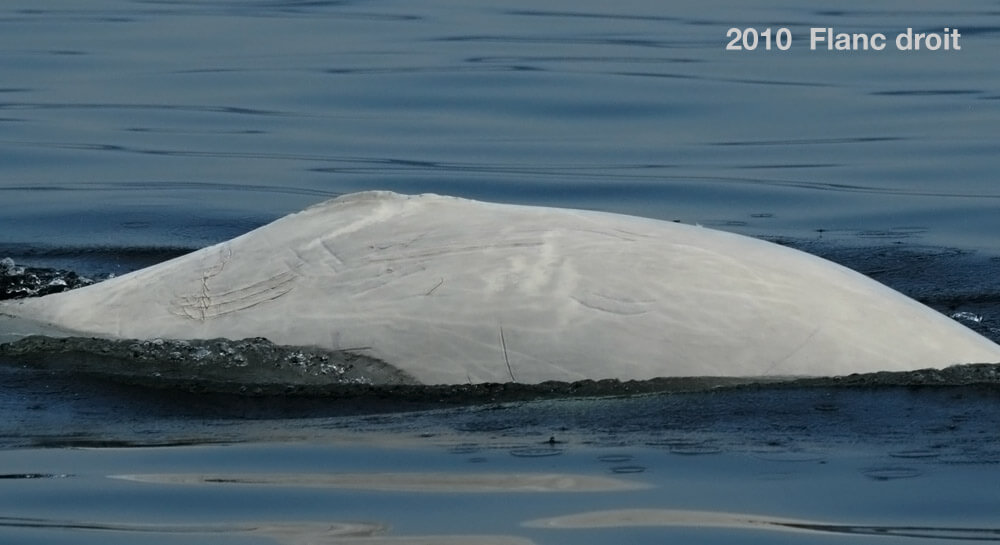 There are several ways to identify JP. He has a series of blemishes, similar to brush strokes, on his right flank, in front, in the middle and behind his dorsal crest. He also sports a large, deep notch in his crest. 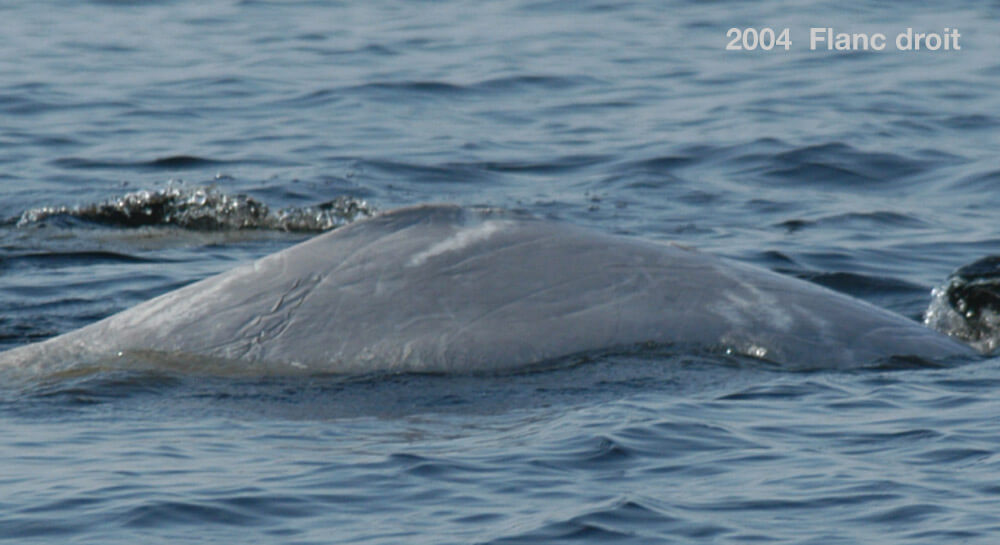 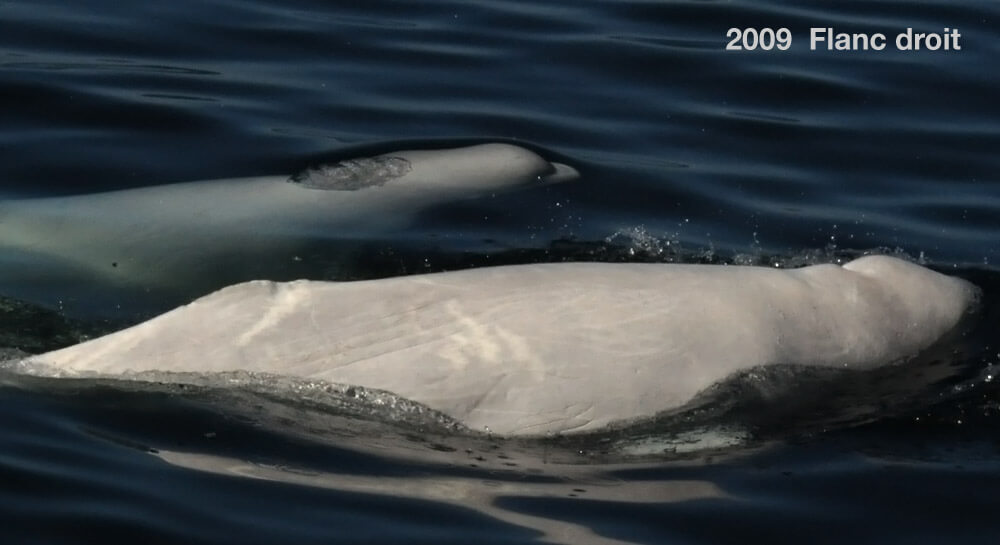 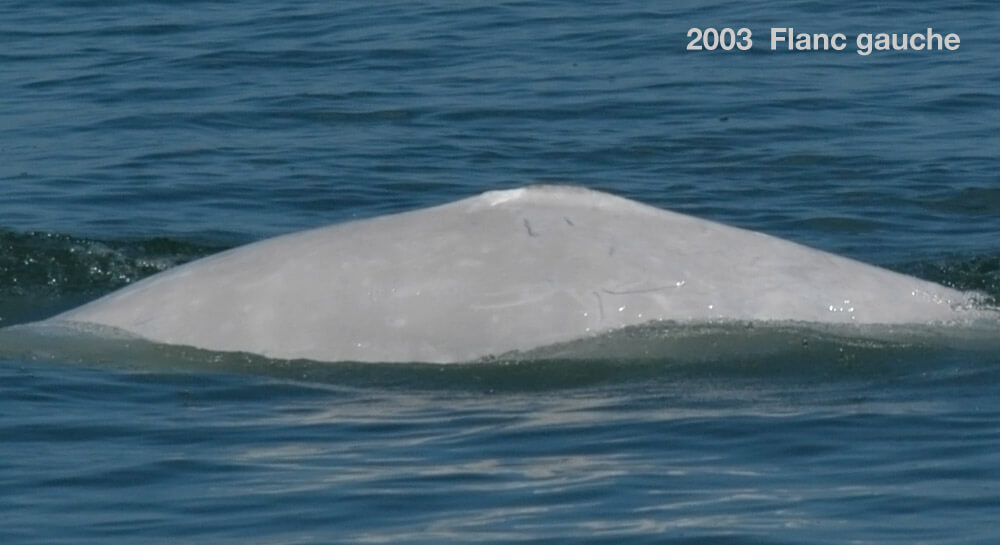 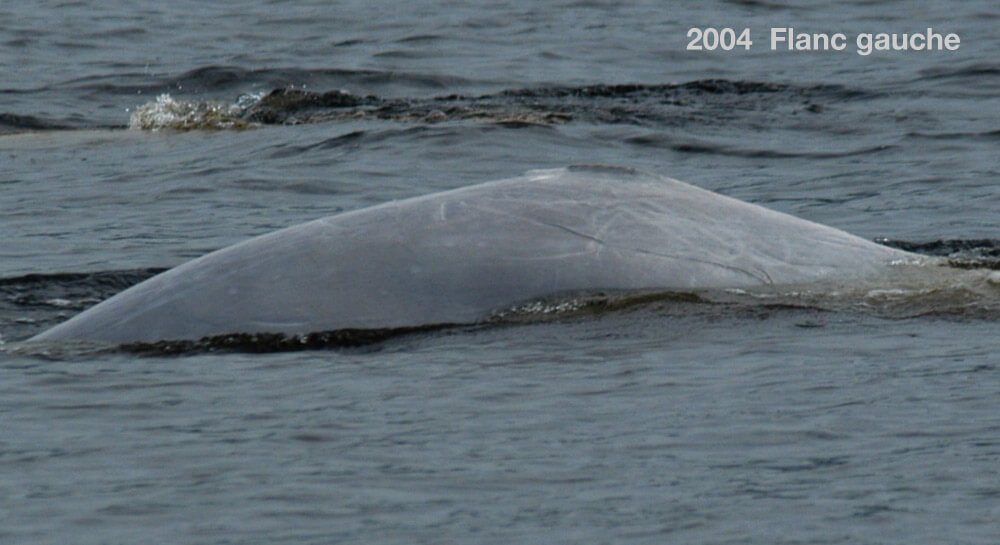 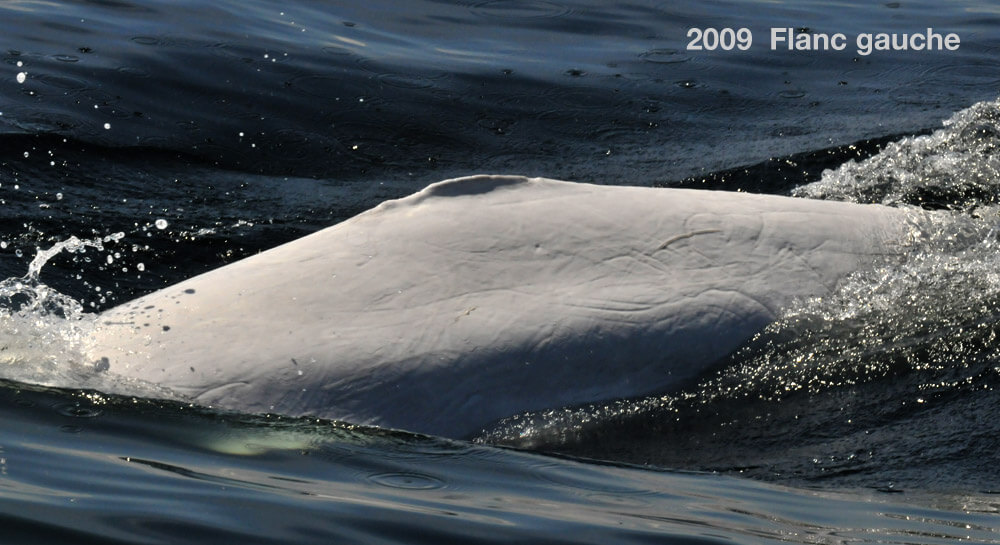 Our first encounter with JP dates back to the summer of 2003 when he was swimming in a herd of around 50 animals, mostly young whales. At the time he was a very young, dark grey, beluga whale. Re-sighted in 2014, he was light grey in colour, almost white. The colour change in beluga whales—their transition from grey to white—takes place between the ages of 12 to 16. Thus, JP was born around 1999.

Easily recognizable by the deep notch in his dorsal crest, JP has been observed every year since 2003, with the exception of 2012 and 2013. His story led us to believe that he was a male beluga whale. A biopsy taken in 2007 confirmed this hypothesis. A biopsy is a small piece of skin and blubber extracted using a crossbow that propels a dart-tipped bolt.

JP is regularly observed in large herds of young males in the Saguenay Fjord and at its mouth. As males get older they tend to form stable groups of companions. These associations become progressively established and may play a role in their reproductive lives. We still do not know any of JP’s faithful companions. However, he has been seen several times with DL1881, another young, adult male.

The next chapter in JP’s story will teach us a lot about the evolution of the social lives of beluga whales. Learning how beluga whales live will enable us to better protect them.

Off the coast of Tadoussac, we come across a herd of belugas numbering 40 to 50 individuals. They are mostly white, with a few young greys mixed in. Counting the belugas is not so straightforward, as the sun is creating a distracting glare on the water. Within the herd, we recognize JP, which is one of the few belugas that we can recognize on the water thanks to his scars and spots that resemble brush strokes. We hear vocalizations on the surface, in addition to seeing fins splitting the waves, tails slapping, and bodies jostling. Not too far away, we spot a minke whale feeding. Are the belugas and the minke whale sharing the same feast? Unfortunately, our documentation work is interrupted by a problem with our boat’s engine. We return to port to take a closer look.

The summer of 2016 – our 32nd season at sea with the belugas – was once again rich in encounters and surprises. Good news: after a brief one-year absence, we saw JP again this summer. Unlike all of our previous encounters where he was in herds of juvenile males (the “teenagers”), JP was seen for the first time in a herd of adult males including a few juveniles. Perhaps he is about to choose a network in which he will develop long-term associations with other males?

August 30, 2016: we take advantage of the gorgeous weather to visit the downstream sector, where we regularly come into contact with herds of males. We cross paths with JP off Îles aux Basques. He’s in a herd of some sixty individuals, including adults and a few gray individuals. The herd is split into about ten groups of six at fifteen belugas. We also recognize males DL0269, Douxi and DL0370.

The animals are scattered and highly active. Some belugas poke their heads above the surface as if to spy on us, others are spitting out water. They’re swimming dynamically and in one distinct direction when they suddenly stop, dive and resurface several times at the same spot. They’re probably feeding. The encounter with JP is also very rich in terms of acoustics. We hear all kinds of vocalizations: door squeaks, whistles and much more. Belugas are aptly nicknamed “canaries of the sea”.

JP was observed in a herd of approximately 60 beluga whales at the mouth of the Saguenay. The herd was composed of white adults and a few young adults. JP is still light grey in colour and swims with other very active light grey beluga whales.

Early this morning, visibility is excellent. We’re sailing near Île aux Fraises, off the coast of Kamouraska. JP is recognized in a herd of fifteen or so individuals, consisting mostly of young juveniles that we’ve nicknamed the “teenagers”. Within the herd we are able to make out several small gray heads, which are seals. After an hour of observing, we attempt a biopsy. Bull’s eye! We’ll be able to analyze the DNA of one of JP’s companions and piece together a little more of its story.

It’s a foggy day. Visibility is still decent enough that we can head offshore in search of belugas aboard the Bleuvet. It’s in the sector off Les Bergeronnes that we cross paths with about a hundred individuals. The herd contains several sizable grays, which we might call “teenagers”. The belugas are a lively bunch, and we can even hear vocalizations and whistles. Within the herd, we recognize JP along with four other large gray belugas. The fog thickens, so much that we completely lose sight of the animals. Be that as it may, we can still hear their breaths and calls. Unfortunately, we have to call it a day and return to the marina.