Are there fewer whales in the St. Lawrence this season?

As of August 4, 2022, just 7 fin whales have been observed this season in the Saguenay-St. Lawrence Marine Park. © GREMM

On both shores of the St. Lawrence, many folks are concerned about the paucity of whales observed in the river in recent weeks. Although it is still too early to draw any conclusions, the Whales Online team consulted long-time observers and scientists to shed some light on the situation.

In the Gaspé peninsula, around 20 humpbacks and a few fin whales marked the start of the season, but since then sightings have somewhat petered out. While it is quite normal to see fewer whales in July than in June in this region, the complete absence of blue whales and the scarcity of fin whales are a little more unusual. In the Mingan sector, only a handful of humpback and fin whales have been observed since the start of the season. The minke whales that frequent offshore waters also seem to be fewer in number.

For several years now, the Mingan Island Cetacean Study (MICS) has noted a decline in the number of large rorquals frequenting the Jacques Cartier Strait. Conversely, in the Saguenay-St. Lawrence Marine Park, the number of humpback and fin whales tallied each season has been exceptional since 2018, especially last year. This may partially explain why the number of whales seen this summer may appear low. According to Fisheries and Oceans Canada biologist Véronique Lesage, the number of individuals in the estuary this year is not particularly low compared to the early 2010s. Indeed, the 7 fin whales identified in the estuary to date is similar to the totals for the seasons between 2014 and 2017. As for the number of humpbacks observed this year (37), this figure already surpasses all other years except 2021.

Tim Perrero, who leads GREMM’s large rorqual survey, agrees, however, that whales are behaving differently this year: “Their stays in the sector are extremely short compared to usual, with most of them staying here only a week, or even just a couple of days.” 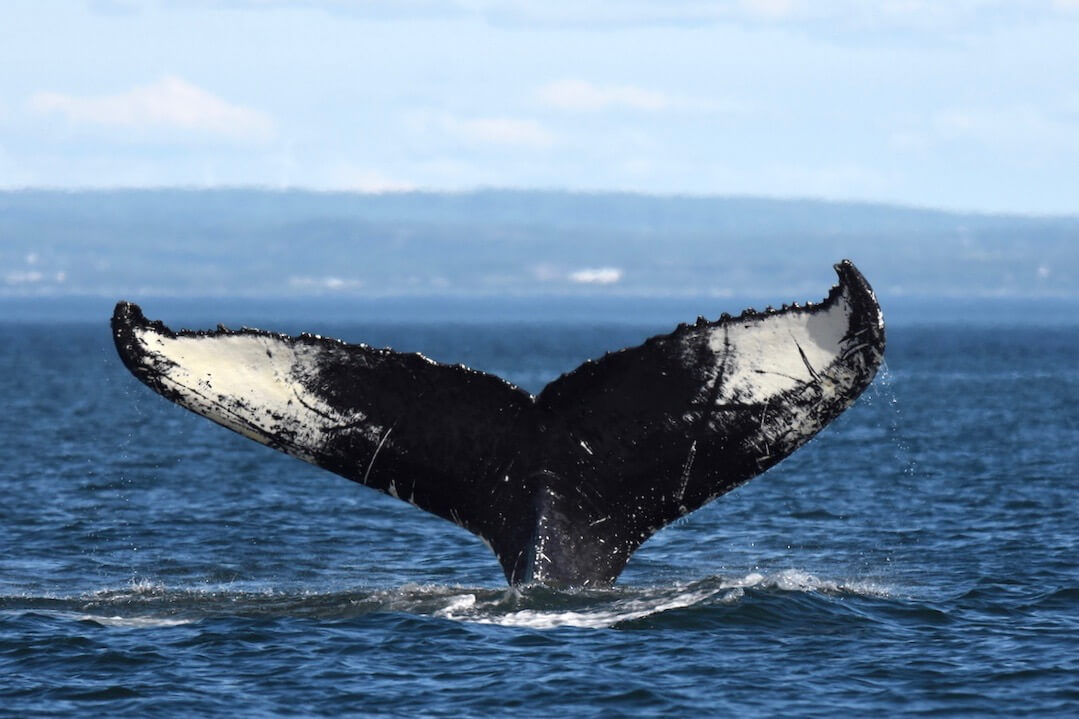 Several humpback whales that regularly visit the estuary, such as Tic Tac Toe, have been spotted this summer, but they don't seem to be staying in the area very long. © GREMM

Such is the case of Tic Tac Toe, a humpback that has made several brief visits to the area this season, rather than its usual months-long stays. As for fin whales, some individuals considered to be estuary “regulars” have not yet been seen this year. These include Orion (Bp017), Caiman (Bp034), Piton (Bp942), and Kaskan (Bp918). These individuals normally spend one-third to half of the season in the area and have only been missed once in the last 10 years. For Tim Perrero, “Time spent in the area is important to take into account, and can tell us a lot about what is going on in the ecosystem.” This parameter adds an important nuance when interpreting the number of individuals tallied. However, it is important to remember that the season is not yet over!

The adjacent table presents the total number of fin and humpback whales photo-identified between mid-June and mid-December in the Saguenay-St. Lawrence Marine Park sector between 2014 and 2022. Fin whales were photo-identified by images of their right flank, while humpbacks were identified using photos of the underside of their caudal fin. The year 2021 contains only preliminary data, as observations made by GREMM collaborators are still being processed, while 2022 includes individuals identified by GREMM and its collaborators as of August 4, 2022. 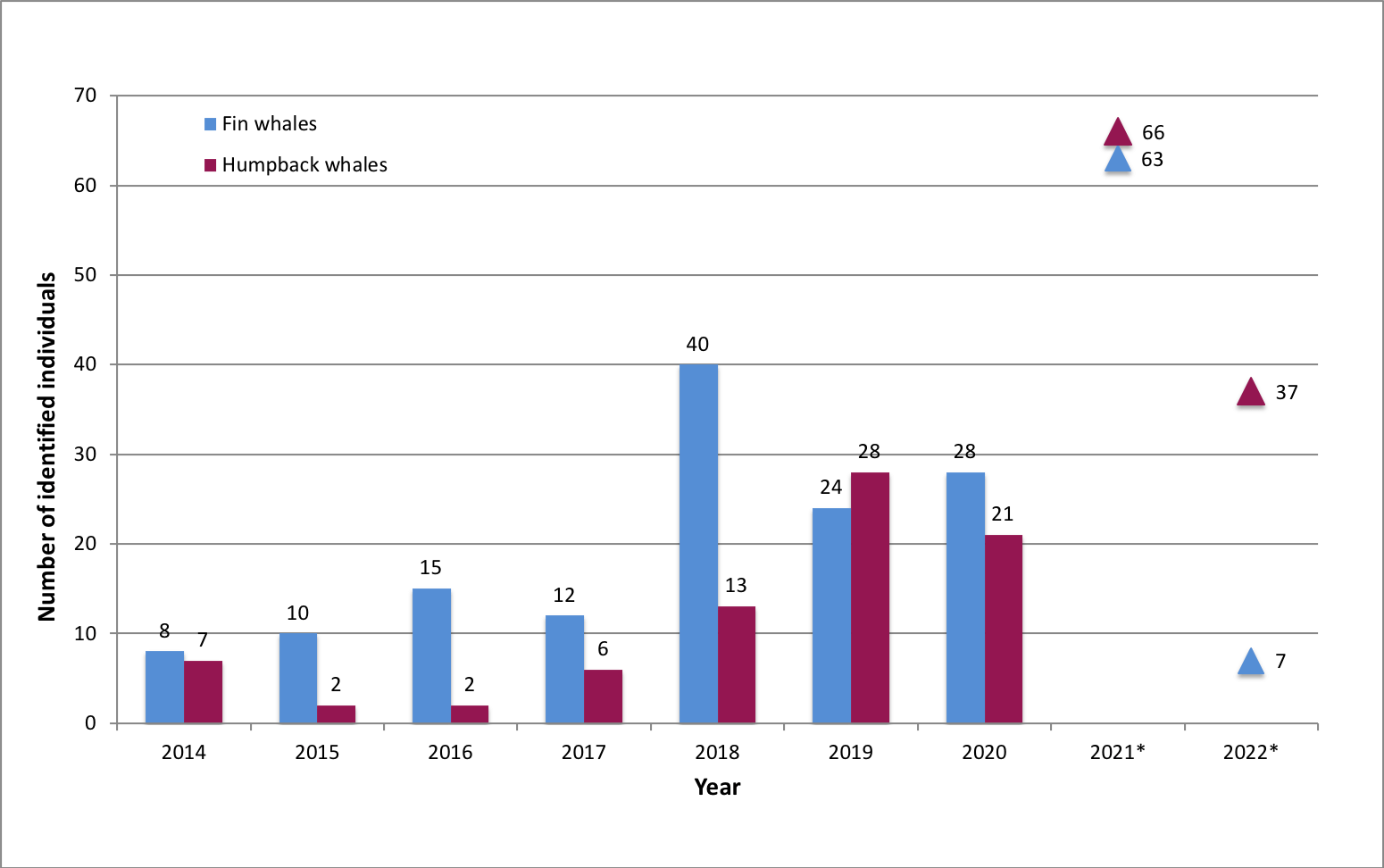 Data from Parks Canada ecologist Samuel Turgeon point in the same direction: monitoring of whale-watching activities in the Marine Park suggests that the cetaceans are lingering less and exploring more. Analysis of AIS data from cruise ships shows that passengers are combing the Marine Park more than in previous years and spending less time at traditional locations to observe large rorquals, such as Cap Granite and the canyon between Pointe à la Cariole and Île Rouge; meanwhile, the mouth of the Saguenay is seeing heavier tourist traffic, supposedly to observe foraging minke whales. A Parks Canada study on the monitoring of offshore whale-watching activities between 1994 and 2017 (in French) indicates that the presence of cetaceans in the Marine Park has been more variable since 2012.

What influences the presence of whales in the St. Lawrence?

Whales visit the St. Lawrence mainly to feed. The first hypothesis to explore would therefore be a change in prey abundance and distribution. Within the Marine Park, the Parks Canada team conducts hydroacoustic surveys to detect the presence of prey. According to Samuel Turgeon, their preliminary data seem to indicate that unlike previous years for which data are available, to date there have been very few sand lance (a fish that whales prey upon) in the area.

As for krill, the abundance of this prey of choice for blue whales has declined in recent years. The availability of the fin whale’s favourite food – arctic krill – is believed to be particularly concerning. According to a study conducted by Jory Cabrol and his colleagues, the abundance of arctic krill is declining in the St. Lawrence, while that of northern krill is trending upward. 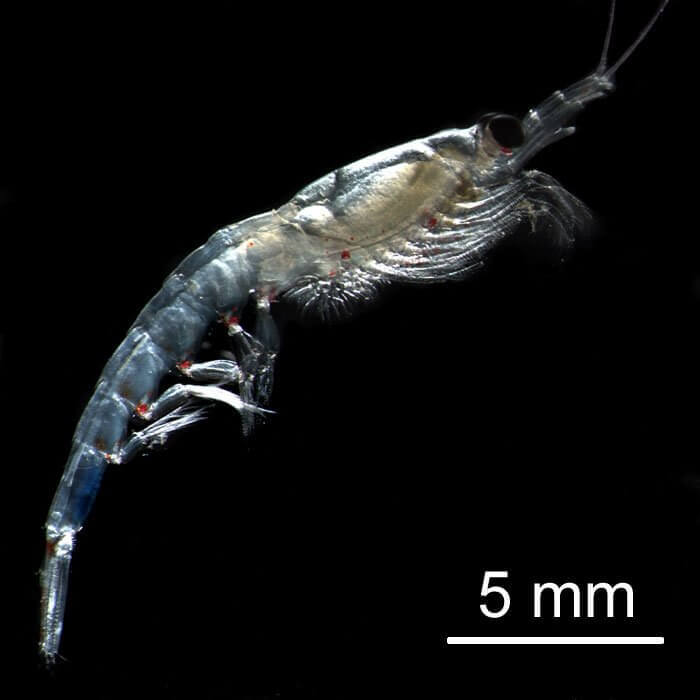 Changes in prey abundance could be due to normal cyclical variation, or to disturbances in the ecosystem, such as rising water temperatures and reduced ice cover. Lower levels of dissolved oxygen (article in French) in the water may also be having an impact. It was in the depths of the Lower Estuary, between Tadoussac and Pointe-des-Monts, that the first alarming data were recorded in 2003. Since then, oxygen concentrations have fallen below the severe hypoxia threshold and the affected area now extends all the way to the Gulf. A number of fish species are being impacted, as is the balance of benthic communities.

Although the number of whales seems to have fluctuated over the past few years, it is still difficult to pinpoint the causes of these changes. Studies with longer data sets and that incorporate multiple aspects of the ecosystem are needed to gain a better grasp of the situation. We must also remember that the month of August has just begun and that there are still several weeks to go in the season!