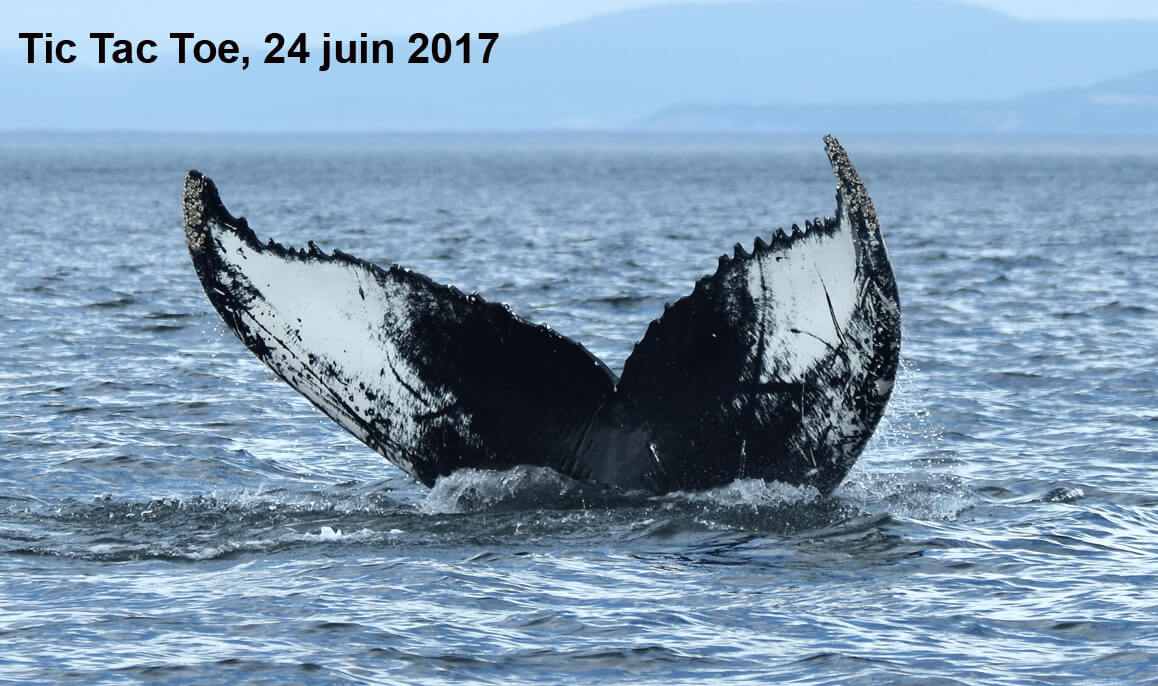 Tic Tac Toe owes its name to the large “X” visible on the right lobe of her tail. The pronounced serration of the tail and its black and white colouring pattern make her relatively easy to identify. Tic Tac Toe also has a dorsal fin leaning to the left side.

This female humpback whale has markings on the base of her tail that strongly suggest entanglement marks.

Thanks to her distinctive markings, dynamic character and her numerous visits, Tic Tac Toe has become one of the more famous, if not the most famous whale in the St. Lawrence!

Born in the Caribbean in the winter of 1996-1997, she migrated north with her mother Quartz the following summer. In the fall of 1997, the mother-calf pair was spotted by researchers from the Mingan Island Cetacean Study (MICS).

But the storied history that unites Tic Tac Toe with the Group for Research and Education on Marine Mammals (GREMM) begins in the summer of 1999 when she ventures up the Estuary, this time alone and fully weaned. At the time, this visit was noteworthy: humpbacks were frequently observed in the Gulf of St. Lawrence, the Mingan region, Basse-Côte-Nord or Gaspésie, but almost never in the Estuary. GREMM’s team would take the opportunity to photograph Tic Tac Toe’s tail, on which one can make out the giant X that earned this whale her name. Based on this initial identification, she would be recognized many times over the years.

Following this inaugural visit, she has returned almost every year. Fortunately, she is no longer alone: ​​the recovery of the North Atlantic humpback whale population seems to mean that observations of the species in the Estuary are trending upward. Those sightings fail to cast a shadow on Tic Tac Toe, however, who knows how to stand out with her acrobatics, breaches and grunts. In 2002, we even see her give a flick of her tail to another humpback swimming at her side!

Over the years, Tic Tac Toe has remained faithful to the Estuary. The feisty young humpback gradually grows calmer over time. Observers still sometimes testify to her amazing aerial prowess, but the whale is now attracting attention for another reason: her calves.

In 2007, Tic Tac Toe becomes the first humpback whale ever to be observed escorting a calf into the Estuary: Aramis. The bond that unites a calf and its mother can last up to two years, making it one of the longest-lasting ties amongst baleen whales. Likewise, for several consecutive summers, we observe the mother-daughter duo swimming side by side in the St. Lawrence. They even breach and perform pirouettes together! Tic Tac Toe then gives birth to a second calf (H797) in 2012, and another (H855) in 2017. Each birth is a long process: first a gestation period of eleven to twelve months, followed by five to ten months of nursing. This explains the long intervals between births for humpback whales like Tic Tac Toe.

In March 2020, researchers from the Turks and Caicos Islands spot Tic Tac Toe’s daughter Aramis accompanied by her very first calf. Tic Tac Toe thus becomes a grandmother… at the venerable age of 23! But that doesn’t mean that she couldn’t still give birth again herself. Indeed, during the summer of 2020, Tic Tac Toe is observed with a much smaller individual. Is this her fourth calf? If recurrent observations are made, we may be able to confirm this theory.

Will we witness a family reunion in 2020? Stay tuned!

Tic Tac Toe is the star of the marine park, and not for nothing. She has been a loyal visitor to the estuary for 20 years, and was the first to bring a calf with her in 2007. She is often the first to arrive each season. This year, she surprised us again by appearing with a calf, which could be her second one in two years.

Our researchers confirm that the dorsal fin of this little whale does not match that of the calf that followed her last year. Could Tic Tac Toe have a new baby? Knowing that a humpback whale’s gestation period lasts eleven to twelve months and that the nursing period extends over five to ten additional months, Tic Tac Toe was both pregnant and nursing last summer. A remarkable feat that requires impressive energy expenditure, but is not impossible. In a study carried out in the Gulf of Maine, less than 2% of female humpback whales were found to be pregnant at the same time.

Sometimes a small individual is mistaken for a large baby. It is also possible, although never documented in this species, that Tic Tac Toe is taking care of a calf that is not hers. Only the observation of nursing would erase all our doubts. For lack of anything better, the researchers are waiting for five observations of the two individuals together to confidently (and astonishingly) affirm that Tic Tac Toe is a mother for the fifth time!

No need to introduce Tic Tac Toe anymore: her X-shaped scar and youthful acrobatics have contributed to her reputation among researchers and observers. In 1999, she was one of the rare humpback whales to swim up the St. Lawrence Estuary. Since then, she has returned almost every year. Thanks to the recovery of the North Atlantic humpback whale population, Tic Tac Toe is no longer swimming alone in the Estuary!

Since reaching sexual maturity around the age of five, Tic Tac Toe has given birth to three more St. Lawrence “regulars”: H797, H855 and Aramis. In 2020, she was spotted with a whale calf at her side. For the moment, this observation alone does not confirm her parenthood [a couple of months later, we can now definitely confirm motherhood].

For humpback whales, each birth is a long process: a gestation period of eleven to twelve months, followed by a nursing period of five to ten months. The attachment that unites the calf to the mother can last up to two years, one of the longest bonds among mysticetes. For example, the imposing Tic Tac Toe has often been seen in the company of his daughter Aramis. Aramis is said to have given birth to a baby this winter in the Caribbean, making Tic Tac Toe a grandmother… at 23 years old! Perhaps we will be able to see the two mother and calf pairs in the estuary this summer?

For this first issue, who could be better than Tic Tac Toe, an “old” acquaintance of captains and naturalists of the Marine Park, the Gaspé and the Mingan Islands for over 15 years! Here she is, back in one of her favourite feeding areas: the head of the Laurentian Channel. Her signature: a clearly visible cross on the right lobe of her tail.

Where is she coming from? Possibly from a long migration of about 7,000 km. Humpbacks of the North Atlantic mate and calve in the warm, shallow waters of the Caribbean and Cape Verde, an island nation off of West Africa. Their faithfulness to their migration routes, winter breeding grounds and summer feeding grounds makes it easy to monitor these whales worldwide. The humpback “courtship season” is the most studied of all whales.

But before mating takes place properly speaking, competition between males in the form of aggressive battles takes place. They also sing to attract females, establish a hierarchy or a certain degree of cooperation. Eleven months later, a calf is born. It drinks his mother’s fat-rich milk, about 43 litres a day, and grows bigger every day (3 cm/day). It never strays more than a body-length away from its mother. The duo is sometimes escorted by a male.

The young humpback will be weaned around the age of 10 months. However, life with its mother will not end there. It will remain with her for a year, maybe two, to acquire basic hunting skills and learn other elements essential to its survival. Indeed, this maternal care is the longest of any of the baleen whales. It will also discover the long journey to be made to summer grounds such as the St. Lawrence.

Tic Tac Toe has made this long journey at least twice accompanied by her offspring: in 2007 with the female named Aramis – seen every year since 2007! – and with the female H797 in 2012. Might she have given birth since then? Will we see her again with a calf? A young individual was seen near her this week. However, there is no indication at this time that it is one of her own. To be continued!

The first of the great cetaceans to arrive this season and oh-so restless! She was observed on May 3 between Tadoussac and Les Bergeronnes during the GREMM research team’s first trips out to sea, then on May 12 in the Gaspé by a member of the team (also by the MICS team) and again in the Marine Park on May 28.

Of the two calves that were seen accompanying this female, now 16.5 years old (born in the winter of 1997-1998 in Caribbean waters), one was observed just once, in 2012; since then, no trace of it in 2013 or 2014 in the Estuary, nor in the Gulf according to MICS, which oversees the St. Lawrence humpback whale catalogue.

In October researchers published satellite tracking of the migration of 22 North Atlantic humpbacks that departed the Caribbean at the end of winter. To reach their summer quarters where they feed, some whales headed toward the East Coast of the United States en route to Canada, while others travelled 7000 km to Iceland and Norway. They swim at an average speed of 4.3 km/h, compared to 1.7 km/h in their winter reproduction grounds. Females accompanied by a calf swim more slowly than solitary females.

After a long winter

Whether you’re a migratory rorqual or a human being living according to the seasons, it’s always a delight to return to one’s summer stomping grounds. Each and all are hard at it to feed, to observe, to dream, to understand. To better understand the beauty of the St. Lawrence Lower Estuary, the Saguenay-St. Lawrence Marine Park, its finned inhabitants and visitors. To better understand these mammals in order to better protect them, which, like the habitats they depend on, are fragile.