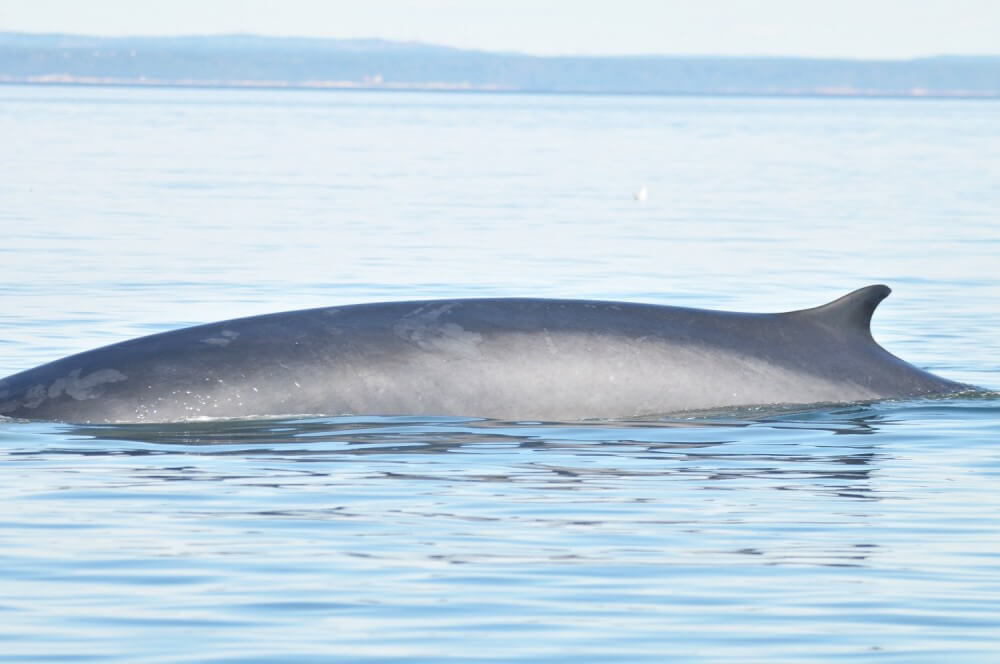 Orion (Bp017) has a new mark this year that distinguishes him quite quickly from other fin whales present in the Marine Park: on his dorsal fin, a relatively deep, crescent-shaped notch. Orion is also recognizable by its dorsal fin, the tip of which is shaped like a truncated letter “V”. His subtle marks make this individual a rather discreet visitor, which means that he may have been seen more often than was officially noted. With his new marking, Orion will be easier to identify. Orion is a male fin whale that has been known since 1988. Its sex was determined in 2006 through a biopsy. He owes his moniker to the marks – now harder to discern – that resemble the constellation of the same name.

In 2013 he was tracked using radio-telemetry. With the first tag, he was tracked for four hours while he fed in the waters around Buoy K54. Researchers were able to tally 32 dives, including one down to a depth of 109 m. In one dive that lasted 11 minutes, Orion took 9 gulps. The record depth recorded by a fin whale is 230 m.

Last week, we were able to observe several spouts offshore, with columns over 5 m high. Four fin whales were feeding. Although fin whales are considered to be rather solitary, rather impressive groups are sometimes formed in the species’ highly productive feeding grounds in the Arctic. Some observers still recall the dozens of fin whales gathered in the St. Lawrence Estuary, feeding by coordinating each of their movements in unison. In baleen whales, associations between individuals of the same species, with the exception of mothers and their calves, are quite rare and short-lived. The can, however, sometimes be observed in groups during hunting or breeding activities. For example, in Alaska, multiple humpbacks gather to circle schools of herring. There are various possible explanations for this phenomenon: competition, cooperation, access to a reproductive partner, protection of young, etc. The precise reason for these congregations of fin whales in the Estuary remains poorly understood.

On July 10, aboard the Bleuvet, a team composed of GREMM and Fisheries and Oceans Canada researchers placed a telemetry tag on the fin whale Orion. This project aims to understand the where, when, and how of the diets of whales in the Marine Park. The Parks Canada team, from aboard L’Alliance, conducts the prey census in parallel in the sectors utilized by the monitored whale. Orion steered the team well downriver of the Marine Park, and the tag was still holding late into the evening… At the time of writing – July 11, noon – the team had picked up the tag signal again, which had finally fallen off the animal’s back. All that was left to do was retrieve it and download the data!

As soon as the tag had been placed, the field team emailed photos of the whale to the GREMM research station. Mission: find out which individual it is. Not so easy! Photo-identification is successfully employed to study numerous species of cetaceans by following the individual histories of whales recognizable by their natural marks. But this method represents a considerable challenge when applied to fin whales, which exhibit few reliable marks to distinguish them from one another and to recognize them from one sighting to the next.

That said, here’s how we recognize Orion: small circles (now somewhat less pronounced) on the right side of her head, a somewhat damaged dorsal fin tip, short white lines and a comma-shaped depression distinguishable on her right side near the dorsal fin and, ever since an injury she sustained last year, a scar on the peduncle, a body part that she unfortunately does not often show…

Orion has perhaps been present more often than this list would lead to believe. The marks researchers rely on to identify her are subtle enough that she could go unnoticed. Moreover, uncertainty remains concerning certain years, notably 1986, 1997, 1998, 2000 and 2011.