The Thrill of the Season’s First Spouts 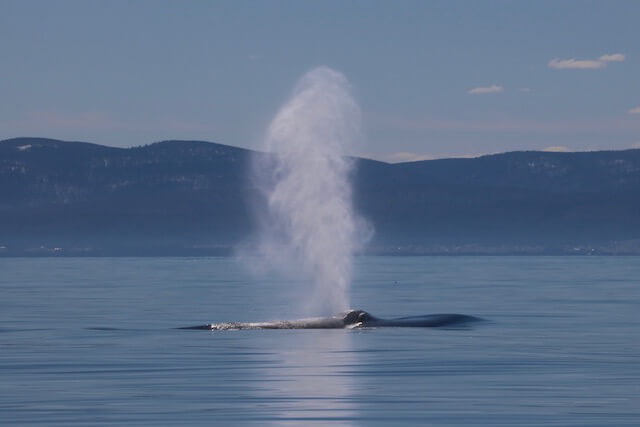 The enormous spout of the blue whale can be seen from kilometres away. © René Roy

In eastern Quebec, the weather is getting milder, migrating birds are beginning to arrive, and icebreakers are freeing the waters of the last chunks of their frozen stranglehold. The whale season is right around the corner! And the handful of large spouts off the coast are just a sneak preview of things to come.

On March 9, a captain posted at the docks in Les Escoumins is delighted to see a fin whale pass about 200 metres from shore. Despite the efforts of many residents, it was not to be seen again. Thanks to tagging studies of fin whales, it is known that an individual can stay under water for 8 to 12 minutes, and that the exact duration will vary depending on the nature of their activities. At these intervals, a whale can quickly disappear from an area without a trace!

Far offshore, on March 14, large spouts erupt opposite the Marine Communications and Traffic Services facilities in Les Escoumins. Is this the return of the fin whale? It’s impossible to know. That same day, a solitary beluga crosses the horizon. The previous day, there were three of them.

On several occasions over the past few days, GREMM’s collaborator Renaud Pintiaux has observed a lone beluga opposite Cap du Bon-Désir in Les Bergeronnes. With each dive, it shows its tail, a relatively unusual behaviour for belugas. Some individuals show their tail because they have a spinal column deformity. Others might have different lower back flexibility than others. Sometimes an animal might lift its tail before taking a quick, steep dive.

In Cloridorme on March 16, a local resident catches sight of two spouts in the distance as she parks her car. The dimming skies put a damper on her observations, but seeing the exhalations of a large whale is already getting her excited about the upcoming summer. 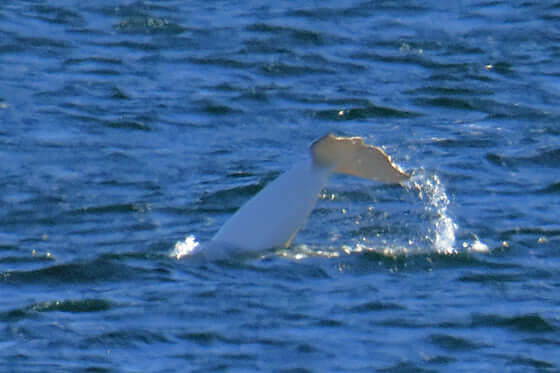 In Baie-Comeau, on March 17, a stroller spots large spouts in the direction of Rimouski. He takes advantage of the sun’s soothing rays to contemplate them. He impatiently awaits the minke whales as they approach the Baie-Comeau wharf. The first minke whales are seen in this area in late March or early April, depending on the season. So he’s on the lookout!

Spouts differ from one species to another due to the shape of the blowholes and their position on the whale’s body. The sperm whale has just one open blowhole on the left side of its head, giving it an angled spout. The North Atlantic right whale has relatively separate blowholes that spray a jet of compressed air to either side, forming a broad, diffuse blast. The spout of the gigantic blue whale is like a geyser spewing from its head. Speaking of blue whales, the female Iris was identified in February off the coast of Matane. René Roy mentions this observation in his field notes.

Many hours of practice are needed to be able to identify species by the shape of their spouts! As with any activity, ID skills can be honed by practising with an experienced individual such as a naturalist.

The V-shaped spout of the North Atlantic right whale is distinctive to the species. © NOAA

Two GREMM employees take advantage of the setting sun to walk along the shores of Tadoussac Bay. Movement in the water catches their attention. It’s two harbour seals that are exhibiting somewhat unusual behaviour. “Looks like they’re chasing each other, I don’t know if they’re playing or if it’s something sexual or fighting, but it’s awesome to watch! They jump, roll, porpoise… One of the two seems to want to chase the other one,” says research assistant Mathieu Marzelière. The lucky observers were able to film some of these interactions, which you can watch here in slow motion!