What happens on the other end of the line while and after a case is reported to the Quebec Marine Mammal Emergency Response Network (QMMERN) call centre? As an example, here is an overview of how one particular case follow-up transpired.

A resident of the Gaspé Peninsula town of Newport informs me that a whale is in the process of becoming stranded just opposite her home. First and foremost, I take note of her name and phone number.

The QMMERN call centre handles calls from both sides of the 1,000 km stretch of river between Montréal and the Gulf of St. Lawrence. Witnesses and volunteers are an integral part of the QMMERN; they are our eyes on the ground.

First step: I ask the witness to describe the animal to me.

In this case, it is on its back and partially floating, near the shoreline. It is dead. According to her, it is quite small and completely white.

Could it be a beluga? The discovery of the carcass of one of these white whales is taken very seriously, given the precarious state of this endangered population.

That said, only visual evidence will allow us to confirm the species with certainty.

In response to my additional questions, the witness actually asks me if I would like her to go take a few photos. “This way, you can see for yourself. My husband thinks it’s a young rorqual… It’s just across the street from us, it won’t be long!”

I receive the photos. Our whale is indeed a rorqual, and it has washed ashore. I quickly notice the white spot on the animal’s pectoral fin, a hallmark of the minke whale.

Once we’ve identified the species, we move on to the next stage of case management: ensuring the efficient exchange of information between QMMERN members.

I advise some of our partners who have previously indicated that they were interested in obtaining skin, fat, muscle or baleen samples when this type of incident occurs. Carcass sampling is a common practice, as these tiny samples can provide valuable information for scientific research. 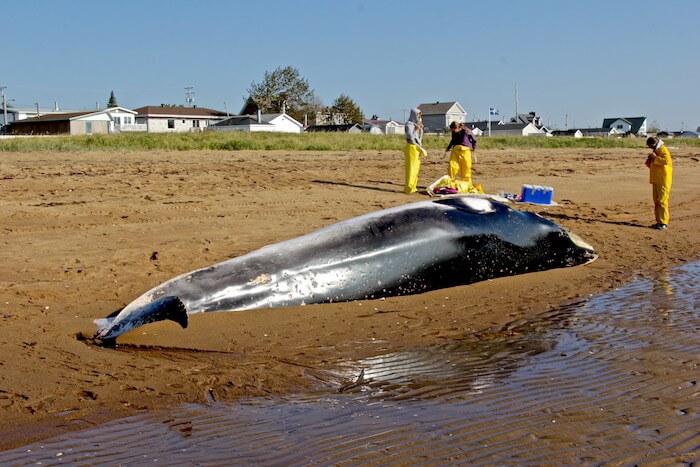 My colleague gets word out of the case to the 13 government and non-profit organizations that belong to the QMMERN. This general notice allows them to stay abreast of the cases that we handle and to be vigilant in the event of an anomaly such as a spike in the number of cases for a given species or a given sector.

Quebec’s Ministry of the Environment and the Fight against Climate Change (MELCC) informs us that it has received a request to dispose of the carcass. It is generally the responsibility of the municipality to eliminate carcasses that are deemed to represent a safety issue or nuisance for local residents. However, small villages like Newport rarely have the infrastructure to effectively move and bury an animal the size of a whale, even a relatively small one. In these cases, the MELCC is therefore generally responsible for moving and burying carcasses. The authorities have already taken steps to have the carcass removed and simply want to make sure it is not hauled away before it has been sampled.

I therefore communicate with a volunteer that our team knows well. She has taken several samples in the past. When I tell her that the carcass has been there for two days, I get a candid “pew, that’s going to reek!” before she enthusiastically agrees to record data and take samples.

She will also attach a tag around the animal’s caudal fin so that we can recognize the carcass if it is found again in a few months, or even in a few years, in the event the tide washes it away before it can be moved by the MELCC.

In addition to being our eyes, volunteers often do the QMMERN’s heavy lifting, in addition to acting as the organization’s spokespersons in the field.

The third stage of the response, follow-up, takes place over the entire duration of a case. Somewhat like this article, it summarizes all actions taken and all communication exchanged for a given case. Emails, phone calls, text messages, conversations, interventions… all interactions and actions related to a case must be recorded in order to provide a clear trail of the case for future reference.

The call center for QMMERN is in the same building as the Marine Mammal Interpretation Center. © GREMM

QMMERN spokesperson Marie-Ève Muller gives an interview about this case with a local radio station. The follow-up transmitted by the QMMERN enables her to provide the public with factually accurate information.

She also takes the opportunity to educate people about the importance of leaving seals alone when they are on land. Oftentimes, Marie-Ève adapts her awareness messages based on recurring or problematic incidents identified by the QMMERN such as seal harassment. Such targeted education means we can be more effective in our efforts to achieve a more harmonious coexistence between marine mammals and humans.