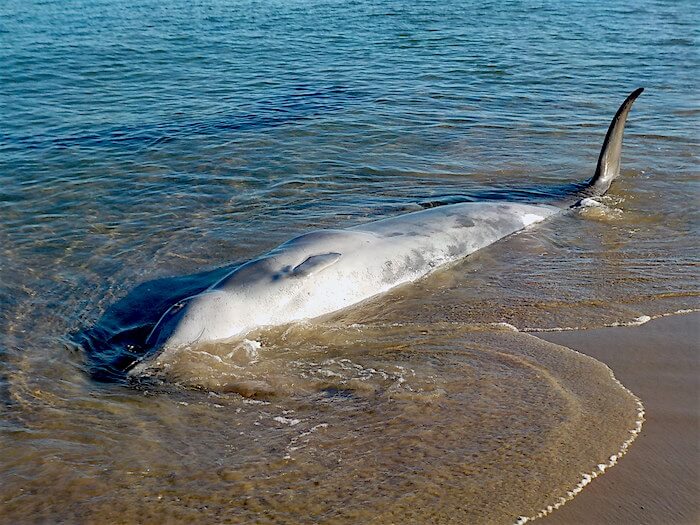 Two carcasses are found side by side on the Pointe-aux-Loups beach on October 13. Observers initially believe they have found two dolphins, one adult and one young. However, they ultimately turn out to be two representatives of the Mesoplodon genus, i.e. beaked whales. For almost a week, photos have been circulating amongst researchers from here and afar, with increasing consensus that these are likely True’s beaked whales. This whale is one of the largest unknown mammals in the world.

The St. Lawrence is not usually visited by beaked whales. However, there have been a few records in recent decades: two northern bottlenose whales (an adult and her young), were found stranded on the Montmagny tidal flats in 1994, and Sowerby’s beaked whales have been found dead at several locations: Forillon Park in 2006, Île aux Pommes (article in French) in 2013 and Escuminac in 2016.

Two northern bottlenose whales were found in 1994 on the tidal flats in Montmagny. © GREMM

These species can be identified either by their prominent skull in the case of the northern bottlenose whale, or the protruding teeth reminiscent of a wild boar in the Sowerby’s beaked whale. The two whales on the Magdalen Island beach did not show either of these characteristics.

The adult found on the beach at Pointe-aux-Loups was in a very good state of conservation. After careful analysis of the photos, Canadian researchers firmly believe that they might be True’s beaked whales. According to literature as well as previous observations, this species is recognized by its round melon (forehead), its relatively short beak and its colour pattern which consists of a medium shade of gray on the back and light gray on the belly. A dark area is also visible around the eye. They measure 2.3 m at birth and the maximum length recorded for an adult is 5.3 m.

After being documented and photographed, the two carcasses were flensed by award-winning local artist Claude Bourque, who plans to use the bones of these rare specimens for his art projects.

He also collaborated with Fisheries and Oceans Canada in sampling some of the anatomical parts of these whales in order to contribute to Dalhousie University’s research projects.

Once the flesh has been cleaned off the bones of the skull, scientists will conduct a more thorough analysis. To date, not a single tooth has been found in the gumline, leaving researchers somewhat perplexed. Subsequent genetic analysis may be able to confirm beyond doubt the hypothesis supported by the scientific community, which has been quite excited by this unusual find. 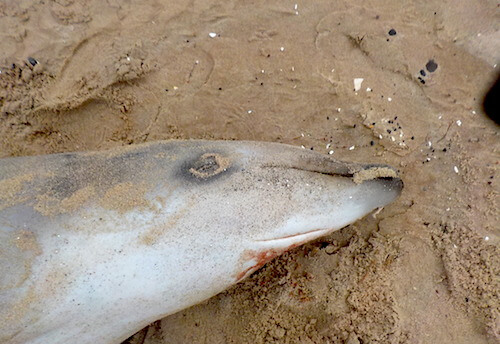 True's beaked whale: the most mysterious of all

There are at least 22 species of beaked whales in the family Ziphiidae, many of which have only recently been described. These whales live far from shore, rarely linger at the surface and dive deep – they hold diving records (article in French) of over two hours, at depths of up to 3,000 m – to feed on their favourite prey, including squid and groundfish.

The True’s beaked whale is often regarded as the most mysterious and poorly understood species in its large family. Long considered a species confined to the Northern Hemisphere, we now know that there are various populations in the Southern Hemisphere.

The True’s, a.k.a. “wonderful”, beaked whale was first described in 1913 by Frederick True based on an adult female found beached in North Carolina. The first sighting of a live specimen occurred 82 years later, in 1995,” says Jack Lawson, a Newfoundland-based marine mammal research scientist for Fisheries and Oceans Canada.

Dr. Lawson performed a necropsy on an adult female that had stranded in Newfoundland in February 2015. To his knowledge, no True’s beaked whale had never been sighted north of Nova Scotia.

In March 2017, researchers from Scotland’s University of St. Andrews made headlines with a video showing two True’s beaked whales swimming off the coast of the Azores. Multiple articles appeared in the media with titles such as “First-ever underwater video of the elusive True’s beaked whale”.