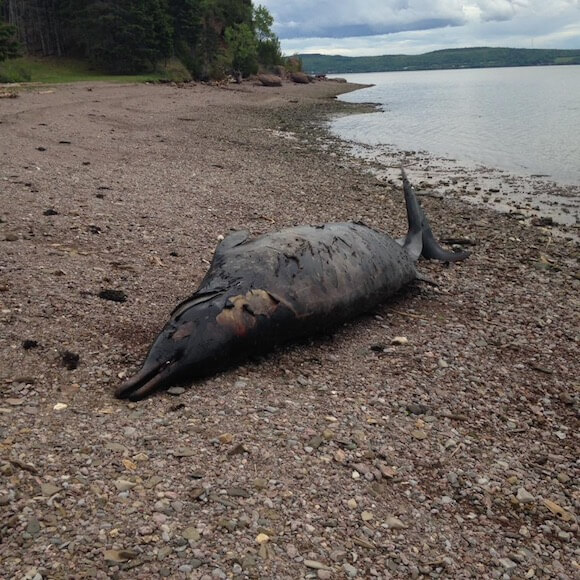 A Sowerby’s beaked whale was reported to 1-877-7baleine on Monday, June 13 on the shores of Escuminac in the Gaspé Peninsula. However, the photos that were submitted dated from the previous Saturday; in the meantime, the whale had washed out with the tide. We therefore believed we had lost this specimen, a rare species in St. Lawrence waters. Against all odds, the whale was found the next day on the shores of Campbellton, New Brunswick. Tomorrow, Saturday, it will contribute to science when it undergoes a complete necropsy. Its skeleton will be added to the scientific collection of the New Brunswick Museum.

Social networks are, in many cases, valuable sources of information. On Monday afternoon, one of the partners of Marine Mammals Emergencies brought to the call centre’s attention photos posted on Facebook of a whale with a distinctive look. The beached whale in Escuminac had a spindle-shaped body and an elongated beak like a dolphin. It was immediately recognized as being from the beaked whale family. A white “spot” on its beak suggested that this was a Sowerby’s beaked whale, as the males of this species have only one pair of teeth, which stick out of the mouth. In Canadian waters, it is believed that the Sowerby’s beaked whale lives mainly in deep waters (over 500 metres) along the continental slope off Nova Scotia up to Davis Strait in the North Atlantic. Observations are relatively rare, which makes it difficult to determine the distribution patterns of the species. Available data suggest that Sowerby’s beaked whales congregate near the Northeast Channel and the canyons of the eastern Scotian Shelf (the Gully; Shortland and Haldimand canyons). So finding this species in the St. Lawrence always generates a lot of excitement! We recall the specimen found in 2013 at Île aux Pommes (in French) in the Gulf of St. Lawrence that had also caused quite a stir.

Wanting to act quickly to document this exceptional observation, the 1-877-7baleine team made a considerable effort to track down the witness of this stranding. After volunteers arrived at the site of the beached animal, the team found that the whale had been washed away by the tide. After a few exchanges with local residents, it turned out that the whale had washed up on the beach the previous Saturday, but nobody reported it.

Researchers and veterinarians were clearly disappointed not to have been able to study the whale, which is on the list of wildlife species at risk. Each specimen discovered can add another piece of the puzzle of the biology and physiology of this poorly-known marine mammal. Against all expectations, the Maritimes-based Marine Animal Response Network team (MARS) received a call on Tuesday evening whereby the carcass had turned up in Campbellton, New Brunswick, on the other side of Chaleur Bay. Fortunately, the MARS team managed to secure the carcass. The hours that followed were spent developing a complex response plan; with support from Fisheries and Oceans Canada, the 4.8 m long male whale was finally able to be pulled out of the water and transported to the Atlantic Veterinary College in Prince Edward Island, where a necropsy will be conducted tomorrow (Saturday). Subsequently, the whale’s skeleton will be added to New Brunswick’s scientific collection. This famous Sowerby’s beaked whale also has his final public journey on the social networks! 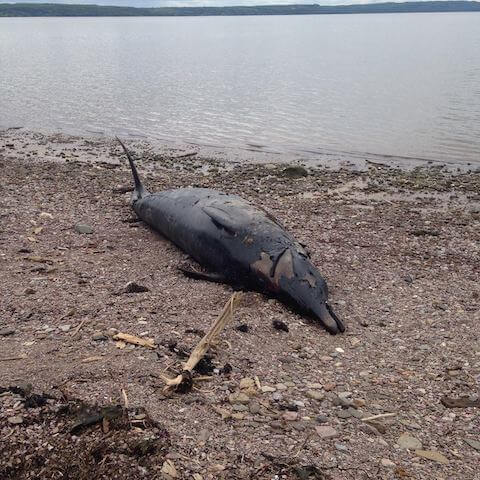