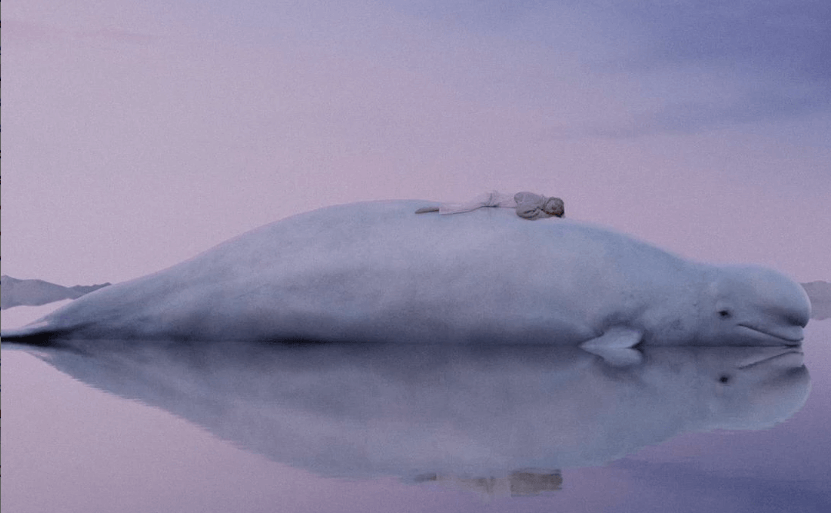 To underscore her concern for wildlife conservation and especially for belugas, singer Pomme chose to write a tune about these white whales. She will donate the proceeds of her song “À perte de vue” to the Group for Research and Education on Marine Mammals (GREMM), a non-profit organization specializing in scientific research and the conservation of the St. Lawrence beluga.

The Québécoise at heart (even if for the moment she has only French nationality) explains her choice to take up the cause of the belugas. “These are the first whales I ever saw in real life, in Tadoussac, 4 years ago. I find them beautiful, pure, and spotting them from shore has become an annual ritual.”

In her music video, Pomme lies on a stranded beluga. If the proportions are a bit exaggerated, they are not that far from reality. A newborn beluga will measure around 1.6 metres at birth, and an adult, up to 5 metres. She sings “We’ve long been mistaken / to think that whales don’t cry.” Whales can indeed produce tears (page in French only), but not exactly like those of humans. The way they express emotions is probably not by crying (page in French only), but whales probably do experience pleasure, grief, mourning, compassion. In fact, belugas lead a complex social life and have several social networks consisting of family and non-family members.

With her delicate voice, Pomme manages to convey the importance of taking action now to ensure the survival of these fascinating animals.

Belugas in need of allies

Worldwide, there are several populations of belugas, the majority of which inhabit circumpolar regions, i.e. the Arctic Ocean. However, a tiny population resides in the waters of the St. Lawrence in Quebec, hundreds of kilometres farther south than any other beluga population. Ever since the ban on whaling which heavily targeted the St. Lawrence beluga, this population has had to cope with an industrialization of its ecosystem, an increase in shipping traffic and pleasure boating and the increasingly tangible effects of climate change. Fortunately, research groups as well as citizen and environmental groups are actively working with decision-making bodies to better understand belugas in order to better protect them.

A voice committed to action

This is the second time Pomme has chosen to lend a hand to belugas. In January 2021, she contributed to the collective adoption of the beluga Bubulle with the royalties generated by her song “Les Animaux sont nos amis”, written with children in the Carleton-sur-Mer region in the Gaspé Peninsula. Adopting a beluga is a generous philanthropic gesture that matches individuals and organizations with a beluga known to GREMM and its team. The sponsors then receive news about their beluga and the work being carried out by GREMM to protect them.

So let’s listen to “À perte de vue” again and again for the belugas, and for fun!

Pomme sings “If I only knew how to save the giants / from our hands that slaughter them as far as the eye can see.” Do you ever wonder the same thing? Great news! There are a number of simple actions that are easy to incorporate into one’s life to help the environment and the beluga’s chances of survival. Together, we can work to ensure that the belugas of the St. Lawrence never disappear.