Are the social relationships of belugas similar to our own? 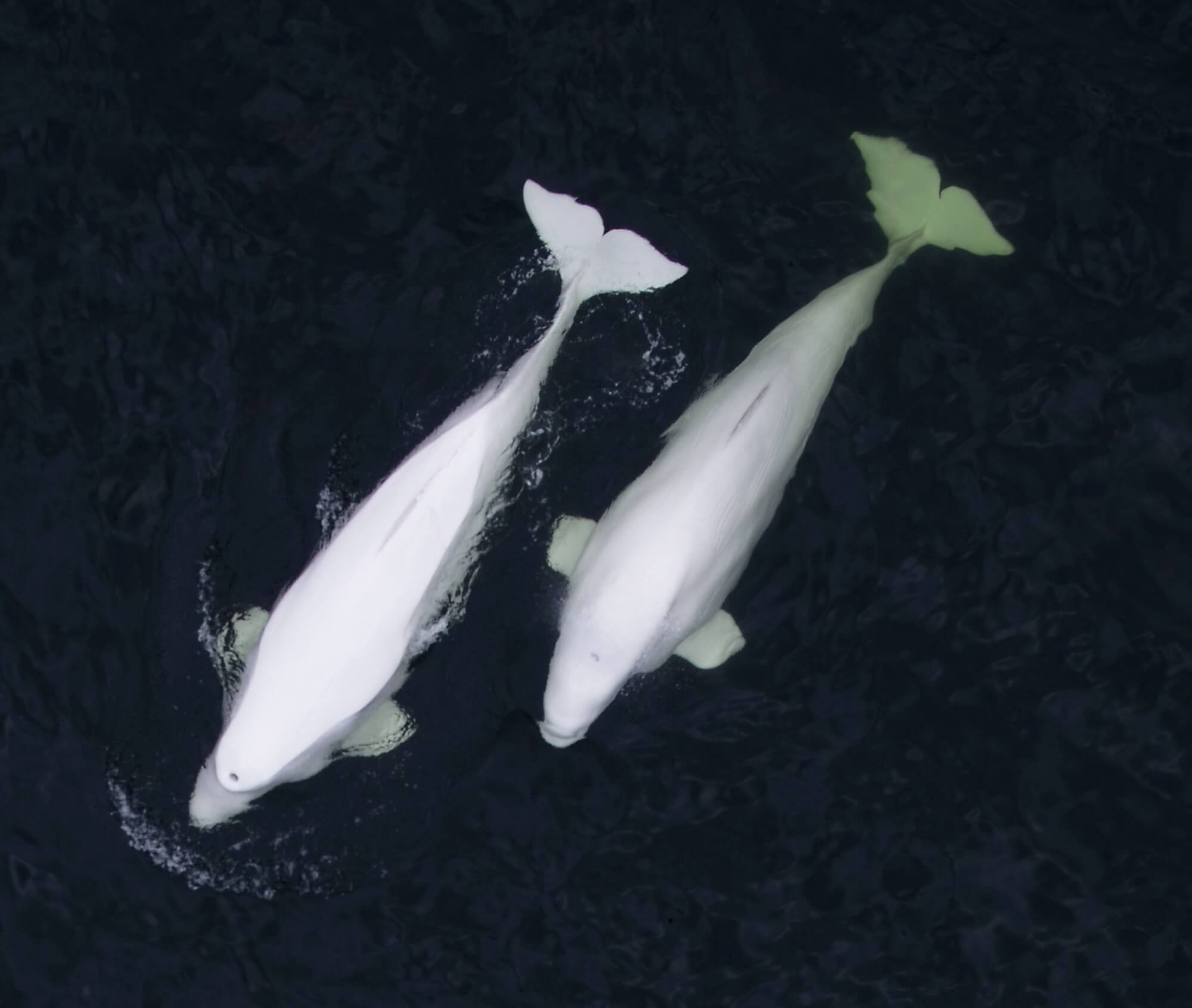 Researchers are studying the complexity of social relationships and the roles that belugas might have in their complex society. © GREMM

Belugas live in remarkably complex societies with very diverse relationships, so much so that they might be considered closer to humans than other cetaceans. These are the inspiring findings that researcher Greg O’Corry-Crowe and his team published in Scientific Reports. The authors offer an astonishing portrait of the social life in belugas.

The authors compared observations obtained from field studies carried out in ten regions of the Arctic, from Alaska to Canada and from Russia to Norway. Molecular genetic techniques applied to samples taken from the different groups and herds observed have been used to shed light on the nature and function of social ties in belugas. According to the study, belugas differ from other cetaceans such as killer whales and pilot whales, species in which social groups revolve around maternal kinships. Belugas maintain companionship relationships with individuals of several different maternal lineages. But that’s not all: the role of fathers might also be more important than what has been observed to date.

The beluga is a gregarious animal and a skilled communicator with its peers. According to Greg O’Corry-Crowe, lead investigator of the study, the sounds emitted by individuals can help them maintain contact, even when they are several kilometres away. Belugas form groups (several dozen individuals or fewer) and herds (up to 2,000 individuals) that vary in composition, but are similar from one population to another. These groups and herds form and disband according to the seasons and environmental conditions. This is the fission-fusion phenomenon.

The study also revealed a host of interactions that reflect the richness of the animals’ social relationships. In groups of females accompanied by calves, scientists noted gestures of shared caring for young, which is known as allomaternal behaviour. They also reported play behaviour in both juvenile-only groups and mixed-age groups. 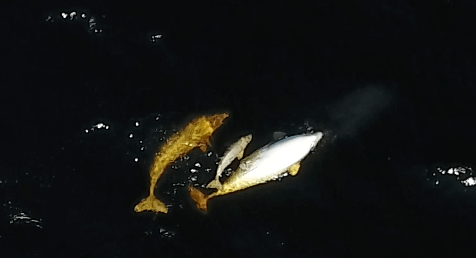 Allomaternal care is provided by female belugas other than the calf’s mother. © GREMM

Genetic analysis: attempting to understand the relationships between belugas

While small groups of females and young are often composed of a single maternal lineage, larger groups can number up to four and herds, up to a dozen or so. In groups and herds of males, which mostly keep to themselves, there are few parent-offspring relationships.

It was in the composition of mixed groups and herds that researchers made an astonishing discovery. As was the case in groups and herds of females and young, they observed the presence of multiple maternal lineages. The surprise was to find several fathers there. In fact, in these mixed herds, paternal ties outnumbered maternal ones. 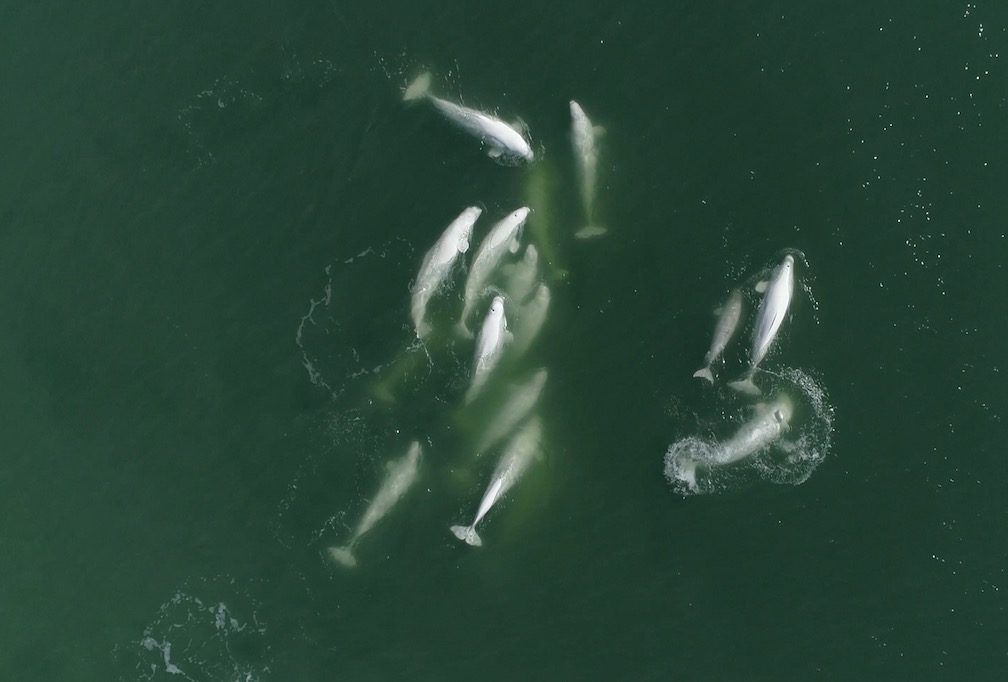 The sounds emitted by these “canaries of the sea” are highly varied and earn them a place in a category of particularly communicative cetaceans. © GREMM

The authors suggest that the diversity of kinships found in the different social groups of belugas is linked to the complexity of their society and to the diversity of the evolutionary mechanisms that shape it. Rather than forming groups based on maternal lineages in which the “benefits” are shared amongst members of the same family, belugas might form dynamic, multi-generational communities in which the “advantages of group living” would be shared not just amongst members of the same family, but amongst members of the entire community. Based on this observation, the authors suggest that the social organization of belugas bears similarities to human societies, in which social networks are not limited to families.

These new observations on social behaviour open the door to further studies focusing notably on the resilience of belugas and their ability to adapt to threats such as climate change. It should be pointed out that the extraordinary variety of social behaviours in belugas still present many mysteries in terms of their role in the evolution of the species.

The authors of the study believe their work will be useful to better understand the more sociable tendencies of certain species. “How do individuals learn from one another?” and “How do animal cultures emerge?” are questions that will require further research before we can obtain more conclusive results.

For GREMM’s scientific director Robert Michaud, “this study offers a stimulating theoretical framework that adds to the possibilities that we can consider in our studies on the social structure of the St. Lawrence beluga.” 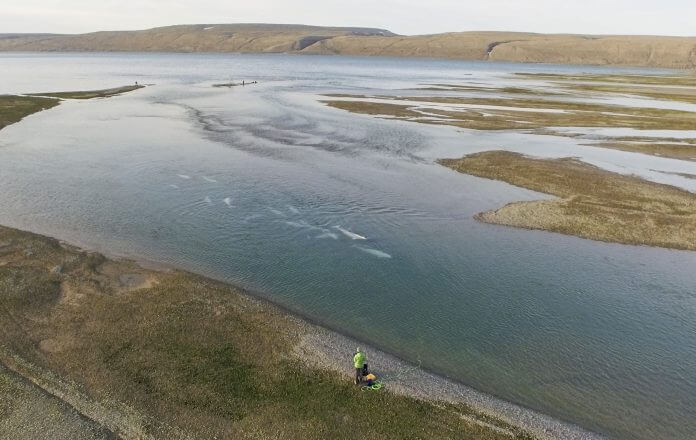 Ongoing studies of St. Lawrence belugas will provide valuable tools for a long-term understanding of the advantages they have in maintaining complex social constructions. © Natural Mystery Films