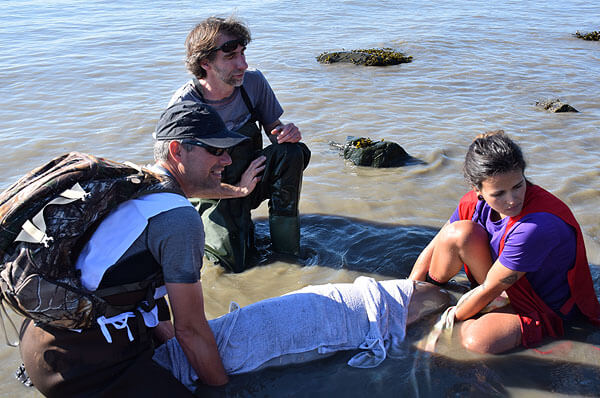 On June 30, 2016, a female beluga just a few hours old was found stranded alive in Rivière-du-Loup. The team from the Group for Research and Education on Marine Mammals (GREMM) conducted a rescue attempt by releasing the newborn back into the water among a group of belugas composed of females and young in the vicinity of Île aux Lièvres.

According to Marine Mammal Emergencies, the newborn has not been reported since it was returned to the water. “It is estimated that the likelihood that such a rescue will succeed is very low, but it is possible,” says Robert Michaud, President and Scientific Director for the GREMM. In order for it to have a chance to survive, the newborn must be adopted and nursed by an adult female, its own mother having probably died after giving birth. According to Josiane Cabana, Call Centre Coordinator for Marine Mammal Emergencies, “Adoption and trans-parental care have already been observed in aquariums.” If the newborn is not adopted, it will quickly die. In fact, newborns are highly dependent on their mother’s care.

The high mortality rate in newborns and female belugas observed in recent years is a concern to researchers. Two female beluga carcasses have already been found in 2016.

Videos
In the Media

A family vacationing in Rivière-du-Loup was in for quite a surprise on Thursday, June 30 when at lunchtime it happened upon a young beluga stranded alive on the pebbly beach during the outgoing tide. Marine Mammal Emergencies was promptly informed of the situation.

Arriving on the scene late that afternoon, the team from the GREMM found that it was a newborn female measuring only 150 cm. The umbilical cord was still present, so she must have been just a few hours old. After an assessment of her condition by veterinarian Martin Haulena of the Vancouver Aquarium, the beluga was deemed sufficiently strong to undertake an intervention to relocate her to a group of females. An incident similar to this one occurred in 2008.

The young beluga was transported aboard the Bleuvet with the collaboration of the towing company Remorquage 2000. A group of belugas composed of females and young was spotted after a little over an hour of searching, not far from Île aux Lièvres. After being returned to the water, the newborn soon found herself in the middle of the group. When the offshore team left the area, the young female was swimming with the other belugas.

The outcome of this intervention is currently unknown. Skin samples were taken from the young animal, which could help researchers in the future to trace this individual and thus add a chapter to this beluga’s biography and to science.

Photo gallery of the intervention © GREMM :