An ancestral activity, whaling is still practised in a handful of countries around the world. Here, a photo of a whale carcass taken between 1918 and 1920 at the Vågane whaling station in Norway. © Kristian Berge

Public opinion seems increasingly concerned about the future of whales, which have become over time a symbol of wildlife conservation. This phenomenon goes hand in hand with the growing popularity of whale-watching and other observation activities. But it has not always been like this. Whaling was once the main human activity associated with these large mammals. But what about now?

Today, three countries still practise commercial hunting of large whales. Norway and Iceland continue to hunt fin whales and minke whales in the North Atlantic, while Japan has recently resumed commercial whaling off its coasts, and sometimes even in the Southern (Antarctic) Ocean. Since 1986, these three countries alone have harvested some 40,000 individuals.

Smaller cetaceans, including dolphins and porpoises, are also hunted by a number of countries. Scientific hunting is authorized by international regulations, but is subject to strict control. Lastly, some Indigenous communities are granted quotas that allow them to harvest certain species.

Today, whale oil, blubber and cartilage are used by the pharmaceutical industry, especially as food supplements. The meat is intended for consumption and served as “traditional dishes,” but is also used as pet food. However, demand in countries that “traditionally” consume whale meat is trending downward, so much so that manufacturers are finding themselves with large stocks of unsold products. 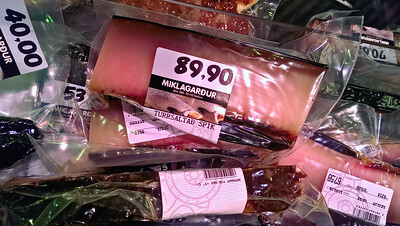 Decimated by commercial and industrial whaling

The first proven traces of whaling by Westerners date back to the 9th century with the Basques. Beginning in the 16th century, the Basques began sailing across the Atlantic Ocean to the coasts of the Americas. At the time, it was mainly North Atlantic right whales that were targeted, a species that derives its name from the regrettable expression that it was the “right whale to kill,” a reference to its buoyancy which makes its carcass easier to recover. 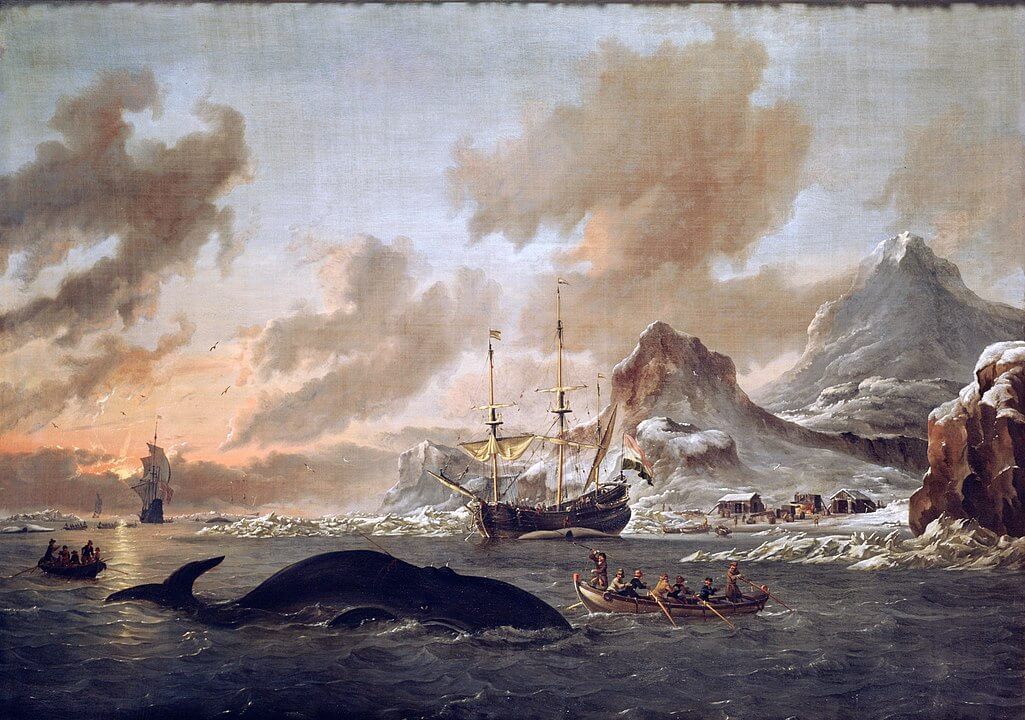 Painting of a Dutch whaling scene by Abraham Storck (1690)

Following centuries of hunting right whales, the late 1800s mark a turning point with the beginning of industrial-scale whaling targeting mainly rorquals. In particular, the whaling industry begins to sell blubber as lighting oil and as a lubricant for machinery. These markets collapse with the arrival of petroleum and its derivatives in the 20th century, while the sale of whale meat continues to prosper, and stocks are progressively depleted.

In the early 20th century, the decline of certain species gives rise to concern and in 1931, 22 countries sign the first convention for the regulation of whaling. However, several major whaling nations such as Japan and Germany refuse to join the agreement and 43,000 animals are killed that same year. Studies have shown that 2.9 million large cetaceans were harvested globally over the course of the 20th century. 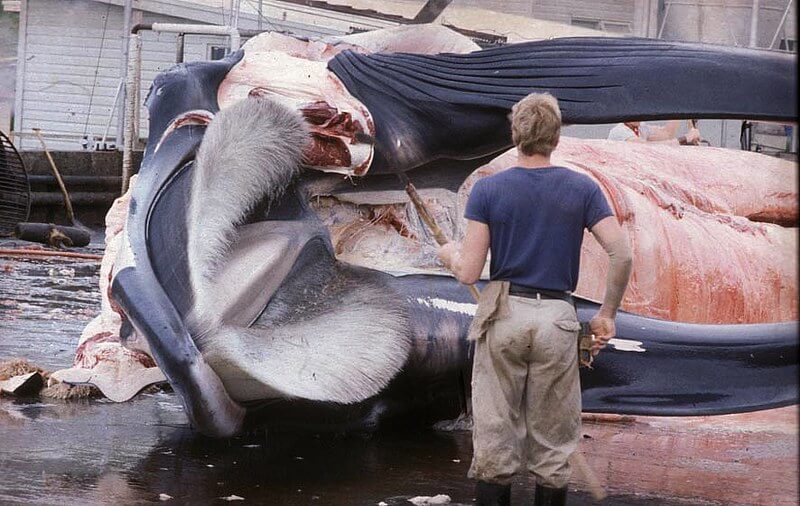 It was not until 1948 that 15 countries, mainly whaling nations, create the International Whaling Commission (IWC) with the aim of regulating activities and managing stocks through the distribution of species-specific quotas. The organization now has 88 member countries.

Beginning in the late 1970s, nations that never practised whaling but concerned about the plight of these marine giants join the commission, which helps expand and accelerate the adoption of conservation measures, especially thanks to the creation of an international sanctuary in the Indian Ocean and then in the Southern Ocean in 1994. In 1986, whaling is officially banned in the world with the enactment of an international moratorium.

Although the IWC’s prerogatives have since evolved to take on more of a species conservation role, this system nevertheless has a number of limitations. Generally speaking, in international law, the principle of state sovereignty takes precedence over all other rules. There are therefore no coercive means to prevent certain governments from violating the regulations in force. More specifically, within the IWC, countries have the opportunity to object to any decision within a period of 90 days. This is what happened to Norway and Iceland during the moratorium on commercial whaling, which explains why these states still continue to harvest whales and are not subject to the conditions stipulated by the IWC. 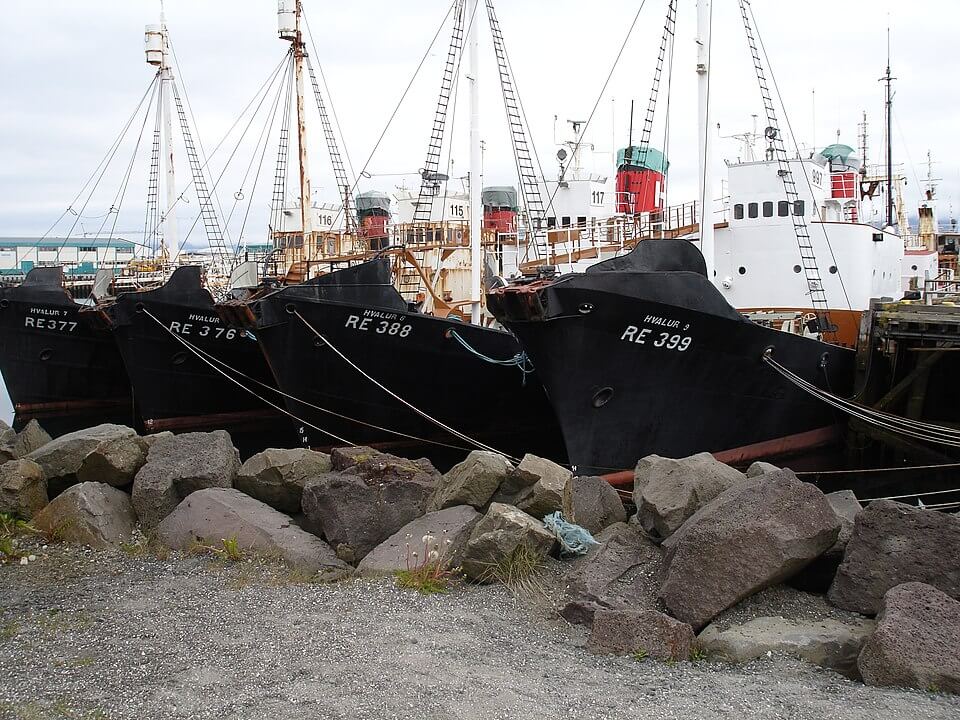 From the very outset, whaling for scientific purposes was authorized by the Commission. However, following numerous abuses and after a petition filed by Australia before the International Court of Justice (ICJ) (page in French) against Japan, a resolution is adopted in 2016 to better assess and regulate the practice.

Indeed, some countries were using this legal loophole to continue their whaling activities and catches often ended up in the marketplace. It is for this reason that Japan was condemned by the ICJ in 2014 and forced to put an end to its JARPA scientific program. This research project – intended to study the behaviour and renewal of minke whale populations in Antarctica in order to be able to resume “sensible” whaling once the species’ stocks recovered – led to the slaughter of 300 animals per year. Humpback and fin whales were also added as potential targets under the JARPA II program, launched in 2005.

Following its condemnation, the country suspended its hunting activities for one year before resuming them for the 2015-2016 season. Japan ultimately quit the IWC in 2018 and officially resumed commercial whaling the following year. Of the three species harvested by the Japanese, one – the sei whale – is classified as “Endangered” on the Red List of the International Union for the Conservation of Nature (IUCN). 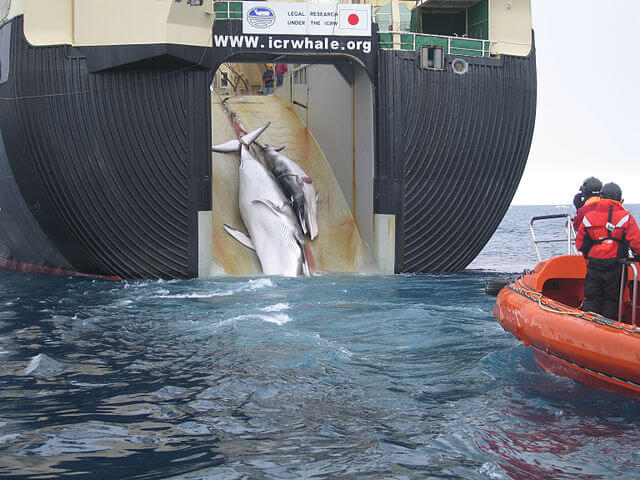 Capture of a female minke whale and her calf aboard the Nisshin Maru in Japan. This is the only fish-processing vessel in the world that handles whales. © Customs and Border Protection Service, Commonwealth of Australia

Being intimately linked to the history and culture of certain populations, whaling is still practised today by a number of communities around the world. Even if certain points of contention persist between some scientists and whaling advocates – notably in Denmark – this traditional so-called “subsistence” hunting should be differentiated from commercial hunting on a global scale, which has led to the decimation of certain species.

Whaling is considered an essential component of some northern cultures, notably in Nunavut. Among the Inuit, this practice contributes to food security in a land where food is scarce, in addition to helping perpetuate traditional craftsmanship. This activity has an important social dimension, as whales are considered to bring genuine value to the community. The practice of whaling is highly ritualized: The animal is considered sacred and thanks is given before and after its death.

Such practices are also observed farther south, in certain islands of Indonesia and along the coasts of mainland Southeast Asia, as well as in the Caribbean. 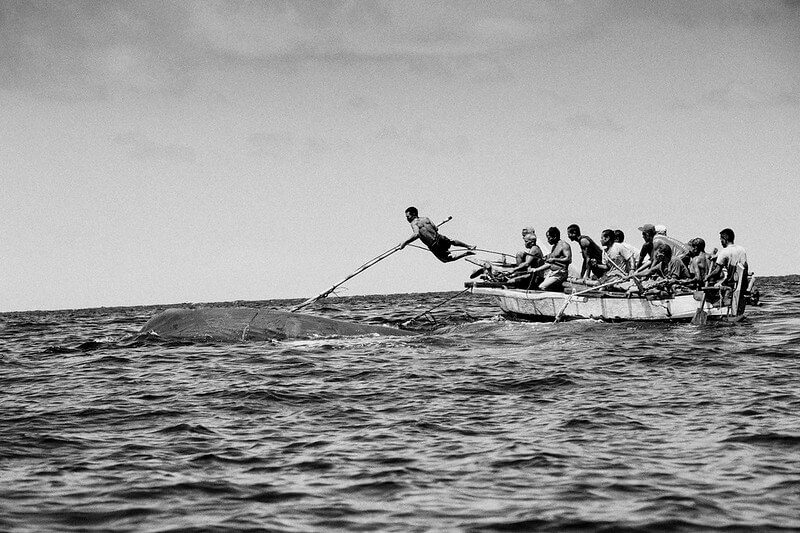 Today, Greenland, the United States, Russia and Saint Vincent and the Grenadines receive subsistence fishing quotas from the IWC. Canada, having withdrawn from the IWC in 1982, grants its own quotas to local communities.

Nevertheless, reservations have been expressed on the merits of this type of hunting, namely by associations such as Whale and Dolphin Conservation. Criticisms mainly relate to the lack of conditions to be met by the communities benefiting from this exemption or authorized to hunt endangered species. It has also been revealed that the meat of certain animals harvested under this type of exemption sometimes ends up being marketed to tourists, which contradicts the very principle of subsistence hunting. Traditional hunting also raises the question of animal welfare, since the whales likely take longer to die on average than they would if harvested using industrial means.

What about smaller whales?

In Quebec, the Iroquois historically practised traditional beluga and porpoise hunting before the first Europeans arrived. The Basques began hunting belugas in the 17th century. Thanks to subsidies by the Quebec government, the 1930s were marked by intensive harvesting of belugas, as they were considered to be a threat to fisheries. This hunt ended in the 1950s. Today, whaling is prohibited in the Marine Park and in the entire St. Lawrence.

Unlike activities related to larger whales, the hunting of small cetaceans such as porpoises or dolphins is not subject to international regulations. Although the IWC does not have a specific mandate for these species, killing them remains illegal in many countries. Nevertheless, it is estimated that around fifty species of dolphins, porpoises and small whales are still hunted in over fifty countries.

In recent years, the IWC has also been addressing the topic of bycatch, i.e. incidental catches in fishing nets. It appears that the meat of these “accidentally” caught cetaceans is often sold on the market. 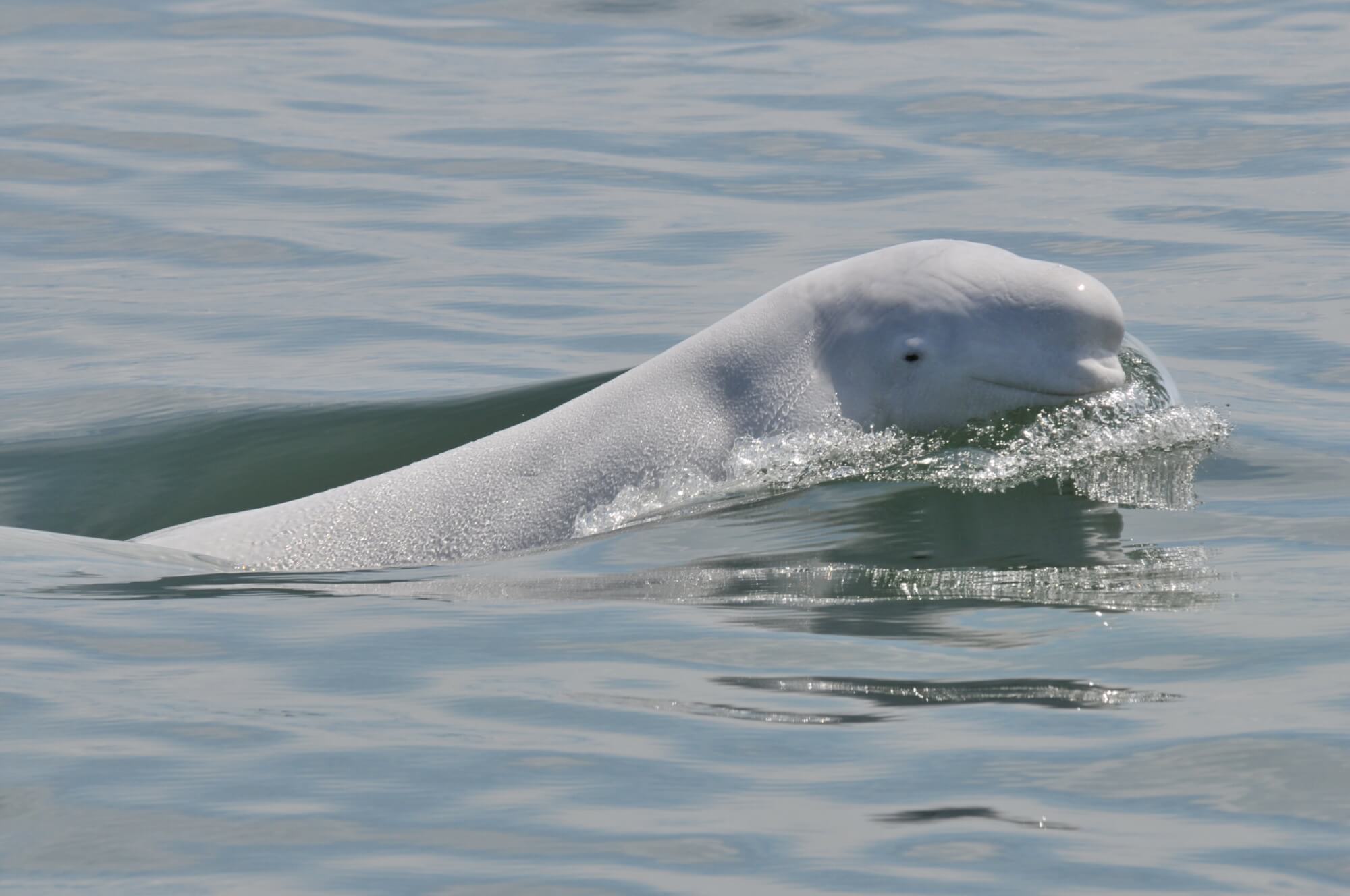 Formerly referred to as porpoises, belugas were once hunted in Quebec. © GREMM 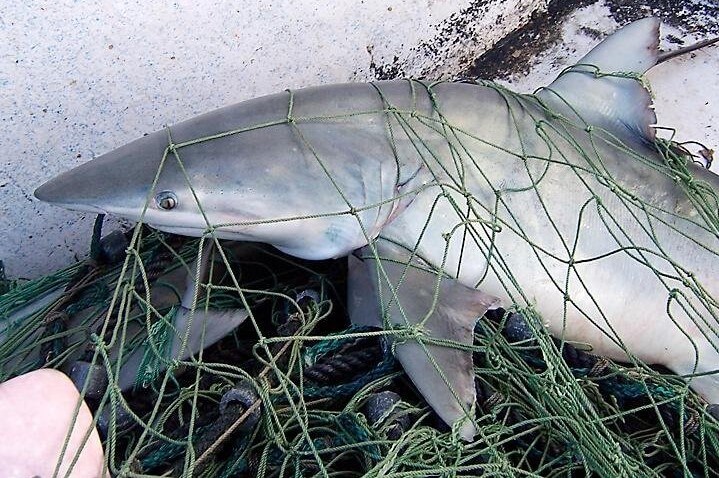 It is estimated that around 100,000 dolphins, porpoises and small whales are killed every year. The best known hunting grounds are Japan’s Taiji Bay and the Faroe Islands. In Japan, animals are often captured alive and then sold to dolphinariums. In the Faroe Islands, hunting pilot whales and white-sided dolphins is considered a traditional practice. A total of 1,428 dolphins were killed on the night of September 12, 2021 alone.

For larger whales, hunters usually use explosive harpoon guns mounted on the boats they operate. The whales are shot with explosives that burst as soon as they penetrate the animals’ flesh. If the animal does not die instantly, which happens regularly, a second shot is fired or it is finished off with a rifle. Sometimes hunters let the whale suffer until it dies, which can take up to 25 minutes.

Smaller species are often harvested using a method called directed fishing. Used in shallow waters, this technique involves emitting underwater sounds to create a sound wall to frighten and disorient the animals. This drives them closer to a bay or beach where they can be speared or caught. Some animals will be dragged to shore alive using hooks inserted directly into their flesh. 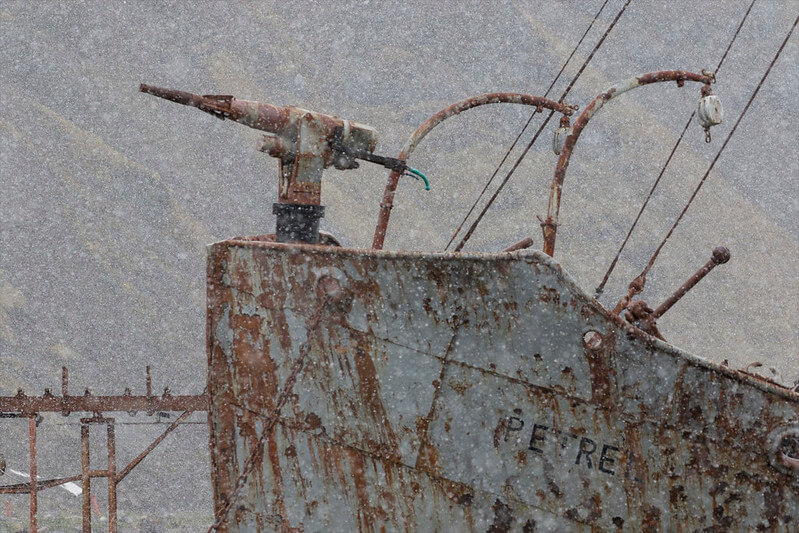 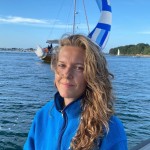 Lise Faure grew up near the sea in Britanny (France). She became aware of the importance of preserving marine ecosystems at an early age and chose to study political science applied to the environment. After crossing the Atlantic Ocean, she joined the Gremm to share her fascination for the whales of the St. Lawrence. 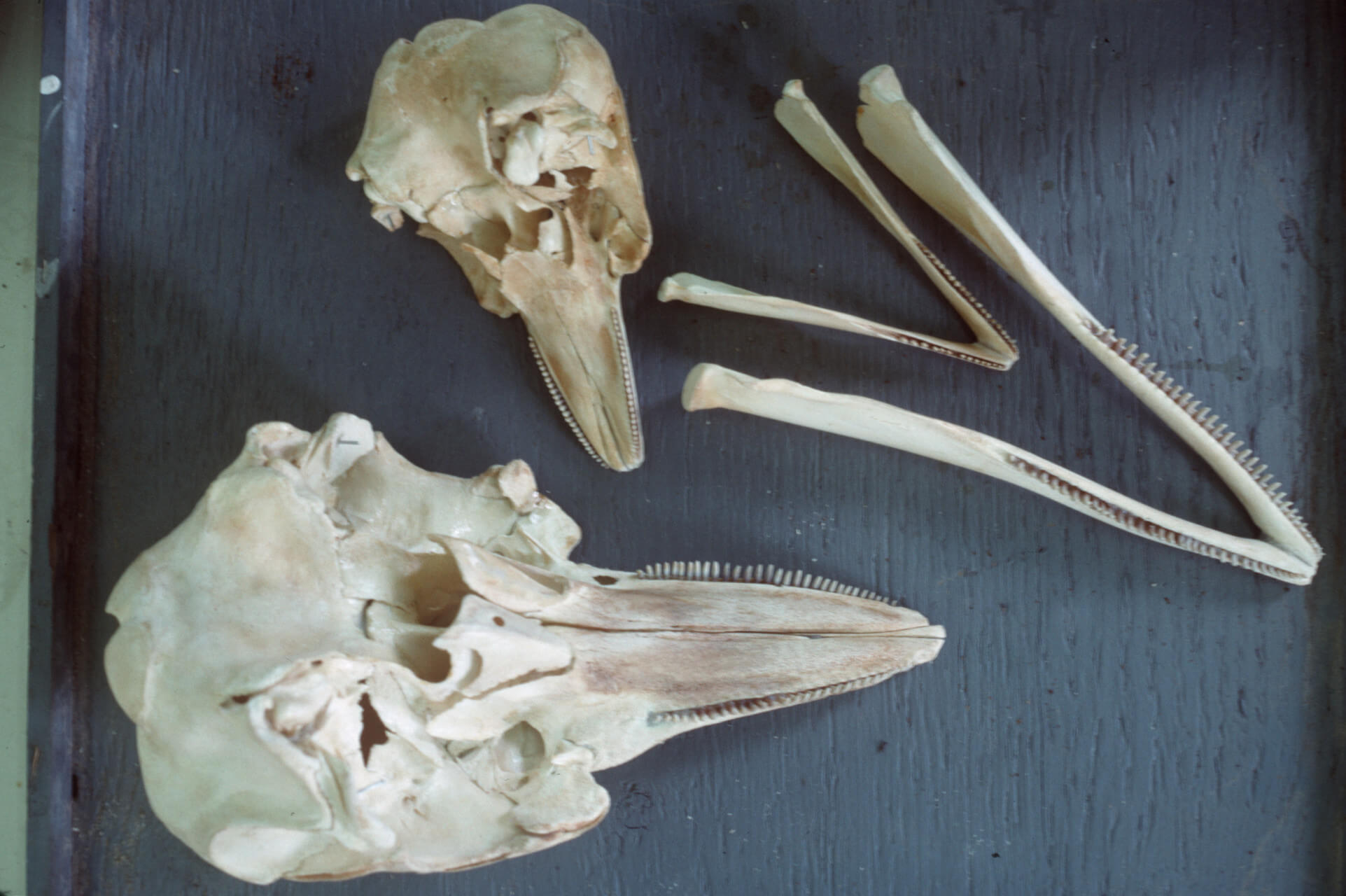