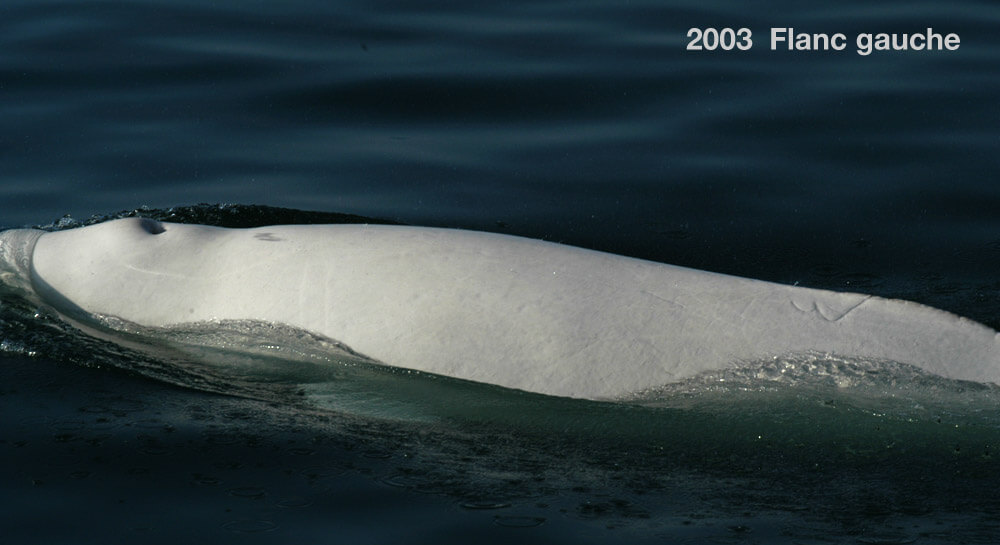 Adopted by the city of Montréal

You have to look at the end of Splash’s peduncle to see his biggest mark. This deep scar is visible on both flanks. His dorsal crest contains a multitude of details. He also has a gray spot behind his blowhole. 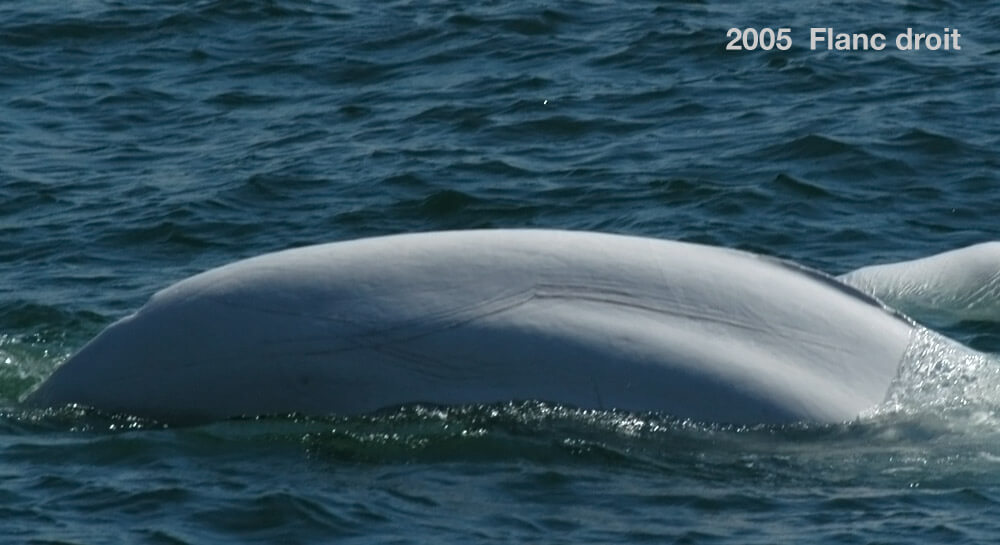 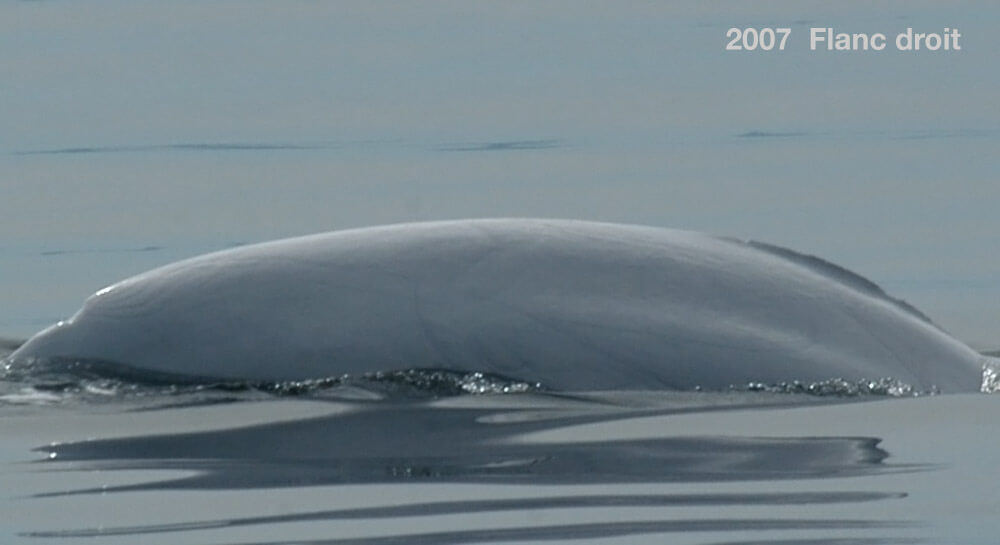 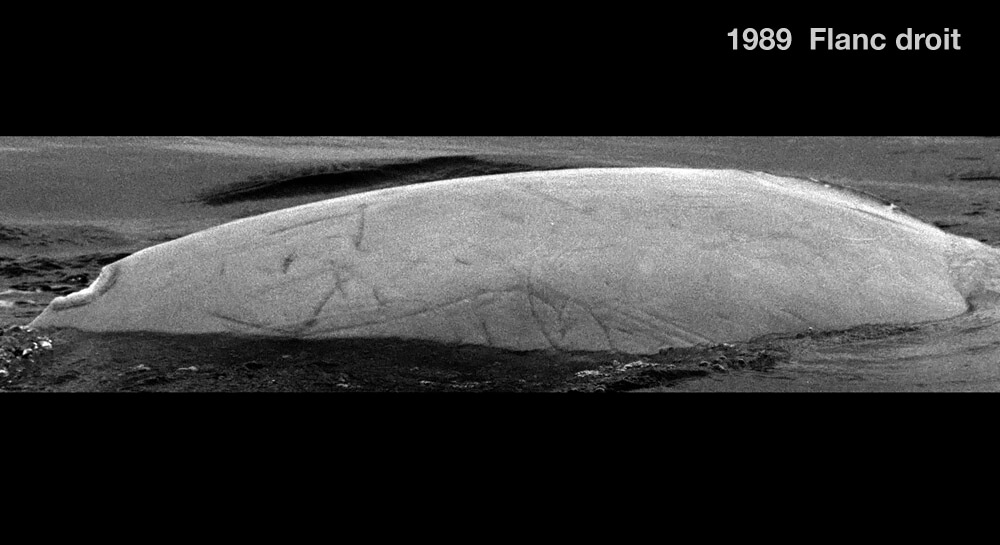 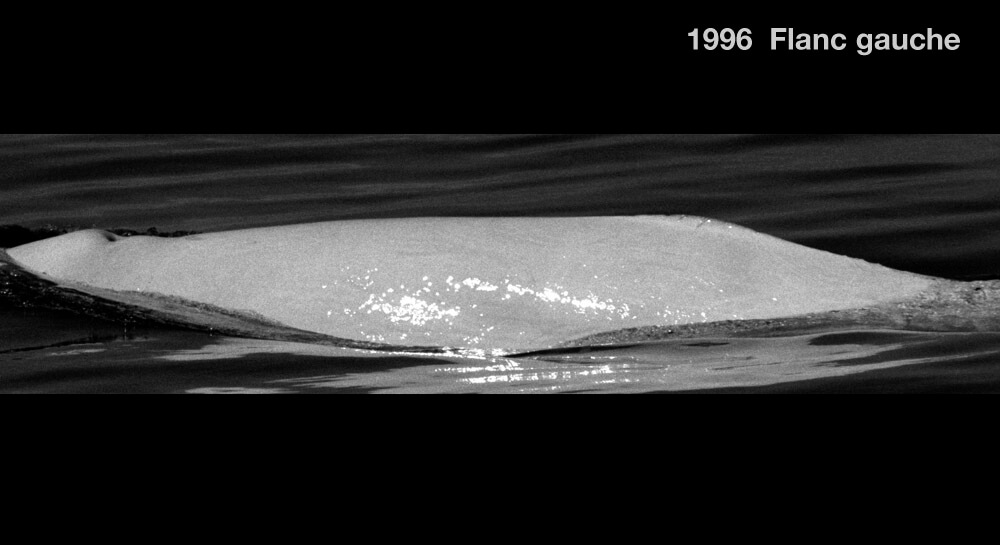 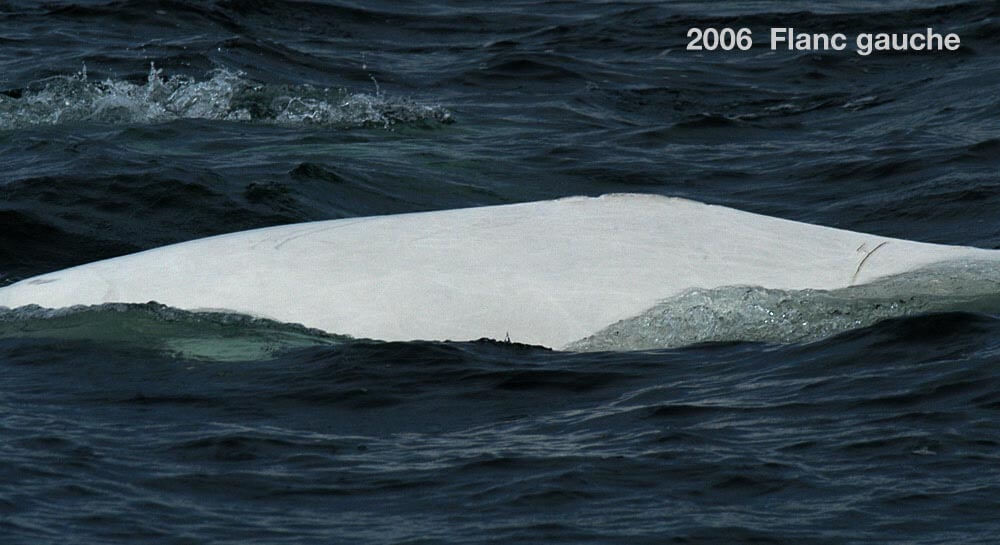 When we first encountered him in 1989, Splash was gray. He began turning all white in the early 2000s. Belugas fade from gray to white in colour between the ages of 12 and 16. Based on his size at our first encounter and the evolution of his colour, Splash may have been born around 1985.

With the years, males have a tendency to form stable groups of companions. These associations may play a role in belugas’ reproductive lives. Although Splash has been seen on a few occasions with Louveteau (another beluga adopted by Montréal in 1989), Frimas and Dance-Sea, as of yet he has known faithful companions.

How Splash’s story unfolds will teach us volumes on the evolution of belugas’ social lives. For example, which sector will he favour as he ages? Who will his lifelong companions be? By better understanding how belugas live, we will better be able to protect them.

Splash is observed off of Île Rouge. We have the impression that we’ve come upon the same beluga herd as the one we encountered the day before in the vicinity of Cacouna. Comprising about 70 belugas, the herd forms a long stationary line running parallel to the coast. The sector is a hot spot of activity, with gray seals and minke whales interspersed throughout the herd. Around noon, the wind picks up. We lose sight of the individuals swimming upriver from the herd. Despite the weather conditions, we manage to perform a biopsy on one of the belugas.

We set sail for the downstream sector, where we regularly come into contact with herds of males. We cross paths with Splash near the north shore. It is in a herd of 30 belugas, mostly white adults and a few young grays. After an hour of monitoring, the herd grows larger and now numbers about 40 individuals.

The animals are very active. Some belugas poke their heads above the surface as if to spy on us, others raise their tails out of the water. We can hear all sorts of vocalizations. A group of six individuals breaks rank with the rest of the herd, dozing off at the water surface. Then they begin to dive and resurface multiple times at the same location, a behaviour known as “milling”, which is often associated with feeding. With its particular oceanographic conditions, this sector is teeming with prey! We attempt to perform a biopsy on one of the individuals, but unfortunately we miss our mark!

Off the coast of Île Verte, we come across a herd of thirty adult and juvenile belugas. Strong waves are rocking the Bleuvet, but we are determined to photo-ID the animals. The belugas are swimming toward the islands of Pot à l’Eau-de-Vie, or “Brandy Pot” in English. Through the waves we recognize Splash, who is swimming with a small gray beluga. After an hour of observation, the animals begin swimming in circles and then in opposite directions. We conclude the encounter by taking a biopsy.

The crew aboard the Bleuvet encounters Splash at the mouth of the Saguenay in a herd numbering some one hundred individuals. The majority are white adults, though ten or so are still gray but quite large, most likely belugas that are entering adulthood. Belugas turn entirely white between the ages of 12 and 16.

The city of Montréal adopted Louveteau (1989), Splash (2014) and is participating in the solidary adoptions of Neige, Nics, Solidaire, Bilou and Cica with other riverside municipalities of the St. Lawrence (2014).

Splash was named by the school day care services of the École Saint-Jude in Châteauguay as part of the Our Beluga’s Name is… contest.