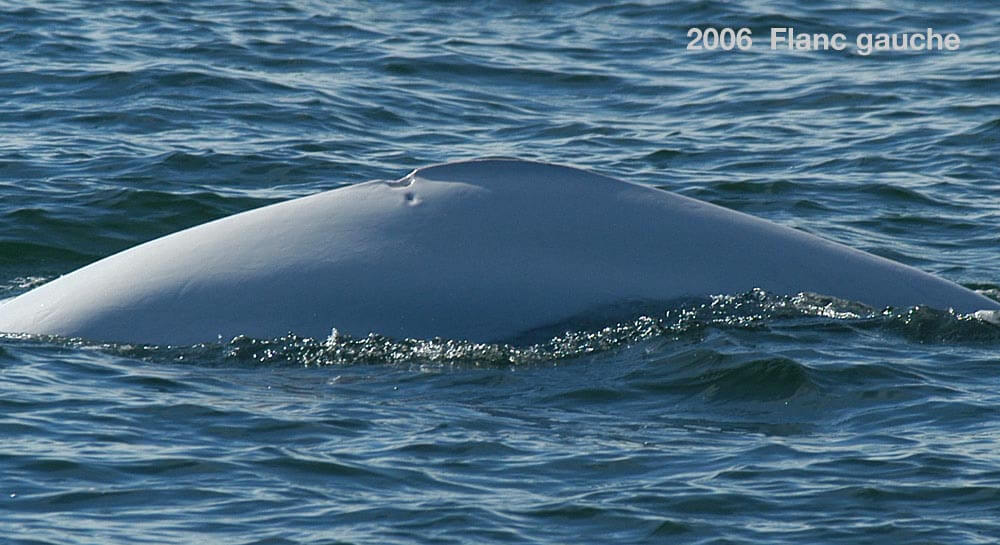 Coeur is distinguished from other belugas thanks to the deep scar at the start of his dorsal crest. Just below this is a small spot on each flank. 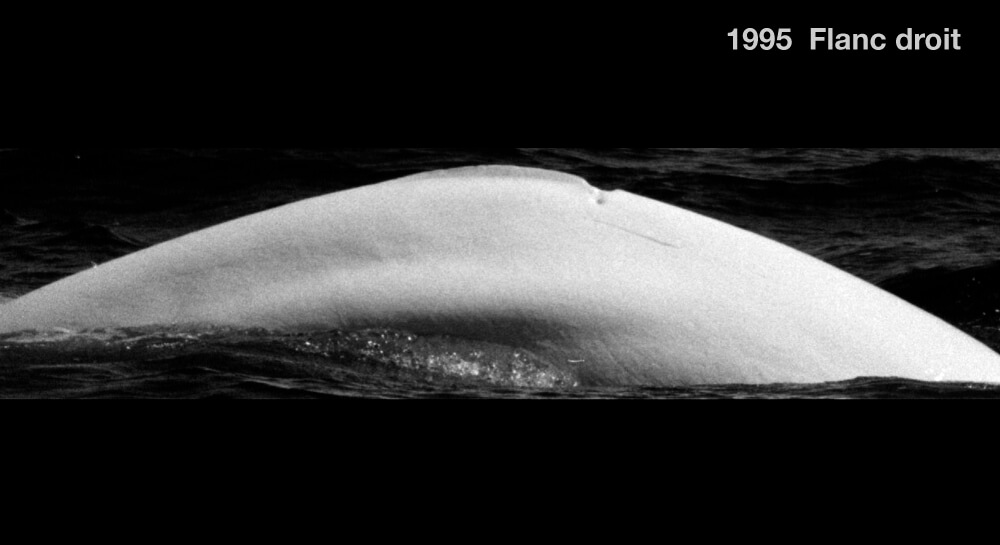 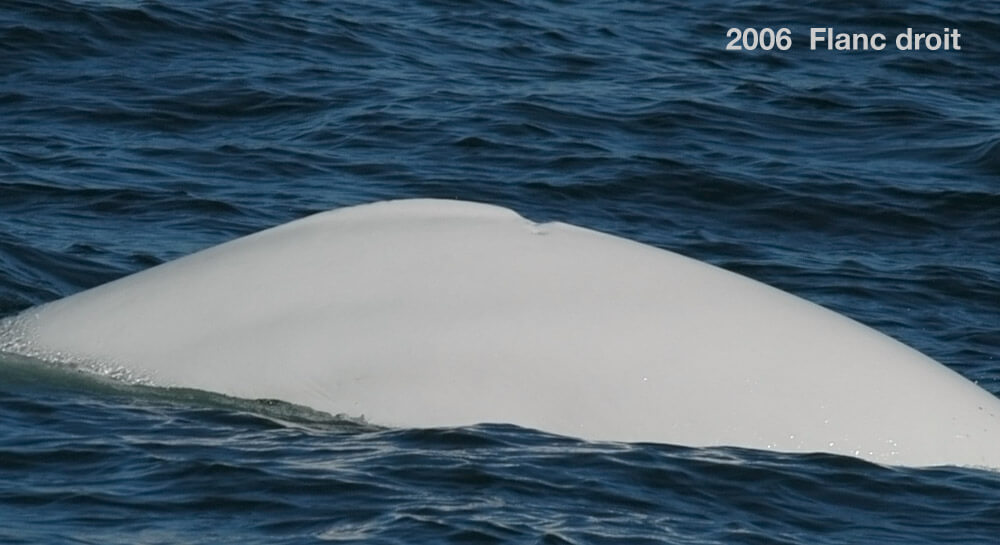 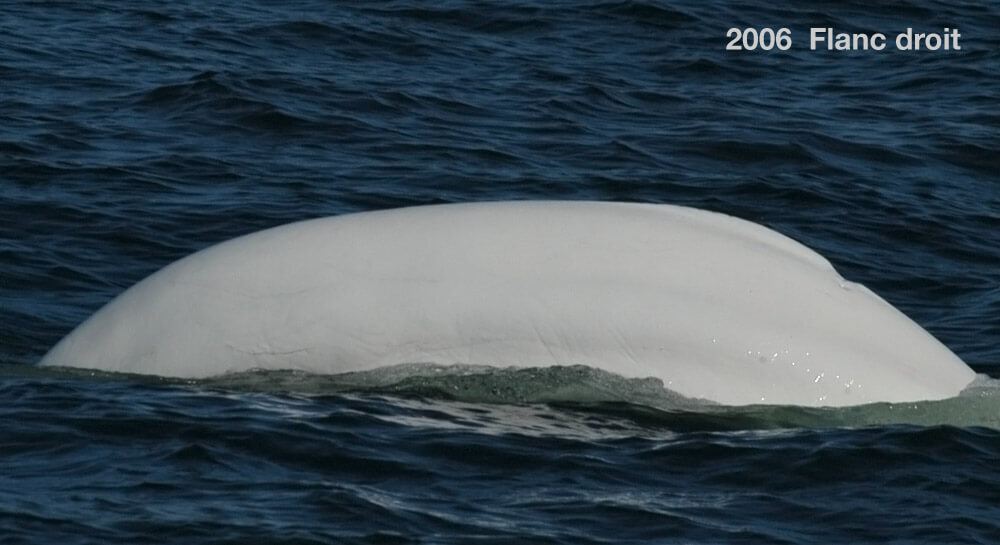 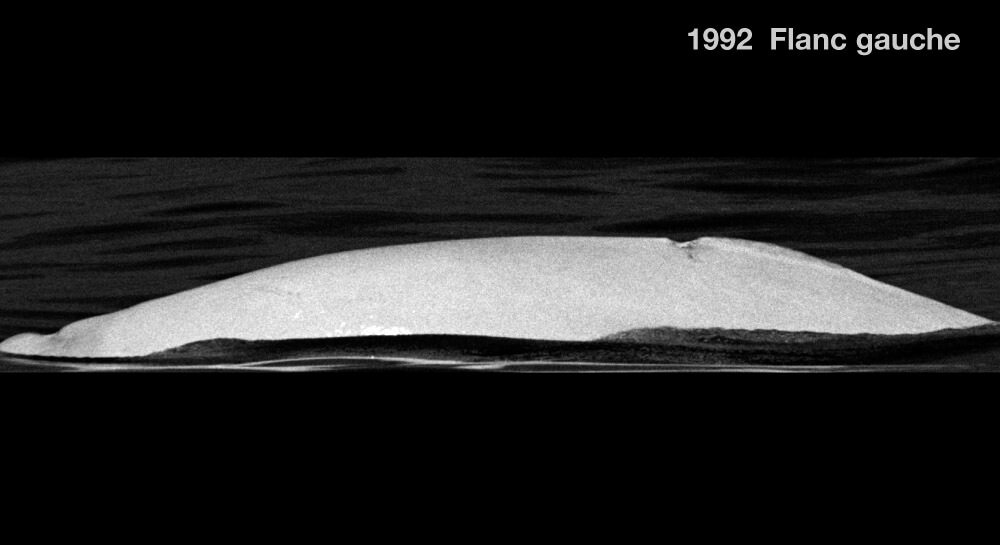 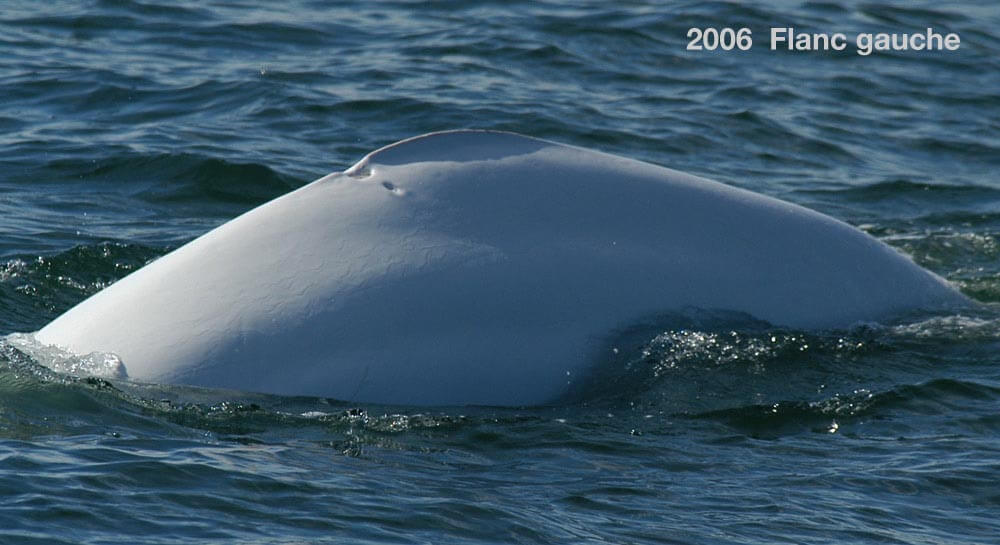 We first encountered Coeur in 1992. At the time, he was already white. Belugas fade from gray to white in colour between the ages of 12 and 16. Coeur would therefore have been born before 1980.

His large size and social affiliations suggest that Coeur is a male. Like other adult bulls of the population, he spends most of his time in herds composed essentially of males. Three networks of males are known: two of these navigate the Saguenay Fjord and the head of the Laurentian Channel, while the third one, the “Downstream Boys”, also uses the head of the Channel as well as the downriver portion of the Estuary, but avoids the Saguenay.

Within these networks, adult bulls form stable groups of companions. These associations may play a role in belugas’ reproductive lives. Coeur is not yet known to have any faithful companions, but he is regularly observed with DL0058. Neither of these two individuals has ever been observed in the Saguenay River, which leads us to believe that they may be members of the “Downstream Boys”.

How Coeur’s story unfolds will teach us volumes on the evolution of belugas’ social lives. By better understanding how belugas live, we will better be able to protect them.

On September 25, 2015, off the south shore, we observe a herd consisting of some thirty individuals, a combination of adults and young. Visibility is excellent and we spot two males, Cœur and DL0058, who are swimming in synchrony amongst a group of eight large adult belugas. A short distance away from this group, we recognize two females, Conferon Connie and Pascolio, in the company of several young grays and a newborn. Several individuals approach the research boat, evidently quite curious. We even hear the animals make a few vocalizations. The interactions make for very emotional moment!

We recognize Coeur in a herd of about 25 adult belugas off the piers of Les Bergeronnes. Amongst them, two individuals surface whose bodies are covered in mud. This observation leads us to believe that they had dived down to the sea floor to feed on benthic organisms embedded in the sediment. To catch such prey, belugas have to stick their heads in the muddy bottom! They use their mouths like a vacuum cleaner.

In fact, suction is their main means of capturing prey. Belugas only use their teeth to bite into their prey, which they swallow whole. They feed especially on groundfish and invertebrates. They also hunt in the water column and near the surface while swimming or treading against the current.

Aboard the Bleuvet, off the coast of Les Bergeronnes, we observe a herd of about thirty belugas, all adults. The size of the individuals suggests that the herd is predominantly composed of males. Among them are Cœur and Cumulus. The belugas, which are at a considerable distance, are heading down the St. Lawrence. They stay on the surface for extended periods and take short dives. Little by little, the animals become less dynamic, many of them even beginning to swim in one place. After two hours of observation and photo-identification, we notice that another herd is about to join our belugas. We move toward them in order to better photograph and study them.