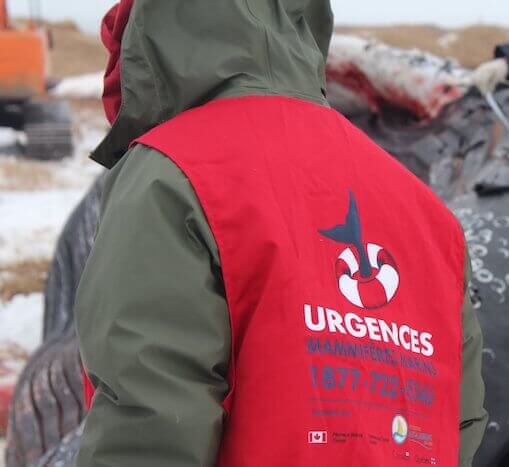 In its 12th season, 1-877-7baleine team expended considerable effort to process no fewer than 410 calls from citizens reporting dead or distressed marine mammals. A total of 164 cases of seals and whales were processed, with the vast majority being carcasses found beached on the St. Lawrence shoreline or drifting in the waters of the Estuary and Gulf. Several cases of live seals being disturbed by residents were also recorded.

A diversity of species, threats and scientific projects

The St. Lawrence is a rich ecosystem that hosts more than fifteen species of marine mammals, not to mention rarer species that sometimes wander into our waters. Marine Mammal Emergencies dealt with cases involving various species of young and adult seals, harbour porpoises, white-sided dolphins, belugas, minke whales (19 in total) and even large rorquals.

One exceedingly rare incident was that of a young blue whale found dead off the Gaspé Peninsula this fall, while another blue whale was involved in a collision with a watercraft, an exceptional story that made many headlines this summer.

Beluga mortalities also prompted researchers to investigate a continuing “tragic trend”. No fewer than 16 carcasses were studied this year, including 9 adults and 4 newborns, almost all of them females. We recall an incident involving a newborn female found stranded alive on June 30 in Rivière-du-Loup and released by the team of the Group of Research and Education on Marine Mammals (GREMM), (GREMM), a story whose outcome is still unknown.

The threats to marine mammals are also diverse: by-catch, disturbance, ship strikes, habitat contamination, all of which are studied by the dozen or so partners involved in the Quebec Marine Mammal Emergency Response Network. Veterinarian Stéphane Lair of the Université de Montréal’s faculty of veterinary medicine has been studying the health status of belugas as part of a program that dates back over 30 years.

For their part, Fisheries and Oceans Canada researchers and their collaborators are investigating contaminants accumulated in the tissues of rorquals and the causes of mortality for species at risk. As for seals, each carcass is documented in order to identify the species, age and, if possible, the most likely cause of death.

Other less common species have been reported to the 1-877-7baleine call centre, including moon fish, a leatherback sea turtle, a bearded seal and North Atlantic right whales observed in areas that they do not usually frequent. Caution was the buzzword on the Lower North Shore this summer, where the Mingan Island Cetacean Study (MICS) recorded the presence of right whales almost all summer long, with up to a dozen or so individuals sometimes occurring in one area. These slow whales that remain near the water surface are vulnerable to collisions, especially when they swim in the heart of the seaway. Additionally, warnings were issued to Merchant Marine.

A dedicated network of volunteers

Every call made to 1-877-7baleine is important and processed as soon as possible. In each case, the first response will be provided in the field by one of 125 volunteers registered with the Network. Since 2012, Marine Mammal Emergencies has been recruiting residents to broaden the scope of its interventions along the St. Lawrence River. Some volunteers have been around since the Network’s early days; oftentimes, they chose to get involved after having witnessed an incident involving a marine mammal. This past summer, when a pilot whale (a type of large dolphin about five metres long) was found stranded alive, it was one of the volunteers who coordinated the release attempt back into the water, an intervention that involved about ten or so volunteers in total.

Then, in October, a humpback whale ventured into Gaspé Bay, near a mussel farm. Being that a minke whale had become entangled a few weeks earlier, Marine Mammal Emergencies, with help from volunteers, set up a watch to track the whale’s movements and be prepared to quickly intervene should the whale find itself in a vulnerable position.

People’s involvement in this citizen science is often impressive. Residents of Anticosti Island quickly mobilized when three white-sided dolphins ran aground on the coast of the island. The next day, they were back on site, picking up the carcasses of the cetaceans that had been unable to return to sea. In total, 283 interventions were made in 2016, the majority by dedicated volunteers who invest hundreds of hours every season.

Contribute to the project

Marine Mammal Emergencies is currently looking for volunteers. The rate of renewal for former volunteers is over 90%, but every year the Network strives to ensure better coverage across its vast territory. Needs are greatest in areas where marine mammals are abundant and beaches are expansive, i.e. on the North Shore (especially far from large towns), in Chaleur Bay in the Gaspé, and along the Lower St. Lawrence River and the Magdalen Islands. Are you available and motivated? Then join the Marine Mammal Emergencies volunteer team and start contributing to the project this spring!

Collision off Les Bergeronnes: Lessons to be Learned?

Leave It or Learn

Live Stranded Dolphins: Story from an Anticosti Island Resident What Should Be Done If a Cetacean is Stranded Alive?

Why are St. Lawrence Researchers So Interested in Whale Carcasses? (in French)