An Extra Boost from the Tide 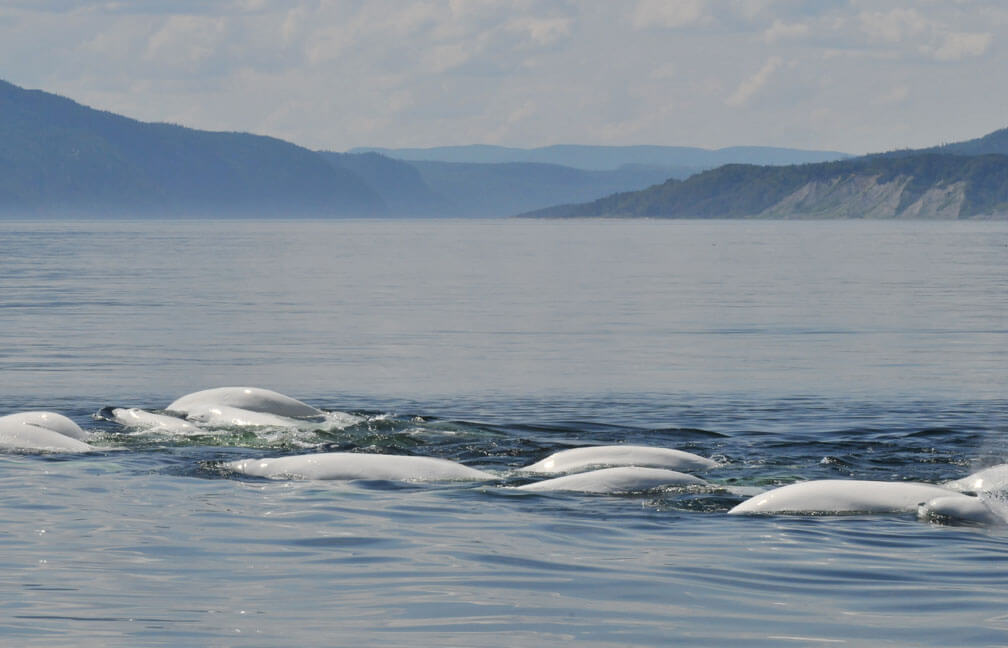 April 15: “I’m watching a herd of belugas entering the Saguenay right now,” remarks Renaud Pintiaux on the other end of the line. In Tadoussac, a number of residents have also noted belugas today! At sunrise, GREMM’s “early bird” employees are even able to admire them from the dunes. The white backs stand out on the water surface… spring has arrived!

In Quebec’s Charlevoix region, at Anse-au-Sac in Saint-Irénée, one observer spots a few of these white whales on April 8 during the incoming tide. “It was like a ballet! In total, there were about twenty, separated into small groups, some on the left, others on the right. We could see the division of the waters, which they seemed to be following,” she remarks.

As it turns out, there’s an explanation for this observation: belugas are not fast swimmers. They typically cruise along at speeds of 2-4 km/hour, although they can sometimes sprint at up to 20 km/hour! Indeed, belugas may try to take advantage of the current of a rising tide. The strong currents can give them an extra boost and thereby allow them to exert less physical effort and hence less energy. This explains why belugas are more often encountered at the entrance to the Saguenay during changes of the tide. However, this is by no means a guarantee that one will observe them.

Tides can also influence the observation of other species such as the minke whale. Changes in current sometimes cause prey to congregate, which attracts minke whales to come and feed in the tide rips.

Additionally, a minke whale was also observed on April 15 off the coast of Sept-Îles. “When I see black scoters, I know that minke whales are not far behind,” comments Jacques Gélineau. Once again this year, the arrival of the two migrants seemed to coincide. In the same region, more precisely near the mouth of the Moisie River, Jacques observes a blue whale through his binoculars. He begins to daydream about summers out at sea, where he notably collects data for the Mingan Island Cetacean Study.

It is rather unusual to see a beluga swimming alone, and all the more so in Chaleur Bay in the Gaspé! Two local residents who were out hunting reported observing this beluga off Saint-Siméon-de-Bonaventure. It was surrounded by seals, which were also enjoying a feast below the surface. Belugas are not usually found in this area. If you happen to see this individual again, the Quebec Marine Mammal Emergency Response Network would request that you contact them at 1-877-722-5346.