Why do seals come out of the water? 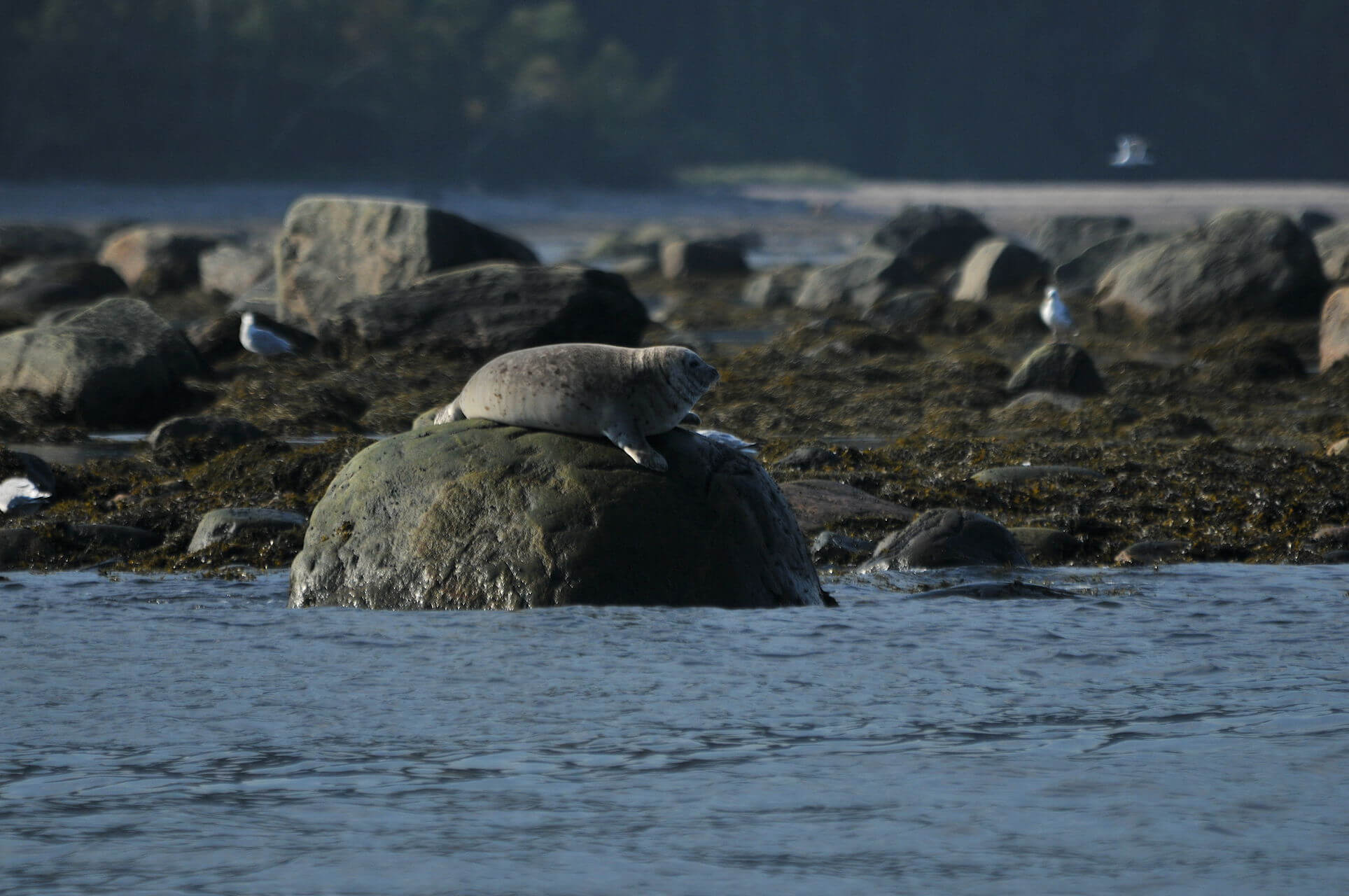 Seals and sea lions share an ancestor that was exclusively terrestrial. Their physiological evolution has left traces and they must return to land for some of their activities. Amphibious in nature, seals split their life cycle between land and sea. Some species such as hooded seals return to land only for calving and moulting. The rest of their time they spend at sea, feeding and migrating between their breeding and feeding areas.

Other species, such as harbour seals, are more sedentary and readily come onto land on a regular basis. Generally faithful to a specific haulout site, they can be found in a variety of environments: near lakes, rivers, islands, beaches, sand or gravel shoals, the shores of islands and even near man-made structures. They are mainly looking for a place free of disturbances and with easy access to water in the event of predation. In the St. Lawrence Estuary, known haulout sites are found near Batture aux Alouettes, on Île Blanche and Île aux Fraises, as well as other islands on the south shore, near Le Bic. In the Saguenay Fjord, there are haulout sites near Cap Éternité and Cap Fraternité.

Why do seals come out of the water? The explanations behind this behaviour vary throughout the year, over time and even from one seal population to another. In the Estuary and the Gulf of St. Lawrence, the harbour seal is a permanent (year-round) resident. Some people are sometimes lucky enough to see them out of the water, lying on the rocks in the so-called “banana” position, i.e. with their hind legs and head raised in the air.

In calving season, given the very low water temperatures typically observed, it is safer and more viable for pups to be born on dry land, since they have not yet developed an adequate layer of fat. In the St. Lawrence, pupping season extends from mid-May to mid-June.

From July to mid-September, harbour seals in the St. Lawrence moult and shed their hairs to make room for new ones. This phenomenon is very energy-intensive, if only for the lower rates of metabolism attributable to the hormonal imbalances associated with this moult. For this reason, individuals require a quiet place to rest. Additionally, since the water is generally colder than the ambient air, being out of the water allows for better blood circulation, which facilitates and accelerates hair growth.

Outside the moulting and calving periods, it is not uncommon to see harbour seals out of the water. Tidal and weather conditions are known to influence the number of harbour seals that come onto land. Greater numbers of seals can generally be observed out of the water at low tide. In warmer and dryer conditions with no precipitation and light or no wind, seals will tend to come aground for longer periods and in larger numbers. In any case, if a seal decides to come out of the water, it is because it is in its best interest to do so.

Interesting factoid: if you are lucky enough to observe a harbour seal haulout, you will notice that, with the exception of mother-pup pairs, individuals systematically avoid physical contact between themselves. However, they remain in a group, as this helps ensure a better state of alertness in case of disturbance or the presence of a predator.