Which whale species has the largest testicles? 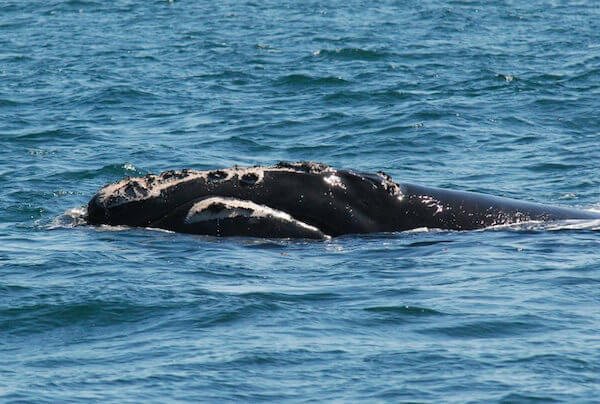 North Atlantic right whales have the largest testicles in the animal kingdom. They can exceed 900 kg, which corresponds to about 2% of the animal’s total weight. Harbour porpoises have nothing to be ashamed of either: during the mating season, the testicles of males swell to represent 5% of their body weight. But how is having large testicles an advantage for male right whales? Why did evolution favour this characteristic?

To understand the usefulness of this adaptation, it should be pointed out that female whales can successively mate with different males. To ensure their genes are passed on, it is in males’ best interest to produce great quantities of sperm to “dilute” or even flush away the sperm of other males. In this world of competing sperm, it’s the law of probability that likely decides who the father will be! Males that are the most well-endowed – and therefore produce the most sperm – probably have greater reproductive success. Having larger-than-average testicles is a trait that is then passed on to their offspring and selected by evolution.

Sperm competition is a common strategy in the animal world, and North Atlantic right whales are the perfect example. Why did they adapt disproportionately compared to other species that engage in sperm competition? The answer likely lies mainly in the aquatic environment. In fact, since whales can move in three dimensions and the environment is generally devoid of physical barriers, a male cannot restrict the access of other males to a female, a strategy that is rather common in land animals. Some marine mammals have developed behavioural strategies to stand out from their peers during the breeding season, such as sperm whales that engage in sparring to establish their dominance over other males. However, this is not the case for North Atlantic right whales, which do not seem to be organized hierarchically. Having no other means to compete, they put “all their eggs in one basket” by pushing sperm competition to the extreme.

A counter-productive adaptation for the species

Studies have determined that sperm competition benefits the oldest males in this population. It is estimated that males are capable of breeding at 8 years of age, but, more often than not, fatherhood occurs from the age of 15 upward. One of the hypotheses put forward is that the development of the testes – in both size and productivity – might continue even after a whale has reached its adult size. This advantage for older males greatly reduces the number of individuals that can reproduce, which is detrimental to the species from a conservation standpoint. It is often the same males that reproduce successfully from one year to the next, thereby reducing the “gene pool”. In other words, genes carried by individuals unable to reproduce will not be passed on to future generations. As a result, the genetic makeup of the population is uniform, which is often the case for small populations. Poor genetic diversity can prevent a species from adapting to change, favour the spread of harmful mutations within the species, and even be detrimental to reproduction due to inbreeding. Once again, nature reminds us of the importance of diversity for the survival of species.

For more information on whale reproduction