What Do Whales Do at Night? 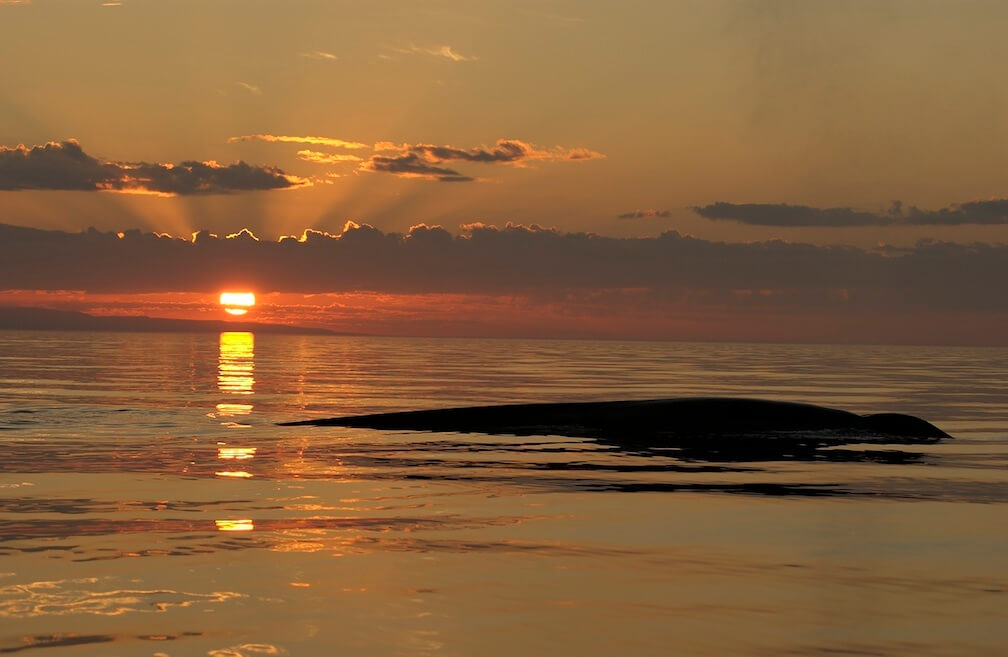 A curtain closes, night takes over the sky and during its quiet advance the frantic pace of the cities tapers off. But what happens in the St. Lawrence when darkness arrives? What do whales do during the night?

A team from the Group for Research and Education on Marine Mammals (GREMM) studied the diurnal and nocturnal behaviour of fin whales in the St. Lawrence Estuary. To carry out such studies, scientists placed tags on the animals to determine their movements as well as the duration and depth of their dives. These tags can remain on the cetaceans for a few hours, allowing researchers to obtain data during the animals’ nocturnal activities. It appears that fin whales are more active at the surface at night and, if they do dive, their dives are brief and shallow. This behaviour seems to be consistent with that of their prey. These whales are believed to mainly feed on krill and small fish – including capelin – that migrate vertically when darkness arrives. In other words, they rise from the deep waters, where they spend the day, toward the surface of the St. Lawrence.

Knowing that the main activity of whales in the St. Lawrence is feeding and knowing how their prey behave, we can thus assume that whales remain at the surface to feed. But these mammals may have other activities that we unfortunately cannot witness, as tracking marine animals at night represents a formidable technological challenge.

In a more recent study of North Atlantic right whales in Massachusetts’ Cape Cod Bay, the research team used a thermal sensor. The fact that whales’ blows are warmer than the outside air allows the animals to be detected and tracked. Like fin whales, right whales appear to spend the night feeding at the surface. Their prey, copepods (small crustaceans), also rise to the surface when darkness arrives.

But why is it so important to know what whales do at night? Isn’t it an enigma that we could leave to them? In order to protect these animals from our commercial activities at sea (shipping, fishing), it is essential to understand their behaviour and the areas they frequent in order to know in what types of situations they might be more vulnerable. New technologies can also be explored with the objective of equipping boats so that they can detect these ocean giants at night and thereby avoid collisions.

And what about sleep in all of this?  It seems that cetaceans have several phases of sleep (at least ten, with each one probably lasting less than an hour) per day. This type of sleep is “unihemispheric”, which means they only rest half their brain. Cetaceans studied in captivity showed sleep phases mainly at night, which in all likelihood is attributable to the rhythm imposed by their human caretakers, who stimulate them and feed them during the day. In their natural environment, these animals certainly enjoy quiet time to rest, whether it is daytime or night-time, and this behaviour is known as “logging”.