What do we know about harbour porpoises? 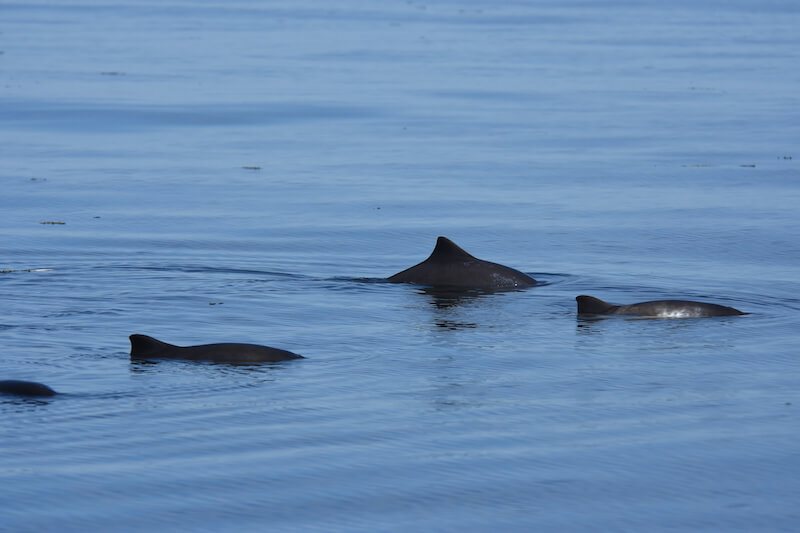 Harbour porpoises are the subject of very few studies in the St. Lawrence and are therefore much less known than some other whales. So, let’s give them the credit they deserve with what makes them special and what we know about them!

Rather discrete, porpoises are the smallest toothed whales in the St. Lawrence: they measure between 1.3 and 2 metres long, though generally less than 1.8 metres, making them comparable to humans in size. On the other hand, female porpoises are believed to be slightly longer than their male counterparts. These whales are also famous for the noise they make when they breath! This has earned them their French name marsouin, which comes from the Swedish or Danish marsvinor Dutch meerswijnand means “sea pig”. These cetaceans are part of the family Phocoenidae and not Delphinidae. Compared to dolphins, their snout is much more rounded and their teeth are spatula-shaped.

Most of the time, what we see of them is their dark, triangular-shaped dorsal fin. Porpoises also on occasion jump in the waves, showing their heads and parts of their bodies. This fast swimming technique used by porpoises (and other small cetaceans) allows them to save energy. Incidentally, this type of swimming is nicknamed “porpoising” in reference to these animals.

Their speed is not just limited to swimming, but also to their life in general! In fact, at no more than 20 years, porpoises have the shortest life expectancy of any of the whales in the St. Lawrence. Thus there is one motivation that predominates for both sexes: to reproduce! For males, the strategy consists of competition by means of sperm. Their goal: to produce more sperm in order to inseminate several females or the same female multiple times. So in this sense they are well equipped! During the breeding season, the testicles of a bull porpoise can represent 4 to 7% of its body weight: a 45 kg porpoise can have testicles weighing 3 kg (and a 75 kg animal… 5 kg)! Additionally, proportional to their size – which, as you might recall, is comparable to the height of a human – males have a penis that measures about 50 cm long! Females can give birth every year. They are among the few cetaceans that can nurse one calf while being pregnant with another! Further, births occur in spring and summer, making them one of just two cetacean species (the other being the beluga) that calve in the St. Lawrence. 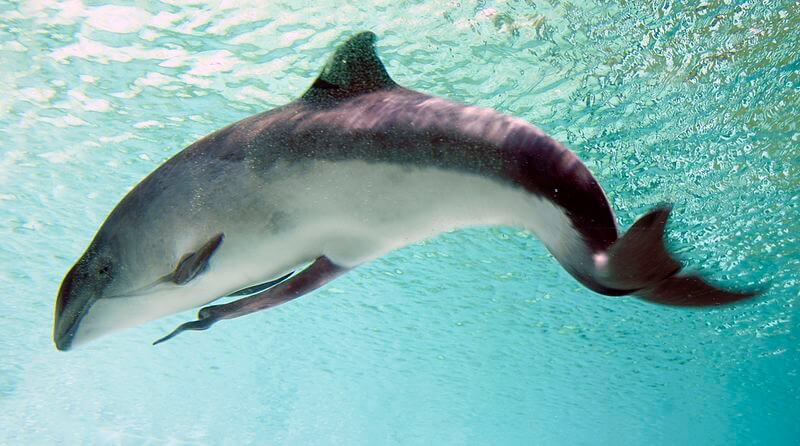 Males have a penis that measures about 50 cm long! © Sytske Dijksen

Plagued by a number of issues

On at least two occasions – most recently last year –a white porpoise was seen in the Estuary! This is surprising, as they are usually dark in colour. These white porpoises are probably affected by albinism or leucism, which can also be observed in other cetaceans. These two diseases affect the pigmentation of the skin, either by a lack of production or the underproduction of the pigment melanin.

Porpoises can get caught in fishing nets and drown, which is one of the causes of mortality in these whales. Can they also fall prey to grey seals? A study conducted in the North Sea has shown that grey seals are the source of bite marks on porpoises, but nothing has yet been proven for the St. Lawrence.