The whales were stranded in marshy terrain near Listuguj. © RQUMM

On Thursday, September 30, the Quebec Marine Mammal Emergency Response Network (QMMERN) receives a report of two whales stranded alive in the Gaspé Peninsula town of Listuguj. Over the phone, the police indicate the exact location of the cetaceans, which are in the Restigouche area. The two whales were first pushed back into the water by the police and local citizens. They then returned to the sea and the police quickly lost sight of them. End of story? Not exactly. After carefully studying videos and photos taken by the police, QMMERN agents and the specialists consulted identify the cetaceans as northern bottlenose whales, an endangered species.

The QMMERN therefore decides to dispatch its mobile team to the site to monitor the area, as the two animals could run aground again. They also notify fishery officers in the area. Then, because Restigouche lies on the border between Quebec and New Brunswick, the QMMERN informs its counterpart responsible for the Maritimes, the Marine Animal Response Society (MARS). In cases that involve live strandings – which often entail complex logistics – the QMMERN generally works in collaboration with Fisheries and Oceans Canada as well as specialists such as veterinarians from CQSAS and MARS.

At around 3:30 in the afternoon, while en route to Chaleur Bay, the mobile team receives another call from police officers in Listuguj: The whales had beached themselves again at low tide in roughly the same place. Once on site, the specialists assess the situation, namely with the help of a drone. The whales are indeed stranded, which means their bellies are touching the ground. However, they are far from shore, in a marshy area accessible only by rowboat.

One individual dead, the other in bad shape

Thanks to a local resident who knows the area well, the team approaches the animals by boat. Unfortunately, the crew can only see that one of the animals is already dead and that the other’s vital signs are critical. The whale that is still alive is emaciated; it keeps its blowhole open and produces a squeaking sound when it breaths.

As the light fades and evening falls, the teams on site take stock of the situation. A beaked whale measures about 6 m long and can weigh up to 3 tonnes. In order to even attempt a release of a live animal, one needs to have the right equipment and several teams. Such an operation poses a real danger to both the animals and to humans.  The expert teams from QMMERN, MARS and Fisheries and Oceans Canada therefore convene the next morning to attempt a release and perform a necropsy on the dead whale.

The next day, however, the mobilized teams realize that the individual that was still alive is no longer there. It seems to have moved during the high tide. While fishery officers set out in search of this animal, the QMMERN and MARS teams prepare to perform a necropsy on the carcass. The beaked whale is thus transported to the site of the necropsy, where a short ceremony is performed by the Mi’gmaq community of Listuguj before the first cut of the scalpel.

Numerous samples are taken over the course of the 5-hour operation. The bones are then collected by the Group for Research and Education on Marine Mammals (GREMM). Ultimately, the skeleton will join the collection of whale skeletons on display at the CIMM and will play a role in the education and awareness of the general public with regard to cetaceans. 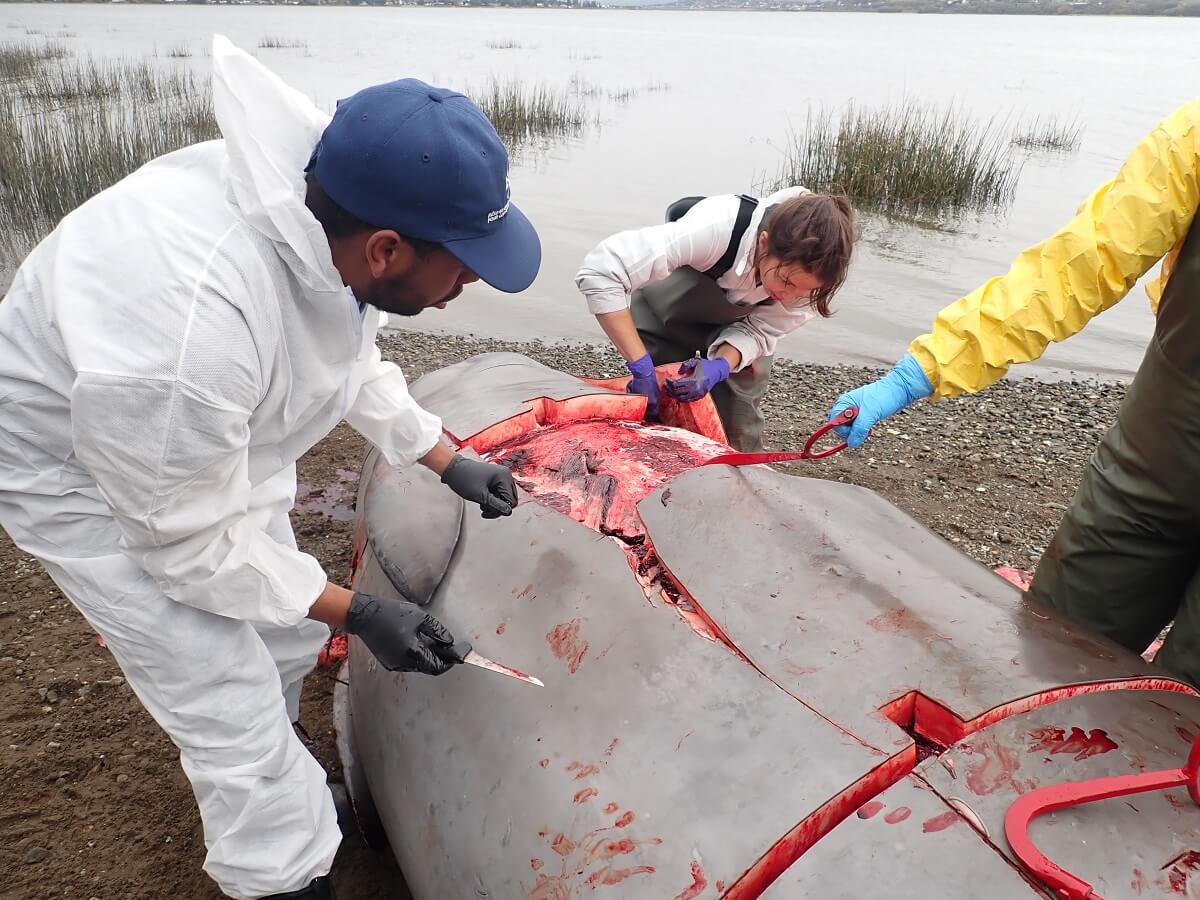 A long necropsy took place to try and determine the reason behind the whale's death. © RQUMM

The necropsy did not reveal any information about the animal’s health; we will have to wait for the results of more detailed analyses of the collected samples to find out more. These analyses will take place over the winter.

As for the individual that was still alive at the time of the stranding, we have not received any new reports. Despite an overflight of the area using a drone, the whale was not located. Being mammals, whales can sometimes survive for a rather long time out of water.

It is difficult to know for sure why these individuals ventured so deep into Chaleur Bay. Whales can run aground for any number of reasons: illness, injury, or even a navigational error. In this specific case, the riddle has not yet been solved.

A witness who finds a whale in this state may observe the animal from a distance, but should definitely not intervene him- or herself. These are large wild animals whose behaviour can be unpredictable, especially in this type of situation. Manipulations increase stress in the animal and reduce its chances of survival. The first thing to do is to contact Marine Mammal Emergencies at 1-877-722-5346. A member of the Network can then guide you and put the necessary measures into place. 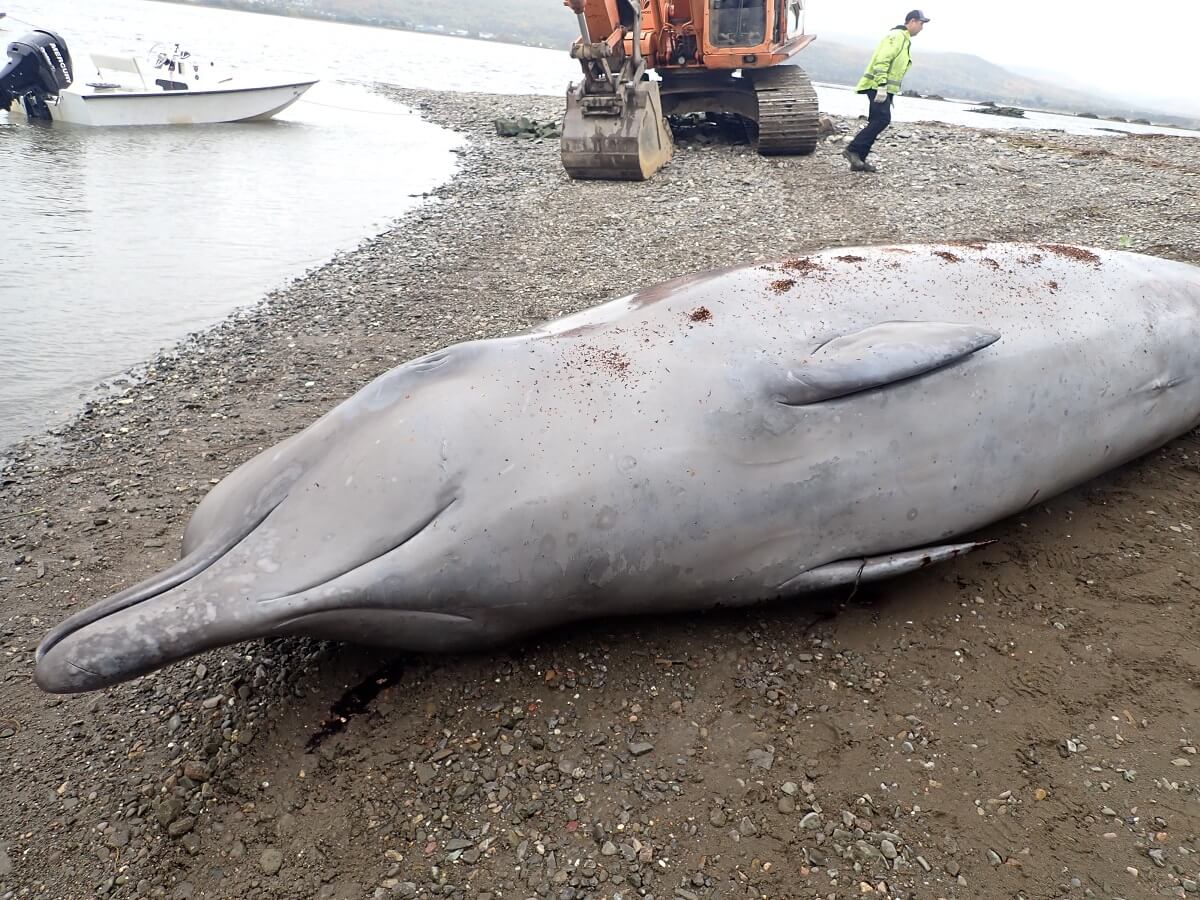 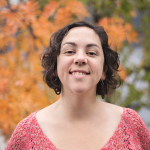 Mélissa Tremblay has been working at GREMM since 2012. She started as a naturalist at the Centre of Interpretation on Marine Mammals, and her interest in science led her to become a research assistant for GREMM and a respondent at the Marine Mammals Emergencies Call Centre. Since May 2018, she has been in charge of the Call Centre.