As Quebec slowly gets deeper into autumn, foliage reaches its peak and the wind gusts and rain grow more intense, boat owners are gradually taking their craft out of the water and fewer and fewer observers are venturing out to sea. The whales are still here… but for how much longer?

In the St. Lawrence Estuary, the few whale-watching boats that continue to operate are being rewarded with numerous sightings. Off the coasts of Les Escoumins and Les Bergeronnes, there are still seven to ten fin whales, including “Ti-Croche”, and five humpbacks, including H930, H944, H943 and H918. “These are the die-hards, the last ones to linger out of the approximately 25 humpbacks that came to visit us this season,” writes photographer Renaud Pintiaux.

We expect that they will soon make their way to the islands… But which ones? For example, it is known that H930 was observed last winter off the coast of Guadeloupe, while most St. Lawrence humpbacks spend the colder months in Dominican waters. Will it follow its summer companions, or will it choose to return to the French Caribbean?

The North Atlantic right whale “Wolf” has not been seen in the area since Monday, October 5. After 11 days exploring the waters of the Saguenay-St. Lawrence Marine Park and having her photo taken from every angle like a rock star, she seems to have found her way home. During the most recent reported sighting, it was heading east-northeast at a brisk pace, diving for just a few minutes at a time and vigorously slapping its pectorals fins on the surface. We hope to hear from her again soon!

North Atlantic right whales are the focus of very rigorous scientific monitoring along the US coasts. Consequently, we know that Wolf is accustomed to basking in the Florida or Georgia sun during the winter months. Will she be back to visit us next year? 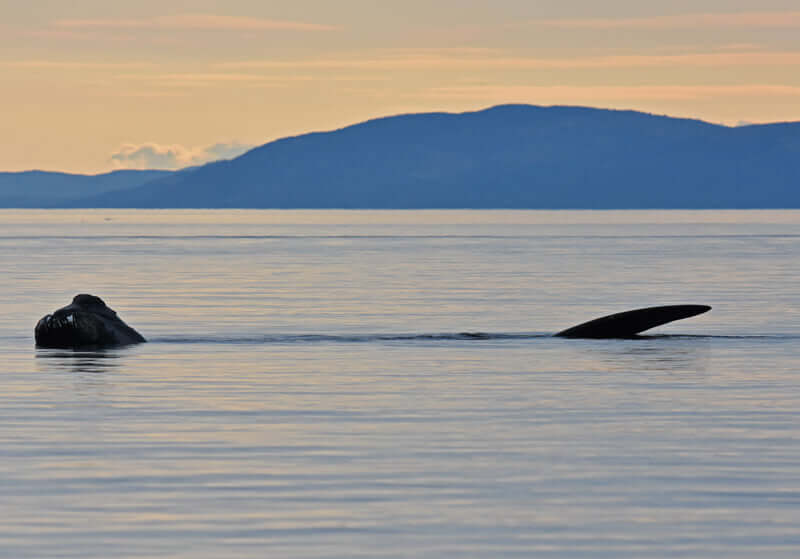 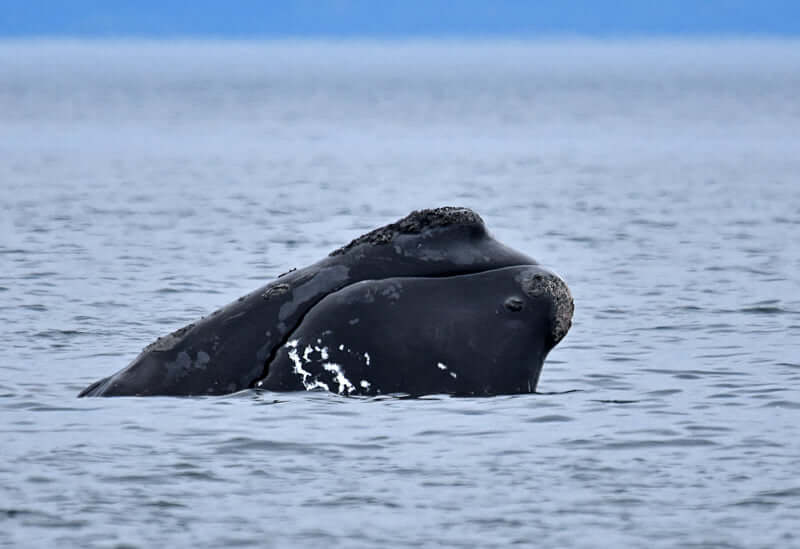 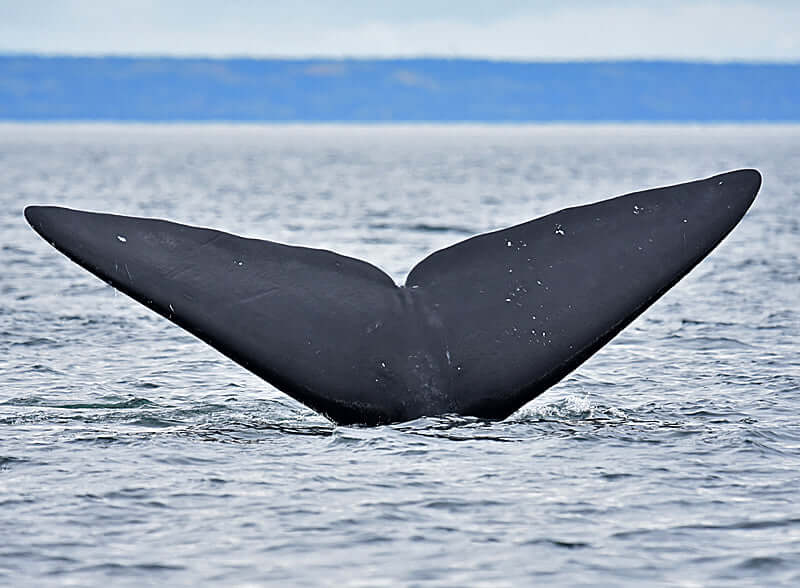 On October 6, two fin whales pass a few nautical miles off Portneuf-sur-Mer and Forestville, en route toward the Gulf. For Mériscope researcher Dany Zbinden, this is a sign: “In summer, we rarely see them in the area, but in the fall, it is common to see them pass through.” Fin whales’ migratory habits remain very mysterious and are being studied by researchers. By placing satellite tags on a few individuals, we hope to learn more about the species’ migratory routes.

From the dunes of Tadoussac, Jessé Roy-Drainville of the Tadoussac Bird Observatory has also been spotting large blasts of passing fin whales. But on land, it is the birds that suggest that winter is right around the corner. “We had a large movement of pine grosbeaks and common redpolls, as well as two golden eagles this past Thursday. It’s a bit concerning, as golden eagles typically pass through much later.” Will winter come early this year?

Belugas are found in the St. Lawrence year round. Even if they only make a short migration between the Estuary and the Gulf, their movements are nevertheless a reflection of the change of seasons. On October 4 off Cap de Bon-Désir, three kayakers were taken aback by a veritable tide of belugas, “easily one hundred belugas swimming upstream from Les Escoumins toward Tadoussac.”

The St. Lawrence narwal was spotted during a photo-identification session © GREMM

GREMM researcher Timothée Perrero confirms: “In fall, belugas tend to form large herds. This time of year, when you go out for photo ID work, you can find yourself amidst large gatherings. Sometimes, we see white backs emerging all around the boat, and as far as the eye can see!”

Out in Sept-Îles, Jacques Gélineau recently tallied seven or eight blue whales and nearly a dozen fin whales. “It’s a great year for blues! he exclaims. I’m truly having an exceptional season. Currently, I’m mostly seeing the same individuals again and again. Pairs are continually forming and disbanding. The animals begin to congregate. As the plankton is just 30 or 40 m deep, dives exceed no more than 10 minutes, which facilitates observations. A sort of bonus as the days grow shorter.”

In anticipation of their migration, it is critical that blue whales build up their fat reserves. To do so, they can engulf up to four tonnes of krill a day. Time’s a-wasting; gotta eat! Above this feast, it is the migrating parasitic jaegers that delight Jacques and announce the end of the summer.

InGaspé Bay, locals are reporting a remarkable absence of blue whales this fall, though a handful of humpbacks have been putting on a show. Observers are thrilled to recognize among them long-time regulars such as Leprechaun,, Minkichote – who showed up with her calf this year! – or Splish, which was one of the first whales identified by the Mingan Island Cetacean Study (MICS) in 1980.

The bay also attracts white-sided dolphins, porpoises, three or four fin whales and good numbers of minke whales. “Sometimes we have ten, fifteen or twenty minke whales around the boat. A sight to behold!” 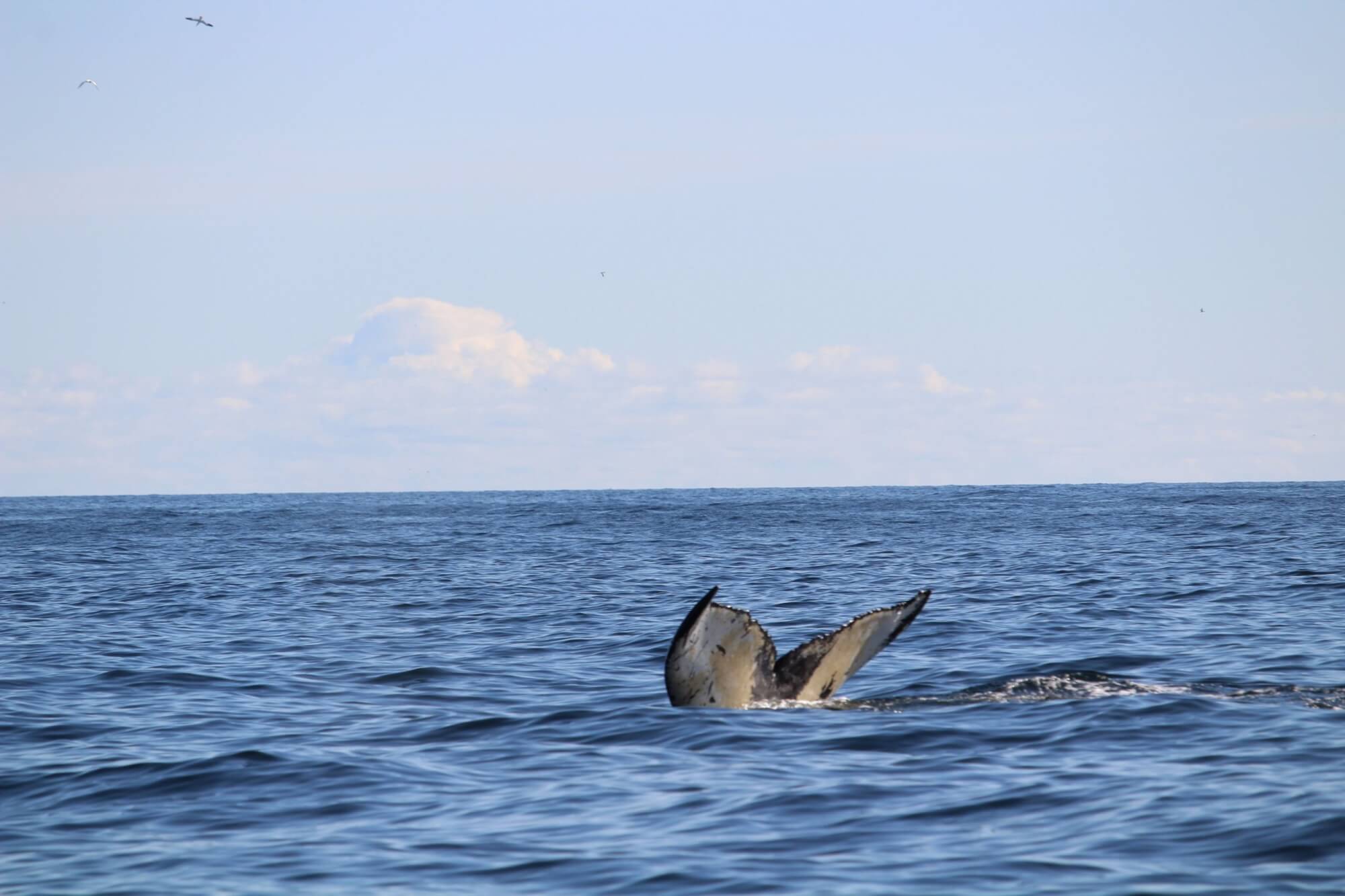 Small in size, big in numbers

The minke whale is the only species recorded by our observers on the west side of the Gaspé. “Despite two long trips out to sea, nothing… except for two minke whales as we were leaving the Matane marina,” points out a regular. “Not even a seal or a porpoise!” Same story for René Roy, who was also out at sea between Matane and Les Méchins: “I’ve been a bit discouraged in my area,” he exclaims. “Usually it’s a very good area for blues, but they’re not here this year. The only thing I saw was minke whales.”

But while observers often seek the rarity of a right whale, the mobility of a pod of humpbacks, or the immensity of a blue whale, others get a kick out of these minke whales that approach the coast and allow for easy viewing from land.

“Several minke whales approached the Baie-Comeau wharf this week,” relates one observer. I went to sit there on Sunday morning and a minke whale came to feed for an hour, pinning sand lance against the wall of the docks. It was magical!” Another whale lover is moved by a little black back she observed “travelling” between Havre-Saint-Pierre and Grosse île au Marteau. In Baie-des-Sables, minke whales pay regular visits to one observer: “Last Thursday, its fin was barely visible in the rough seas. Yesterday, the calmer waters allowed me to hear its blow and catch sight of it. And again this morning, a minke whale came by to say hello,” he says with a smile.

“In terms of migration, the minke whale is the most unpredictable of all of them,” points out Dany Zbinden. We know there is very pronounced sexual segregation and that the individuals present in the Estuary are almost exclusively mature females. We also know that there are several subpopulations that move around in different ways.”

“Our” minke whales are said to belong to the so-called East Canadian Stock and, according to an acoustic tracking study, migrate down to the southeastern tip of the United States and the Caribbean for the winter. However, migration data remain very incomplete. When it comes to whales, there are still many unanswered questions! 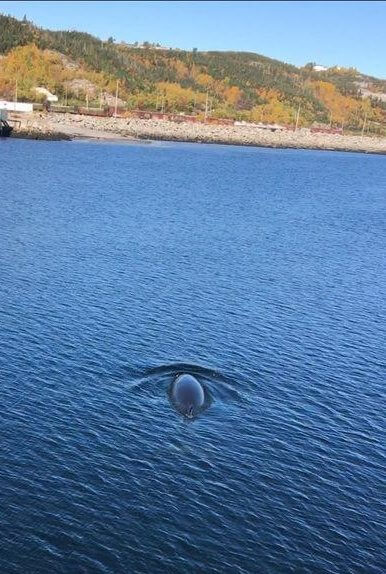