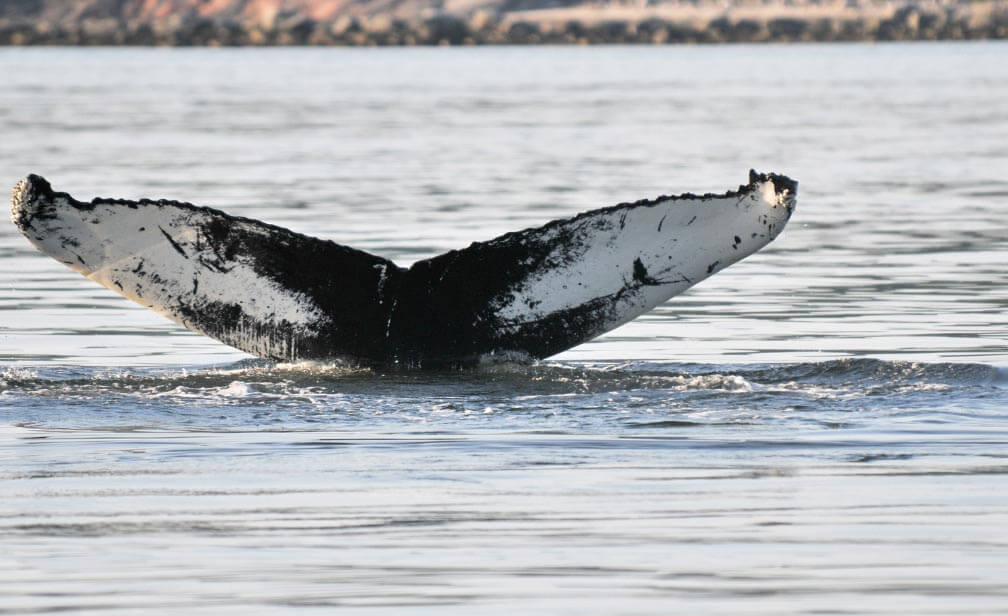 Irisept, also nicknamed Cocotte, is a female who mostly frequents the Gulf of St. Lawrence. She was first observed in 1997. She has been seen a few times in the Saguenay-St. Lawrence Marine Park. She is recognizable by the black-and-white colour pattern on the underside of her tail. On her right lobe, there is a black iris-shaped spot and in the centre of her tail, a small white number 7, hence her name: Irisept. Her nickname Cocotte stems from a marking on her right flank that resembles a pine cone. She is also recognized by her truncated dorsal fin and the conspicuous vertebrae near her peduncle.

Irisept is not currently in the Estuary. She is in the Gaspé where the humpbacks Siam, Gaspar and Whip are also being observed.

Graph deducted from telemetric monitoring of Irisept in 2012. Earlier, in June, Irisept was noticed in the Gaspé by the Fisheries and Oceans Canada (DFO)-GREMM research team which was undertaking a project on krill production and consumption of krill by whales in the Gulf of St. Lawrence. This mission was carried out from June 18 to 30. The team attempted to place a radio tag on Irisept’s back to monitor her underwater movements, but they have not been successful.

In the Estuary, the DFO, in collaboration with the GREMM, kicked off this week the 4th year of the large rorqual monitoring project. This project aims to document the whales’ underwater activity as well as their diet in the Marine Park. In parallel to the telemetric monitoring, the Parks Canada team is attempting to determine the identity and concentration of prey in the water column with the help of an echo sounder. In 2012, Irisept was one of the whales tracked by the DFO-GREMM team. At the time they monitored the giant feeding at depths of 15 to 20 metros.

Irisept is a humpback with a penchant for the Gulf, having been photographed since 1997 sometimes in the Gaspé, sometimes in the Mingan or Sept-Îles sectors. In the Marine Park, she was seen in 2003 and 2004 and then again 2012, and here she is back again. She’s moved around considerably this summer: photographed by MICS in Gaspé in early May, she arrived in the Estuary in late June, only to quickly disappear before showing up again on August 17!

Her official name, given by MICS (which manages the catalogue of St. Lawrence humpbacks), refers to certain details of the black and white colour pattern on the underside of her tail: a black iris on her right fluke and a small, white number 7 near the middle. In the field, however, other characteristics are often used to recognize her: a seemingly truncated dorsal fin, clearly visible vertebrae around the peduncle area, and that funny-looking mark on her right flank reminiscent of a pine cone, hence her nickname “Cocotte”.

In 2012, she was one of the whales fitted with a telemetry tag as part of the pilot project carried out by the GREMM and Fisheries and Oceans Canada on rorqual feeding ecology in the Marine Park. On August 20, 2012, she was feeding at depths of 15 to 20 m, at a time when krill were noted to be present by the Parks Canada team. The project continues this year with five whales having been monitored to date in 2013.

The humpback whale is recovering well from 20th century overhunting, with populations believed to be increasing around the globe. Great news! Furthermore, many scientists believe that this is the reason for the growing presence of this species in the Marine Park.