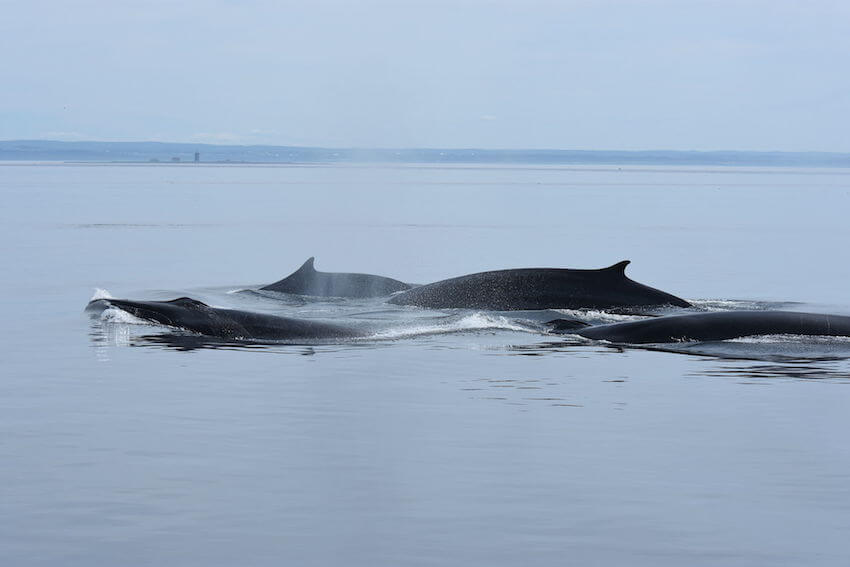 The number of observers on the water and on shore is on the upswing. However, some days, despite all their efforts, they come up completely empty-handed. But other times, the whales are there, both in numbers and diversity! Such are the vagaries of wildlife viewing.

Whale enthusiasts back on board

Since July 1, whale-watching cruises are once again authorized by Transport Canada. These companies have had to make adjustments to accommodate passengers in order to comply with new public health guidelines. Throughout Quebec, public turnout has been good, and cetacean turnout as well for that matter!

On July 6, in the Saguenay-St. Lawrence Marine Park, a trio of humpbacks are seen swimming together: Tic Tac Toe, her calf and H858. In 2017, H858 was photographed with its mother by the Mingan Island Cetacean Study. This whale was observed in the Marine Park in 2018 and in 2019. Will the young humpback become a regular in the Estuary?

Renaud Pintiaux photographs the three animals in close proximity to a freighter. Throughout their habitat, whales are forced to coexist with a variety of watercraft: recreational craft, whale-watching boats, research boats, cargo ships, bulk carriers, tankers and other commercial vessels. 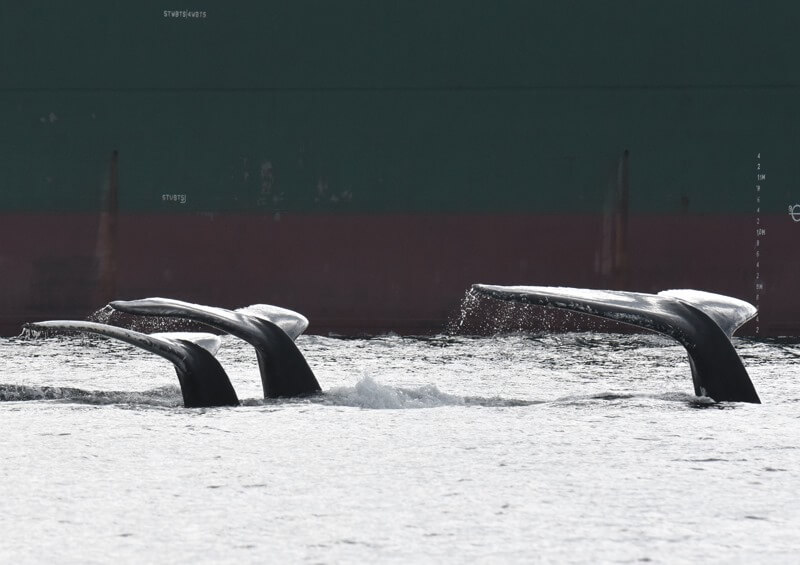 Tic Tac toe, her calf and H858 dive in close proximity to a freighter. © Renaud Pintiaux

Depending on the type of craft, a number of measures exist to prevent collisions and disturbances. For recreational boaters, a free online training provides a better understanding of whale behaviour and the regulations in place to protect them. Whale-watching captains in the Saguenay-St. Lawrence Marine Park must undergo mandatory training and pass an exam before they are permitted to offer excursions. With regard to freighters, various initiatives and measures exist. This will be further discussed in the coming weeks in a comprehensive article on the topic.

Scores of minke whales are also being photographed during cruises. Some of them show clearly truncated dorsal fins, evidence that life underwater is not always easy.

In Gaspé Bay in the Gaspésie, whale-watching passengers enjoy the presence of minke whales, humpbacks (including a mother and a calf), fin whales (up to 6 at the same time) and even a blue whale! 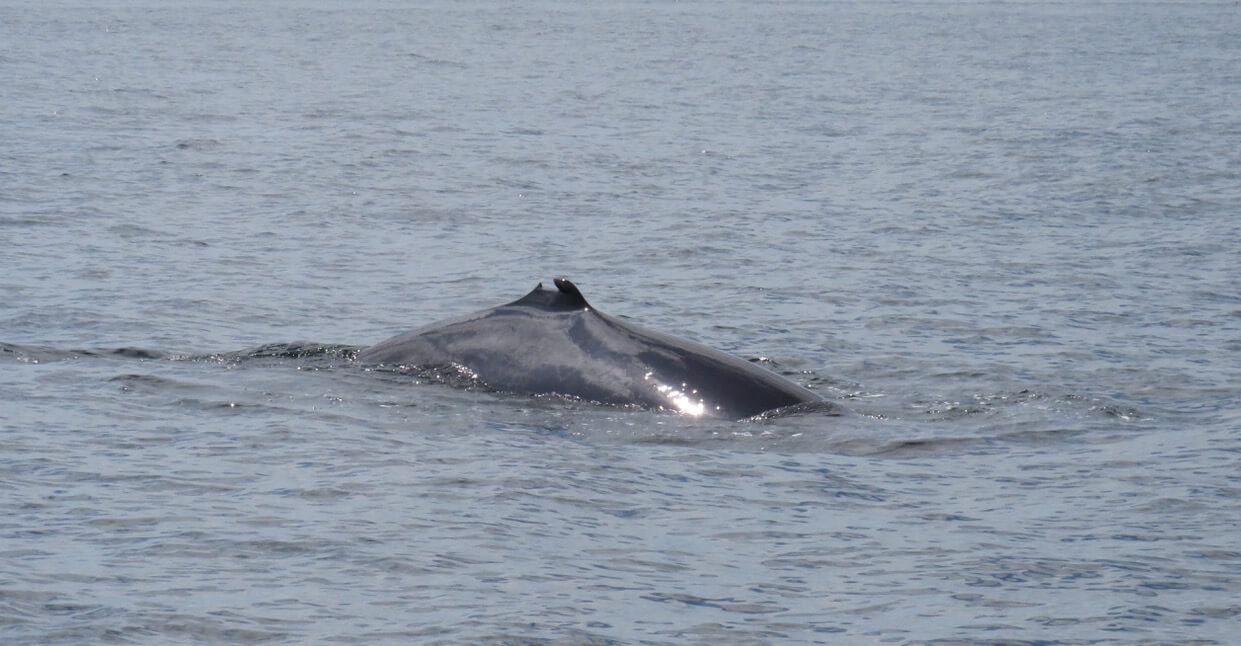 Not a whale, but a shark!

July 2: A large triangular dorsal fin perched atop a black back surprises a fisherman in Saint-Siméon, in the Gaspé Peninsula. Is it a whale? No, it’s a basking shark! The second largest fish in the world, the basking shark’s range extends into the Gulf of St. Lawrence. Similar in size to a minke whale (7 to 9 metres), the basking shark feeds on zooplankton, which it gobbles down with its mouth wide open and filters through its gill rakers. Its favourite prey is believed to be the same as that of the North Atlantic right whale: copepods.

Belugas from Charlevoix to Bic Island

Yes, you can see belugas in the Lower St. Lawrence, and not just from the docks in Rivière-du-Loup or in Cacouna. Observers passing through the Bic Island region are surprised to encounter these white whales. Although this area is outside the beluga’s critical summer habitat, it does lie within the species’ range throughout the course of the year.

Even if Tadoussac’s Marine Mammal Interpretation Centreis still closed (patience, it opens on July 26), belugas have been seen swimming nearby nearly daily. Some have even been swimming up the Saguenay as far as Baie Sainte-Marguerite.

In Saint-Irénée, belugas seem to punctuate the blue St. Lawrence less often than they did in spring. On occasion, however, they offer a delightful ballet to those who know how to keep their eyes on the sea. 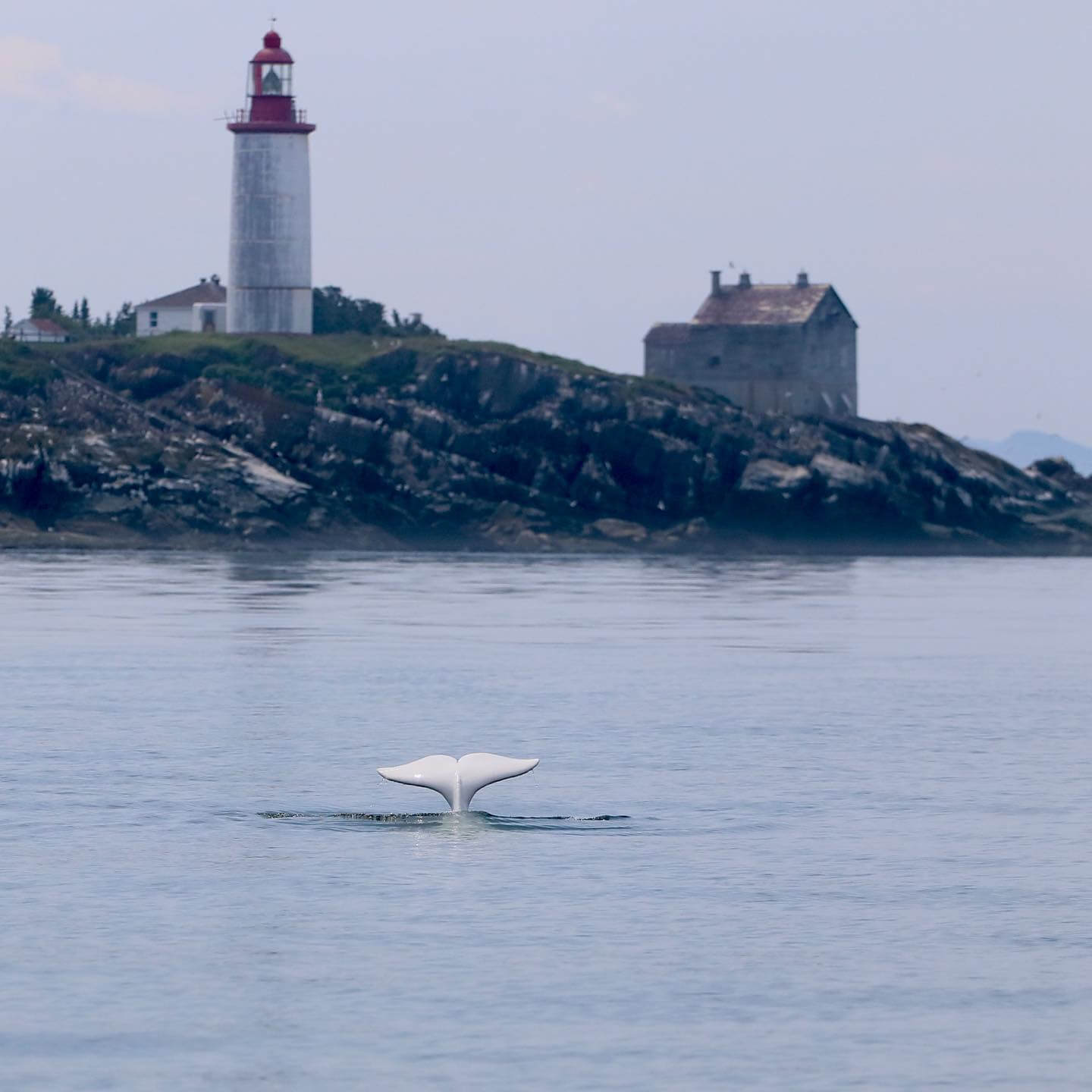 One species hidden by another

Whales don’t just have to live with humans; they must also coexist with other species. On July 3, an observer in Baie-des-Sables noted a passing minke whale, closely followed by a fin whale. Seeing them one after the other gives one an appreciation for the difference in size between the two species, which is more than 10 metres!

On July 6, three humpbacks swim in proximity to 80 belugas off the coast of Tadoussac. Nearby, 15 or so minke whales feed in a tide rip, while harp seals swim on their backs nearby.

Researchers in search of whales

Some areas seem to be quieter than others. Researcher Anik Boileau has noticed this near Sept-Îles. “In five days of trips out to sea, I encountered just two minke whales,” deplores the director of the Sept-Îles Research and Education Centre.

A collaborator from the Mingan Island Cetacean Study ventures out twice during the week to two different areas in a quest for fin whales. The first trip, he fails to spot a single cetacean. On the second outing, he observes a slew of seals, numerous porpoises, a few minke whales, a dozen or so belugas, but no large spouts. Which all goes to show that every outing is unique, every encounter with whales, a privilege, and every observation, a moment to cherish.