Silhouettes of All Colours 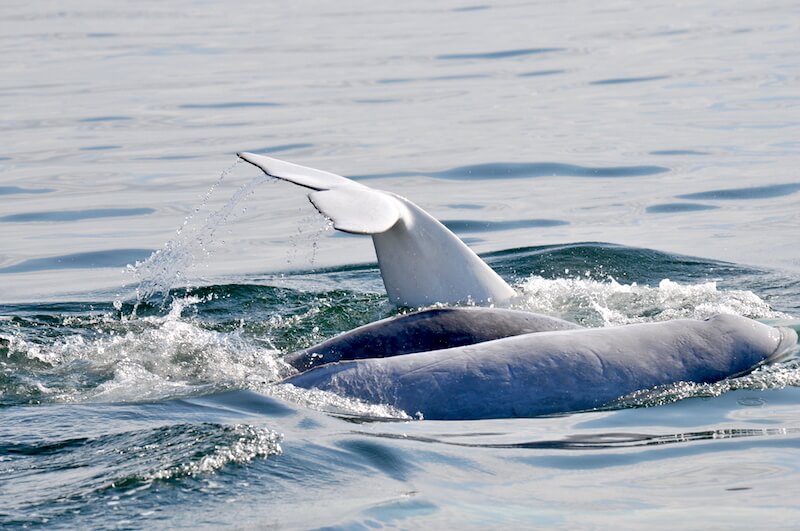 April 11: Young grays and white adults are scattered around the mouth of the Saguenay Fjord. “At last,” sighs one employee of the Group for Research and Education on Marine Mammals (GREMM) who spots these belugas. Very few were seen this past winter. The day before, nearly a dozen individuals were also spotted in Tadoussac Bay.

Crab harvesters in Fishing Area 17 have also been encountering herds of belugas off the coasts of Les Escoumins, Forestville and Le Bic. In spring, the territory frequented by these white whales (article in French) is believed to extend from Île aux Coudres to the Gaspé Peninsula.

Off the shores of Franquelin and Sept-Îles, it is the silhouettes of crab fishermen and seabirds rather than that of large rorquals that are seen. Our collaborator in Franquelin has been observing common eiders on a daily basis. These large sea ducks live in arctic and subarctic coastal marine areas. In the Estuary, they nest between Île-aux-Grues and Pointe-des-Monts. They are also abundant in certain archipelagos of the North Shore, particularly between Pointe-des-Monts and Blanc-Sablon. In Sept-Îles, scoters have been arriving in increasingly greater numbers.

“Gaspé Bay is finally free of ice,” mentions a resident of Cap-aux-Os. Will the whales venture closer to shore? Already, two humpbacks are seen on April 9 between Pointe-Saint-Pierre and L’Anse-à-Brillant. On the morning of April 12, four fin whales are spotted off Cap-des-Rosiers.

In Sainte-Anne-des-Monts, one observer witnesses a series of spouts that he describes as “ball-shaped and 1 to 2 m high”. On account of the rough seas, the back and tail go unnoticed. Maybe a humpback? Possibly, as the shape of the spouts observed resembles that of this species. One week earlier, three humpback whales had been seen a little farther downstream in Mont-Louis. However, one must be careful, as a number of factors influence the impression a whale’s spout can give. The wind can distort its shape, as can the light and the humidity in the air. The height of the blow also depends on what exactly the animal is doing. It will be less pronounced when the whale is resting or minimally active, or when its dives are short and close to the surface.