It’s snowing on the whales! 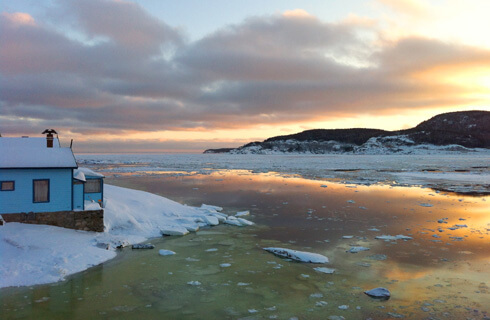 The most recent snowfalls this past week give the impression that winter will never end and that spring is reluctant to make its first appearance. This may be the case on dry land, but out at sea, the seasons follow their normal course…

Groups of belugas are being seen in their summer grounds, that is to say the St. Lawrence Estuary between Île aux Coudres, Forestville and Île du Bic, as well as in the Saguenay Fjord. One of the herds is observed near Rivière-du-Loup on March 31. On March 28, a herd of about a dozen animals is spotted off Cap de Bon-Désir in Les Bergeronnes. On April 1, an observer notices a beluga with a deformed profile in Les Escoumins. However, it is impossible to know who it is, as no photo was taken that might allow for an identification. The animal is 30 metres from shore and is accompanied by a small gray individual. Such hunchbacked belugas are well known to the Group for Research and Education on Marine Mammals (GREMM), notably Pascolio and Néo.

Large rorquals are also making an appearance early this spring. On April 3, at Cap-aux-Os, a colleague catches sight of a spout offshore. It is impossible to identify the species, as the wind scatters the giant’s exhalation so quickly that we are unable to make out any of the diagnostic characteristics. The same day, an employee from Fisheries and Oceans Canada observes three humpbacks from the docks in Mont-Louis. Also, a member of the Mingan Island Cetacean Study (MICS) team spots fin whales as she’s driving down Route 138 in Godbout.

Birds are also announcing the gradual return of more pleasant weather. Renaud Pintiaux, a Whales Online collaborator, describes the arrival of the first brant at Pointe de L’Islet in Tadoussac. Individuals of this species lack the white cheek of their cousin, the more familiar Canada goose. Adult brant are recognized by their inconspicuous white neck patch with black stripes. These birds are returning from the east coast of the US and migrating to the Arctic, where they will nest this summer.