Siam is the pioneer of humpback whales in the Estuary. © Aurélie Villeneuve

This week in the St. Lawrence was rich in sightings both magical and emotional: the return of Siam to the Estuary, the comings and goings of Tic Tac Toe, the discovery of a blue whale calf in the Mingan Archipelago. Every encounter with a cetacean is a unique experience, but some more than others.

On Monday, August 16, off the coast of Les Bergeronnes, a cruise ship approaches a group of three humpbacks. When it’s time to dive, they lift their tails into the air one by one, revealing unique black-and-white patterns that serve as genuine ID cards. A naturalist photographs the animals’ caudal fins and is puzzled. The last one is not familiar to her. Obviously, this is a new arrival in the Marine Park, and she seems to be accompanied by her calf. Fortunately, thanks to the decades-long work of scientists who have been documenting whales over the years, the identity of this animal is quickly revealed. This is Cédille, a humpback whale known in the Gulf of St. Lawrence since 1988! This is her 6th calf, making her a true matriarch. Astonishing fact: in 33 years, she had never been observed so far up the Estuary, generally tending to prefer the waters of the Gulf.

The next day, another cruise ship also approached a group of three humpbacks, this time off the coast of Les Escoumins. The naturalist on board enthusiastically spots a local celebrity, the enormous Tic Tac Toe, still accompanied by her calf. This whale has been seen on several occasions, sometimes in the Saguenay-St. Lawrence Marine Park, sometimes off Godbout, but seems to be highly mobile, disappearing from observation areas for weeks at a time. Surprise: her current escort is Siam! This male humpback was first photographed in the waters of Tadoussac in 1981. At the time, he was the only humpback to venture into the Estuary, a feeding ground generally more favoured by fin and blue whales. For captains, meeting these two mythical individuals interacting is both exciting and moving. 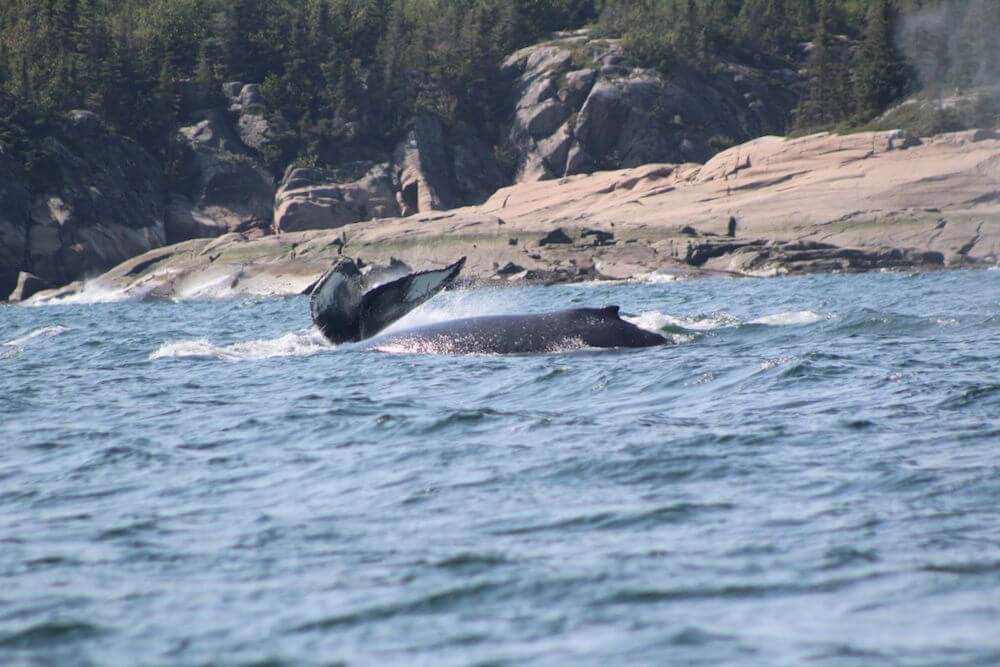 Two of the most popular humpbacks swimming together. © Aurélie Villeneuve

The final significant encounter of the week in the Marine Park is this report of blue whales five nautical miles off Les Escoumins: “Two blues, one of which is showing its tail,” points out one observer. They’re swimming a kilometre and a half apart and diving for 10 or 12 minutes at a time.” We can therefore officially announce the start of the blue season in the Estuary!

On Monday, hundreds of kilometres away, the MICS team is plying the St. Lawrence between Longue-Pointe-de-Mingan and Anticosti Island when it comes face to face with two giants… one of which is much smaller than the other! This is the blue whale B540, accompanied by a first-year calf. What a joy it is to witness a birth in this extremely vulnerable species! The team also encounters a female fin whale and her calf, bringing the number of fin whale calves seen this year in the Archipelago to two.

The beluga calving season is in full swing. On Tuesday, around a hundred belugas pass by Cacouna toward Île aux Lièvres. The group contains a large number of second- and third-year calves, known in French as bleuvets. The next day, a “big party” of white and grey belugas is observed foraging off Rivière-du-Loup. “We see a handful every day, but this morning, there were about thirty of them,” points out one observer. 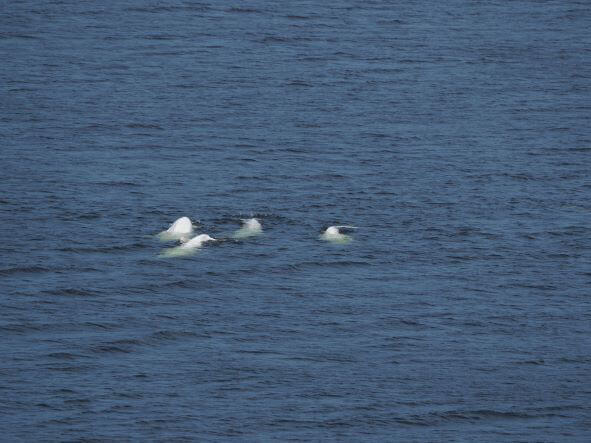 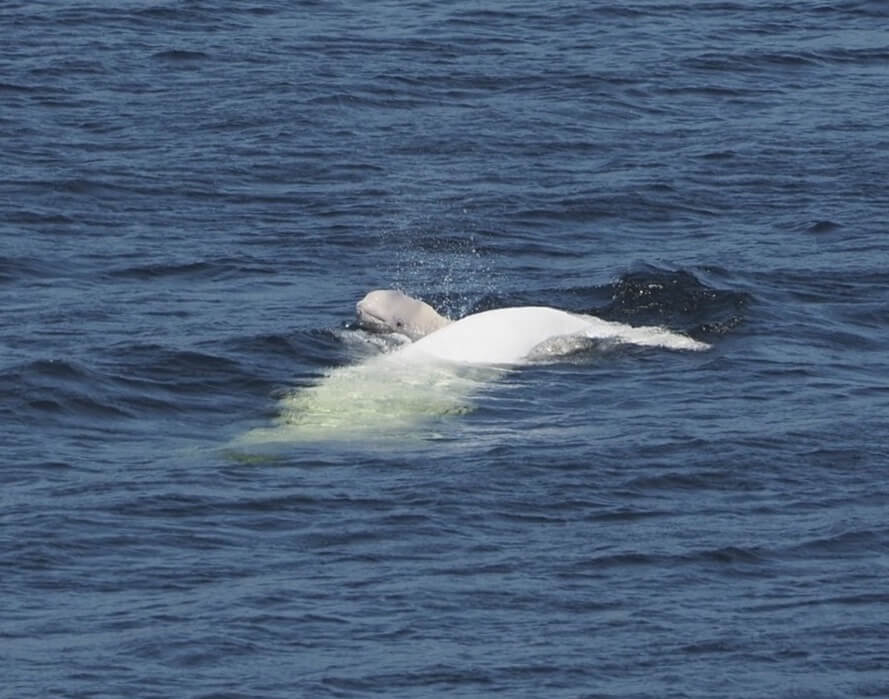 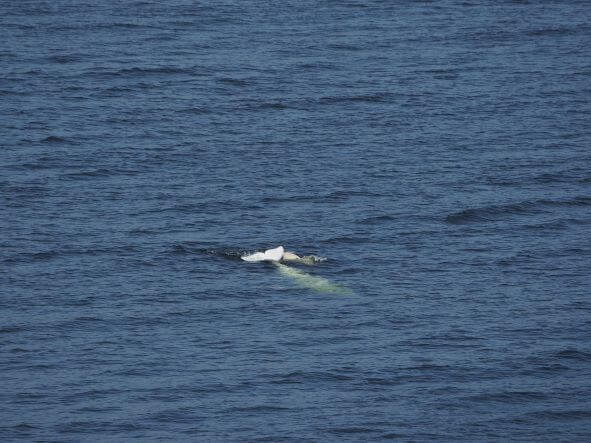 In the Saguenay as well, belugas have been passing by almost daily. A naturalist posted at the Pointe-Noire interpretation centre exclaims: “I’ve officially observed my first calf of the year! It was tiny; I even saw its fetal folds. We saw its beautiful little head emerge from the water with its eye and the characteristic “smirk” of belugas.

Every encounter is unique...

… and whales have the gift of bringing a touch of magic into our lives, regardless of their species or popularity rating. Like the two harbour porpoises that surprised a resident of Saint-Irénée on Sunday, or the fin whale just off the Baie-des-Sables wharf at 6 in the morning, a real treat for early risers. Or this testimony: “I was sitting on the rocks at the Remorqueurs wharf in Sept-Îles, opposite the island of La Grande Basque when suddenly, about 15 metres away, a minke whale appeared. Wow, what a surprise!” 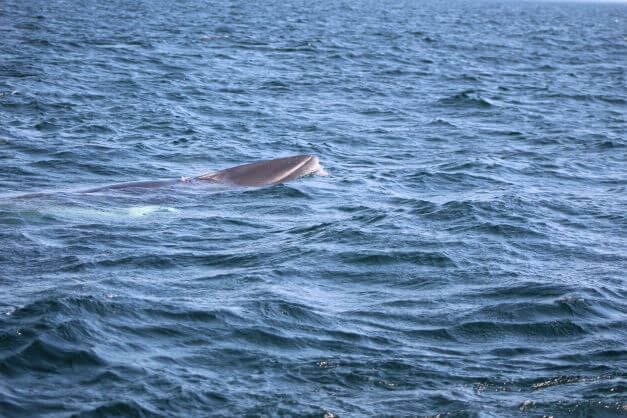 Minke whales come very close to the shore, much to the delight of observers. © Aurélie Villeneuve

Action at the gates of the Estuary and Cap Gaspé

After a week of pure madness off Godbout and Pointe-des-Monts, where residents reported groups of large rorquals dozens strong, things have calmed down. “Saturday night, we had a mind-blowing spectacle: tail slapping, pectoral slapping, breaches!” says one chalet owner. Since yesterday, we have not seen any large spouts offshore, though we did have at least twenty minke whales that entered the bay to feed.” 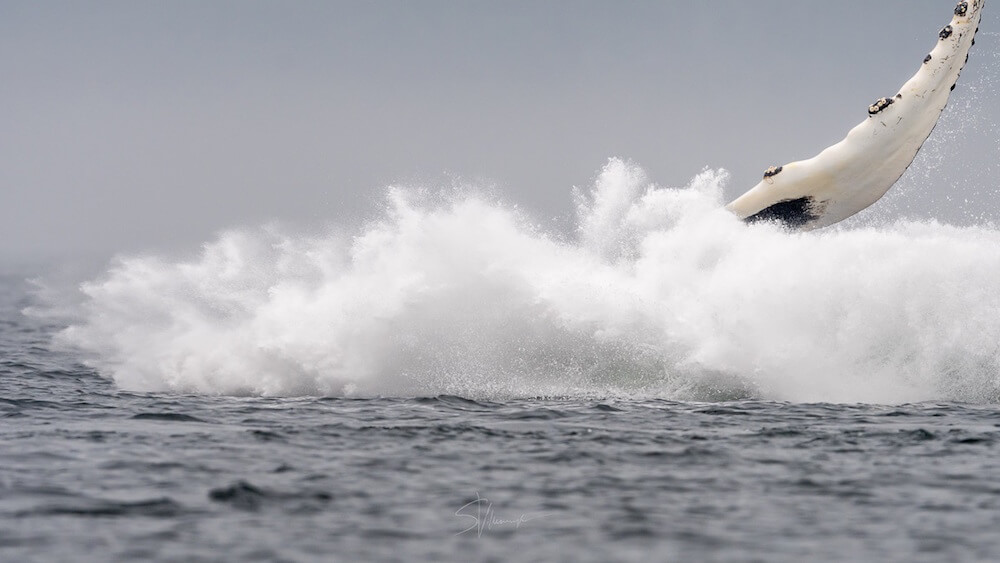 Near Sept-Îles, one mariner tallies four fin whales, a few humpbacks, many minke whales and numerous porpoises in a single outing. Lastly, at the entrance to Gaspé Bay, an observer reports on Wednesday morning a pod of 50 to 100 Atlantic white-sided dolphins. A few hours later, a tour boat finds itself in the middle of a group of seven or eight humpbacks. Over the weekend, a blue whale was even seen off Cap Gaspé. “Minke whales and porpoises are also very present, but no fin whales for a good week now,” says our observer.

On July 28, the GREMM research team was on its way home aboard the BpJAM when it was blown away by an “extraordinary” sighting: A fin whale (we’re talking here about the second largest animal ever to have roamed planet Earth!) hurls itself into the air in a monumental breach. Taken aback, the team members didn’t think they would be quick enough to capture the moment, and yet… Here’s the photo that was just downloaded from their camera. Impressive, isn’t it? 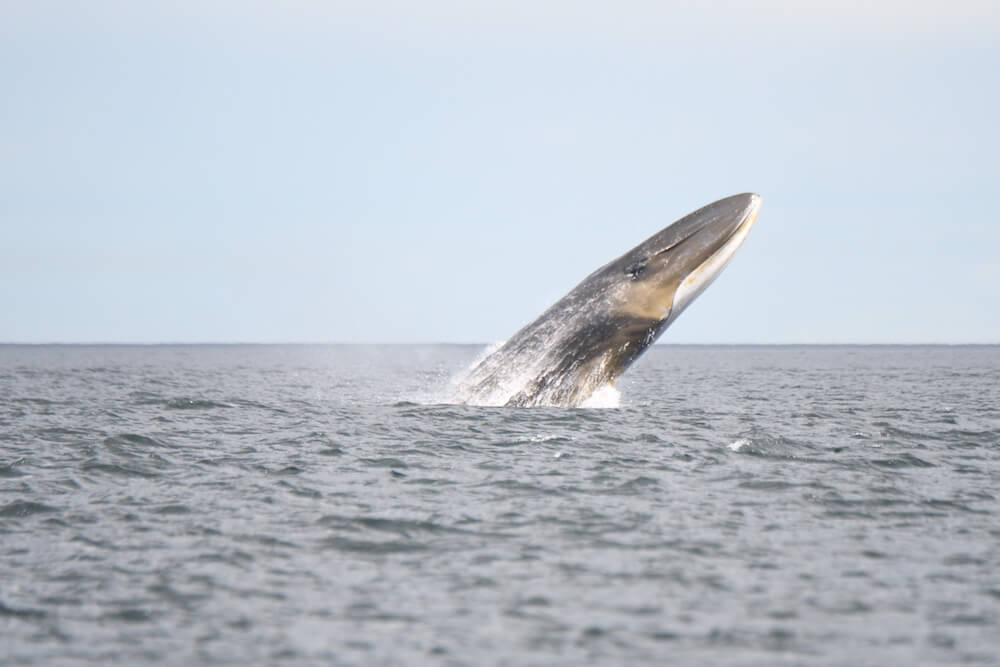 A very rare aerial behavior in this species © GREMM 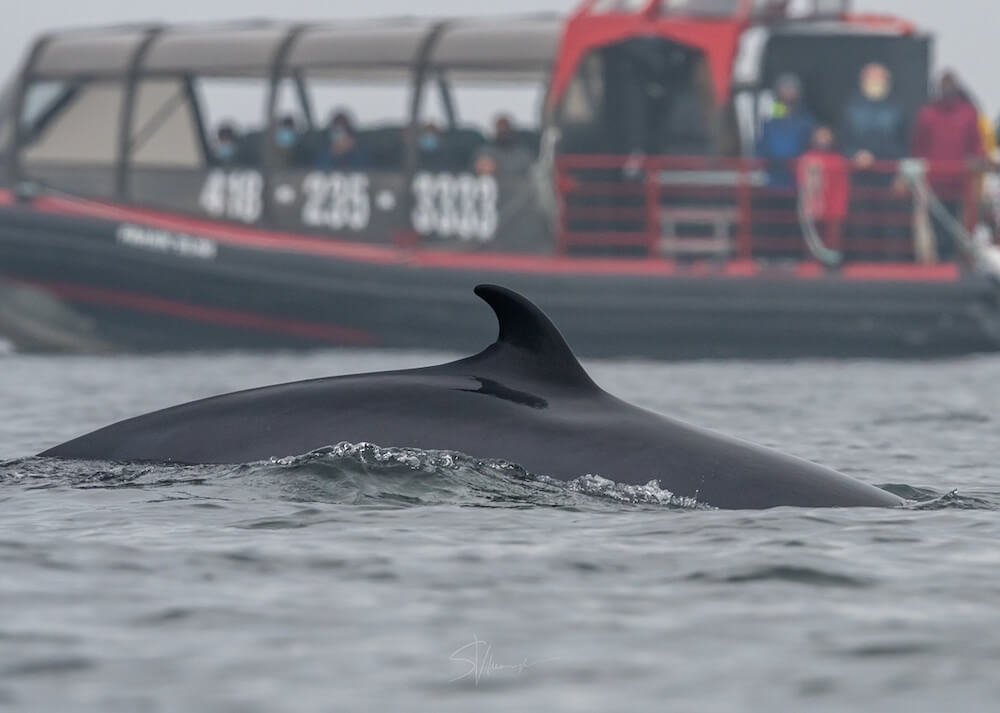 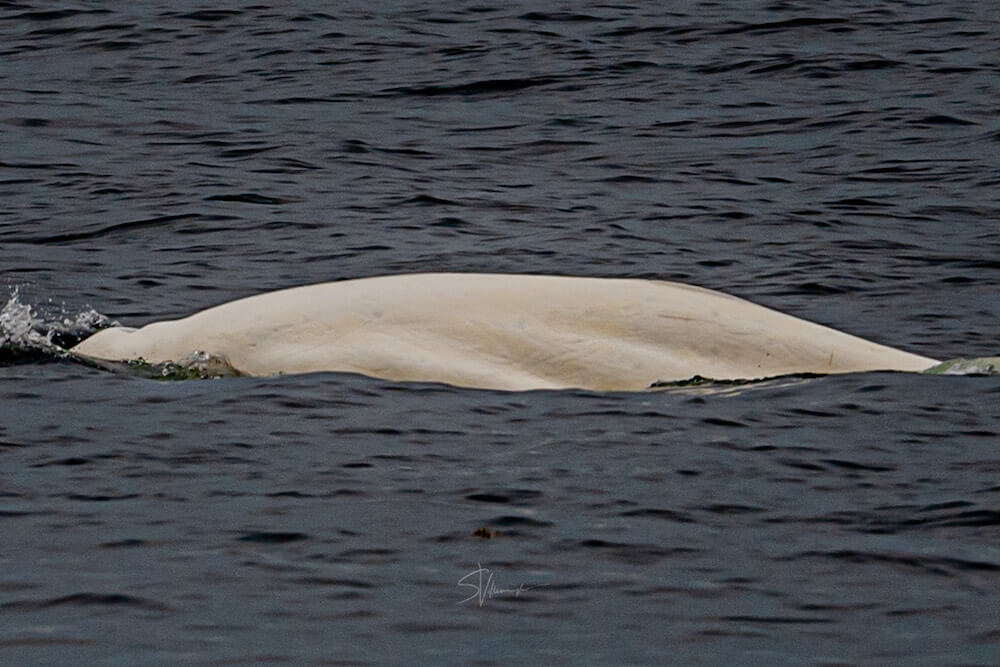 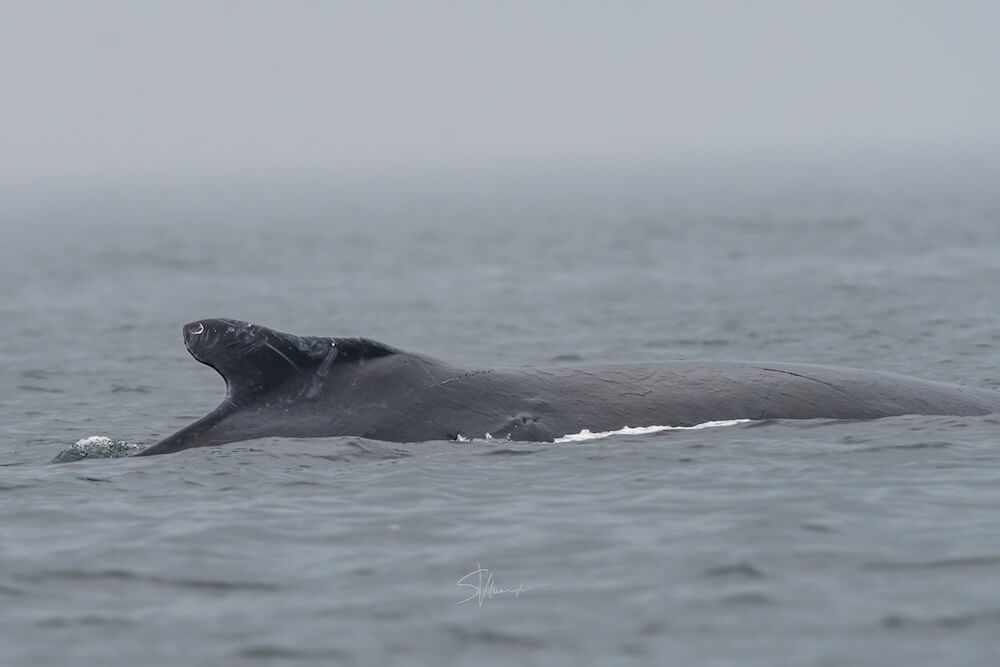 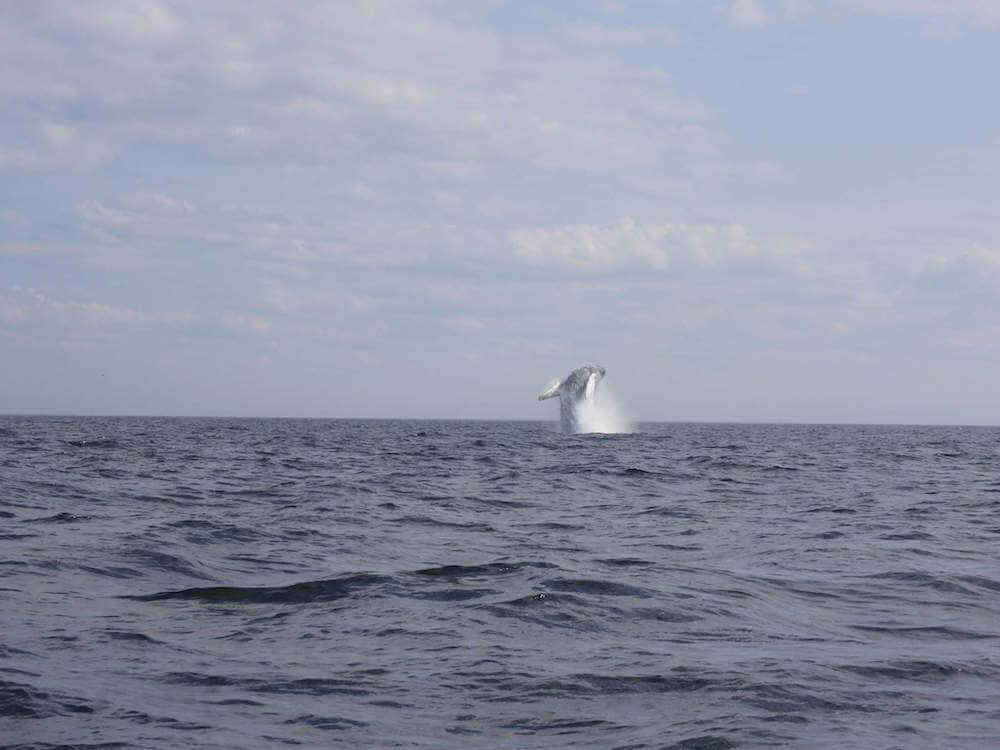 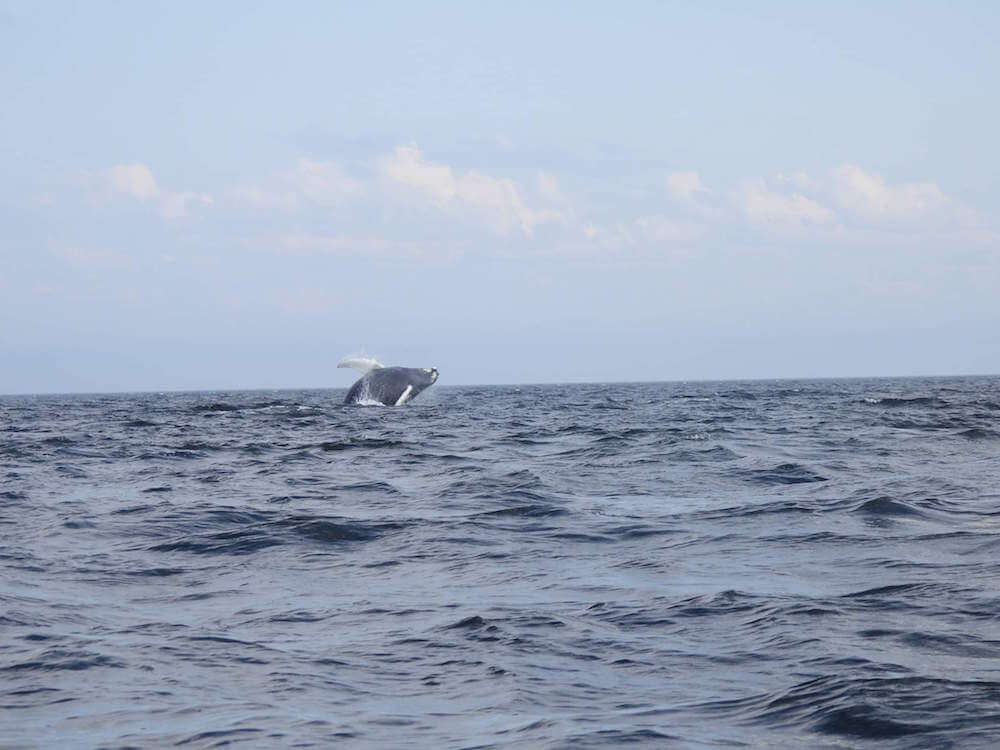 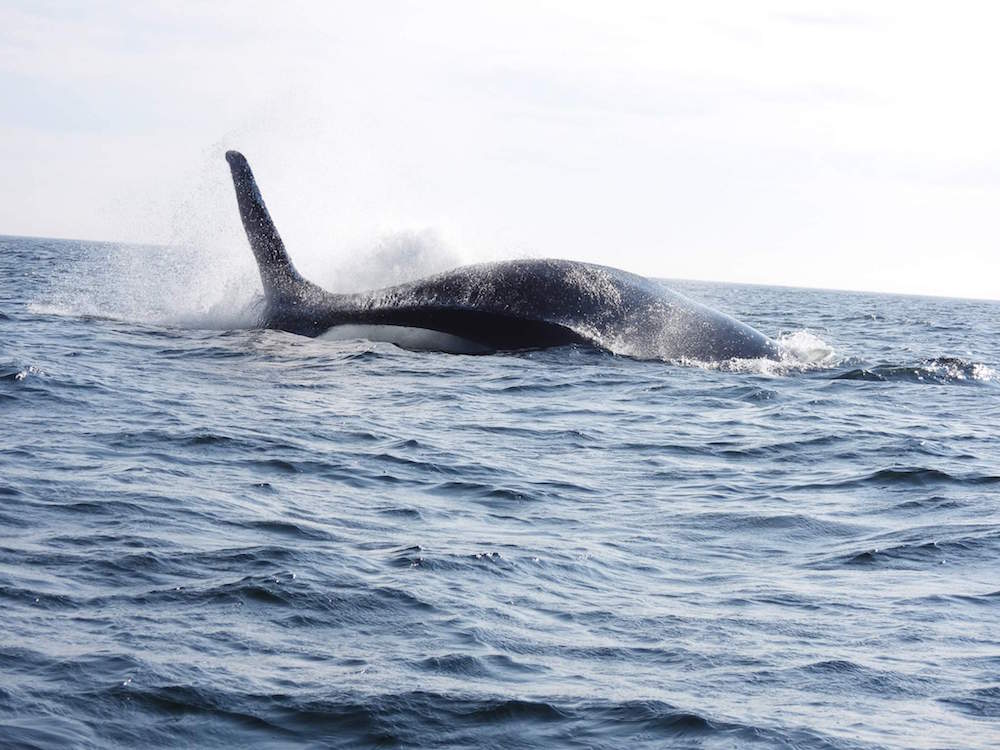 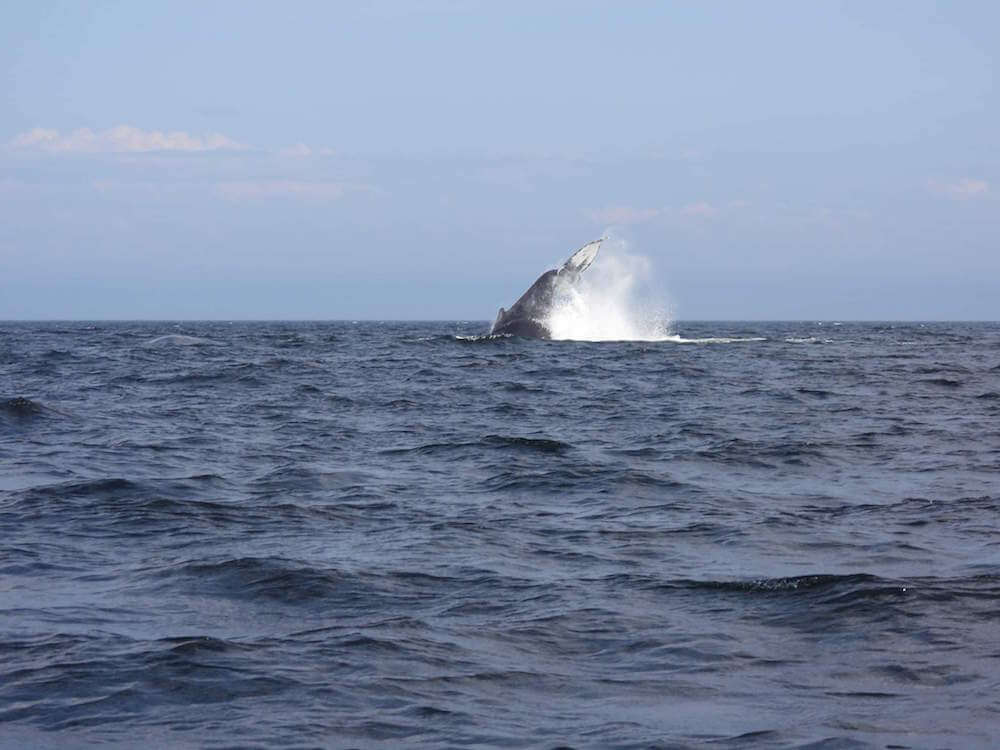 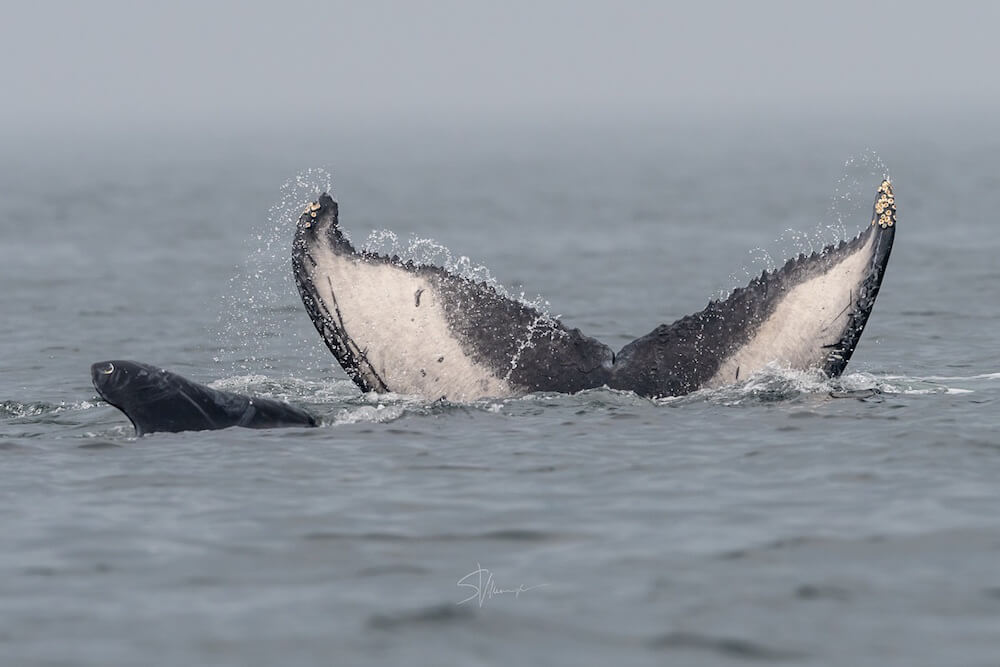 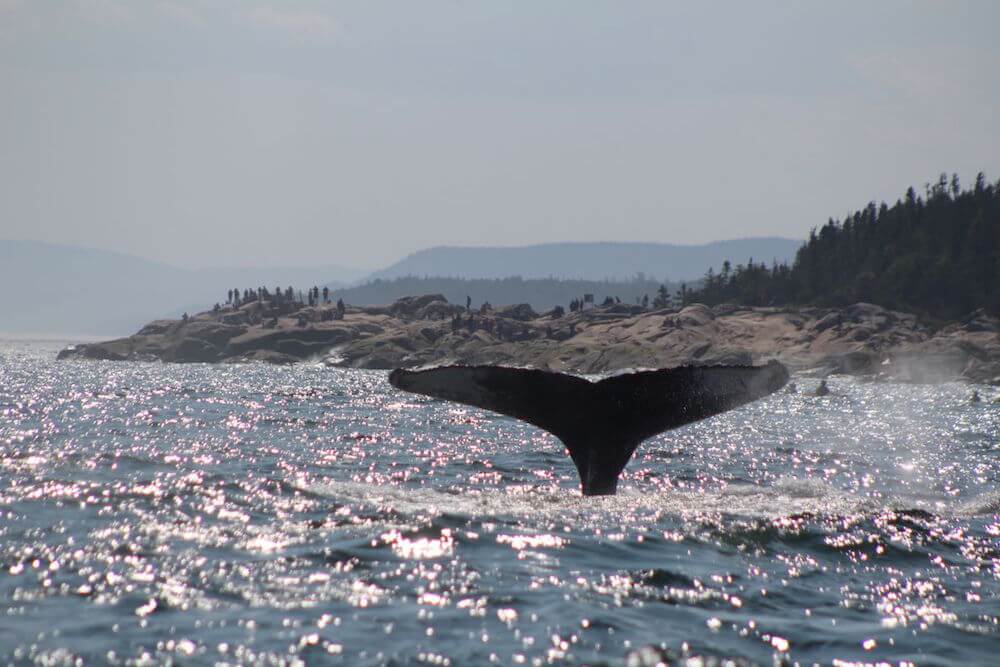 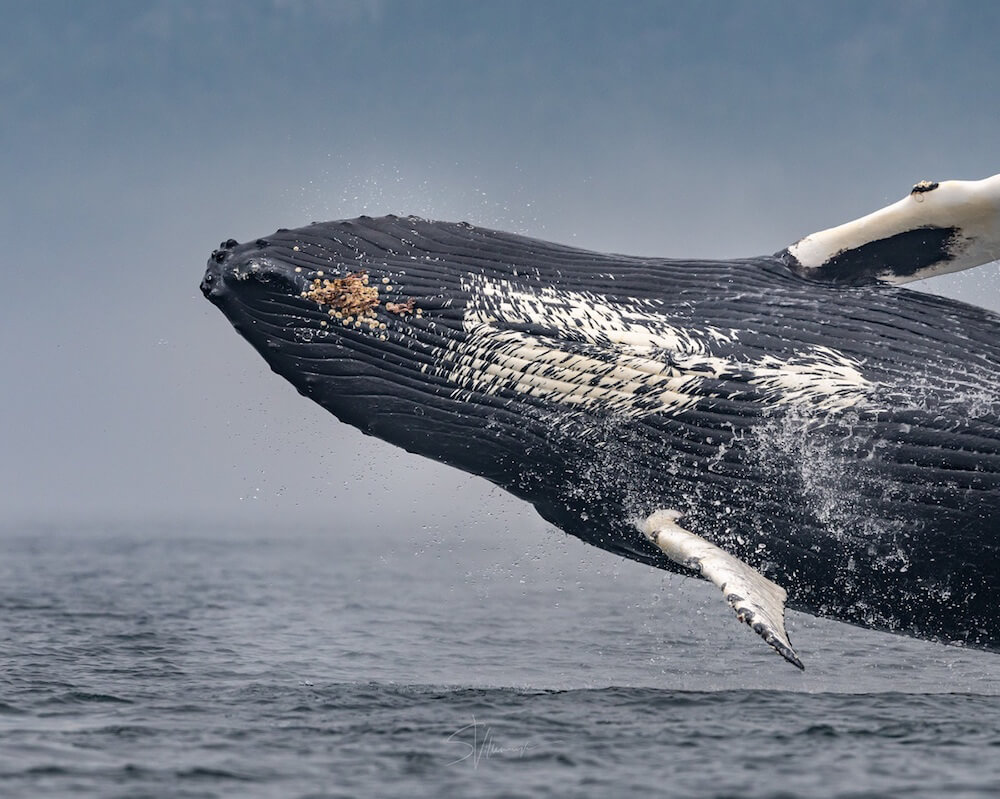 Click on the whale or seal icons to see the species, number of individuals observed, additional information or photos of the sighting.  To zoom in on the map, click on the icon in the upper right corner. The map works well on Chrome and Firefox, but less so on Safari.